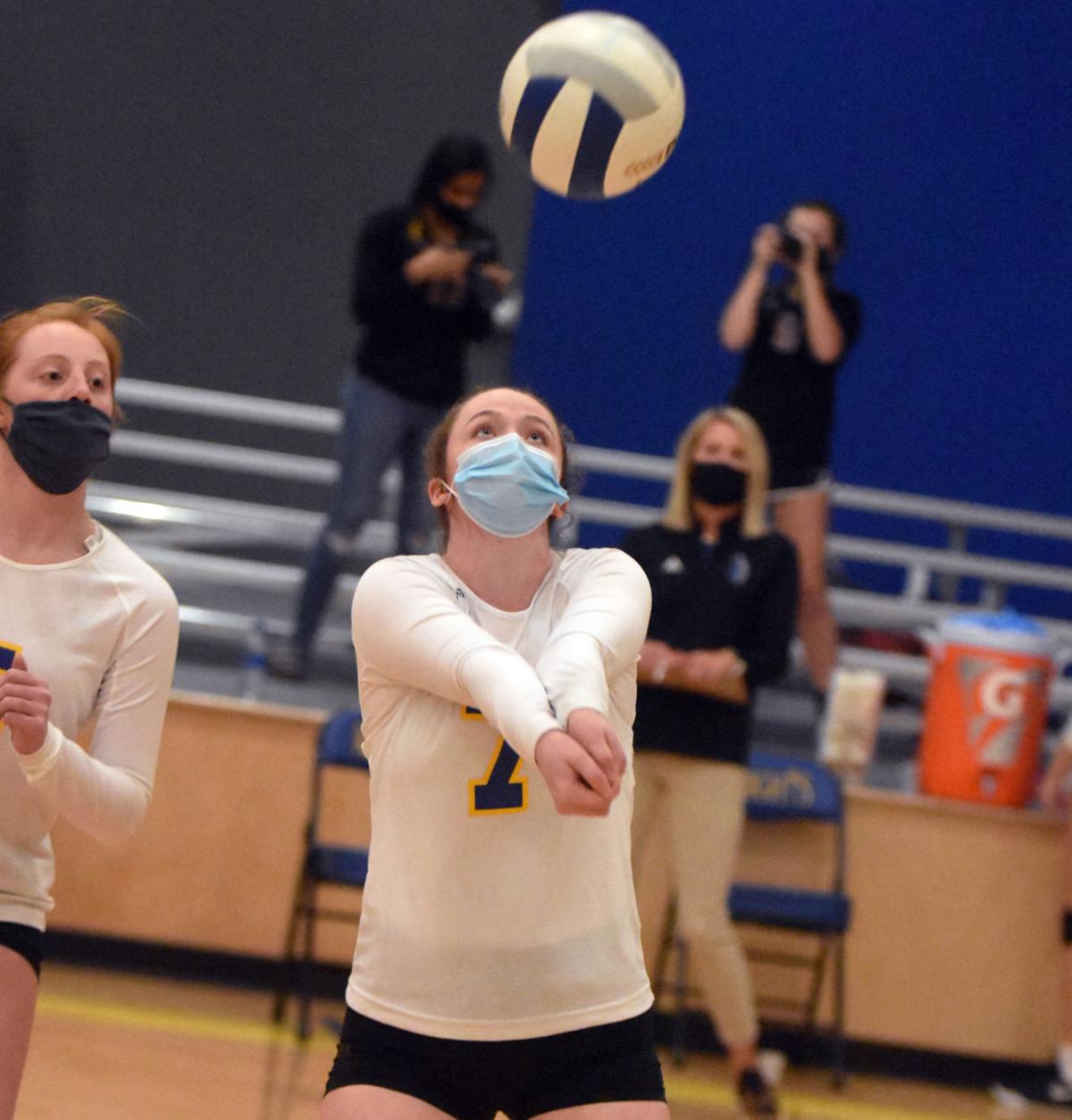 Vance Charter volleyball player Savannah Ayscue (7) knocks the ball up into the air while her teammate Ellie Atkinson (left) watches during their team’s 3-0 victory over Oxford Prep. 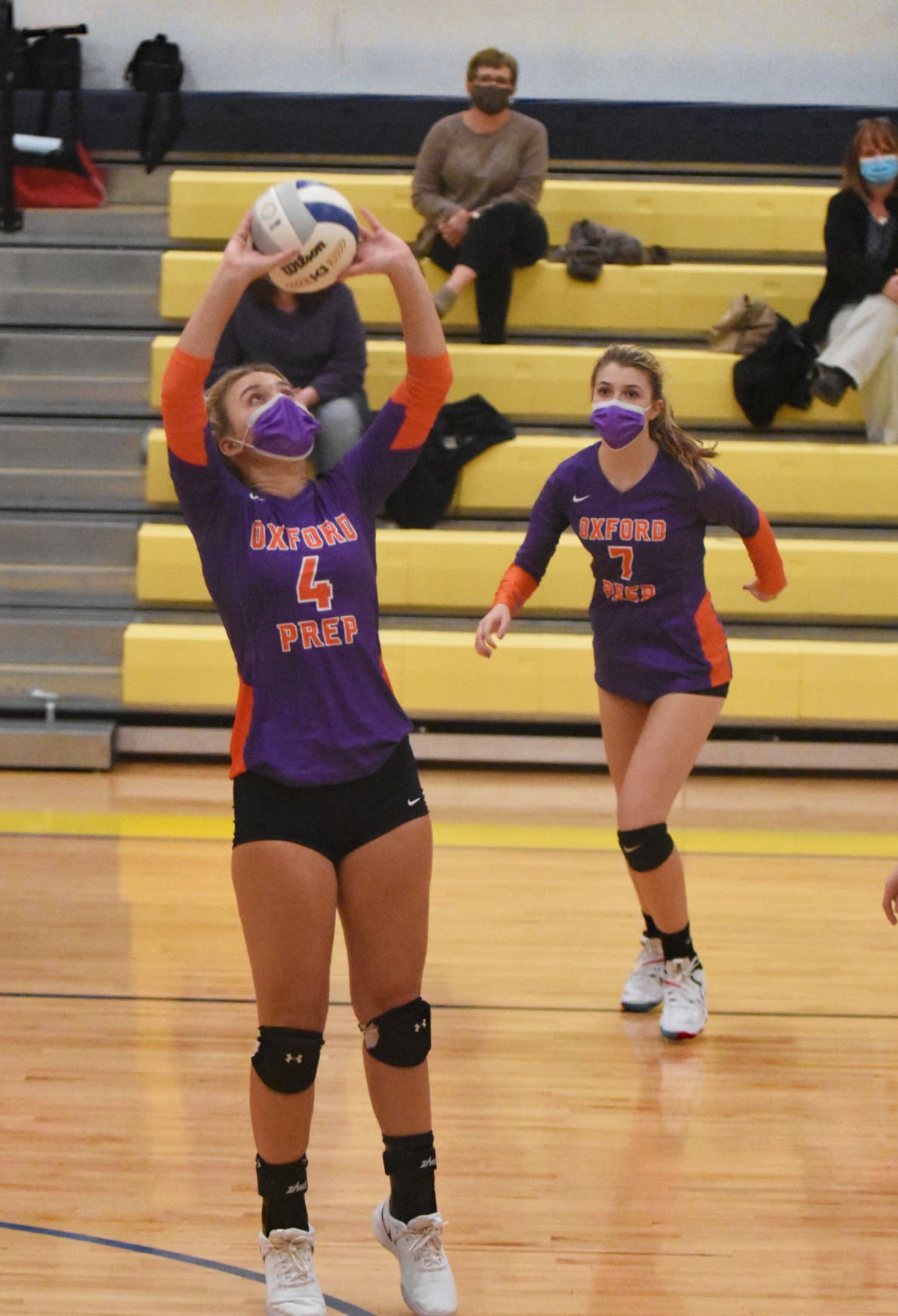 Oxford Prep volleyball player McKayla Boyd (4) makes a play on the ball while her teammate Samantha Huff (7) gets into position during their team’s 3-0 loss to Vance Charter on Wednesday evening.

Vance Charter volleyball player Savannah Ayscue (7) knocks the ball up into the air while her teammate Ellie Atkinson (left) watches during their team’s 3-0 victory over Oxford Prep.

Oxford Prep volleyball player McKayla Boyd (4) makes a play on the ball while her teammate Samantha Huff (7) gets into position during their team’s 3-0 loss to Vance Charter on Wednesday evening.

HENDERSON — A new era of volleyball at Vance Charter began at the school on Wednesday evening, as the program engaged in an intense battle with Oxford Prep that ended in a 3-0 victory for Vance Charter.

The matchup with Oxford Prep was the first for new Vance Charter head coach Anna Stallings, who praised her players for keeping their composure through all three sets against Oxford Prep to come away with a season-opening win.

“I’m very proud of them,” Stallings said. “Everyone did a great job tonight. This is the first time this team has been together on the court with me as their coach, and everything ended up going great.”

Vance Charter and Oxford Prep opened the game by exchanging numerous leads and ties until Stallings’ team settled into a rhythm and pulled ahead with a 9-4 advantage that forced Oxford Prep head coach April Abbott to use an early timeout.

After seeing their deficit to Vance Charter increase further, Oxford Prep found some momentum and proceeded to go on a run, but it was not enough, as the Knights took an early lead with a 25-19 victory in the first set.

The second set would not be as favorable to Vance Charter, thanks to Oxford Prep’s aggression. The two sides took turns holding the lead for significant periods of time, but a late timeout by Stallings was enough for the Knights to regain their focus and close out with a 25-23 win.

Despite being down 2-0, Oxford Prep showed no signs of slowing down and did everything possible to extend the game against Vance Charter in the third set. But another late run from Vance Charter allowed them to claim the set by a score of 25-23, and with it the match win.

Abbott said the overall outcome might have favored Oxford Prep if her players were more consistent at the beginning of each set in regards to chemistry and defense. But she felt her team showcased its potential throughout the evening and is optimistic about the program’s chances to win games this year.

“The girls definitely came out to play towards the later parts of the game,” Abbott said. “I think everyone’s nerves were getting the best of them at the beginning. We see some of our weaknesses and we plan to work on that. If we can fix those issues, then it will be a much better season than anticipated.”

Stallings said Wednesday’s game allowed her to observe which players work together the best out on the court. While she didn’t think the outing was perfect, she believes Vance Charter will be in contention to win as long as her squad polishes some of the minor issues holding them back.

“Our communication was good even though they had something covering their face,” Stallings said. “We talked a lot about how trying to speak to each other with a mask on was going to be a big challenge, but they did a good job of handling that. We just need to work on our defense more.”

Vance Charter will try to improve to 2-0 on the year this evening when it travels to face Falls Lake Academy at 4:30 p.m. Oxford Prep is also back in action today with a match on the road against Roxboro Community that will start at 6 p.m.