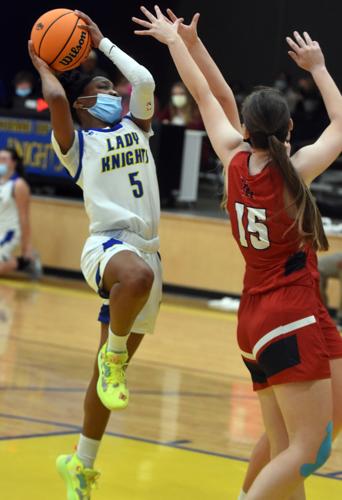 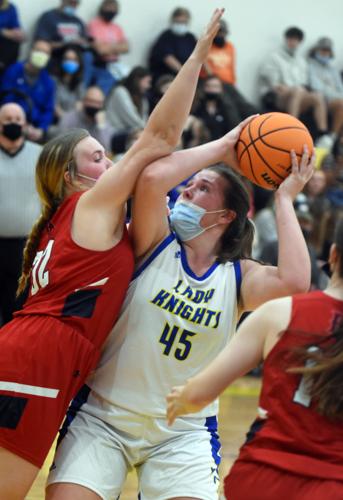 Vance Charter's Gracie Reese (45) is challenged by a Franklin Academy defender underneath the rim during her team's 46-20 victory on Monday evening.

Vance Charter's Gracie Reese (45) is challenged by a Franklin Academy defender underneath the rim during her team's 46-20 victory on Monday evening.

Following a slow opening stretch, the Knights offense came to life in the second quarter to secure a dominant 46-20 victory, accomplishing that without one of their top contributors, senior Kyiah Simmons, who was injured on Friday against Falls Lake

Although head coach Brian Howard did not think Monday’s outing was perfect, he said that the victory showcased the resilience of his players along with their ability to adapt in Simmons’ absence.

“We fought hard,” Howard said. “Right now, we’re going through a lot of nagging injuries. We’re going to miss Kyiah for a little bit, so coming off two very tough games against two of the best teams in our area in J.F. Webb and Falls Lake with a strong rebound [on Monday] was great. Our girls came in with a lot of confidence and were ready to play.”

With Simmons expected to be out for a few games, Howard wanted to see more players on the roster step up on both ends of the floor to complement the production of Vance Charter’s senior leaders, Kayla Simmons and Allie Bliss.

Howard felt that senior Bailey Daeke effectively filled in for Kyiah Simmons underneath the rim on Monday evening, but he also praised junior Gracie Reese for the physicality she displayed against Franklin Academy’s defense.

Despite winning by 26 points, Howard said that the margin could have been much wider if the Knights had capitalized on the second-chance opportunities that Franklin Academy provided them.

Defense was another area for concern, but Howard intends to address those issues in practice so that Vance Charter will be more prepared to face tough in-conference competition like Voyager, Roxboro Community and Eno River.

Improving under the rim “comes from repetition,” Howard said. “I also want to strengthen our defense a little bit more because I felt [Franklin Academy] got a couple of easy baskets on us. They didn’t score a whole lot on us, but I still don’t like some of the looks they got. We’ll sharpen those things up and go from there.”

Vance Charter faced Research Triangle on Tuesday evening before regrouping ahead of its rematch at Falls Lake on Friday at 6 p.m., where they will look to avenge a 55-44 defeat from the week before.