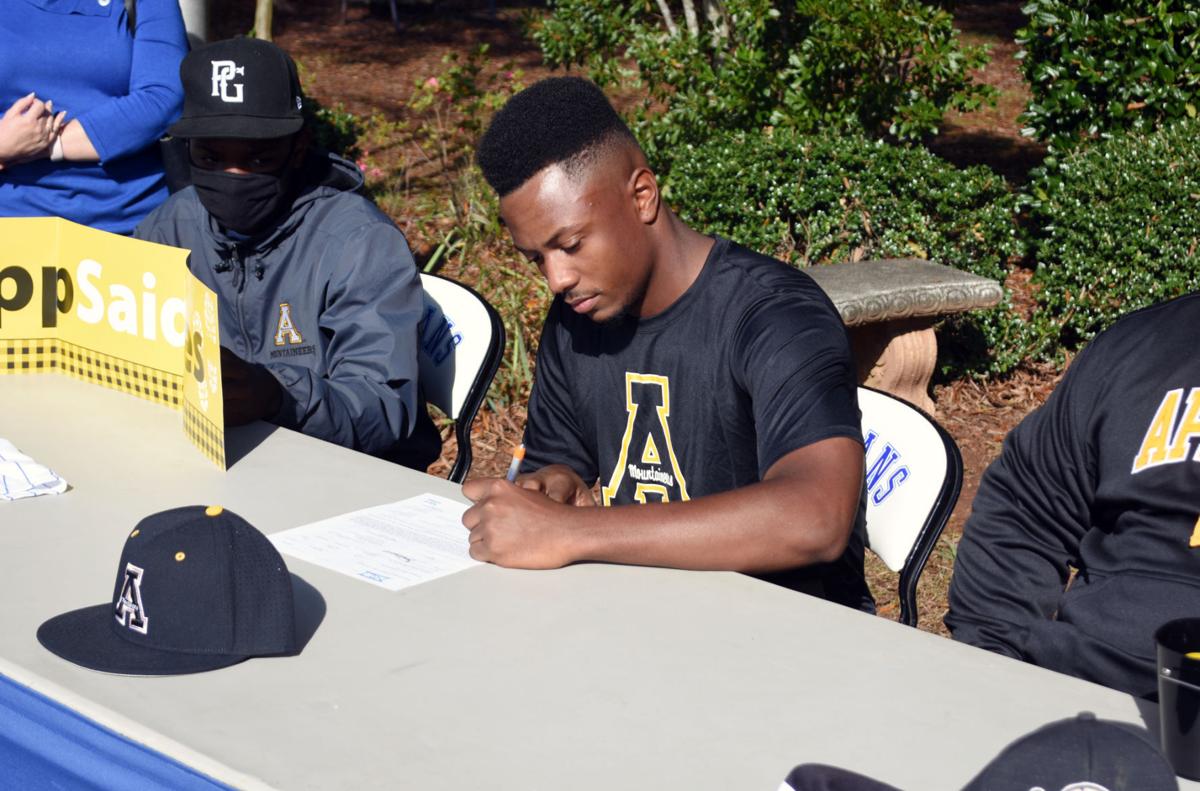 Kerr-Vance Academy baseball player R.J. Johnson, center, signs his letter of intent to play for Appalachian State University beginning in the spring of 2022 during a ceremony on Friday afternoon. Johnson has been a key component of KVA’s success during the late 2010s, as he helped the school win three consecutive state titles from 2017-2019. 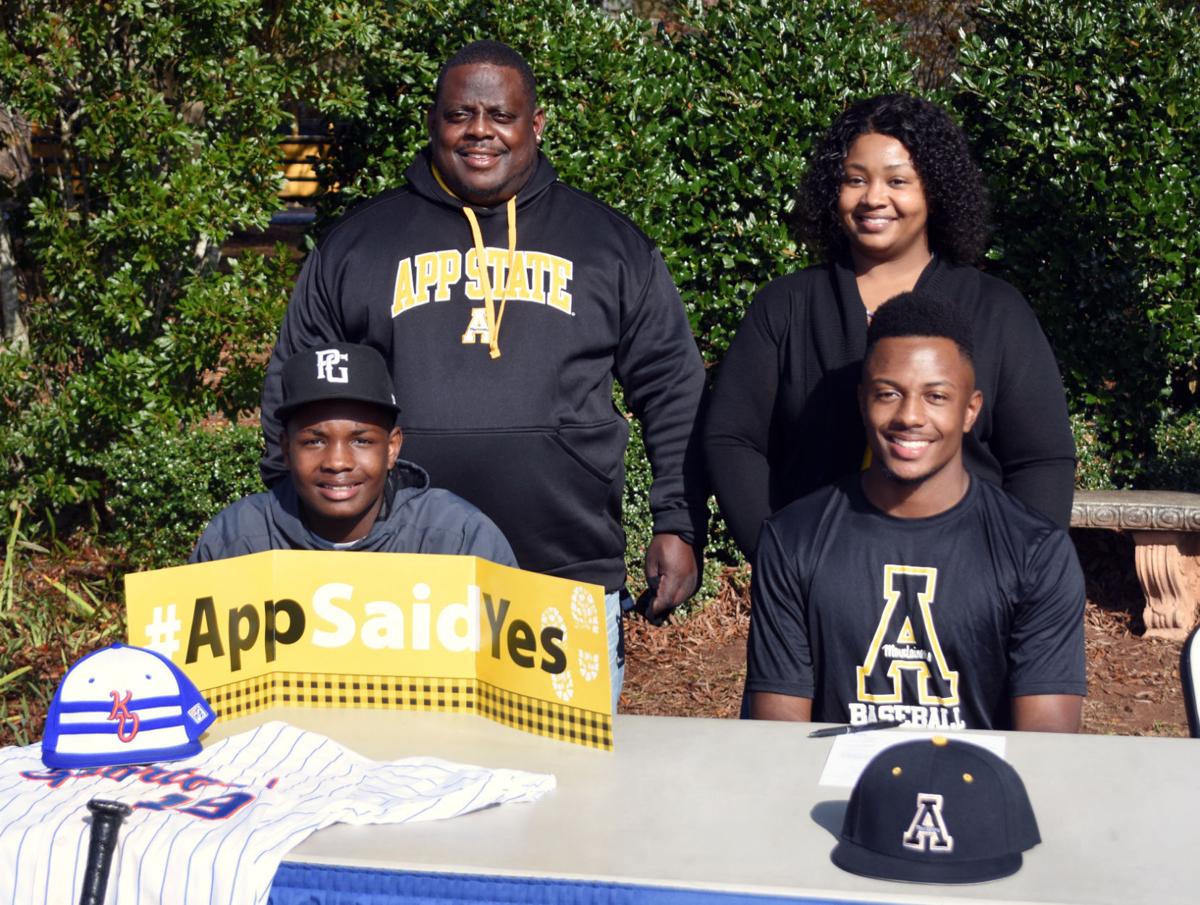 Kerr-Vance Academy baseball player R.J. Johnson, center, signs his letter of intent to play for Appalachian State University beginning in the spring of 2022 during a ceremony on Friday afternoon. Johnson has been a key component of KVA’s success during the late 2010s, as he helped the school win three consecutive state titles from 2017-2019.

HENDERSON — In a socially distant ceremony organized by the school, Kerr-Vance Academy baseball player R.J. Johnson on Friday signed his letter of intent to play for Appalachian State University beginning in the spring of 2022.

Johnson has emerged as one of the primary contributors on KVA’s baseball program, and he is looking forward to carrying on what he learned from head coach Todd Wilkerson and others as he prepares to start his collegiate career.

“Today was a good day,” Johnson said. “I finally got to accomplish one of my life goals by playing college baseball, and now it’s on to the next chapter.”

Since his childhood, Johnson has possessed an immense passion for sports, and spent most of his time playing football and basketball while also developing his talents as a baseball player with the Bandits, a travel ball organization led by John Garrett.

Through Garrett’s tutelage, he began to understand what was needed to exceed at the top level of baseball, which motivated him to pursue a career in the sport and end what had been a cumbersome football experience up to that point in his life.

“I was getting hit a little too hard in football,” Johnson said. “I didn’t have a good team either, so I started playing baseball and basketball, but this year I gave up basketball so I could get stronger and possibly see the field as a freshman at App State and make a big impact for the team.”

R.J.’s father, Reginald Johnson, was hoping to see his son become a successful football player, but he praised his son for his dedication to improving his performance in baseball, and is confident he will continue to be efficient at the sport for many years to come.

“I figured out that if you push a kid to do something they don’t want to do, they’re not going to give it their all,” Reginald Johnson said. “He started playing baseball, he gave it his all and everything took off from there. I’m so proud of him and hopefully with the air being a little thinner at App State he can hit a few more home runs up there.”

R.J. joined KVA’s baseball program when he was in the eighth grade and made an immediate impact by notching 14 runs, 15 RBIs, four doubles and two triples. He improved on those numbers during his freshman year with two home runs to go along with 24 runs and 24 RBIs.

His consistency and that of his teammates helped KVA earn NCISAA 1A championships in 2017 and 2018. The status quo continued for KVA in 2019 as R.J. took on a more expanded role to lead the program to a 16-5 overall record and a third consecutive state title with two dominant victories over Albemarle School.

Wilkerson is no stranger to seeing his players gain recognition for their talents, with his own son Colby set to start playing baseball for UNC Chapel Hill in 2021, and considers Johnson another proud representative of the KVA baseball program in regards to academic and athletic success.

“He’s gotten bigger, stronger and faster these past few years,” Wilkerson said. “He hits the ball really well, but he’s matured a lot too. I’m expecting him to step up and be a leader for the younger guys this year, and I also think that he’s going to do just fine at App State.”

After watching Colby Wilkerson sign his letter of intent to play for UNC Chapel Hill a year earlier, Johnson said that he spent extra time fine-tuning his technique to prepare for a junior season that was ultimately cut short by the COVID-19 pandemic. He now enters his final year more confident in his ability to perform.

Johnson is eagerly looking forward to completing another full season and adding another NCISAA 1A championship to KVA’s ledger, and is optimistic that he can help elevate his future teammates at Appalachian State as soon as he joins their program.

“Hopefully we can win another state championship,” Johnson said. “I want to help my team get better every day. I would love to win a Sun Belt Championship once I get to App State, because that’s a really strong baseball conference. But obviously the main goal is to make it all the way to Omaha [to the College World Series].”