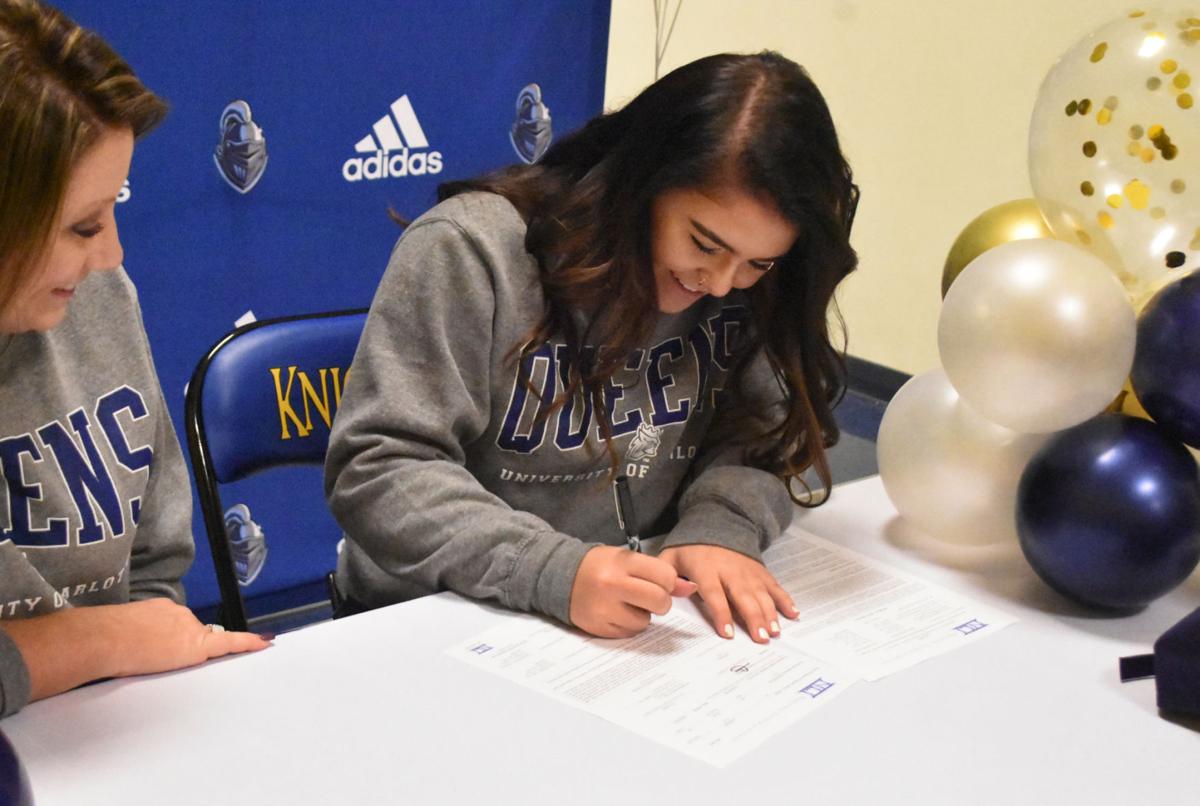 Vance Charter softball player Jordan Dunn signs her letter of intent to play for Queens University on Friday during a special ceremony at the school. Dunn will join the Queens squad for the 2022 season. 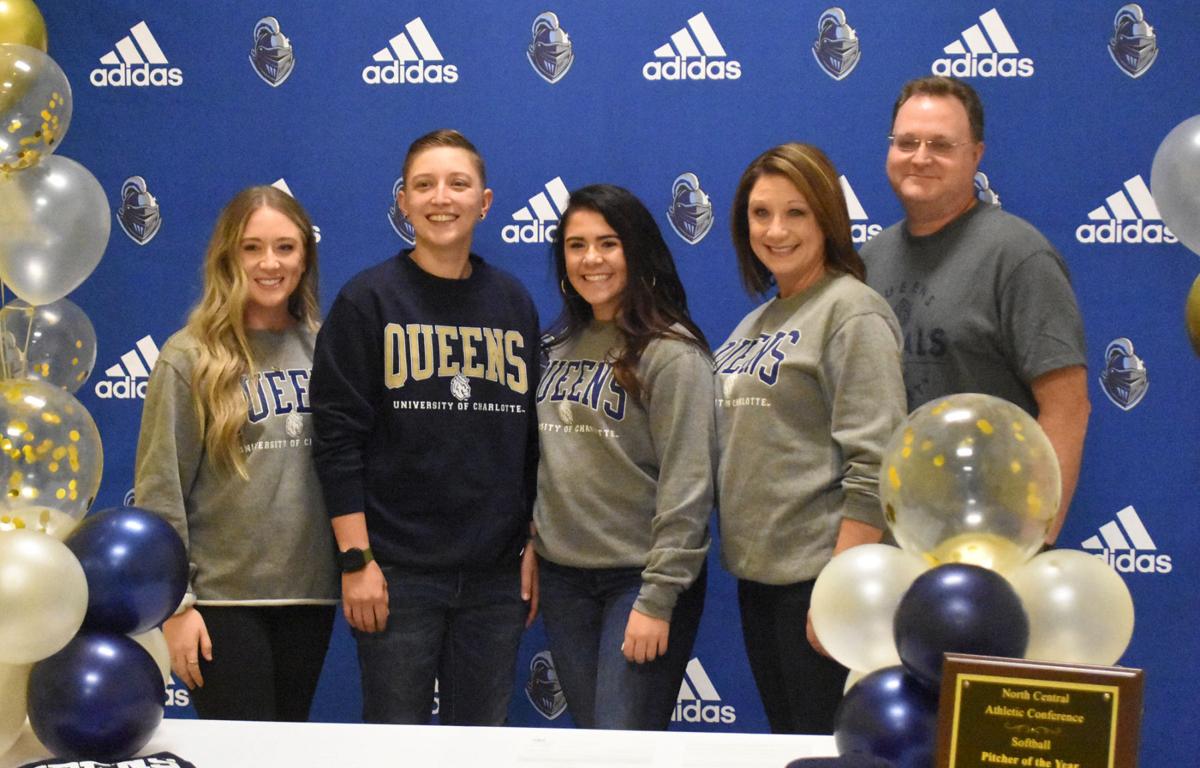 Vance Charter softball player Jordan Dunn signs her letter of intent to play for Queens University on Friday during a special ceremony at the school. Dunn will join the Queens squad for the 2022 season.

HENDERSON — A small crowd gathered at Vance Charter School on Friday afternoon to watch softball player Jordan Dunn sign her letter of intent to play for Queens University starting in 2022.

Dunn believed that Queens was a perfect school to attend after visiting the campus and talking with the coaches on the softball program. She said she hopes to immediately contribute for the team as soon as she graduates from Vance Charter.

“It was very exciting even though I’m a little nervous at the thought of moving away and playing with new coaches and players,” Dunn said. “I’ve looked forward to this since I started playing softball when I was 8. I know a few people that play at Queens, so it will be like a home away from home.”

Softball is a major part of Dunn’s family, as she first visited the ballfield when she was 3 months old and watched her sisters Lauren and Allison develop successful careers in the sport, which eventually motivated Dunn to start playing herself.

Dunn fully committed herself to softball by building a regimen that includes pitching three days a week and participating in several recreational and travel-ball leagues, which helped prepare her as she joined Oxford Prep’s varsity program as a freshman in 2018.

She transferred from Oxford Prep to a stout Vance Charter program for her junior campaign, where she helped lead the team to a 2-2 record until the onset of the COVID-19 pandemic prompted the cancellation of the season.

Vance Charter assistant coach Joe Don Cooper, who also guided Dunn in travel ball and Oxford Prep’s middle-school team, was thrilled to see her hard work pay off with a scholarship. He is confident that the consistency she has established over the past several years will carry over into college.

“I’ve had the privilege of knowing Jordan for a long time and she has been a delight to coach,” Cooper said. “Jordan is a coach’s player. She’s great to have on your team and she always shows up ready to practice. She was born with God-given ability, but I’ve watched her hone it through the years to where it has developed her into a really great ball player.”

Dunn said she was thankful to play alongside talented teammates like seniors Micki Maxson, Skylar Aiken, Savannah Talley and others. She added that interacting with the seniors has helped her build more confidence ahead of her final high school season.

“The seniors really taught me to own who I am, how I play and allow that to carry me to higher levels,” Dunn said. “A lot of the girls that were seniors last year also signed to schools and one of them is going to be in my conference when I get to Queens, so they really helped me a lot last year.”

Dunn’s mother Sandi Lindsey has witnessed her daughter make numerous sacrifices to improve her performance and help those around her, and she attributes Dunn’s determination to the guidance and lessons she has received from Cooper, Vance Charter head coach Brian Bunn and so many others during her extensive softball career to date.

“Jordan has played travel softball all over the country and the self-discipline, dedication and the leadership skills a child gets from this type of opportunity is a once-in-a-lifetime thing,” Lindsey said. “They take those things through their entire adult life, and that just makes you a stronger person all the way around. She’s worked hard ever since she threw her first pitch at the Aycock [Recreation Center] in a game back in 2013.”

For her final high school season, Dunn is expected to take on a more expansive role as a pitcher for Vance Charter, where she will have the task of replacing Aiken, who led the team to 18 wins as a starter and capped off her final full-time season with an ERA of 2.88 in 2019.

Dunn pitched two games for Vance Charter in 2020 and recorded a 2-0 victory over Louisburg to end the shortened campaign. She also tallied four runs, two doubles, a triple and an RBI at the plate in four games.

She said her objectives for the 2021 season are to stay focused and help lead Vance Charter back to the NCHSAA 1A playoffs despite the roster turnover during the offseason. But she also wants to be both physically and mentally prepared for when she does start taking classes at Queens in less than a year.

“I want to be the best that I can be in all aspects,” Dunn said. “I want to be good at pitching and at any other position they put me at. I’m also looking forward to the rigorous coursework, which I think will teach me a lot about time management, but I’m also really excited about meeting new friends.”

Dunn plans to major in psychology and minor in business when she arrives at Queens in 2021, while also taking part in the physician assistant program at the school.