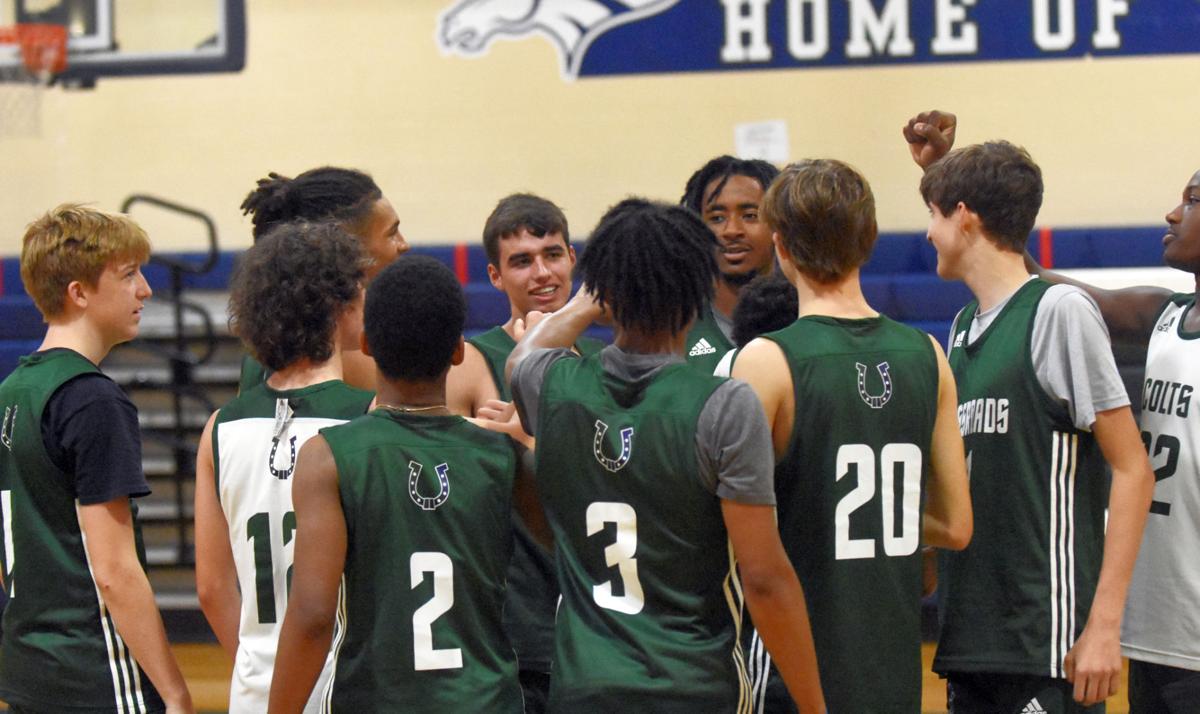 The Crossroads Christian men’s basketball team gathers at midcourt during a practice on Monday afternoon ahead of two Team Camps set to take place at UNC Charlotte and UNC Pembroke this week. 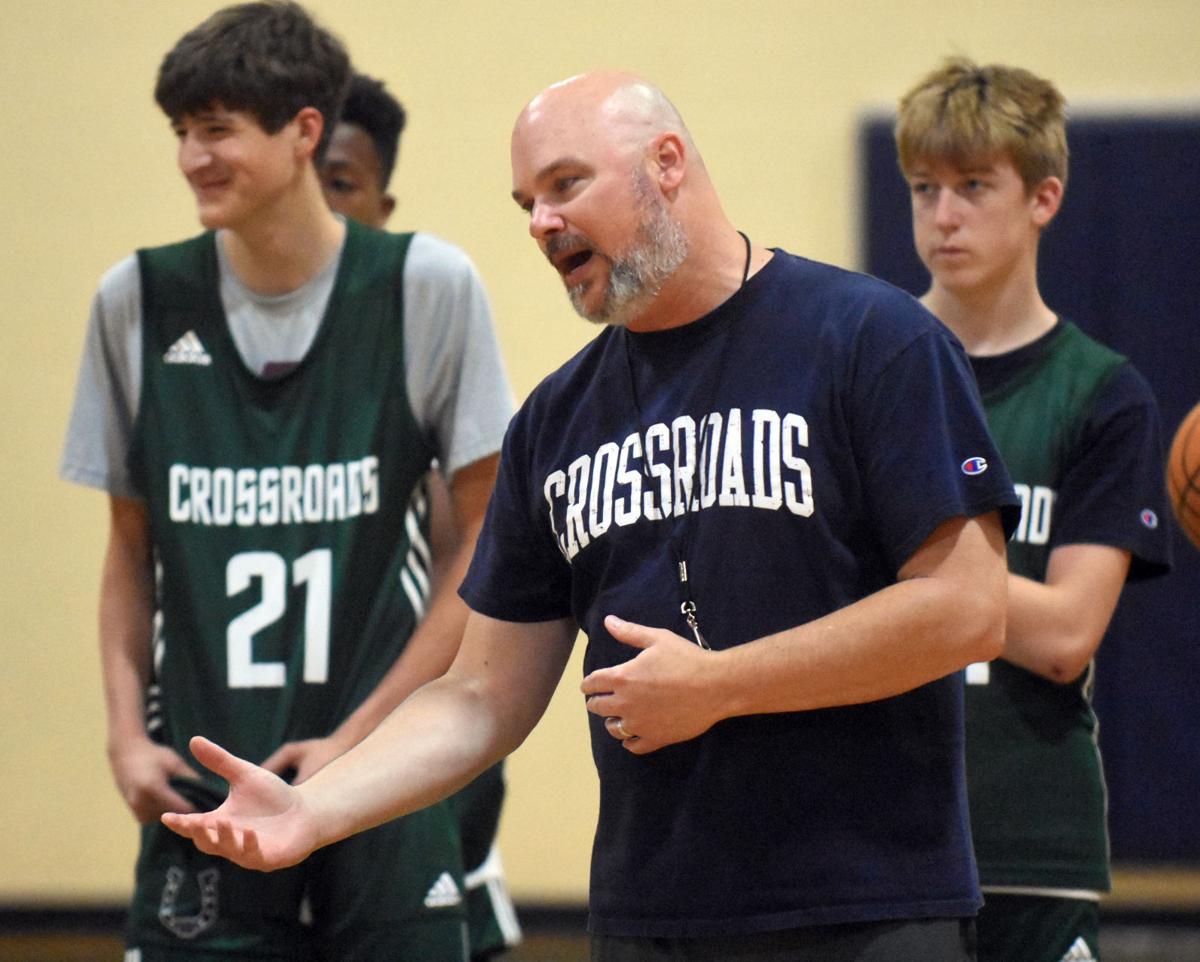 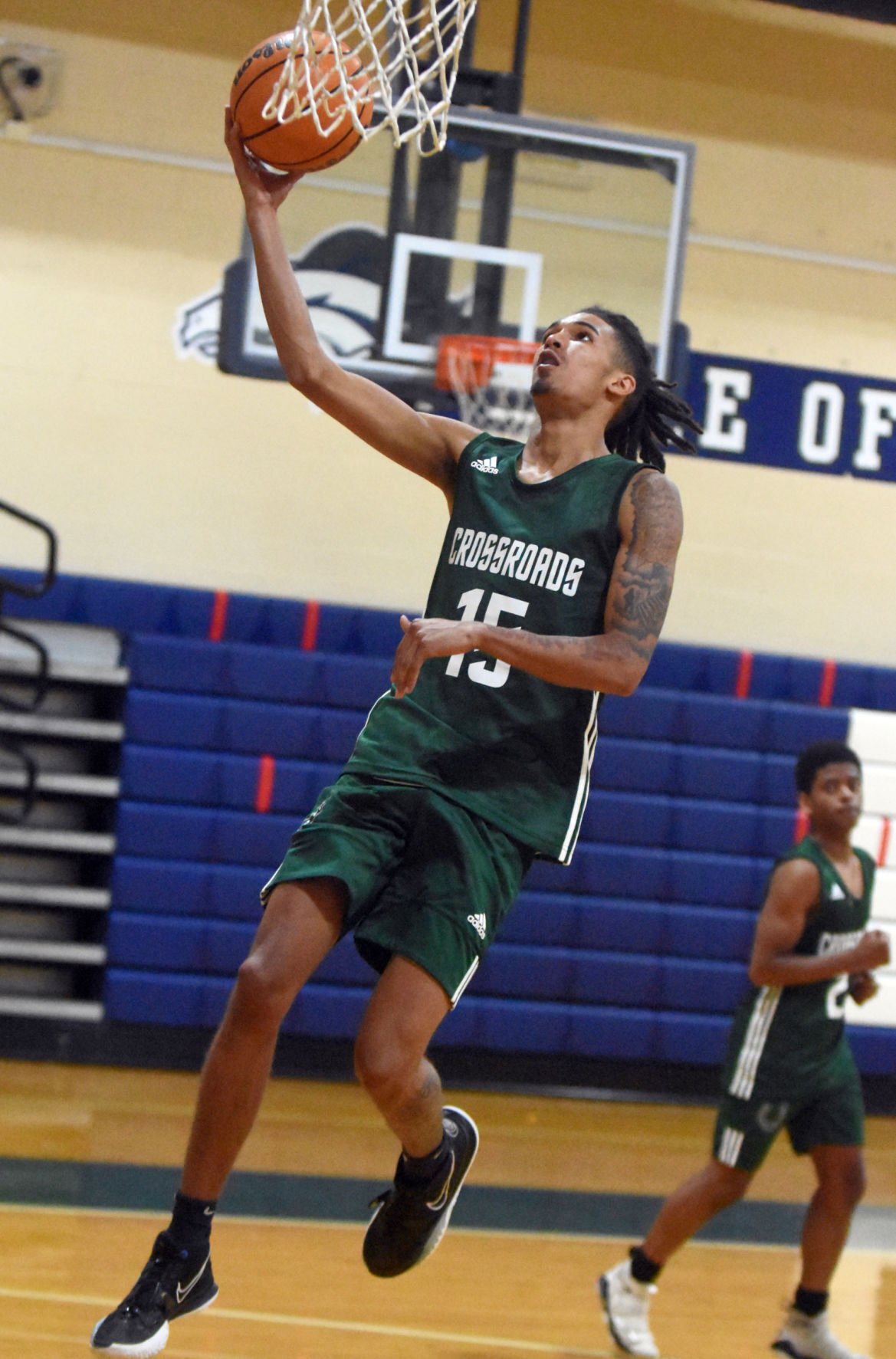 Crossroads Christian's Drew Rogers goes in for a layup during a practice at the school on Monday afternoon.

The Crossroads Christian men’s basketball team gathers at midcourt during a practice on Monday afternoon ahead of two Team Camps set to take place at UNC Charlotte and UNC Pembroke this week.

Crossroads Christian's Drew Rogers goes in for a layup during a practice at the school on Monday afternoon.

HENDERSON — With COVID-19 restrictions having eased across North Carolina, the Crossroads Christian men’s basketball team is moving forward with a rigorous offseason program to prepare for the 2021-22 season that includes two separate Team Camps this week.

Head coach Scottie Richardson said that the summer has always been crucial in gauging where his team is with the game plan, and is thankful to see those offseason traditions return now that the pandemic is less of a concern.

“We’ve had a good offseason and now here we are in June for the summer season,” Richardson said. “Right now it’s the calm before the storm, as we’re getting ready for Team Camp. We head down to UNC Charlotte for two days and then travel to UNC Pembroke for a day.”

The previous year was a tumultuous one for Richardson and his players, as they only participated in 15 games and finished with a 4-11 record due to COVID-19 issues that forced the team to regularly go in and out of quarantine.

Despite the end result, Richardson still had plenty of reasons to be happy about the 2020-21 season, with Crossroads advancing into the Elite 8 through the leadership of senior captain Asher Fulk and junior transfer duo of Drew Rogers and Andres Prince.

Rogers’ immediate impact on offense and defense helped him earn a place on the Mid-Carolina All-Conference team, while Prince became the first men’s basketball player in Crossroads history to be named to the All-State team after averaging 21.6 points, 3.9 rebounds and 1.6 steals per game.

Richardson also praised the contributions of juniors such as Ryan Adcock, John Eason Jr. and Mason Gladieux, the latter of which said competing with a mask mandate and in front of limited fans required significant adjustments from a mental standpoint.

“You had to roll with the punches,” Gladieux said. “You lived day by day because you just didn’t know what was going to happen tomorrow. The game scheduled for tomorrow could have easily been canceled, but that’s something you just ended up getting used to.”

While Richardson had hoped for a better record last year, he said that the determination everyone displayed through the adversity shows the program’s potential. He is confident that Crossroads can build on that momentum with Prince, Rogers, Eason, Adcock and Gladieux all returning this season.

“We were much better than people gave us credit for,” Richardson said. “We’ve now finished in the Elite 8 two of the last three years and we had the second toughest schedule in the state of North Carolina in the NCISAA 1A. We put everything together at the end and finished strong.”

The current roster will be tested at UNC Charlotte and UNC Pembroke this week against opponents like 2021 NCHSAA 4A runner-up Ardrey Kell, and United Faith Christian Academy, who lost to Victory Christian Center in last year’s NCISAA 1A state championship.

Rogers, who will serve as a senior captain for Crossroads this season, anticipates plenty of challenges through the Team Camps, but he is confident he and his teammates will be competitive and win their fair share of games.

“We have to unlock our full potential and play the best that we can,” Rogers said. “No matter who we are playing, we can beat them. I’m really looking forward to seeing how this team is going to look ahead of [the upcoming] season.”

With Crossroads set to play nine games over three days, Richardson said that the Team Camps will give his new and returning players valuable experience on executing his system while also providing them an opportunity to get comfortable with one another.

“We have to mix our new guys into the lineup and see how they do,” Richardson said. “Our veterans didn’t even get to go to Team Camp last summer, so we’re just excited to get back to a little bit of normalcy by travelling,playing basketball and enjoying all of the team bonding.”

The UNC Charlotte Team Camp will run from June 15-16 and consist of three games on each day. Richardson and his players will then make the drive to UNC Pembroke to take part in three more games on June 17.