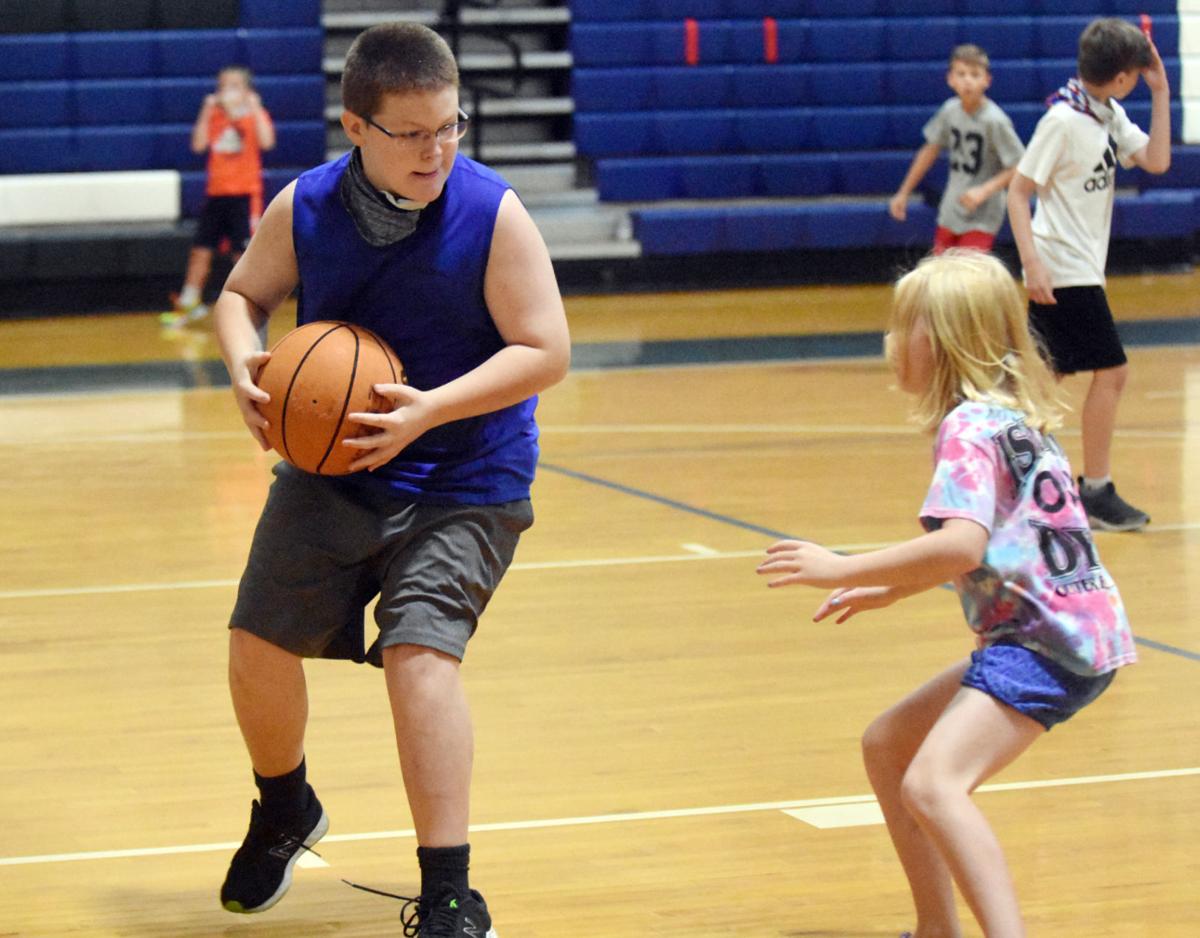 Owen Meeks (center) dribbles the ball past Naomi Satterfield (left) during a game as part of the Colts Kids Camp at Crossroads Christian on Monday morning. 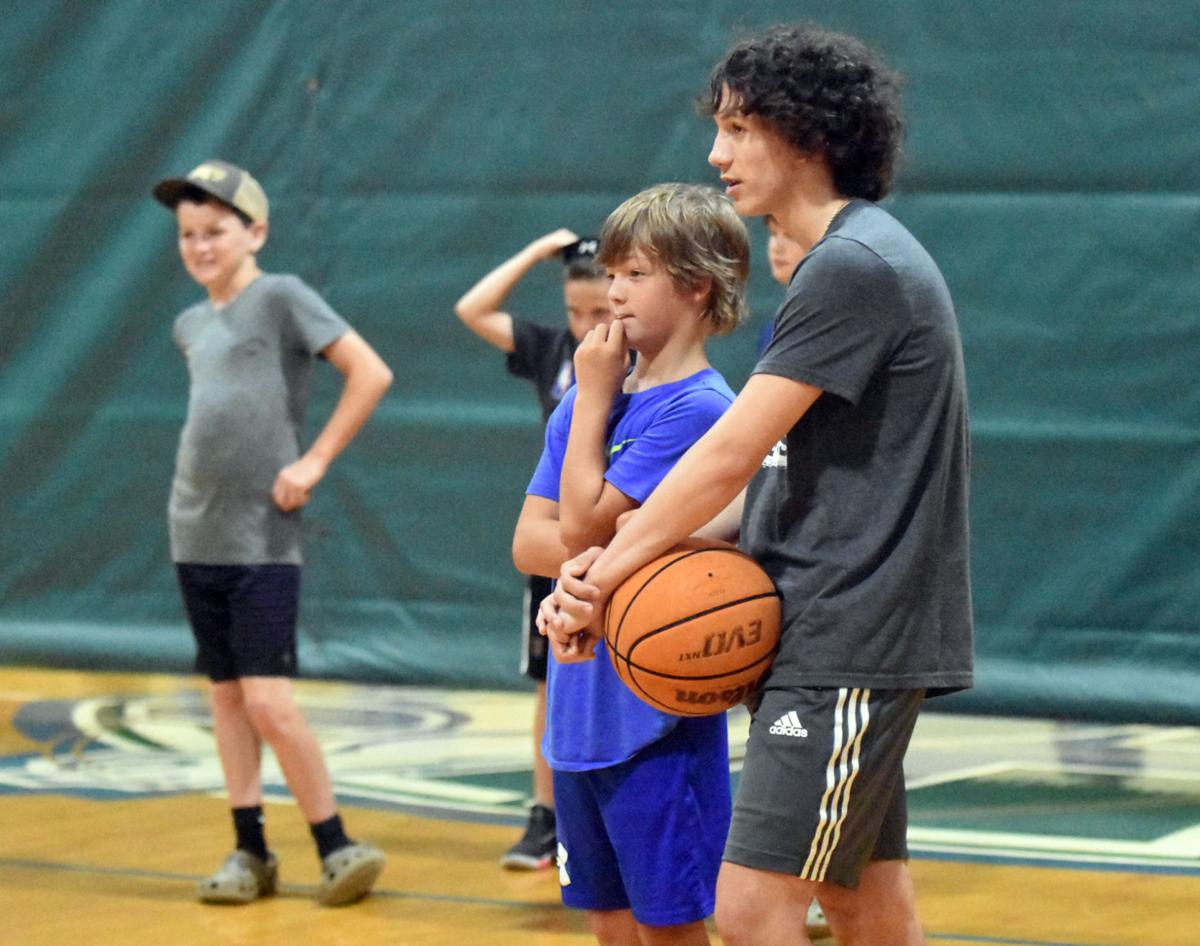 Crossroads Christian basketball player Will Alston (center) talks with Ben Adcock (left) while picking teams during the Colts Kids Camp at the school on Monday morning.

Owen Meeks (center) dribbles the ball past Naomi Satterfield (left) during a game as part of the Colts Kids Camp at Crossroads Christian on Monday morning.

Crossroads Christian basketball player Will Alston (center) talks with Ben Adcock (left) while picking teams during the Colts Kids Camp at the school on Monday morning.

HENDERSON — The gymnasium at Crossroads Christian was much quieter than usual during the summer of 2020 with the COVID-19 pandemic forcing restrictions to limit crowds and emphasize safety.

But with COVID-19 cases now on a downward trend, Crossroads athletic director Scottie Richardson has been eager to see the return of summer activities at the school like the Colts Kids Camp, which is now entering its second week.

“We’ve opened this up to the public so we’ve got a lot of kids,” Richardson said. “Last week we had 34 and we’re now at 47 with some of the public schools finishing up.”

The Colts Kids Camp is available to students ranging from rising kindergarteners to rising sixth graders. It’s designed to teach them the fundamentals of basketball while providing a healthy and fun atmosphere to learn in during the summer.

Students are separated into two groups based on their age.

The younger students from kindergarten through the second grade are placed into the college group, while those heading into third grade and higher make up the advanced NBA group.

Every day at the camp starts with station work in the morning that includes dribbling, ball handling, passing and other drills. Following a brief intermission, camp activities conclude in the late morning with five-on-five basketball games.

Although every student at the Colts Kids Camp gets a general overview on what is expected of them during the week, different goals are set between the younger students that are still developing and the older ones who are learning beyond the basic fundamentals.

“K-2 is all about dribbling because we have so many kids that want to pick the ball up and run with it for about 15 yards,” Richardson said. “Our goal with the younger kids is to get them to dribble the ball while helping the kids at the [next] level understand how to share the ball on offense and use teamwork on defense.”

One of Richardson’s favorite aspects of the Colts Kids Camp is that many of his own players work on the staff, which he said gives them good experience on what it is like to be a coach and lead a group of people.

Among the players working at the Colts Kids Camp this year are outgoing senior Noah Brantley, who registered 4.1 points and 3.5 rebounds per game during his final year at Crossroads, along with rising senior Ryan Adcock and rising sophomore Will Alston.

Another positive for Richardson is that he gets to see students who have grown and developed through the Colts Kids Camp end up becoming counselors themselves like middle schoolers Wesley and Jackson Anderson, who was a standout on the Crossroads baseball team this year.

Richardson hopes to see more students like Wesley and Jackson become counselors at the Colts Kids Camp over time and is confident that the strong turnout for this year is a sign that the camp will remain a strong tradition at both Crossroads and in Vance County.

“This is a large gym with six baskets, but we’re about maxed here,” Richardson said. “When I came here my first year, we had 48 students and we’re at 47 now. The kids want to be here and they want to continue growing, so we want to see more of them go all the way through starting at kindergarten.”

The Colts Kids Camp is set to run for eight weeks in total and will conclude at the end of July.