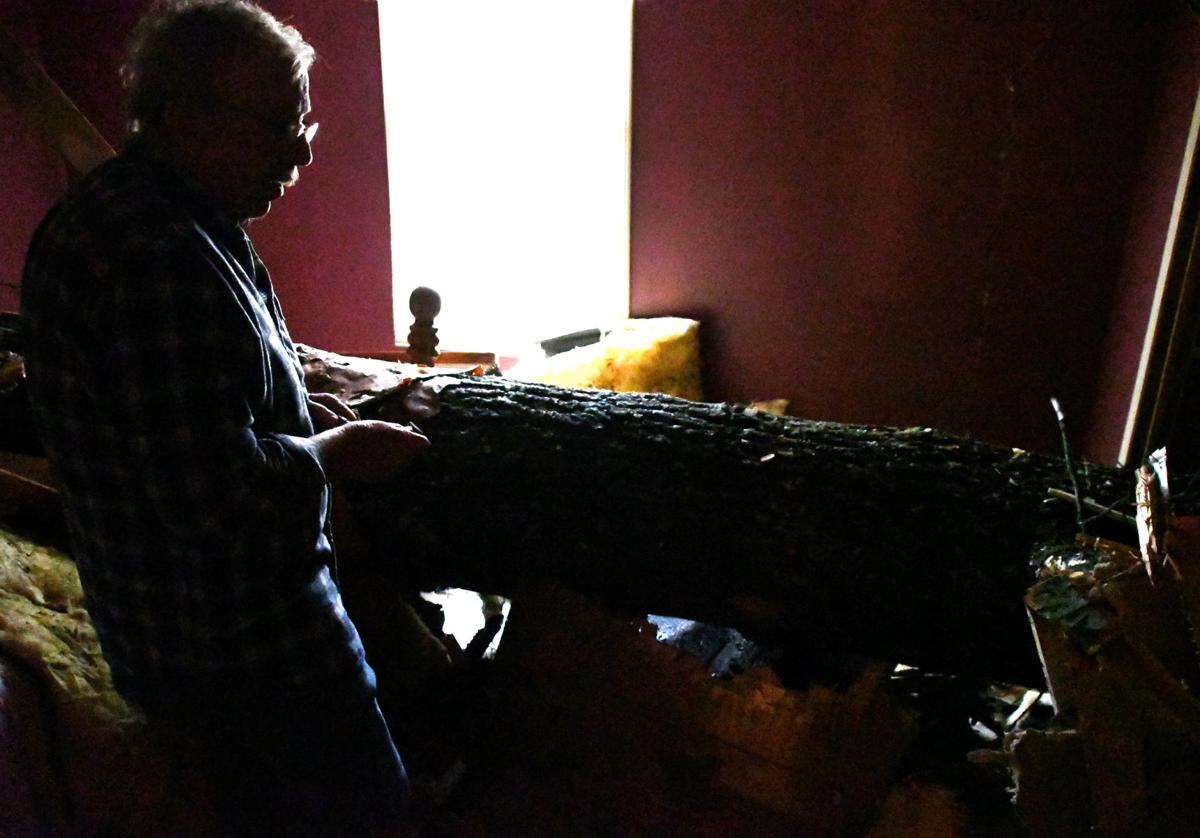 Tom Smith inspects a tree that crashed into his Gun Club Road home Monday morning. It fell across the length of one side of the house and into a bedroom. 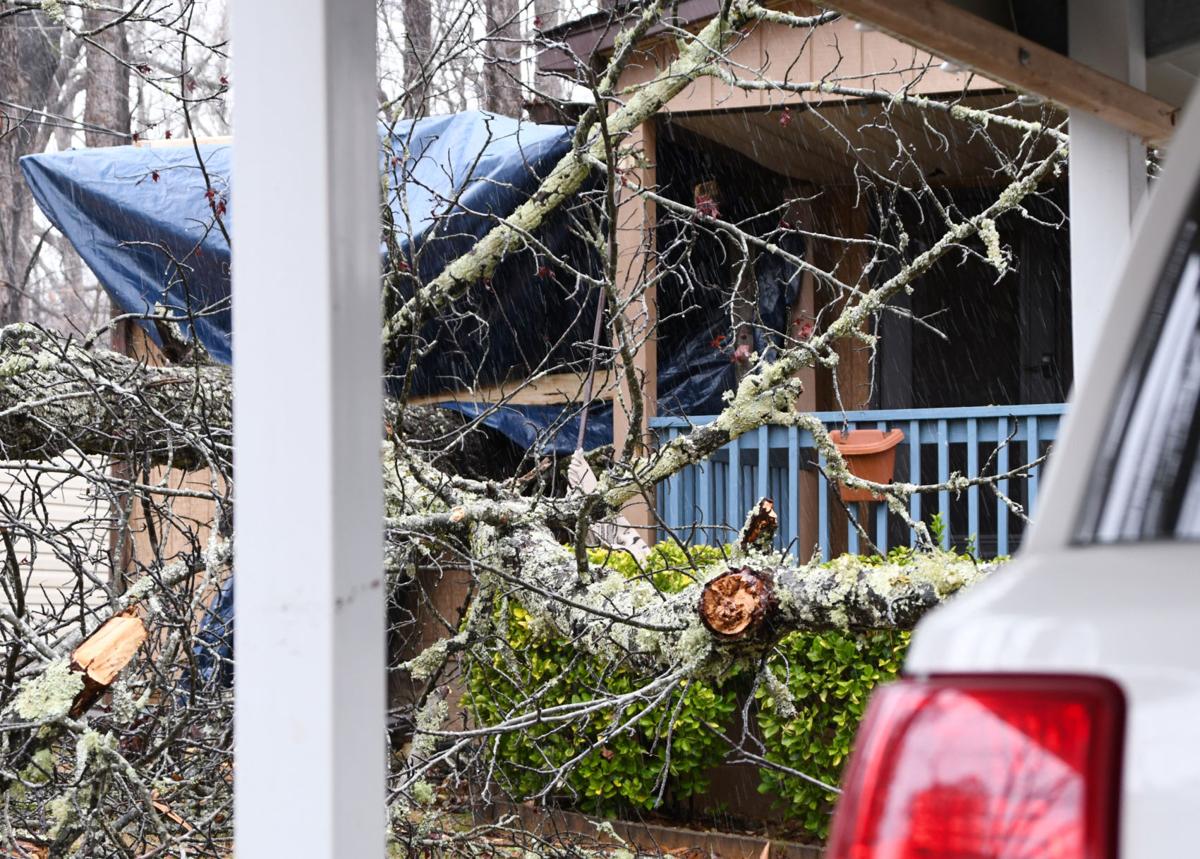 By mid-morning Monday, damage to the Smiths’ Dabney home caused by a downed tree had been covered with a tarp. 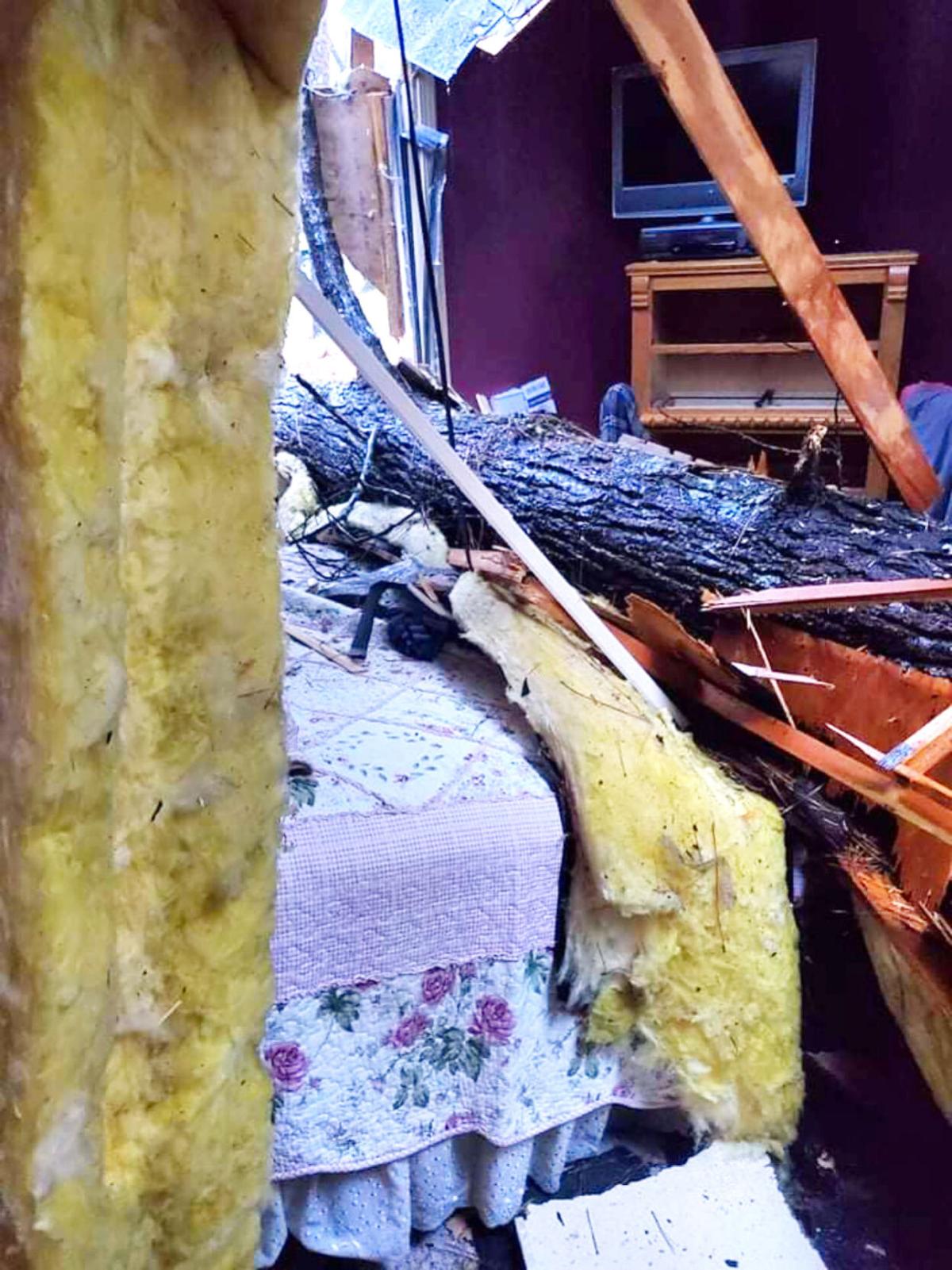 The tree crashed into one of the Smiths’ bedrooms, leaving a trail of damage.

Tom Smith inspects a tree that crashed into his Gun Club Road home Monday morning. It fell across the length of one side of the house and into a bedroom.

By mid-morning Monday, damage to the Smiths’ Dabney home caused by a downed tree had been covered with a tarp.

The tree crashed into one of the Smiths’ bedrooms, leaving a trail of damage.

DABNEY — Teresa and Tom Smith feel fortunate to be alive after a tree tore apart their Gun Club Road home early Monday morning, part of a winter storm that brought snow and heavy wind gusts to the Tri-County area.

The tall poplar tree was uprooted and crashed atop the one-story home in the Dabney community north of U.S. 158 Bypass around 7:30 a.m., through the roof and onto the foot of an unoccupied bed. Teresa, having just washed her face in the adjacent bathroom, narrowly avoided the path of destruction.

“I heard the wind blowing really fierce,” Teresa said. “And so I started to walk out of the bedroom and I just felt something from the backside. I came out and then I looked and I knew something [was wrong] and I looked behind me and there was the tree.”

The fallen tree spanned the entire length of the bedroom and the left (if facing the front of the house) side of the home, damaging the bedroom floor and disrupting the structural soundness of the remainder of the dwelling that still had power late Monday morning before rain turned to snow outside.

Teresa had anticipated making a shopping trip to Smithfield on Monday, and was caught off guard when she awakened to the sound of heavy wind.

Unbeknownst to the Smiths, the National Weather Service would later that morning issue a wind advisory for central North Carolina, warning of “northerly winds 15 to 25 mph, with gusts up to 45 mph.” The advisory also detailed that “significant rainfall last night, combined with these strong winds, may cause some trees to uproot.”

The Smiths’ electricity flickered Monday morning before the crash, prompting Teresa into the bathroom to wash her face and brush her teeth, and Tom to put some water in the bathtub in case power was lost.

Then, with the house still dark not long after dawn, came what amounted to an explosion for the Smiths.

“The world had come to an end,” Teresa said of the noise of the crash.

HONEYWELL APPOINTS ROSE LEE TO BOARD OF DIRECTORS

Which Kids Are Most Vulnerable to Severe COVID-19?

Do You Feel Old? It Could Be Aging You

“It was like a bomb went off, if you can visualize that,” Tom added. “Because everything was coming down off the walls.”

Daughter and neighbor Leslie Walthall was the first to arrive. Other community members quickly came to the Smiths’ aid, including the Watkins Volunteer Fire Department and Poplar Creek Baptist Church Pastor Tony Evans and wife Paula.

Walthall’s co-workers at H.G. Reynolds Co., a local general contracting and construction management firm, covered the gaping hole in the roof with a tarp, but on Monday morning, the Smiths expected to be looking for a hotel, not wishing to impede on their daughter’s already full house.

The Smiths, who met and married in Richmond, Virginia, have been on Gun Club Road for around 40 years.

Leslie grew up in the house.

“Yes, it is a material thing,” Walthall said. “But this is a home that they have built for the last 30-some years. So — it’s emotional.”

Standing in the living room, turning back towards the damage, Walthall added, “That tree is right there. Her bed is in half.”

Amid the chaos of the morning and having to repeatedly recount the story, one memory especially stood out to Teresa: the angel atop their living room Christmas tree remaining lit in the moments after the tree crash. She looked at the angel and thought, “To God be the Glory” and thanked God for saving her life.

“Because he saved my life this morning,” Teresa said, “and it’s only through the power of God that I’m alive.”