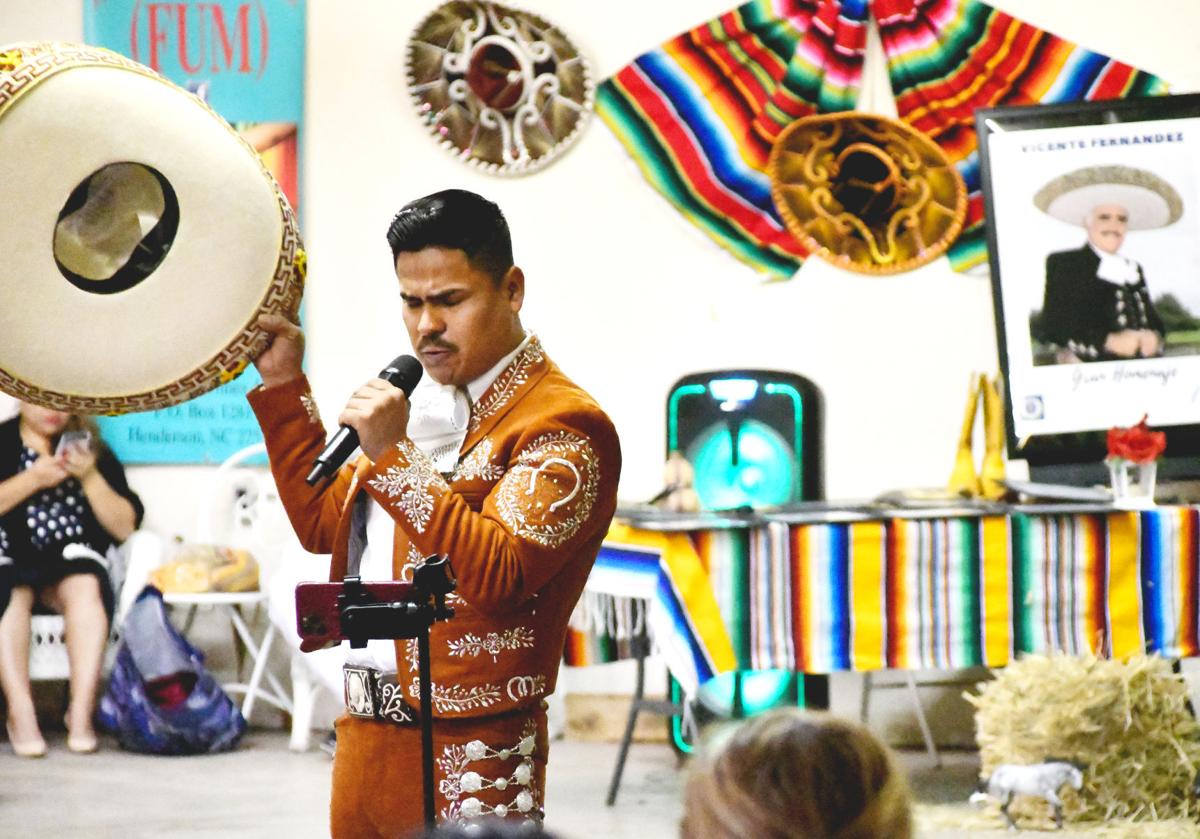 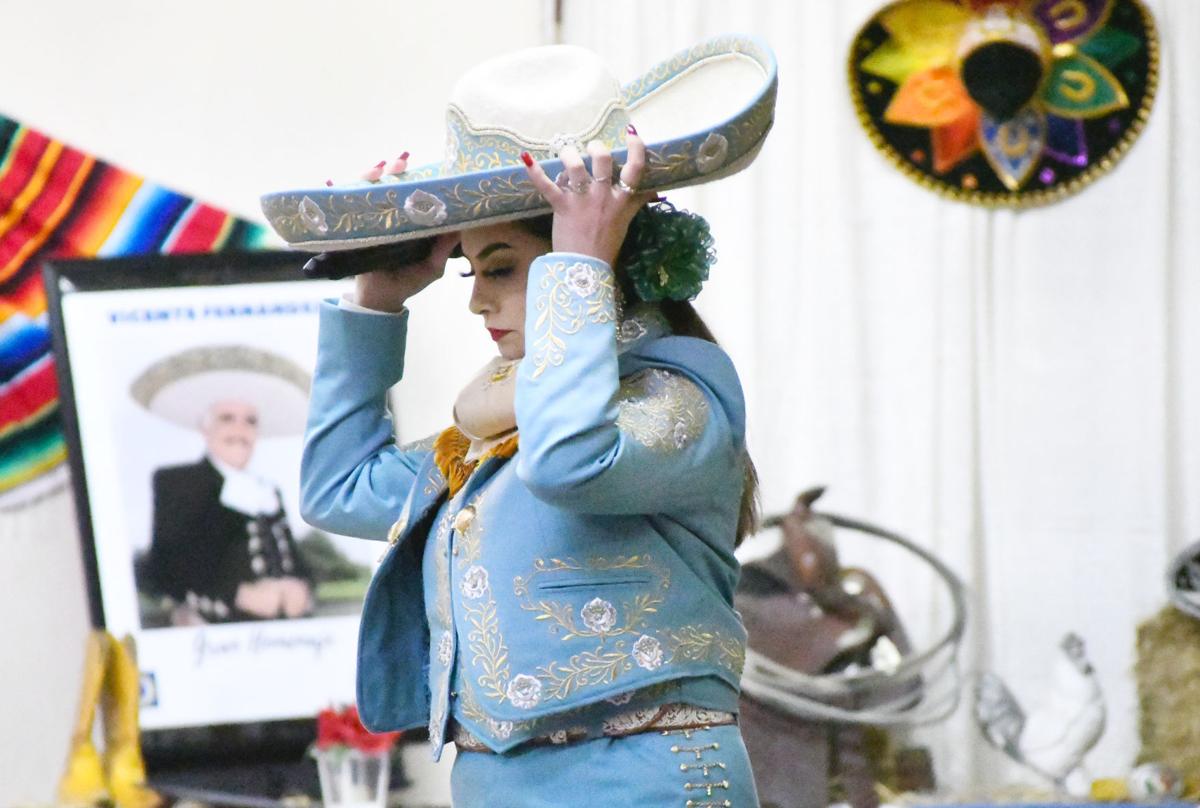 Ingri La Calandrita places a traditional Mexican hat on before singing one of Vicente Fernández’s songs Dec. 30 at a Henderson celebration for the Mexican singer’s life. 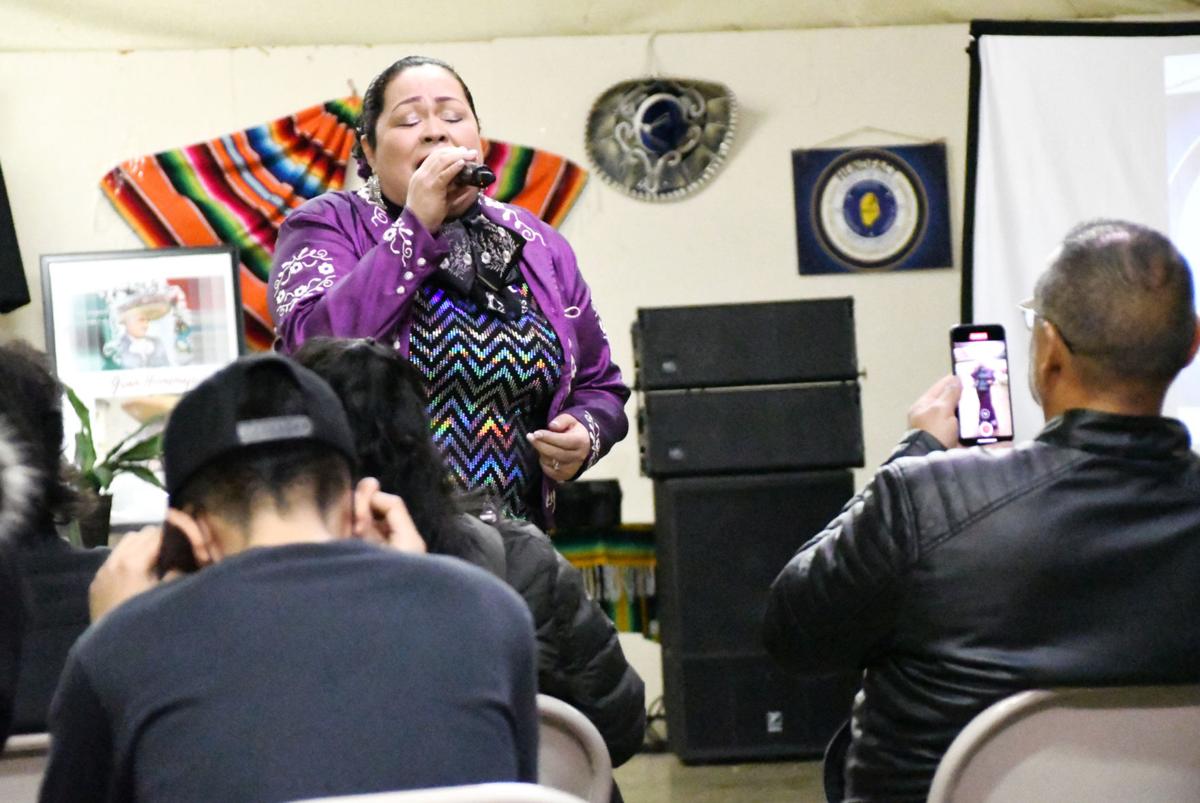 Henderson’s Ángeles Días La voz del Centimiento was one of the featured singers for the event to honor the life of Mexican singer Vicente Fernández.

Ingri La Calandrita places a traditional Mexican hat on before singing one of Vicente Fernández’s songs Dec. 30 at a Henderson celebration for the Mexican singer’s life.

Henderson’s Ángeles Días La voz del Centimiento was one of the featured singers for the event to honor the life of Mexican singer Vicente Fernández.

HENDERSON — Outside the walls of a converted warehouse behind El Pancito Bakery, rain drizzled on an unseasonably warm December evening, the Thursday before New Year’s Eve.

Sparse Raleigh Road traffic signaled an otherwise normal and quiet night as most residents awaited a day off from work. Passersby wouldn’t have known that on the inside, a spirited memorial to legendary Mexican singer Vicente Fernández transformed a small piece of South Henderson into Guadalajara, at least for a few hours.

Hendfact, or Henderson Fuerza Activa, organized the celebration of the life of Fernández, who recorded 50 albums, appeared in dozens of films and won three Grammys and eight Latin Grammys. Known as the King of ranchera music, he died at 81 on Dec. 12.

Hendfact’s Antelmo Salazar, who was born in Mexico but has spent the last three decades in Henderson, said Fernández was an important figure for many Latinos, regardless of their country of origin.

Community events like these for local Latinos have become more common since Hendfact was founded in 2009 to serve and represent Tri-County Latinos as well as advocate for the rights of all races or ethnic groups. Before then, most significant Hispanic gatherings were church-related, Salazar said.

North Carolina’s Latino population now exceeds 1 million, having increased by 28.3% between 2010 and 2019, according to U.S. Census Bureau data.

Salazar and his translator Ericka Romero are surprised by the recorded number of Latinos in North Carolina, which was only 75,000 in 1990. They wondered, if so many are here, “where are they?”

Absences in some places might be noticeable because, per UNC Chapel Hill’s Carolina Demography, one in four North Carolina Hispanic residents reside in either Mecklenburg or Wake counties. A total of 22 counties, including Warren County, had fewer than a thousand Hispanic residents in 2019.

'I think it is a retaliation': Why Iranian-backed group may attack the UAE

Latino numbers in the Tri-County might also seem small to Salazar since he knows, well, practically everyone.

“He knows everybody,” Romero said. “Anything — they will come to him.”

Salazar said the area’s Latino community has always been there for him, so he intends to return the favor.

“When they knock on the door,” Salazar said, “I’ll open it.”

Hendfact works regularly with local law enforcement, government and judicial officials, and other organizations as an advocate for Latinos, particularly people who don’t speak English.

Salazar’s outfit also works with youth to keep them out of trouble, involved in volunteering, and in Antelmo’s traveling dance troupe.

“This is a community thing,” Ericka sad. “Getting to know more people, what they do, gets you to the people that might [be able to] help their needs.”

Last fall, Hendfact facilitated the visit of North Carolina’s consul general of Mexico, drawing more than 300 people eager to renew legal identification documents like passports. Through the power of social media, some came from as far as Charlotte and the Triad.