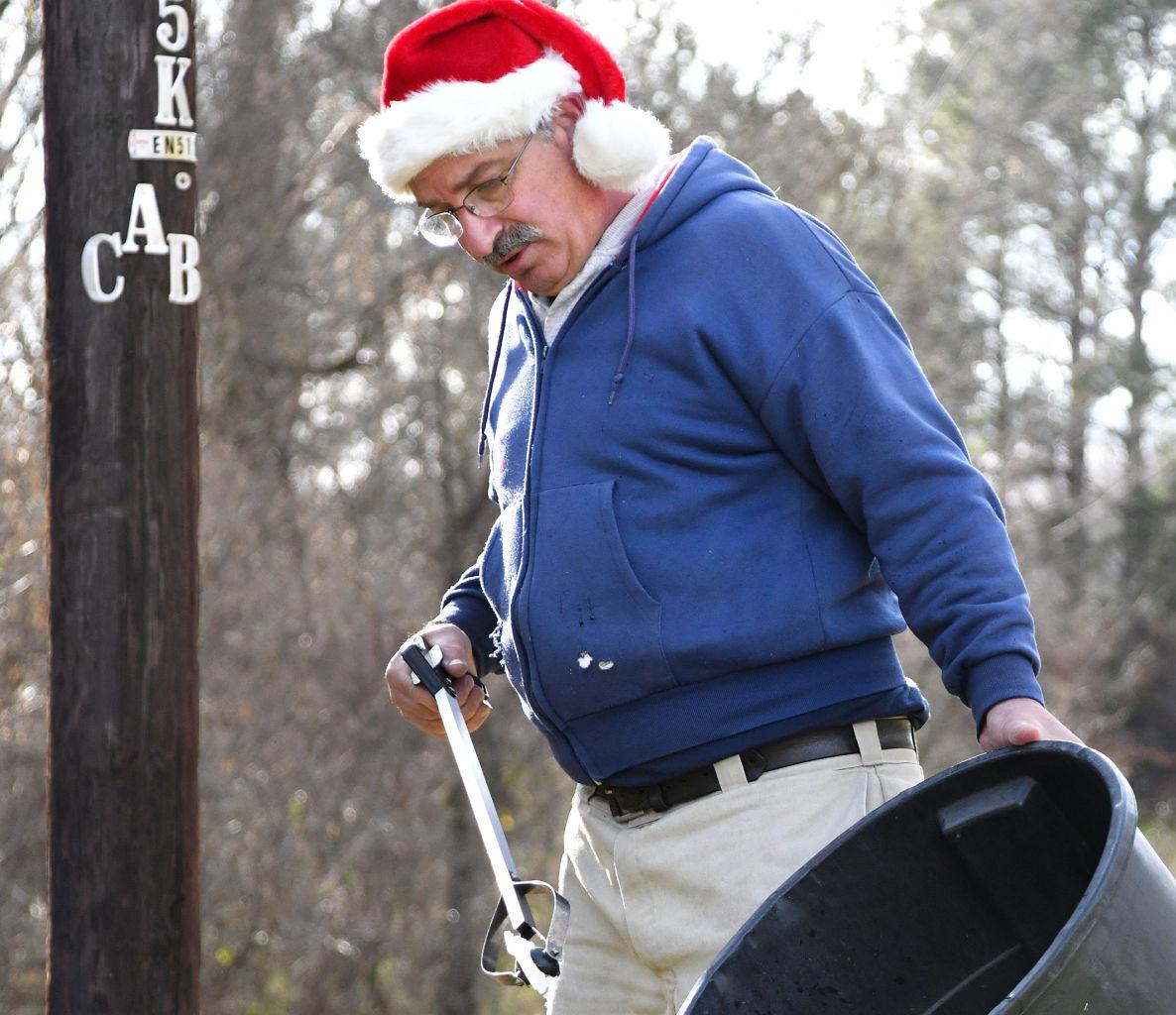 Al Simeone, a Henderson resident by way of Connecticut, collects trash alongside Oxford Road Monday afternoon near Vance Academy Road. He picks up litter at least twice a week in that immediate area and beyond. 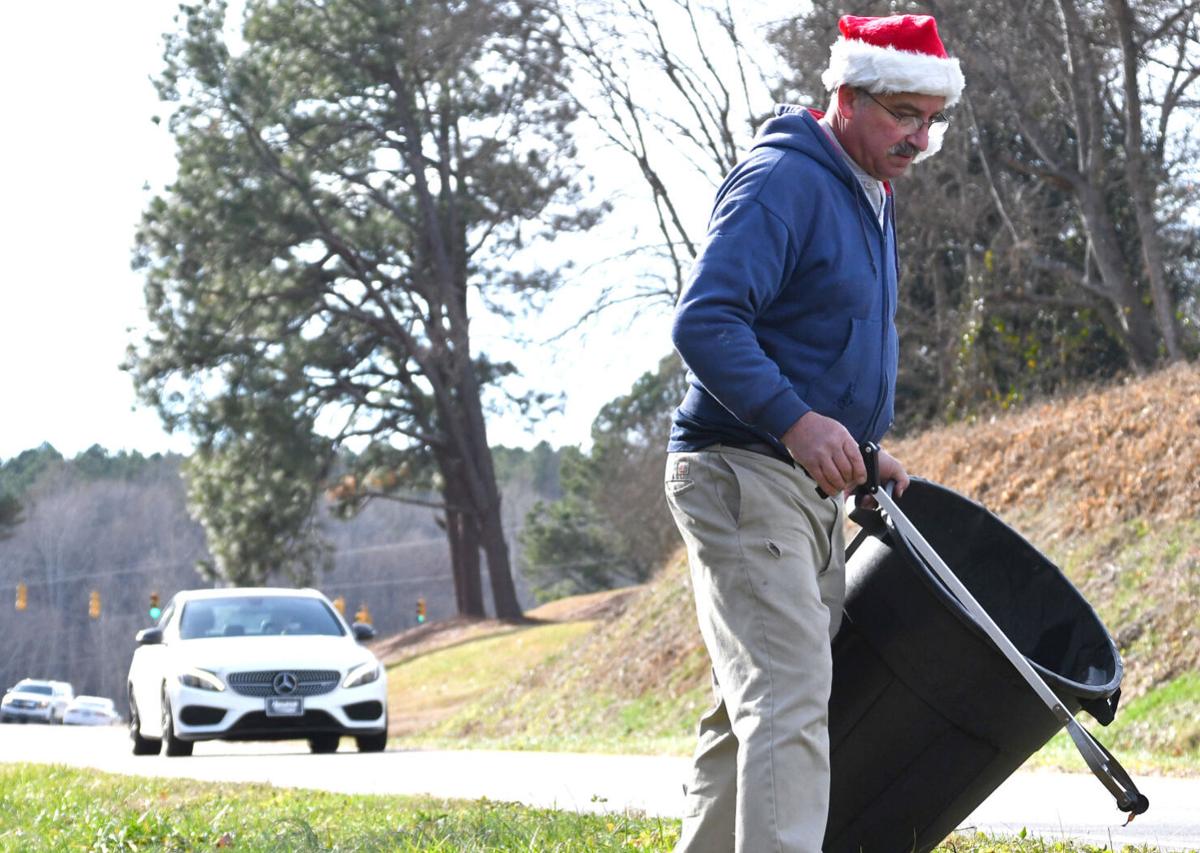 Al Simeone says the traffic along Oxford Road is nothing compared to what he was used to back home. He’s taken it upon himself to clean up parts of Vance County.

Al Simeone, a Henderson resident by way of Connecticut, collects trash alongside Oxford Road Monday afternoon near Vance Academy Road. He picks up litter at least twice a week in that immediate area and beyond.

Al Simeone says the traffic along Oxford Road is nothing compared to what he was used to back home. He’s taken it upon himself to clean up parts of Vance County.

HENDERSON — Al Simeone could use some Ho-Ho-Help.

Simeone, a Connecticut transplant who has lived in Henderson’s Carolina Pines neighborhood the last 4 1/2 years, donned a red Santa hat Monday afternoon as he plucked the trash away from Oxford Road with a grabber. He’s 63, retired and the four 30-gallon trash bins he fills up at least twice a week are placed in the back of his Dodge pickup purely on a volunteer basis.

“What I find very funny is I’ve been doing this four and a half years,” Simeone said. “People wave to me. They’re very friendly. Not once has anyone stopped to say, ‘Hey do you need a hand?’ I mean I go for miles here. I’m 63 years old.”

For some added context, Simeone made that statement cheerfully, as one might expect from someone wearing a festive cap. He wasn’t complaining, just stating a fact, and noted other individuals and groups around town that are equally environmentally conscious. But he would like to enlist some more help.

There’s no shortage of work, especially since the pandemic cut into the DOT’s regular cleanup efforts.

Bottles. Beer cans. Needles. Plastic bags. Paper. Cardboard. Simeone sees all of that, and more. On Monday, he collected a pair of calculators and a transistor radio. Go figure.

“I’ve always been struck by how much I see on the sides of the roads,” Simeone said, pointing out it got much worse with the onset of COVID-19. “It’s just unbelievable. So I always come out here every chance I get to try and make a difference in the community.”

Simeone said a Connecticut law makes for cleaner roads in his home state, where he served as an arborist before retiring to be closer to his son and daughter-in-law, who are doctors in Raleigh.

Connecticut is one of 11 states in the U.S. that are “bottle bill” states, according to Connecticut’s state website. Bottle bills, also known as container redemption programs, may have slightly different provisions in each state but work by charging a small deposit on a container at the time of purchase, which is then returned to the consumer when the empty bottle is returned.

Here's How to Get Your Free Home COVID Test Kits

'I am going to die': Hear what the suspect said on livestream

Henderson’s City Council addressed trash pickup in each of its two last monthly meetings and praised volunteers for their efforts within the city’s jurisdiction.

The DOT also has methods for turning in litterbugs at keepncbeautiful.org — if you can catch them in the act.

Simeone says any enforcements don’t seem to be working around his neighborhood. The trash is back almost as soon as he can pick it up.

He’s mindful of the traffic, saying years of living in Stamford, Conn., about 45 miles from New York City, prepared him.

Simeone would like to see more people get involved with cleaning up, particularly younger generations.

“I coached for 25 years in baseball, so I know kids love to do this stuff,” he said. “I don’t know anybody down here. That’s the problem. When I was in Stamford, I knew everybody. Had a business for 40 years.”

Not that what Simeone is doing has gone unnoticed or unappreciated, especially when he’s wearing the Santa hat.

“I get a lot of response from people,” Simeone said. “They’ll see me picking up trash. I’ll always get a wave or a beep. A couple of people got to know me and they always wave to me. They say, ‘Al that’s a great thing you do.’ ”