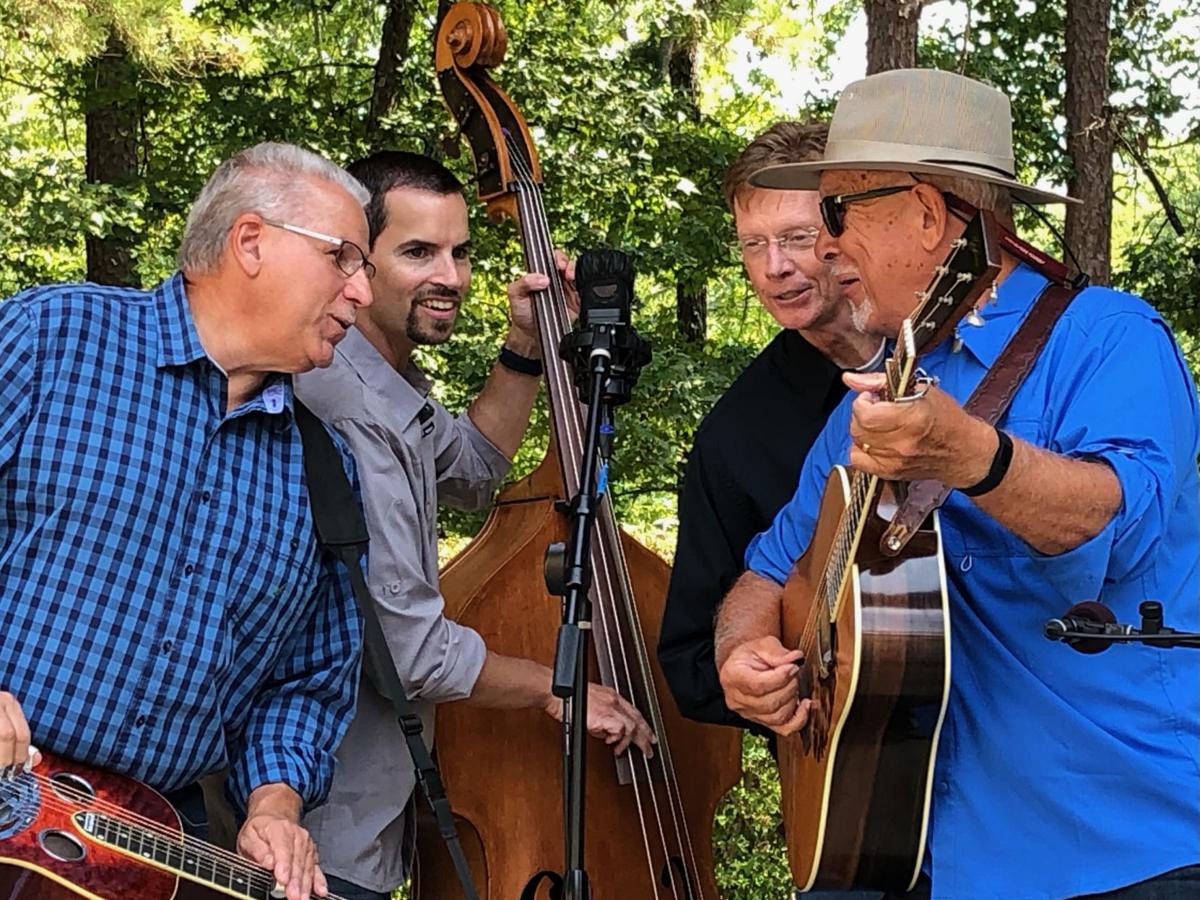 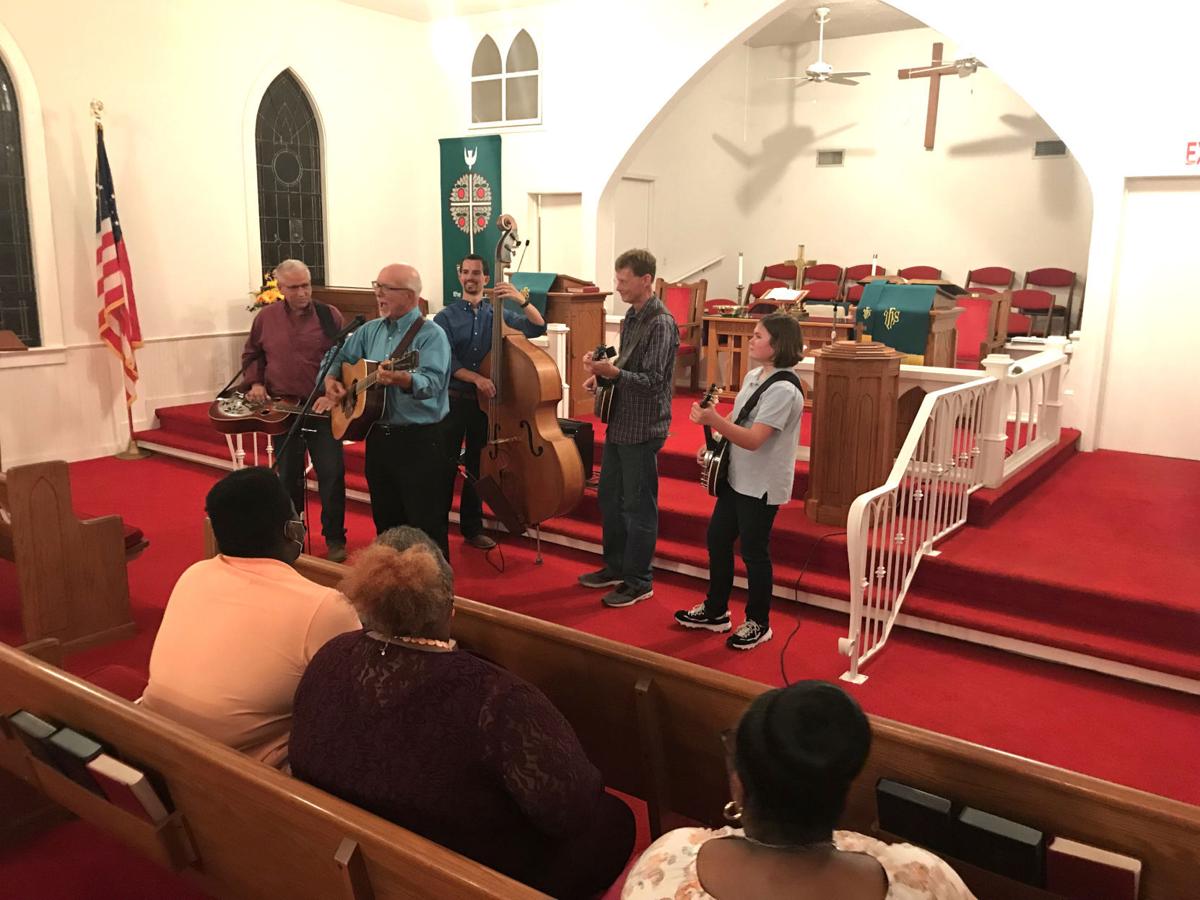 GrassStreet was joined Sunday night for their performance in Roxboro at Grace/Ca-Vel United Methodist Church by Alanabeth Duncan, far right.

GrassStreet was joined Sunday night for their performance in Roxboro at Grace/Ca-Vel United Methodist Church by Alanabeth Duncan, far right.

ROXBORO — On Sunday evening at the Grace/Ca-Vel United Methodist Church, Wayne Kinton surveys the audience. How many folks in the little church near downtown Roxboro have seen his bluegrass quartet play?

A number of hands go up in the crowd of about 40 that half fills the wooden pews of the red-carpeted nave, not long after their church’s hot-dog supper has concluded and a Gospel group serving as the opening act has set the stage for 68-year-old Kinton and his crew.

“It looks like a lot of ya’ll have seen us before and ya’ll came anyway,” he says in the band’s introduction, drawing a round of laughs and setting the tone for what’s always more than a jam fest when he, his son David Kinton, Ricky Hargis, and Tab Kearns get together to play. “If you don’t know who we are, we’re GrassStreet.”

GrassStreet, formed in 2003 by Wayne and David of Henderson has rebounded from the hit COVID-19 dealt to live entertainment, and is booked with shows through the end of next year that include a Wednesday, Oct. 20, day-long gig at the N.C. State Fair. People are aching to see and hear live music again and GrassStreet is ready to oblige, whether they’re playing a family reunion, Raleigh’s Lincoln Theatre or the streets of downtown Nashville.

This iteration of GrassStreet, with an album due out next year, has been together since 2007. There are no grand visions of hitting it big and reaching global fame. Wayne, David, Ricky, and Tab just like to play music.

“We have fun wherever we go,” David said.

When Wayne was a youngster, his mother Barbara sat him on the piano bench and made him take lessons. After Wayne figured out he could play by ear, tutorials didn’t last terribly long before he traded the piano in for a guitar, which suited his father Bob.

Wayne had a great grandfather that played the banjo, but his dad’s idea for guitar instruction relied on help from another source.

“Sit in front of the TV,” his dad told him, “and you put your fingers where they put their fingers.”

The tip must have paid off.

Wayne still uses that method to gain insight from his bandmates. And they learn from him, too. David, a 2000 Northern Vance High School graduate, plays an upright bass and mandolin, Ricky the banjo and Tab the dobro — an acoustic guitar with a metal resonator built into its body.

Off stage, the group revels in self-deprecating humor and never misses a moment to rag on Ricky, who willingly accepts his role as the “comedic relief.” When the lights go up, the group’s temperament and chemistry doesn’t skip a beat.

Wayne, Ricky says, knows how to read a room.

“Wayne is a good entertainer,” said Ricky. “He can keep a show going.”

There was no better time to put the spotlight on the lanky banjo picker than Sunday in his hometown of Roxboro. The band’s favorite bit involving Ricky, for their “Heavenly Mansion” tune, was a must for the Gospel-centric show that featured a cameo from Roxboro’s Alanabeth Duncan, who is learning from Ricky, and others, how to play the banjo.

Wayne told the audience this would be Ricky’s big moment, a chance for him to showcase his vocals. He then asked Ricky if he had his words ready for the song and the 62-year-old obliged, taking a peek behind his banjo to make sure he had them memorized.

Wayne, David and Tab gathered around the lone mic, belting out the song before reaching the chorus line, “Just to walk through this heavenly mansion...”

The singers stepped back, allowing Ricky to slide to the center and gently speak into the microphone.

“Will be,” Ricky crooned, before the others jumped back in to finish the line, “good enough for me.” Those two words were Ricky’s only vocals on the song and for most of the night.

The crowd loved it. They always do.

“You can look at us and tell we’re like family,” Wayne said. “We have a lot of fun with what we do and we enjoy each other.”

Wayne said GrassStreet enjoys playing churches because of the message they can send with their Gospel music.

And “the people are quiet,” Wayne said.

Church halls do make for a more intimate environment, and unlike a festival or party, all eyes are looking forward and focused on the music.

On Sunday at the Methodist church, the set list that started with “Old Time Religion” was geared towards Gospel, which happens to be the theme for GrassStreet’s upcoming seventh album.

But GrassStreet is versatile, capable of adapting to their audiences as they see fit. Ricky and Tab enjoyed rock and roll in their younger days — Lynyrd Skynyrd, Ted Nugent, Badfinger, and Led Zeppelin. David didn’t develop a taste for bluegrass until college, and he and Wayne have played swing, sock hop and more together for many years.

They can play a full set of traditional bluegrass or mix in the likes of Bob Dylan, Bob Seger or classic country.

“I like their originals a lot,” David’s wife Steffi said. “I see a lot of their shows so when they come up with new jokes or twists or arrangements on the songs, I really enjoy that. Even though I’ve seen it a lot, one show is never a repeat of another.”

“It’s very hard to categorize what our music is,” Wayne said. “Ours is bluegrass because we have bluegrass instrumentation, but we cover a lot of different types of genres of music with this configuration.”

Tab emphasized that seeing and hearing them play in person is key to truly grasping GrassStreet’s essence.

It’s not easy to make bluegrass music sound good, said Wayne, who lives at Kerr Lake. GrassStreet has that down. The band’s combination of talent, camaraderie, cooperation, and commitment just isn’t all that common for this section of the Piedmont.

“We don’t have ideas of being a touring band with a bus and all that stuff,” Wayne said. “We gave up on that a long time ago. What we do is enough work as it is. But for what we do, it’s pretty special.”