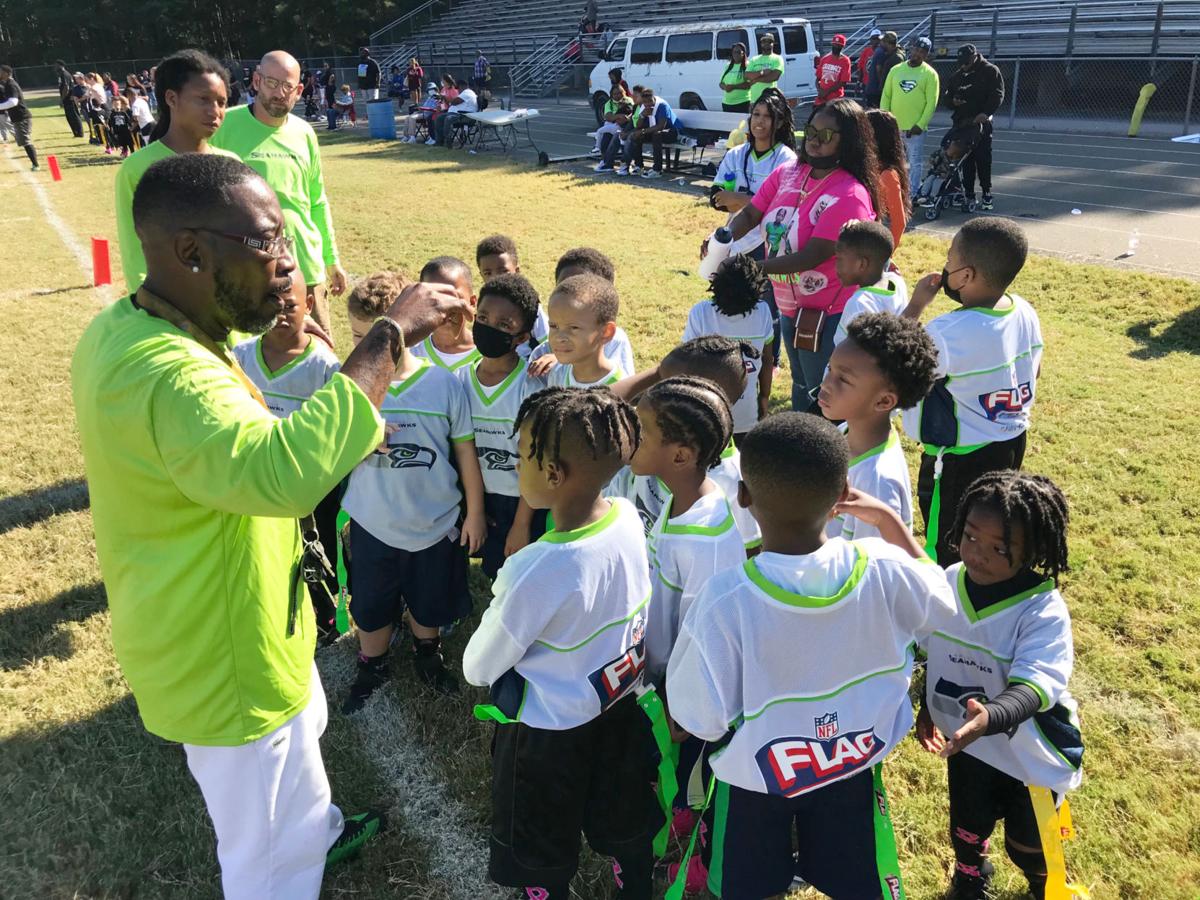 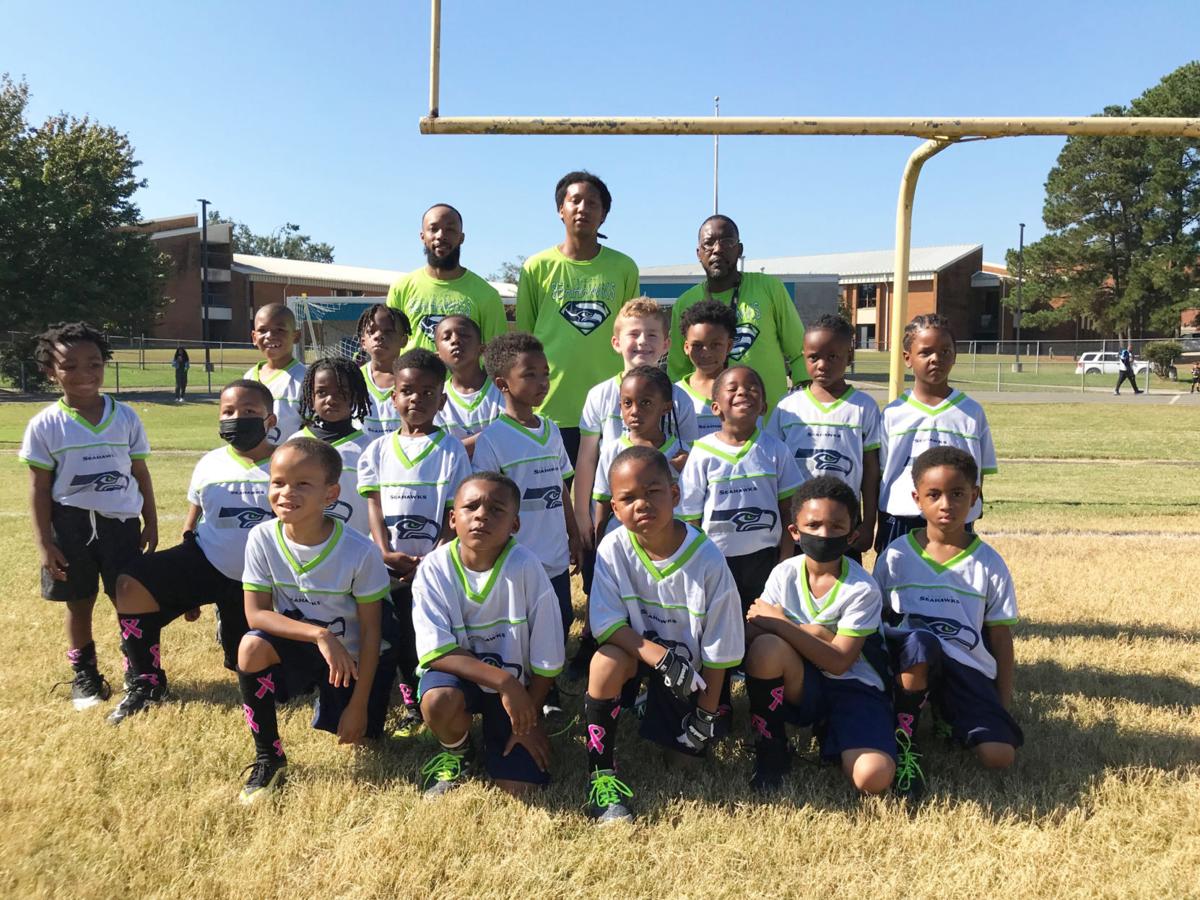 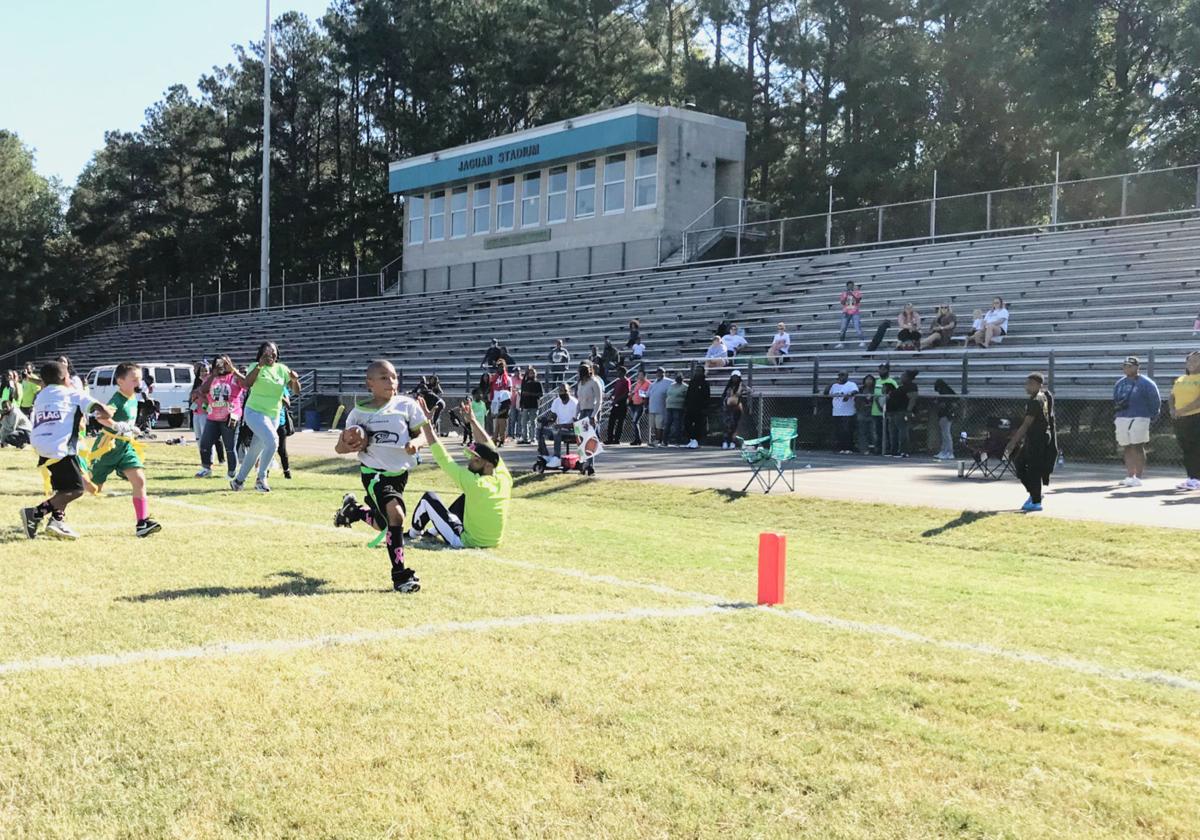 Ahmad Jeffers takes it to the house for a touchdown as time expires Saturday in the Tri-City Seahawks’ win over Bunn. 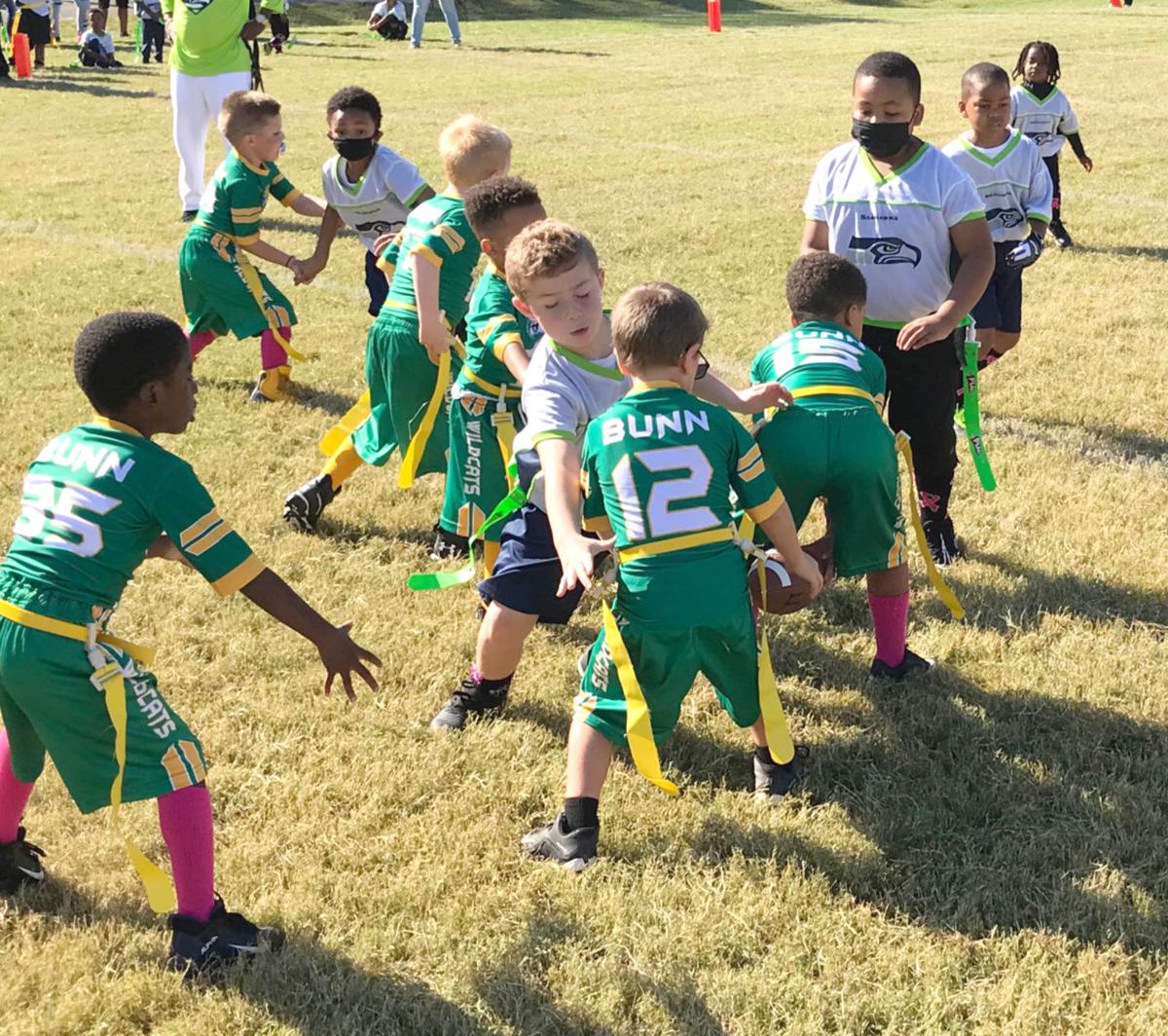 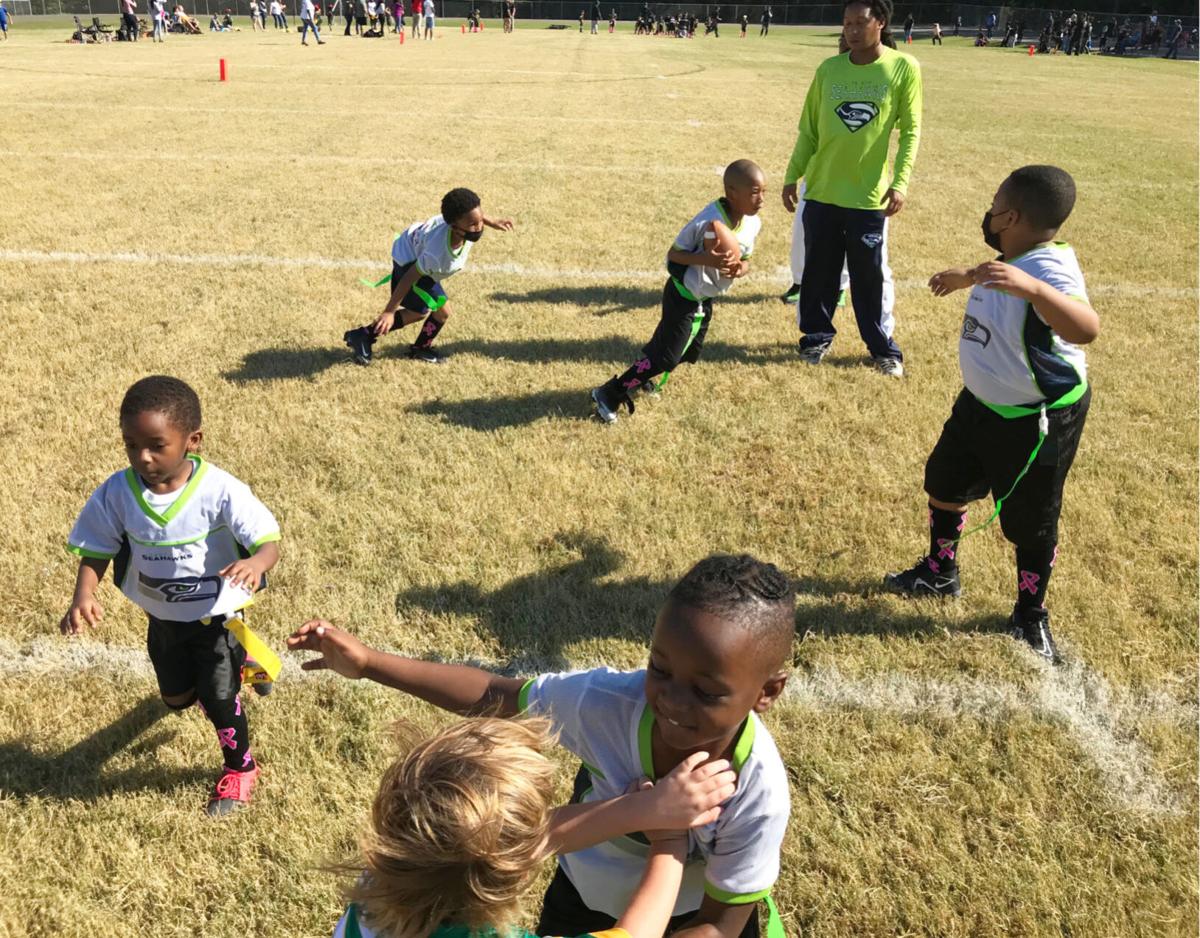 Chase Harris throws a block up front for the Tri-City Seahawks Saturday against Bunn as Ahmad Jeffers takes the handoff in the backfield for a run.

Ahmad Jeffers takes it to the house for a touchdown as time expires Saturday in the Tri-City Seahawks’ win over Bunn.

Chase Harris throws a block up front for the Tri-City Seahawks Saturday against Bunn as Ahmad Jeffers takes the handoff in the backfield for a run.

The ground level for competitive football, most of the Tri-City players range in age from 4 to 6, but many of the elements one expects from the gridiron can be found when the Seahawks take the Vance County Middle School field for game days: reverse-run play calls, defensive swim moves, collisions and touchdown dances.

The unbeaten Seahawks pour blood, sweat and tears into this. The substantial volume of tears that mounted late Saturday morning as the midday sun loomed over Jaguar Stadium offers a reminder that the miniature athletes are more delicate than they seem while the action is proceeding.

Some of the players found their moms on the sideline for comfort, and one of the opposing players from Bunn left 10 young men on the field for an emergency bathroom break.

They are kids, after all.

Winning might not be everything, but it does make the experience more fun. And these Seahawks, one of Henderson-Vance Recreation and Parks’ four youth football teams, have been having a lot of that this season with six wins, no losses and one tie.

Tri-City — intended to encompass Henderson, Oxford and Warrenton — scored on offense Saturday for Homecoming against Bunn nearly every time it touched the ball. Quarterback Jordan Harrington tossed genuine forward passes and defensive lineman Gavin Weiner tore through Bunn’s offensive trenches with ease, once ripping the opposing QB’s yellow flag from his waist before he could even secure the snap.

Dressed in Seahawks neon, Obery watched attentively from the sideline Saturday, regularly shouting words of encouragement to the team and congratulating them on big plays.

Dominique’s son Ahmad Jeffers, 6, was one of the more physically imposing kids on the field Saturday and scored a long rushing touchdown against Bunn on the final play as time expired.

In addition to Bunn, Tri-City also welcomed teams from Knightdale and Chatham County on Saturday for round-robin action.

On his way to the exit, a Chatham parent told McKnight he appreciated the way the Seahawks ran “their organization.”

“To me, this is one of the best programs,” Marc Weiner said. “We looked around and visited some programs. We came out here and I want my son to play with the best, and I feel like that’s what this team is.”

McKnight is joined on the coaching staff by Shantel Harrington and Shawn Carroll Sr.

McKnight, a 48-year-old Henderson native, doesn’t have any children of his own on the team, and his motivation for being a coach has little to do with football.

“The kids,” McKnight said. “To keep them out of trouble. Try to instill positivity into them. See, I used to work at the federal prison. And I don’t want them to go that way. So we start them young, and I hope it has some kind of effect on them.”

McKnight keeps it structured. At one point Saturday, he had the team complete a disciplinary run in between quarters when the Seahawks players weren’t able to demonstrate how the coaches had previously taught them to properly line up on defense.

Listening? Yeah, that’s one of the toughest parts, McKnight said, but he knows he’s getting through to the Seahawks in other ways, and that’ll pay off in the long run.

“It’s fun,” McKnight said. “The kids are our future, so if you take time out with kids right now, later on, they’ll remember it.”

Take me out to the Seahawks game

Those of us that occasionally take sports too seriously ought to be required to experience, or revisit, athletic events like the Tri-City Seah…