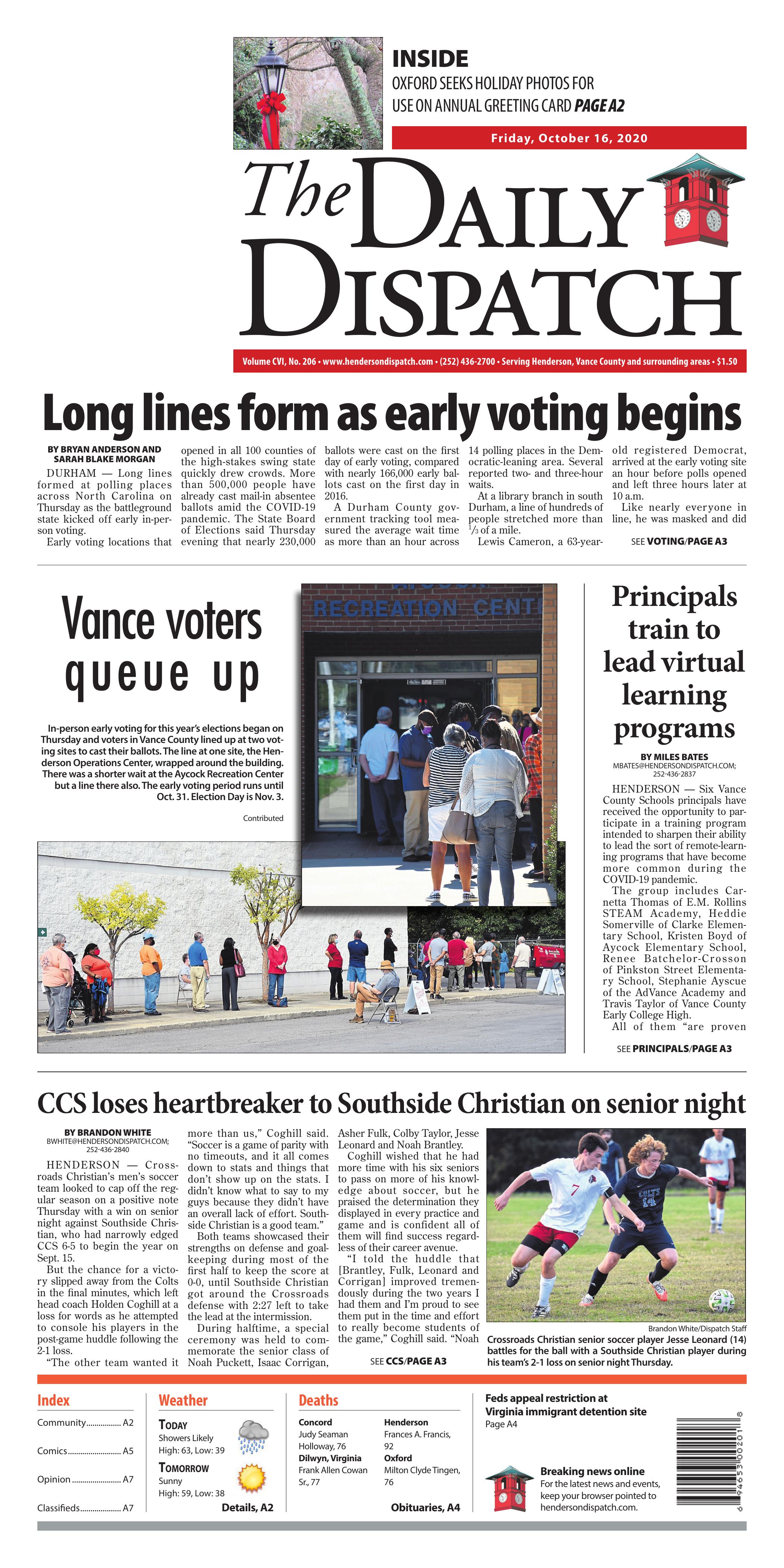 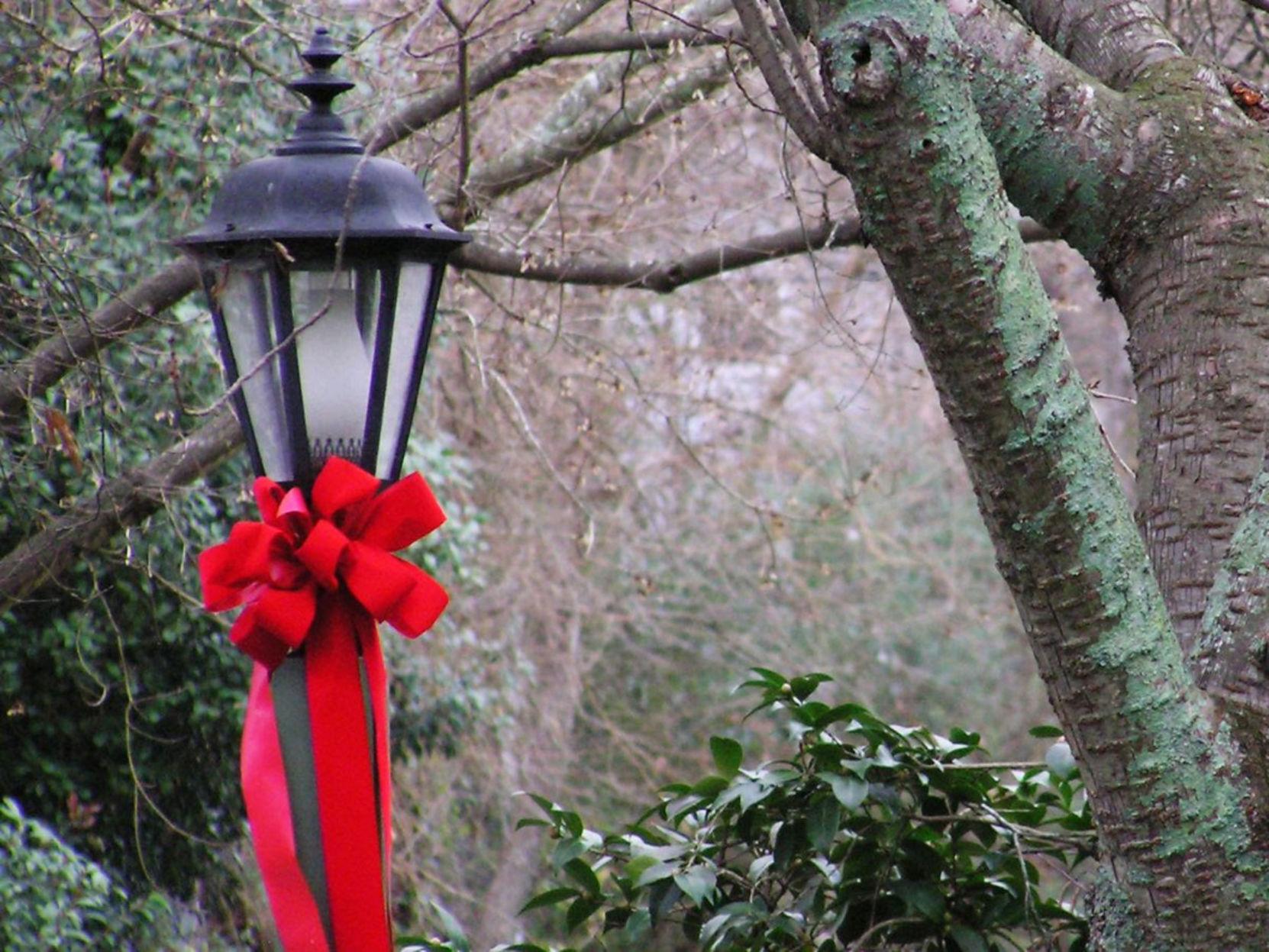 The city of Oxford is looking for photos of holiday scenes like this one to use on its 2020 greeting card.

HENDERSON — Crossroads Christian’s men’s soccer team looked to cap off the regular season on a positive note Thursday with a win on senior night against Southside Christian, who had narrowly edged CCS 6-5 to begin the year on Sept. 15.

But the chance for a victory slipped away from the Colts in the final minutes, which left head coach Holden Coghill at a loss for words as he attempted to console his players in the post-game huddle following the 2-1 loss.

“The other team wanted it more than us,” Coghill said. “Soccer is a game of parity with no timeouts, and it all comes down to stats and things that don’t show up on the stats. I didn’t know what to say to my guys because they didn’t have an overall lack of effort. Southside Christian is a good team.”

Both teams showcased their strengths on defense and goalkeeping during most of the first half to keep the score at 0-0, until Southside Christian got around the Crossroads defense with 2:27 left to take the lead at the intermission.

Coghill wished that he had more time with his six seniors to pass on more of his knowledge about soccer, but he praised the determination they displayed in every practice and game and is confident all of them will find success regardless of their career avenue.

“I told the huddle that [Brantley, Fulk, Leonard and Corrigan] improved tremendously during the two years I had them and I’m proud to see them put in the time and effort to really become students of the game,” Coghill said. “Noah and Colby only played this year for me and I really wish I could have coached them two years as well, but they have been great additions for us in the locker room and out on the field.”

Senior leadership proved to be crucial for CCS in the second half as they increased their aggression on Southside Christian’s side of the field. But a freshman, Noah Newbern, wound up becoming the one to even the score at 1-1 following an excellent corner kick from junior Ryan Adcock.

Southside Christian stayed alert on defense as Adcock, freshman Will Alston and the rest of the CCS roster did everything they could to find a weakness in their opponent’s defense, all while the game clock continued to wind down.

After withstanding shot after shot, Southside Christian finally went on the offensive and made its way towards Crossroads territory, where they proceeded to score their second goal of the game after Edwards was unable to corral a header.

The Colts tried to respond with only a handful of minutes remaining, but they could not find the look they were looking for and had to settle for a 2-1 loss, dropping their record to 2-6 on the year.

Coghill said that some of the struggles that have plagued the team during the shortened 2020 campaign come down to its overall lack of experience despite having six seniors, but he knows that the program is talented enough to win games and expects those issues to be resolved in due time.

“It came down to our failure to put out little fires,” Coghill said. “When you can’t do that, the whole apartment building burns down. We created more chances in that game and if you didn’t look at the scoreboard, you would have thought we were the better team. For whatever reason, we can’t collectively assess some of these dangers in key situations.”

Crossroads now has to wait to see where it will be placed in the NCISAA 1A playoffs on Sunday evening, with its first game taking place on either Tuesday or Thursday.

HENDERSON — Six Vance County Schools principals have received the opportunity to participate in a training program intended to sharpen their ability to lead the sort of remote-learning programs that have become more common during the COVID-19 pandemic.

All of them “are proven experienced leaders who are among some of the best in the state,” Vance County Schools Superintendent Tony Jackson. “We are extremely fortunate to have them leading our schools, and supporting students during this very challenging time.”

The six will participate in the inaugural cohort of the Distinguished Leadership in a Remote Learning Environment program, developed by the N.C. Principals and Assistant Principals’ Association in partnership with the N.C. Department of Public Instruction and the N.C. Alliance for School Leadership Development.

They were among more than 1,800 applicants from across North Carolina, representing 62 school districts and 13 charter schools.

They and others in the program’s first cohort started their training on Oct. 5 and will continue it through February, VCS Public Information Officer Aarika Sandlin said.

Perhaps fittingly, the training is itself completely virtual.

Participants will join facilitated Zoom conferences, online activities, virtual interactions with peers and facilitators, and structured sharing sessions, according to the principals’ association.

They will try to develop “a shared vision for high-quality instruction in a remote and hybrid learning environment,” figure out how to evaluate and coach the teachers who have to implement that environment and “create a collaborative culture of high expectations for students and staff” in remote-learning environments, VCS officials said.

“Our school leaders are responding to the urgency to strengthen their ability to lead effective virtual and hybrid learning in their schools,” said Shirley Prince, executive director of the N.C. Principals and Assistant Principals’ Association. “ If their students are going to be successful throughout these challenging times, their deliberate and focused instructional leadership will be more important than ever.”

The training will include modules on quality instruction, coaching and evaluation, and culture and equity, Sandlin said.