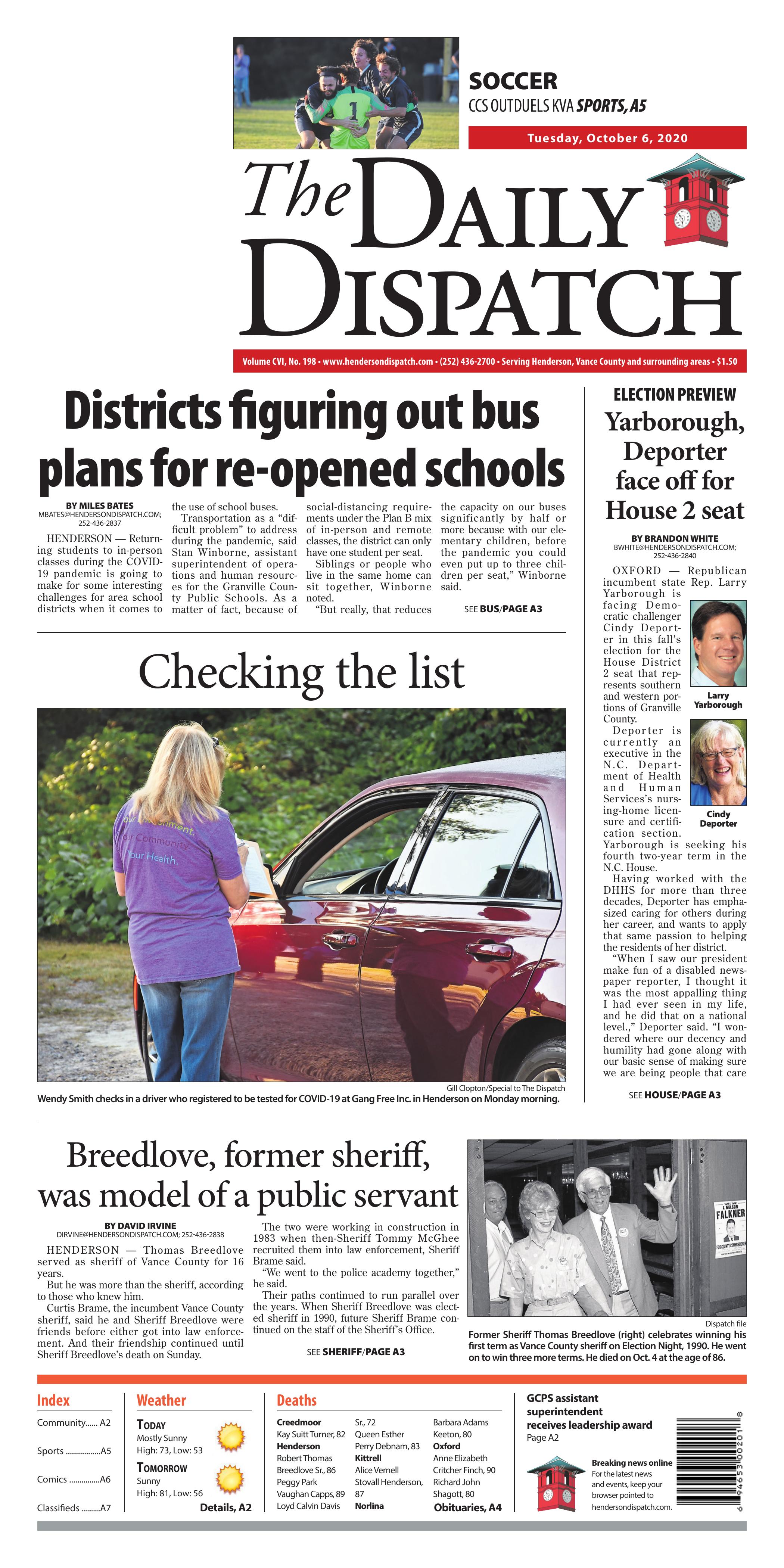 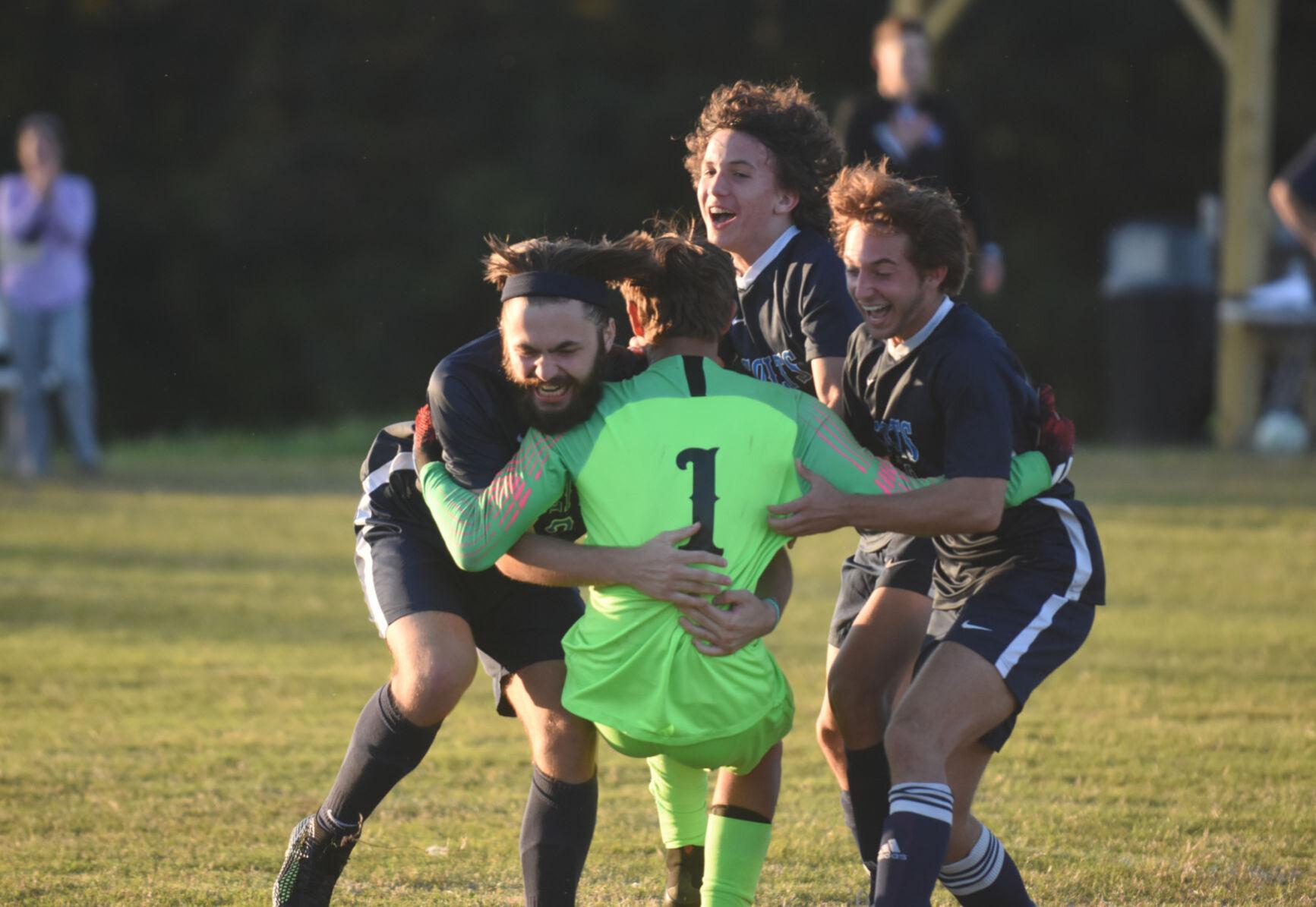 Crossroads Christian soccer players Asher Fulk (left), Will Alston (center) and Ryan Adcock (right) tackle goalkeeper Gage Edwards (1) to the ground in celebration after the latter made two crucial stops to secure a 3-3 (4-1) win in penalty kicks for his team against Kerr-Vance Academy on Monday evening.

HENDERSON — Returning students to in-person classes during the COVID-19 pandemic is going to make for some interesting challenges for area school districts when it comes to the use of school buses.

Transportation as a “difficult problem” to address during the pandemic, said Stan Winborne, assistant superintendent of operations and human resources for the Granville County Public Schools. As a matter of fact, because of social-distancing requirements under the Plan B mix of in-person and remote classes, the district can only have one student per seat.

Siblings or people who live in the same home can sit together, Winborne noted.

“But really, that reduces the capacity on our buses significantly by half or more because with our elementary children, before the pandemic you could even put up to three children per seat,” Winborne said.

“What this does, particularly when we shift to Plan A [a full resumption of in-person classes], if the requirements on buses remain the same, we will probably have to run double routes, which means some children will get to school later than others because we don’t have a large number of surplus buses.”

Also, the Granville district doesn’t have any surplus bus drivers. It in fact has a shortage of bus drivers and has been trying to recruit more, Winborne said.

In Warren County, officials will “be looking at a couple of things,” including the possibility of having “multiple adults on buses to ensure social distancing” when in-person classes eventually resume, said Andrew Stewart, chief operations officer of the Warren County Schools.

The district is operating under Plan C — all classes via remote learning — for its first semester and has indicated it will move to the Plan B mix of remote and in-person classes when COVID-19 cases have been reduced, according to a tracker maintained by the N.C. School Boards Association.

Even under Plan B, “we will probably … be looking at the possibility of a bus running a double route,” Stewart said. “Each bus having to run a double route would possibly be what we would look to do.”

The Vance County Schools system, on the other hand, has enough school buses to handle the district opening back up under Plan B, said David Cooper, the district’s director of transportation.

“To handle social distancing, drivers may have to complete multiple runs in the morning and afternoon to meet the requirements, Cooper said. “But we are certain we have the fleet to handle it.

“Students will have assigned seats and buses will be cleaned and disinfected before, after, and between route runs,” he said. “Each bus is outfitted with a hand sanitizer station as students board the bus, and drivers will be provided materials — masks, face shields, hand sanitizer, etc. — to help protect them. We are working closely with district leadership and communicating with other area school systems about how to best proceed with our preparations when students return to school.”

That said, the Vance district remains under Plan C, so the buses are not being used. District Public Information Officer Aarika Sandlin the system “is on Plan C until our Board of Education decides otherwise.” 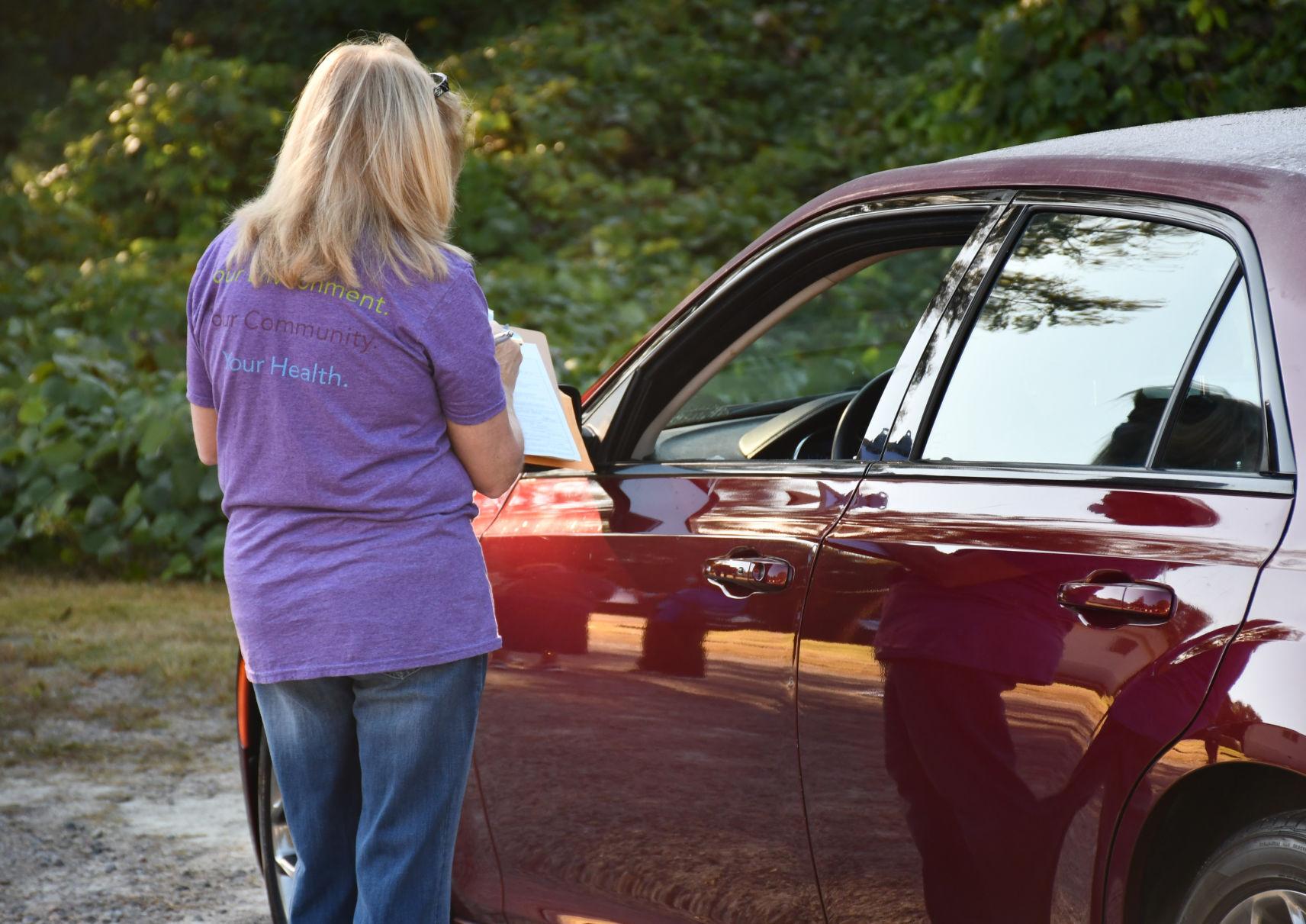 Wendy Smith checks in a driver who registered to be tested for COVID-19 at Gang Free Inc. in Henderson on Monday morning.

Former Sheriff Thomas Breedlove (right) celebrates winning his first term as Vance County sheriff on Election Night, 1990. He went on to win three more terms. He died on Oct. 4 at the age of 86.

But he was more than the sheriff, according to those who knew him.

Curtis Brame, the incumbent Vance County sheriff, said he and Sheriff Breedlove were friends before either got into law enforcement. And their friendship continued until Sheriff Breedlove’s death on Sunday.

The two were working in construction in 1983 when then-Sheriff Tommy McGhee recruited them into law enforcement, Sheriff Brame said.

“We went to the police academy together,” he said.

Their paths continued to run parallel over the years. When Sheriff Breedlove was elected sheriff in 1990, future Sheriff Brame continued on the staff of the Sheriff’s Office.

“He always supported his officers,” he said, recalling how Sheriff Breedlove and his wife provided Christmas dinner for the staff.

Sheriff Breedlove also was able to bridge the gap between law enforcement and the community.

“He treated everybody the same,” Sheriff Brame said.

Sheriff Brame was elected to the job in 2018, succeeding former Sheriff Peter White.

“When I was elected sheriff, people asked me ‘Are you going to be a McGhee, a Breedlove or a White?’ ” Sheriff Brame said. “I said, ‘I’m going to be a little bit of all of them.’ ”

His assessment of Sheriff Breedlove was reinforced by Capt. L.Q. Watkins, who currently serves in the Vance County Sheriff’s Office.

Sheriff Breedlove “was a downright good sheriff,” Capt. Watkins said. “He was a good leader. He was fair.”

Capt. Watkins said Sheriff Breedlove had an open-door policy for the public and the staff. “You could go and talk to him,” he said.

He added, “He was keen on us being professional in treating the public.”

The Rev. Frank Sossamon, pastor of South Henderson Pentecostal Holiness Church, is a long-time friend of Sheriff Breedlove whose friendship with him continued during and after his tenure.

“I knew him before he became sheriff,” Rev. Sossamon said.“I was chaplain for the Sheriff’s Department when he was sheriff. I was minister to him and his wife through the years. I conducted his wife’s funeral.”

“He was a ‘people person.’ As sheriff, he mingled with people,” Rev. Sossamon said. He gave as an example Breedlove’s assistance to a person who locked his key in his car. “Because he liked people, he did those things.”

“We had a great working relationship,” former Commissioner Wright said.

He described Sheriff Breedlove as a great public servant, then added, “He was a tough sheriff, but a prince of a gentleman.”

Deporter is currently an executive in the N.C. Department of Health and Human Services’s nursing-home licensure and certification section. Yarborough is seeking his fourth two-year term in the N.C. House.

Having worked with the DHHS for more than three decades, Deporter has emphasized caring for others during her career, and wants to apply that same passion to helping the residents of her district.

“When I saw our president make fun of a disabled newspaper reporter, I thought it was the most appalling thing I had ever seen in my life, and he did that on a national level.,” Deporter said. “I wondered where our decency and humility had gone along with our basic sense of making sure we are being people that care about others and make sure our most vulnerable are protected.”

Along with voicing her displeasure towards President Donald Trump and his policies, Deporter is critical of many acts of legislation passed by the N.C. General Assembly, and said it has not done enough for minority and women’s rights in the state. She has also been disappointed in the General Assembly’s lack of action on Medicaid expansion, with the COVID-19 pandemic leaving thousands of people unemployed.

But going to Raleigh means first unseating Yarborough, who has held the seat since defeating Democrat Ray Jeffers in the 2014 November general election.

He currently serves on 10 different legislative committees, including the special panel House leaders set up to address the pandemic.

He has also sought to provide his constituents relief from regulations intended to reduce the amount of two key nutrients, nitrogen and phosphorus, that reach Falls Lake.

Yarborough said that it is unfair for Granville County residents to pay a stormwater tax because of the rules, as Falls Lake serves as a water source exclusively for Wake County. He has also been critical of the South Granville Water & Sewer Authority and is expecting that organization to find a way to pay for upgrading their water treatment plant.

Outside of Granville County, Yarborough said that he has become concerned about the protests that have taken place across the country in the wake of George Floyd’s death and supports President Donald Trump’s call to have police control the situation if demonstrations turn violent.

“We’ve seen our capital allowed to be practically destroyed,” he said. “If you go to downtown Raleigh right now, it looks like there’s a hurricane coming with boards on all the windows and there’s no one on the streets.”

He added that he is opposed to the idea of having police departments around the country “defunded’ during the ongoing unrest, which involves reallocating money from police and sheriff’s departments to social services, housing, education and healthcare.

Deporter said that she has been working hard to learn about the intricacies of the state political system during the last few months, but also intends to use her knowledge on health care and the rules and regulations associated with it to her advantage.

Deporter said she cares about every single person in Granville and Person counties, and will meet with her constituents while abiding by the current social distancing guidelines so that she can make decisions based off their wants and needs.

“I put off retirement so I could make sure I was comfortable with everything regarding the pandemic,” Deporter said. “I think that I’m very outspoken and I try to get to the point, and I think those are very important qualities. If I don’t know something, I will tell you up front, but I do a good job of bringing people to the table and I am not afraid to roll up my sleeves so I know exactly what’s going on with the community.”