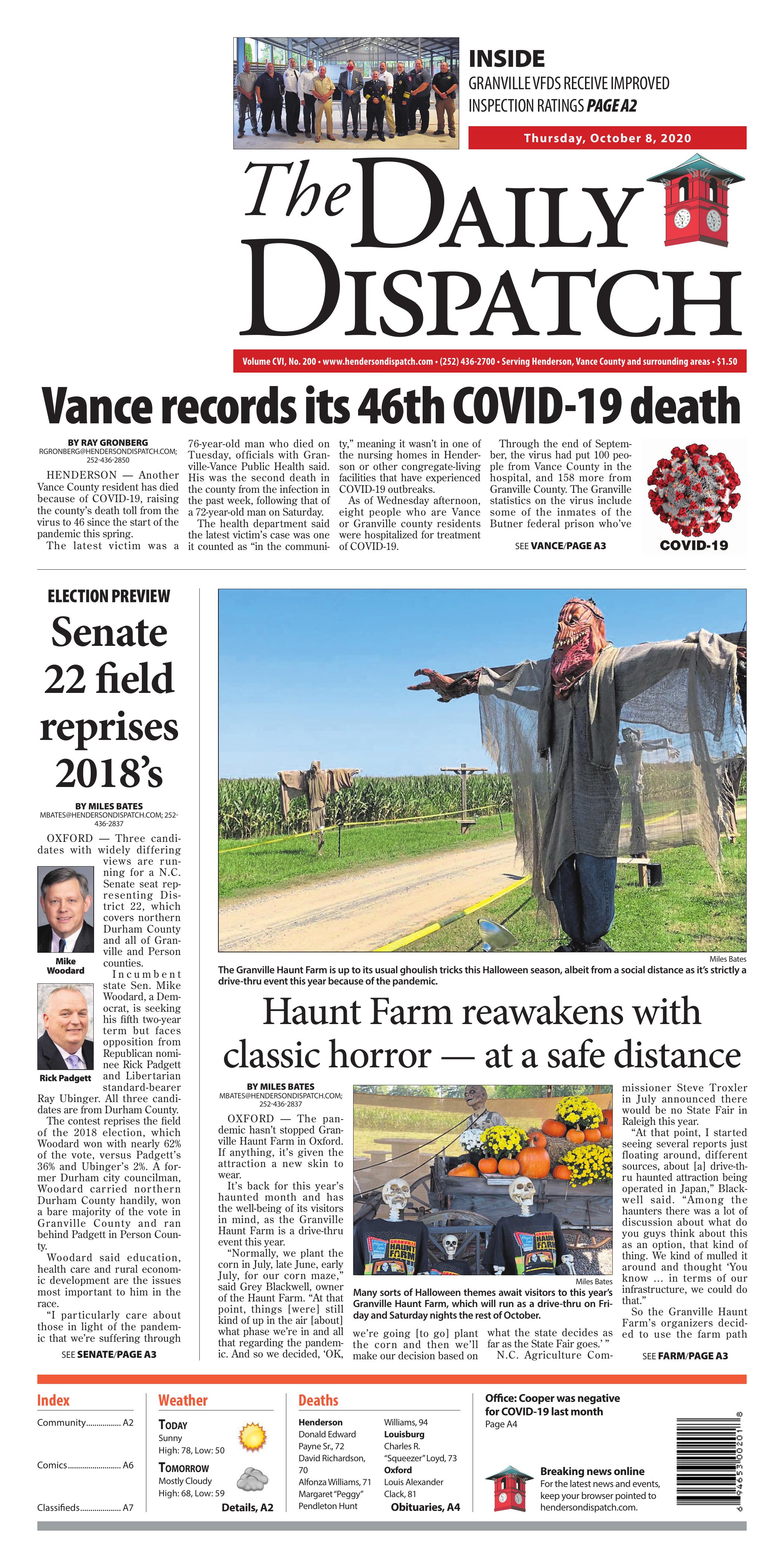 HENDERSON — Another Vance County resident has died because of COVID-19, raising the county’s death toll from the virus to 46 since the start of the pandemic this spring.

The latest victim was a 76-year-old man who died on Tuesday, officials with Granville-Vance Public Health said. His was the second death in the county from the infection in the past week, following that of a 72-year-old man on Saturday.

The health department said the latest victim’s case was one it counted as “in the community,” meaning it wasn’t in one of the nursing homes in Henderson or other congregate-living facilities that have experienced COVID-19 outbreaks.

As of Wednesday afternoon, eight people who are Vance or Granville county residents were hospitalized for treatment of COVID-19.

Through the end of September, the virus had put 100 people from Vance County in the hospital, and 158 more from Granville County. The Granville statistics on the virus include some of the inmates of the Butner federal prison who’ve taken ill or died from it, but not all because part of the prison is in Durham County.

The health department said Wednesday it was monitoring 170 active cases of COVID-19, with 88 of those being in Granville County and 82 in Vance County.

There have been 50 deaths because of the virus in Granville County, with 22 of those being inmates of the Butner prison. Four other inmates and a prison guard who’ve died aren’t included in the Granville total, because those inmates were housed in the Durham County portion of the facility and the guard lived in Winston-Salem.

All told, 1,058 residents of Vance County have tested positive for the virus, along with 1,810 people living in Granville County.

N.C. Department of Health and Human Services officials report that about 4.9% of the COVID-19 tests they know were administered to Vance County residents in the past two weeks have confirmed the presence of the coronavirus.

In Granville County, about 3.5% of the tests of residents in the past two weeks have done likewise.

Across the state, the virus is showing up in about 6.4% of the tests DHHS has heard about in the past two weeks. The worst numbers, all above 10%, are in Nash, Robeson and Scotland counties.

State officials want to see a declining percentage of positive tests over any given two-week period. But the percentage, aggregated using a rolling average of the most recent week’s worth of results, has been on the rise across the state since about Sept. 20.

OXFORD — The pandemic hasn’t stopped Granville Haunt Farm in Oxford. If anything, it’s given the attraction a new skin to wear.

It’s back for this year’s haunted month and has the well-being of its visitors in mind, as the Granville Haunt Farm is a drive-thru event this year.

“Normally, we plant the corn in July, late June, early July, for our corn maze,” said Grey Blackwell, owner of the Haunt Farm. “At that point, things [were] still kind of up in the air [about] what phase we’re in and all that regarding the pandemic. And so we decided, ‘OK, we’re going [to go] plant the corn and then we’ll make our decision based on what the state decides as far as the State Fair goes.’ ”

N.C. Agriculture Commissioner Steve Troxler in July announced there would be no State Fair in Raleigh this year.

“At that point, I started seeing several reports just floating around, different sources, about [a] drive-thru haunted attraction being operated in Japan,” Blackwell said. “Among the haunters there was a lot of discussion about what do you guys think about this as an option, that kind of thing. We kind of mulled it around and thought ‘You know … in terms of our infrastructure, we could do that.”

So the Granville Haunt Farm’s organizers decided to use the farm path between two corn fields and the zombie paintball hayride, creating a loop with “several themes” set up around it.

“But then it became a question of, ‘Well, how would our customers react to that?’ ” Blackwell said.

Blackwell made the announcement on social media a few weeks ago and said it “just took off like gangbusters, immediately went viral. People passing it around, ‘Look at this, this looks cool.’ ”

The response has been, he said, “overwhelmingly positive.” Blackwell said he has been “pleasantly surprised” because he was “really nervous” about how people would react to it.

The Haunt Farm will be open for four weekends, with opening night due up this Friday. It’ll run on Friday and Saturday nights through Halloween. “.

“We’re not going to try to do Sunday nights,” Blackwell said. “Most of my employees are of school age. Sunday night would be a school night for most of them.”

With the return comes a familiar relationship.

Granville Haunt Farm is doing the cross promotion with the Raleigh Road Outdoor Theatre again this year. The theater, which Blackwell said has been “really supportive,” runs a promotional video for the haunt farm before airing its movies each night. The farm also has a banner on its fence advertising the theater, along with a drive-in movie theme on its haunted trail.

Last year, the entrance of the haunted trail was “you walked into a movie screen that was playing trailers of old horror movies, and then the scenes were those movies coming to life,” Blackwell said. “This year we’re expanding that. In terms of logistics, we couldn’t figure out a way to make it so that you actually drove through the screen and still see the movie. But it will be off to the side as you drive past. You’ll see … movie clips being played, and then as you drive through, you’ll see those movies come to life and your favorite horror movie characters, with some from last year but also a few new ones that we’ve added for this year.”

The themes will include things like the Michael Myers house from the “Halloween” franchise, Pinhead from the “Hellraiser” franchise and Leatherface of “The Texas Chainsaw Massacre” film series.

The path is essentially a big loop, and speed bumps will be used. The actors will maintain 6 feet of social distancing from passing vehicles, “so they won’t even get close enough to touch your vehicle,” Blackwell said.

He added that he’s sold more advanced tickets this year than he ever has going into opening weekend.

OXFORD — Three candidates with widely differing views are running for a N.C. Senate seat representing District 22, which covers northern Durham County and all of Granville and Person counties.

The contest reprises the field of the 2018 election, which Woodard won with nearly 62% of the vote, versus Padgett’s 36% and Ubinger’s 2%. A former Durham city councilman, Woodard carried northern Durham County handily, won a bare majority of the vote in Granville County and ran behind Padgett in Person County.

Woodard said education, health care and rural economic development are the issues most important to him in the race.

“I particularly care about those in light of the pandemic that we’re suffering through now and thinking about … as we move out of the pandemic over the next year and a half or however how long we think it takes, and the resulting economic crisis that’s brought on, how [we] recover from that and continue to focus on those areas,” he said.

He claimed “a broad and a deep understanding of the challenges we face but also of the opportunities that our communities have” thanks to elected and volunteer community service that spans 30 years. His prior terms in the Senate also have given him seniority in the chamber, he noted.

Padgett, a former Durham County Sheriff’s Office captain, is seeking to win his first election in multiple tries for public office. He first ran, as a Democrat, for a Durham County Commissioners seat in 2012 but finished 10th in a field of 14.

He is running this time as an opponent of what he calls “the war on police” — which he said “has allowed those who were already committing crimes to have an excuse to continue their behavior — and an advocate for improvements to the state’s system of mental health care.

He said elected officials have “turned a blind eye” to existing problems with mental health care.

“While these career politicians are entrenched with their lack of concern, those in need will continue to struggle,” he said. “We must send a loud message to the incumbent career politicians that their playtime in the Raleigh sandbox is over. We need to centralize resources to provide a better quality of care for those within our community in immediate need.”

Ubinger, who works at Duke University as a clinical research data manager, also has multiple unsuccessful runs for public office to his credit, starting with a 1996 campaign run for the U.S. Senate as the Libertarian nominee against Republican incumbent Jesse Helms and Democratic challenger Harvey Gantt. He’s run for N.C. House and Senate several times since then.

He said that if he wins, his top priority would be to “de-rig” elections, including by repealing restrictions on write-in voting.

“Then we’ll find out who should really be in office and then we can talk about policy,” Ubinger said. “But this issue cuts to the root and it paints the whole system. Nothing [is] more basic and more important than restoring voting rights.”

Ubinger said he isn’t campaigning, but would be happy to serve if elected.