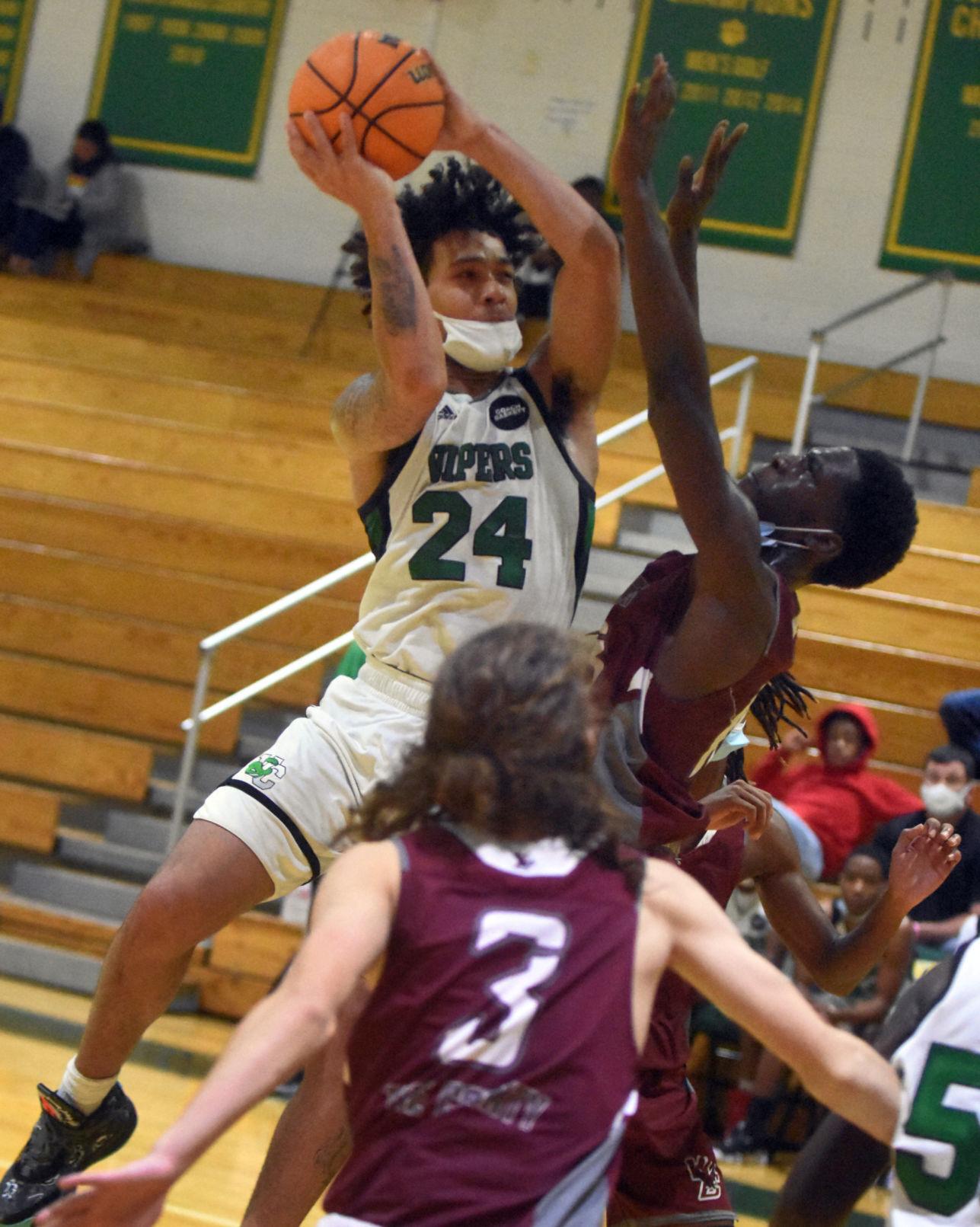 Vance County basketball player Traejon Davis (center) gets challenged at the rim by the Warren County defense during his team's 44-35 victory in the final day of the Bunn Christmas Tournament on Wednesday, the Vipers' first of the 2021-22 season.

Henderson Police Department officer Tyler McDaniel (left) confers by phone with other investigators about a shooting on Wednesday that injured two women. The Police Department’s Sabrina Hoyle and Shauna Terry (right side, left and right, respectively) were also working the case. The shooting happened on Kittrell Street, but the women were in a car that traveled to Powell Street, where the police and authorities were summoned.

HENDERSON — Two women were injured Wednesday in a shooting that happened in northern Henderson.

Police Chief Marcus Barrow said the incident happened at about 2:15 p.m. and began when someone fired from a residence on the 200 block of Kittrell Street at a burgundy Honda that carried four people.

The car stopped on nearby Powell Street, with medics, police and other emergency personnel responding to the scene. The two women, both passengers in the car, were the only people injured, and ambulances took them to area medical facilities for treatment, Barrow said.

The chief declined to say anything about their condition. “For safety reasons, their names and injuries will not be released at this time,” he said.

The driver and a third, rear-seat passenger in the car were not injured, Barrow said. The passenger, a man, fled from the scene before police arrived. 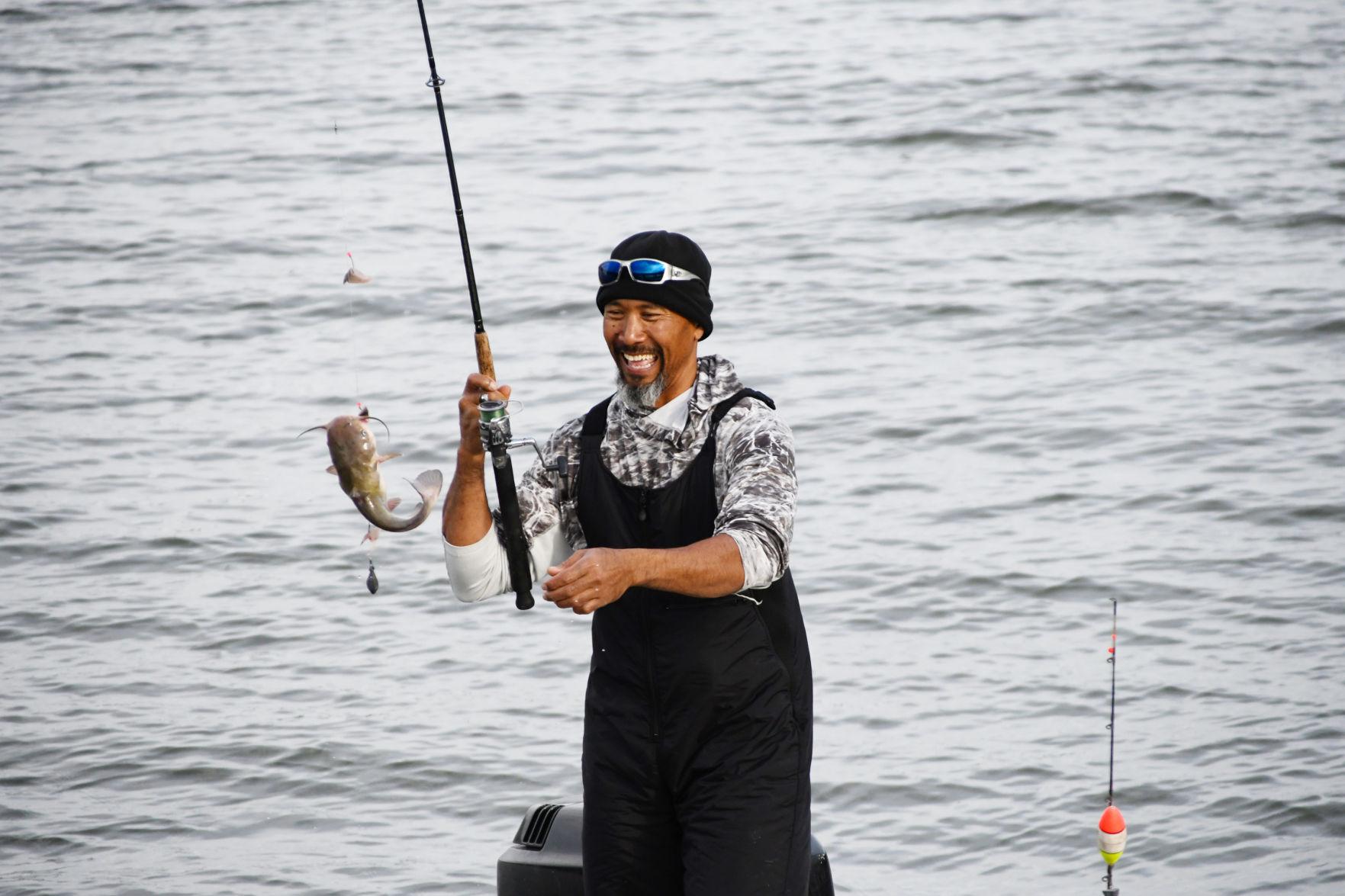 December’s unseasonably warm weather proved to be a good time for anglers to try their luck on Kerr Lake. A few boats trolled the waters around Nutbush bridge Wednesday morning, Dec. 29, on a day that temperatures were expected to reach the mid-70s. Kris Sharma and Ketut Sudipo, of Raleigh, might have been there regardless of the warm weather. Deploying several lines from their boat, they landed an 8-pound striper on a windy Wednesday morning. Left: Ketut Sudipo, of Raleigh, snags a small bass near Nutbush bridge, much to his delight. Middle: Kris Sharma ,holding fish, and Ketut Sudipo of Raleigh landed an 8-pound striper on a windy Wednesday morning near Nutbush bridge. Right: Unseasonably warm weather on a Wednesday in December, with temperatures expected to reach the mid-70s, didn’t bring many fishermen to the walkway at Nutbush bridge in the morning, but a few boats were out and about, trying their luck.

Arianespace’s Ariane 5 rocket is seen in this false color infrared exposure as it launches with NASA’s James Webb Space Telescope on board on Dec. 25 from Europe’s Guiana Space Centre in Kourou, French Guiana. The James Webb Space Telescope (sometimes called JWST or Webb) is a large infrared telescope with a 21.3-foot primary mirror. The observatory will study every phase of cosmic history — from within our solar system to the most distant observable galaxies in the early universe.

The James Webb Space Telescopes dwarfs technicians assigned to prepare it for launch. An Ariane 5 rocket boosted the instrument into space on Dec. 25.

This image shows the James Webb Space Telescope atop its launch vehicle, before technicians completed the rocket’s assembly by installing an aerodynamic fairing over the instrument.

On Dec. 11, technicians secured NASA’s James Webb Space Telescope to the top of the Ariane 5 rocket launched it to space from Europe’s spaceport in French Guiana. The instrument is named for Granville County native James E. Webb, NASA’s head man during the early days of the Apollo program in the 1960s.

Launch teams monitor the countdown of the launch of Arianespace’s Ariane 5 rocket carrying NASA’s James Webb Space Telescope on Dec. 25, 2021, in the Jupiter Center at the Guiana Space Center in Kourou, French Guiana.

OXFORD — A distinguished Granville County family name is now hurtling through space, destined to take its place a million miles from Earth and write a new page in the annals of space exploration.

The James Webb Space Telescope was launched on Christmas Day bearing, not gifts from the Magi, but a payload of scientific equipment designed to reveal secrets sequestered in the far reaches of the universe.

It also bears the name of a son of Oxford. James E. Webb was one of five children of John Frederick Webb, who served for 28 years as superintendent of Granville County Schools and for whom J.F. Webb High School is named.

James Webb was born in the Tally Ho community in Granville County and lived and went to school in Oxford. He had a distinguished career in the private sector and in government, beginning in the 1930s and continuing through the 1960s, including service in the U.S. Marines during World War II.

But it is as administrator of the National Aeronautics and Space Administration that he is best remembered.

Tapped for the position in 1961 by President John F. Kennedy, Webb guided NASA through the Apollo program, resigning at the change of administrations only months before Neil Armstrong took his “giant step for mankind” onto the surface of the Moon in 1969.

Webb had been reluctant to accept the appointment as director of NASA. Asked in a 1985 interview what changed his mind, he described meeting with President Kennedy and said, “Well, how could you turn down the president of the United States when he says, here’s exploration, reaching outward from the Earth, which involves great national and international policy questions? ‘I want you to handle it because those are the policies that interest me in my job as president.’ ”

Webb’s daughter, Sally, who now lives in California, said she finds what he did with NASA incredible, pointing out that Webb’s college degree was in education. He had no science background, although “he did a lot of studying on his own.” In addition, she said he had to deal with some big egos among the scientists and astronauts he worked with.

“He had to balance that stuff,” she said.

What stands out, she said, was his integrity and his honesty. “He was very patriotic,” she said, and “he loved North Carolina.”

Kathy Webb, daughter of John Frederick Webb Jr., said, “I grew up hearing about Uncle Jim. He was like a role model.”

The James Webb Space Telescope uses infrared technology, which will allow it to see objects farther away and more clearly than the Hubble Space Telescope. It may help scientists observe the first galaxies formed after the Big Bang and determine how they evolved and how planets were formed.

And it might provide an answer to that question Webb didn’t answer for his niece about the possibility of life in those far away systems.

Webb received many honors for his career, perhaps none more meaningful than having a historical marker placed in front of C.G. Credle Elementary School on College Street in Oxford. It reads: “James E. Webb 1906 — 1992 Led NASA, 1961 to 1968, during Mercury, Gemini, and early Apollo. He est. Johnson, Kennedy space centers. Lived 1 blk. W.”

Sally Webb was there in March 2019 for the dedication of the marker. “I was touched.” she said. “He never knew about it.”

Now the name that first saw the light of day in Tally Ho is on its way to deep space. As Mark Pace, history specialist with the Richard H. Thornton Library, said, “He came from a small place and did big things.” 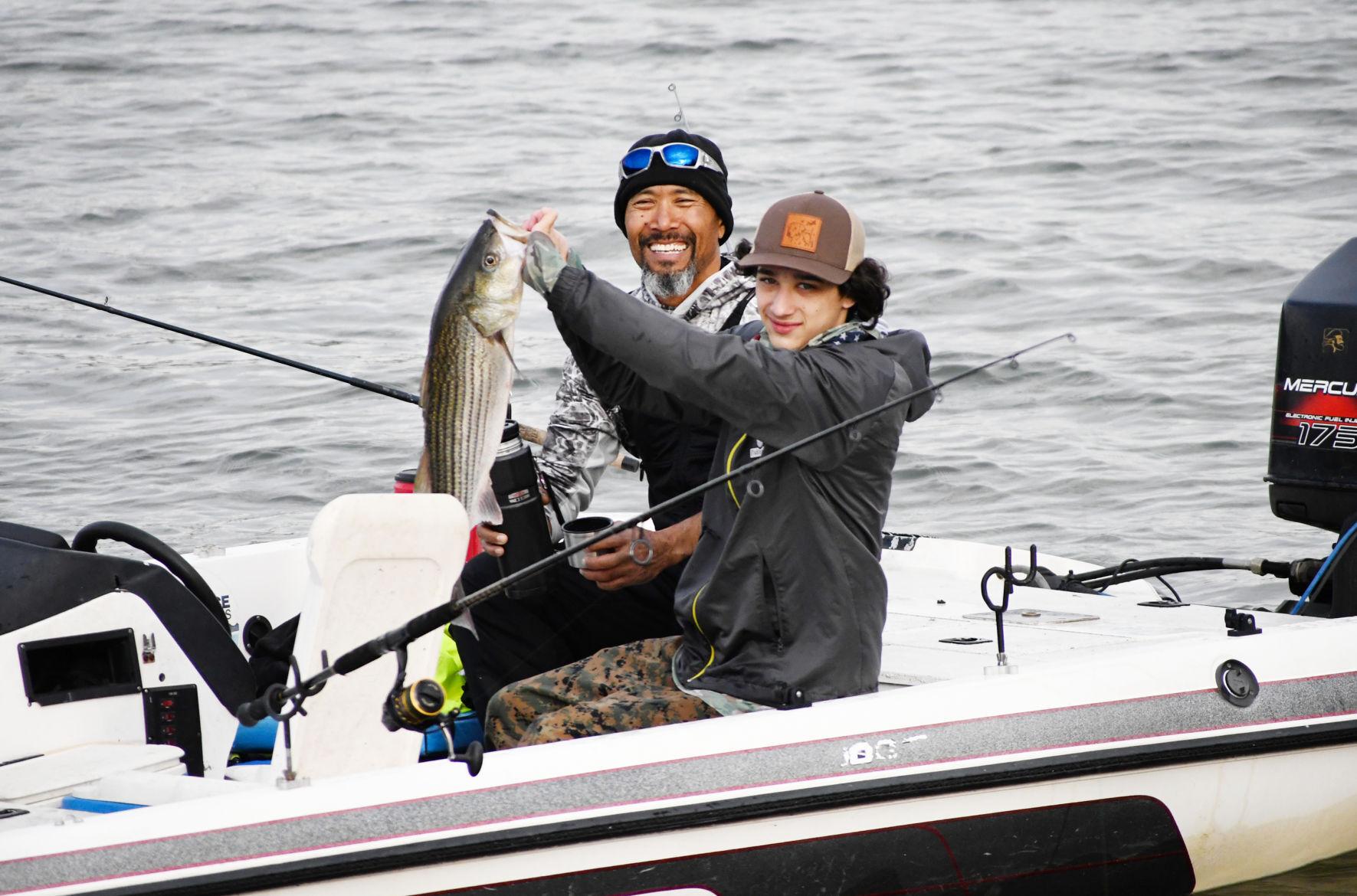 The Henderson Police Department is seeking a Vantage Tactical Remote Control Robot, like this one manufactured by California’s Transcend Robotics.

HENDERSON — The Henderson Police Department is seeking to make the city safer through robotic means.

Earlier this month, the City Council approved an application for N.C. Governor’s Crime Commission grant funding for a remote-control police robot priced at $25,500. The city would provide $1,000 in matching local funds, with the state covering the rest.

“This is a tool for officer safety and public safety,” Police Chief Marcus Barrow said. “We want to utilize this item for surveying unknown situations such as hazardous materials, suspicious packages, communication with barricaded people, and many other applications.”

“This will be the first item of this kind in the region,” Barrow added, “but much like the drone, robots have become an irreplaceable tool in law enforcement.”

The robot is officially known as the Vantage Tactical Remote Control Robot, manufactured by Transcend Robotics in San Diego.

“This technology is critical to officer safety,” according to Transcend Robotics, “because of its high success rate climbing obstacles and stairs while not requiring the officer to manually control the robot to pre-position itself to climb an obstacle.”

Also included in the robot’s features are:

Transcend Robotics adds that the unit is a “perfect response for barricaded subjects, room cleaning, crisis intervention, and many other situations across patrol, SWAT and [Explosive Ordnance Disposal] units. The Vantage can be used virtually by anyone with little training.”

Transcend Robotics also features more expensive units that deploy gas canisters and have more flexibility and stronger lifting capacity. The most expensive unit is listed at $110,500.

The Governor’s Crime Commission serves as the chief advisory body to the governor and to the state secretary of public safety on crime and justice issues, and annually awards state and federal grants to North Carolina law enforcement, governmental bodies and related nonprofits.