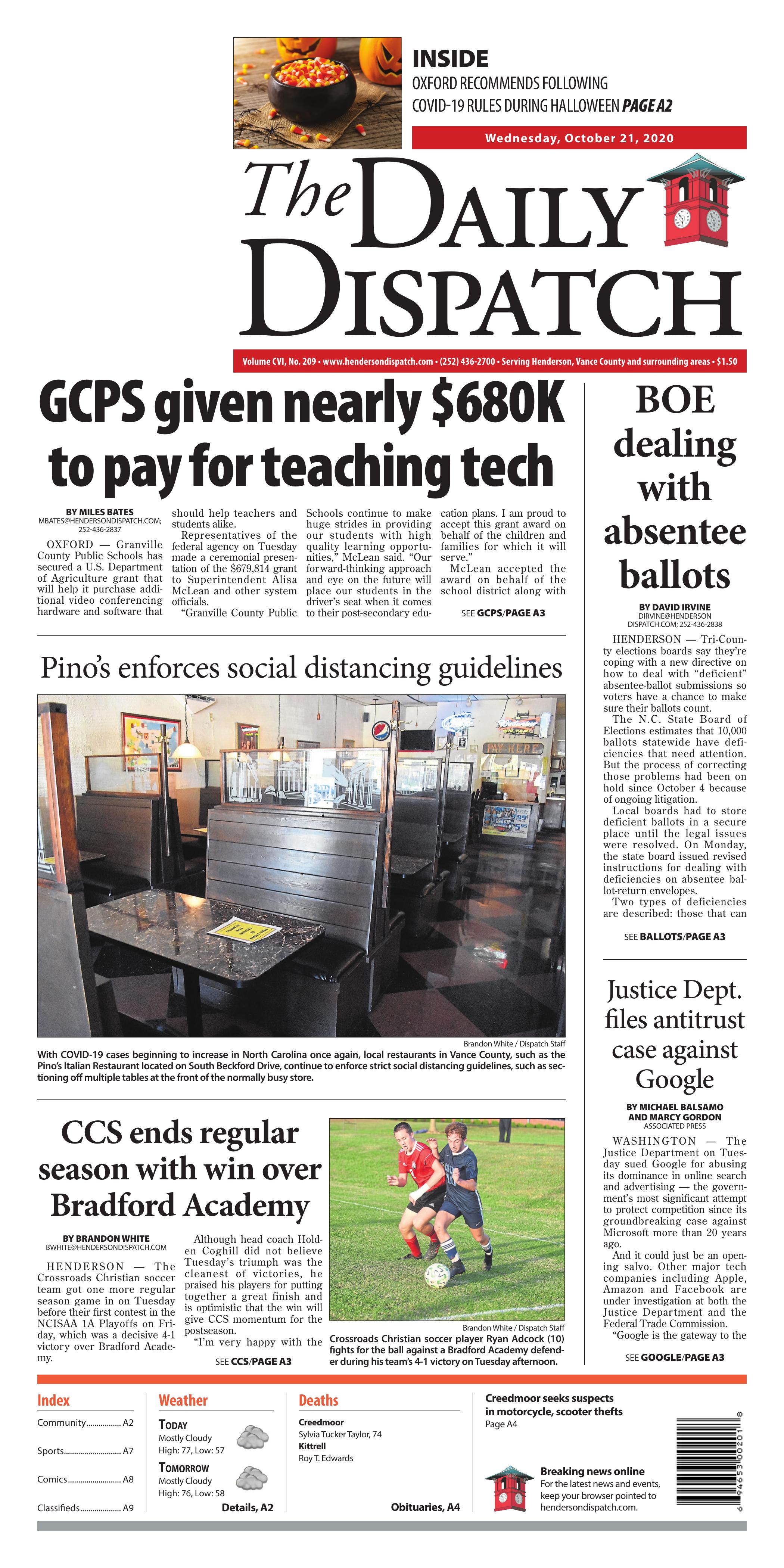 OXFORD — Granville County Public Schools has secured a U.S. Department of Agriculture grant that will help it purchase additional video conferencing hardware and software that should help teachers and students alike.

Representatives of the federal agency on Tuesday made a ceremonial presentation of the $679,814 grant to Superintendent Alisa McLean and other system officials.

“Granville County Public Schools continue to make huge strides in providing our students with high quality learning opportunities,” McLean said. “Our forward-thinking approach and eye on the future will place our students in the driver’s seat when it comes to their post-secondary education plans. I am proud to accept this grant award on behalf of the children and families for which it will serve.”

McLean accepted the award on behalf of the school district along with the Director of Instructional Technology, Gwen Loftin, who actually led the district’s grant-application process. Also on hand for the ceremony were Granville County school board Chairman David Richardson and board member Greg McKnight.

Richardson said local officials are pleased to receive the grant as it should help promote and “many of the exciting efforts” that are underway in the school district.

The grant is part of a set of awards worth $71.5 million to school districts and other institutions across the U.S., and was one of seven such “Distance Learning and Telemedicine Grants” awards USDA made in North Carolina.

The Granville schools’ share of the $4.2 million in federal spending in North Carolina was the third-largest of seven, behind only those given to community colleges in Carteret and Alamance counties.

School system officials said they’ll use the money to “provide video endpoints within schools to create opportunities for video conferencing, which should be useful for distance learning and “work-based learning opportunities” via partnerships with local business and industry.

A USDA summary of the grants said the Granville award will pay for “four main technology combinations,” among them “a large room system for gyms or auditoriums that includes an audio system, projector and large projector screen.” 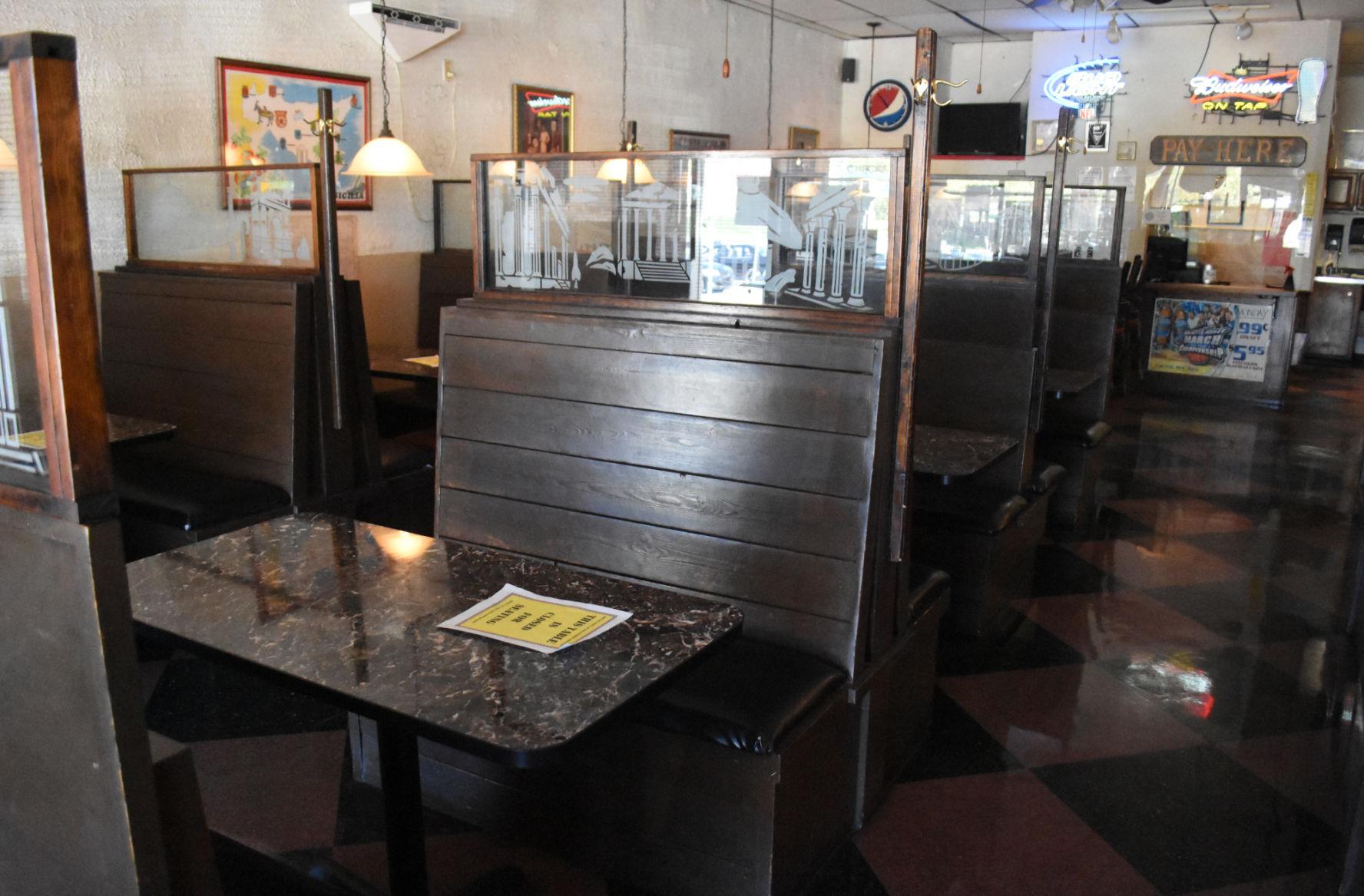 With COVID-19 cases beginning to increase in North Carolina once again, local restaurants in Vance County, such as the Pino’s Italian Restaurant located on South Beckford Drive, continue to enforce strict social distancing guidelines, such as sectioning off multiple tables at the front of the normally busy store.

Crossroads Christian soccer player Ryan Adcock (10) fights for the ball against a Bradford Academy defender during his team’s 4-1 victory on Tuesday afternoon.

HENDERSON — The Crossroads Christian soccer team got one more regular season game in on Tuesday before their first contest in the NCISAA 1A Playoffs on Friday, which was a decisive 4-1 victory over Bradford Academy.

Although head coach Holden Coghill did not believe Tuesday’s triumph was the cleanest of victories, he praised his players for putting together a great finish and is optimistic that the win will give CCS momentum for the postseason.

“I’m very happy with the result,” Coghill said. “It feels very good to get a win going into states. We made some adjustments offensively for the second half and my guys did a really good job of adhering to those adjustments and they executed greatly. Our goalkeeper Gage Edwards also put in his best game of the season, so I’m very proud of him as well.”

CCS attacked Bradford’s side of the field on multiple occasions, which enabled them to obtain several great looks at the net. CCS was unable to capitalize on those opportunities, which forced Coghill and his team to regroup for the second half.

CCS came out strong during the second half with senior Noah Puckett putting his team ahead 1-0 with 36:13 remaining in the game. Freshman Will Alston extended his team’s advantage to 2-0 only a few minutes later after he slipped a shot past the Bradford defense.

Bradford responded with a goal of their own with just over 24 minutes left on the game clock, but a costly own goal by Bradford that was credited to Alston put CCS back up by two goals. Bradford tried to trim down their deficit, but one last goal by junior Ryad Adcock put the game away and gave CCS a 4-1 win.

While Coghill was pleased that CCS managed to improve their overall record to 3-6 on the year, he affirmed that his team is still far from a finished product in regards to communication and discipline, but he addressed those issues with his players after the game in the form of running drills and hopes that everyone comes out strong during the NCISAA 1A Playoffs.

“I don’t like our communication,” Coghill said. “It’s been a point of emphasis that leads to offensive productivity and good defensive chemistry. At times, communication is lacking, and for us to close the huddle out and have a couple of guys talk over me while everyone is quiet on the field, I wasn’t OK with that. We want the best out of our players and I think they received the message properly.”

CCS will travel to Ahoskie to face off against an undefeated Ridgecroft program on Friday afternoon.

HENDERSON — Tri-County elections boards say they’re coping with a new directive on how to deal with “deficient” absentee-ballot submissions so voters have a chance to make sure their ballots count.

The N.C. State Board of Elections estimates that 10,000 ballots statewide have deficiencies that need attention. But the process of correcting those problems had been on hold since October 4 because of ongoing litigation.

Local boards had to store deficient ballots in a secure place until the legal issues were resolved. On Monday, the state board issued revised instructions for dealing with deficiencies on absentee ballot-return envelopes.

Two types of deficiencies are described: those that can be “cured” by a certification signed by the voter, and those that require the voter to complete a new ballot.

Deficiencies that can be cured by certification include failure of the voter to sign the voter certification; the voter signed in the wrong place; the witness (or person assisting the voter) did not print their name or address; or they signed on the wrong line.

A new ballot must be reissued to a voter if there is no witness (or assistant) signature, or if the envelope arrives at the county board unsealed.

The Vance County Board of Elections had to deal with 95 deficient ballots, Director Faye Gill said. New ballots were sent to 49 voters and certification letters were sent to 46.

“Some of them had come in and voted, which helped a lot,” Gill said.

Warren County’s board received 29 deficient ballots, Elections Director Debbie Formyducal said. All of the ballots were handled by mailing certificates letters to the voters. No ballots had to be reissued.

In a statement released on Monday, state board Executive Director Karen Brinson Bell said, “Our main focus continues to be ensuring all eligible voters can successfully and safely cast ballots in this important election.”

Also on Monday, the state board directed county election officials accept absentee ballots received in the mail through 5 p.m. on Nov. 12, provided they are postmarked on or before Election Day, Nov. 3. But this change is subject to approval by the 4th U.S. Circuit Court of Appeals.