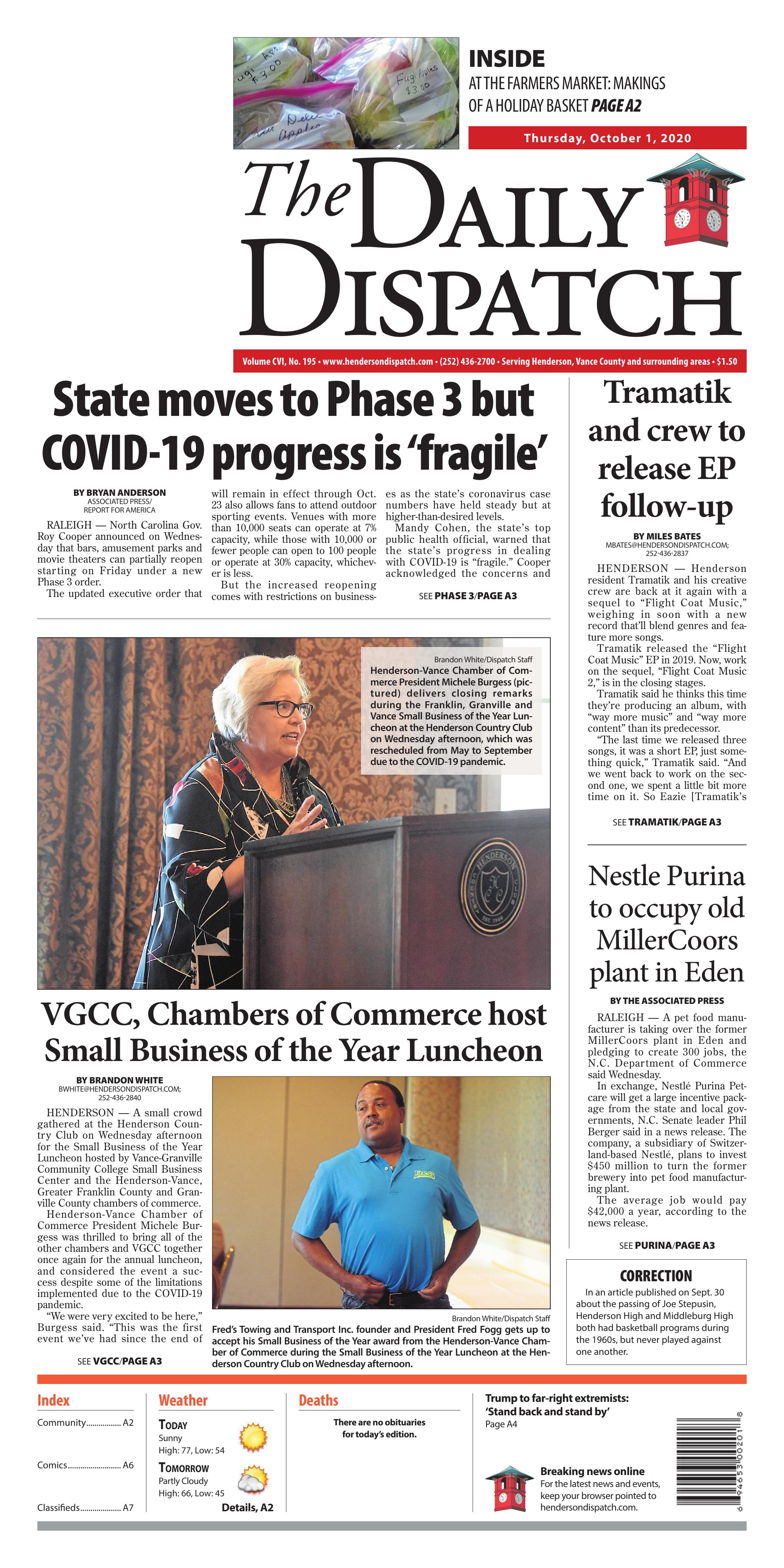 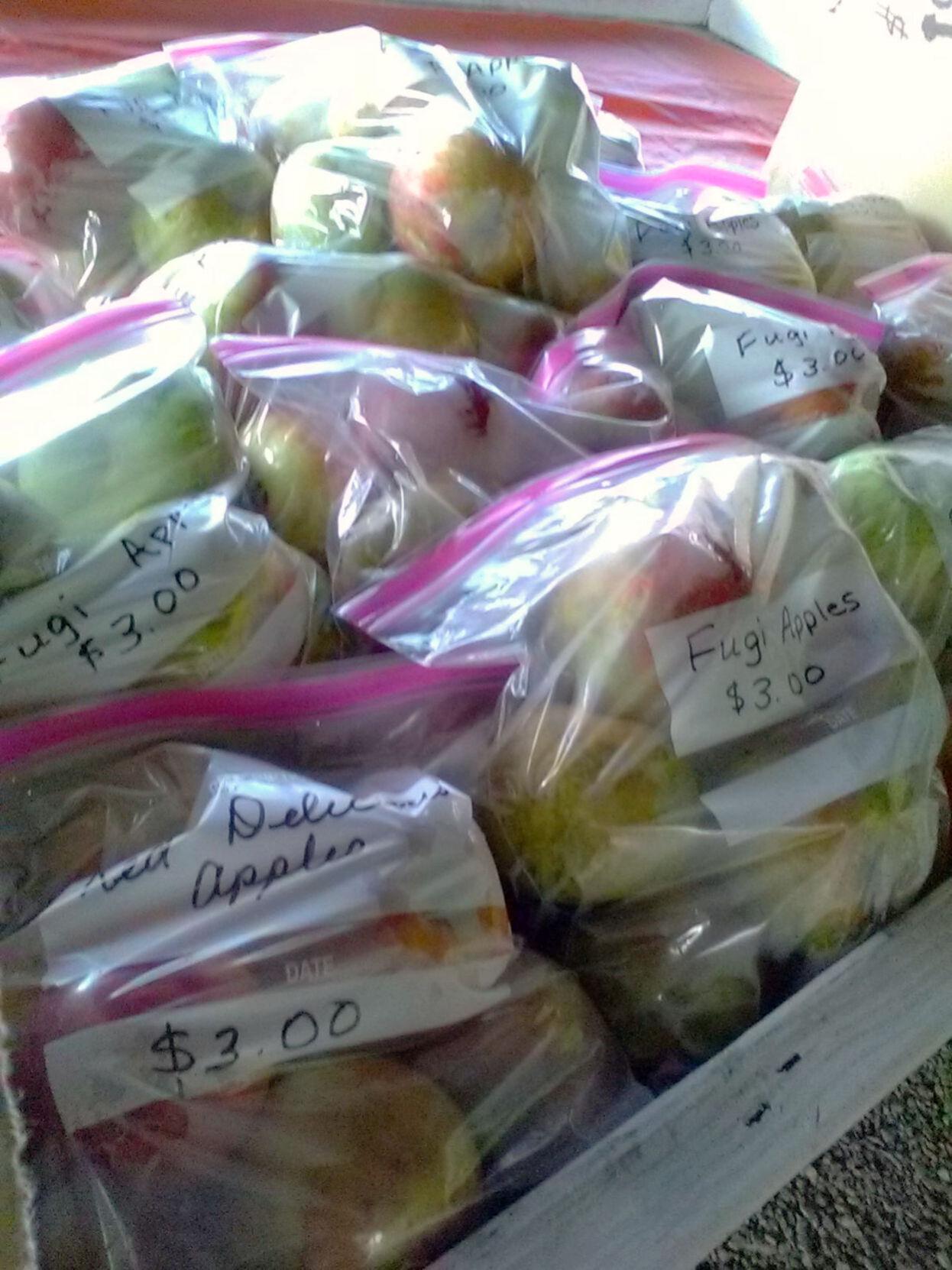 Come see Robert and Nancy to get your apples this week at the Oxford Farmers Market.

Henderson-Vance Chamber of Commerce President Michele Burgess, pictured, delivers closing remarks during the Franklin, Granville and Vance Small Business of the Year Luncheon at the Henderson Country Club on Wednesday afternoon, which was rescheduled from May to September due to the COVID-19 pandemic.

Henderson-Vance Chamber of Commerce President Michele Burgess was thrilled to bring all of the other chambers and VGCC together once again for the annual luncheon, and considered the event a success despite some of the limitations implemented due to the COVID-19 pandemic.

“We were very excited to be here,” Burgess said. “This was the first event we’ve had since the end of February. We followed all COVID-19 protocols and restrictions, which means we were limited on the number of people we could invite. Normally the room is very full for this event.”

The Small Business of the Year Luncheon was originally slated to take place in May to coincide with National Small Business Week, but a steady number of COVID-19 cases during the early days of the pandemic forced the chambers to postpone the event until September.

Burgess had been looking forward to the rescheduled Small Business of the Year Luncheon since its initial postponement, as she wanted to make sure that small businesses in Vance, Granville and Franklin County were properly recognized for their contributions to the region’s economy.

Following a brief lunch and opening remarks from VGCC Small Business Center director Sheri Jones, Integram Group CEO Stacy Woodhouse was brought up to the podium to discuss his life and current business endeavors since moving to Warren County eight years ago.

Previously serving as the Warren County Economic Development Commission director up until this month, Woodhouse understands the value that small businesses can bring to any community, and he believes that they will keep seeing positive developments with the Triangle area drawing more corporate interest.

“Warren County continues to grow,” Woodhouse said. “It’s a well-kept secret, but now it’s becoming less so when you look at the tourism numbers we have from 2019. There was tremendous growth, and I think you’re going to see Warren County continue on that path as Raleigh grows into the more northern counties.”

Once Woodhouse concluded his presentation, each chamber announced their choice for Small Business of the Year for 2019, which only goes to businesses that are members and supporters of their respective chamber and community while also showing significant economic growth.

Since 1989, Fred’s has specialized in light-duty and heavy-duty towing, along with equipment hauling and mobile roadside repair, but office manager Karrie Fogg believes that the best days for the company have yet to come.

“It feels really nice to be appreciated by the people you support in the community,” Fogg said. “We recently bought another property in Bracey, Virginia and opened a new location in Ashland, Virginia. We’re going to keep providing the same service that we’ve based our business on in Vance County, but we also want to do that in other areas.”

Even with the winners and other small businesses making strides during 2019 and the opening months of 2020, Burgess knows that some of them will experience economic impacts from the pandemic, and is encouraging residents from Vance, Granville, Franklin and Warren County to keep helping them as North Carolina finishes its reopening process.

“Support local, shop local, eat local,” Burgess said. “Before you make an online order or drive out of town to purchase something, give our local people a chance first. If you can’t find what you’re looking for here, then go do that. These small businesses support fundraisers, sponsor youth baseball teams and they give back, so we want people to support them and keep them in business.”

HENDERSON — Henderson resident Tramatik and his creative crew are back at it again with a sequel to “Flight Coat Music,” weighing in soon with a new record that’ll blend genres and feature more songs.

Tramatik said he thinks this time they’re producing an album, with “way more music” and “way more content” than its predecessor.

“The last time we released three songs, it was a short EP, just something quick,” Tramatik said. “And we went back to work on the second one, we spent a little bit more time on it. So Eazie [Tramatik’s cousin] definitely spent way more time on his production.”

Tramatik referred to the new record as being like the first project times 10.

They’ve been putting “a lot of work” toward it and actually have a couple videos they’re going to shoot for it in “the next coming weeks,” he said., adding that the work has “been going pretty good.”

Along with So Eazie, Tramatik is working on the project with his brother and fellow Henderson resident, Murda Gwapacino. That’s the same collaboration that was responsible for “Flight Coat Music, as Gwapacino and So Eazie co-wrote and produced the EP, with So Eazie making the beats and Gwapacino handling the recording, mixing and mastering.

Tramatik raps and connects them with all the shows, open mics and “stuff like that,” he said.

The three are individuals who harbor their own careers and ambitions that they work on separately. “So it’s more so like a collaboration, or compilation of all of our talent,” Tramatik said.

But the new record will include other featured artists from the area too, he said.

One is Toni T., who Tramatik referred to as a “great gospel singer in the area.”

“She does a lot of church,” Tramatik said. “We got her on a very, very, I want to say like spiritual song, it’s going to be the outro on the album. But it’s very spiritual, very melodic. She came through.”

Tramatik’s uncle, “sort of a musical legend in the area” who used to sing with a gospel quartet, is also on the album.

Tramatik said the album is going to be a blend of different genres.

“You can expect to hear a lot of samples from classical songs,” he said. “We got a lot of classical samples. We’ve got some upbeat, new age stuff too, especially like with the way the hip hop music is going. We’ve got a lot of … the melodic rap, the AutoTune kind of flow. And again, with the whole mix and master, the quality of the sound this time around is a lot better.”

You may be able to hear it soon.

Tramatik said they’re wanting to release the album on the same day they released the EP last year.

“I think this was Nov. 19,” he said. “We’re doing the most promo we can do right now. We’ve got interviews set up, a lot of open mics we’re going to, performing songs. COVID[-19] kind of slowed us down a lot because we couldn’t get out and perform and do shows. And a lot of my favorite venues in the Raleigh [and] Durham area are closing for good.”