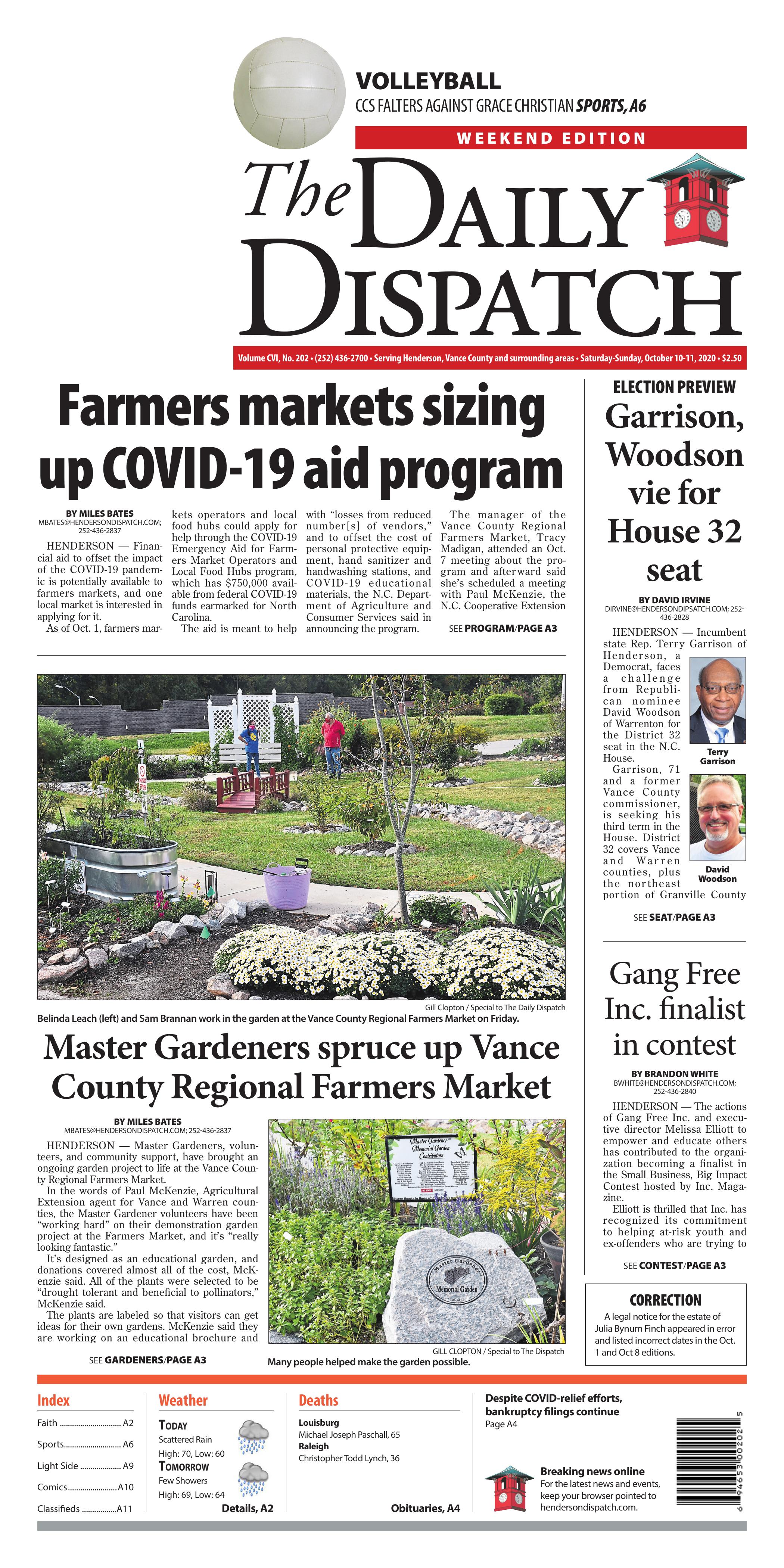 HENDERSON — Financial aid to offset the impact of the COVID-19 pandemic is potentially available to farmers markets, and one local market is interested in applying for it.

As of Oct. 1, farmers markets operators and local food hubs could apply for help through the COVID-19 Emergency Aid for Farmers Market Operators and Local Food Hubs program, which has $750,000 available from federal COVID-19 funds earmarked for North Carolina.

The aid is meant to help with “losses from reduced number[s] of vendors,” and to offset the cost of personal protective equipment, hand sanitizer and handwashing stations, and COVID-19 educational materials, the N.C. Department of Agriculture and Consumer Services said in announcing the program.

The manager of the Vance County Regional Farmers Market, Tracy Madigan, attended an Oct. 7 meeting about the program and afterward said she’s scheduled a meeting with Paul McKenzie, the N.C. Cooperative Extension agent for Vance and Warren counties, and Turner Pride, director of Cooperative Extension’s Vance County Center, to discuss proceeding with the grant application.

A neighboring market in Granville County, the Oxford Farmers Market, was open this year and all of its vendors came, said Janis Daniel, its director. “So we really have no issues other than the social distancing and the hand sanitizers,” she said.

As for over in Warren County, when asked if the Warren County Farmers Market is going to apply Danylu Hundley, its chairperson, said in an Oct. 5 email that they may if they qualify.

“There are two webinars this week, and the executive board members plan to watch one or both” to find out more about the program, Hundley said.

But none of the market operators have long to decide.

The deadline to apply for the aid is Oct. 22, “which is a fairly short application period,” Agriculture Commissioner Steve Troxler said. “It is imperative that operators submit their applications quickly, so we can distribute the funds quickly to meet the federal rules.”

He added that the pandemic has underscored “the important role farmers markets and food hubs provide in communities.”

Belinda Leach (left) and Sam Brannan work in the garden at the Vance County Regional Farmers Market on Friday.

GILL CLOPTON / Special to The Dispatch

In the words of Paul McKenzie, Agricultural Extension agent for Vance and Warren counties, the Master Gardener volunteers have been “working hard” on their demonstration garden project at the Farmers Market, and it’s “really looking fantastic.”

It’s designed as an educational garden, and donations covered almost all of the cost, McKenzie said. All of the plants were selected to be “drought tolerant and beneficial to pollinators,” McKenzie said.

The plants are labeled so that visitors can get ideas for their own gardens. McKenzie said they are working on an educational brochure and other improvements.

A small group of volunteers was working in the garden Friday.

Master Gardeners is a statewide program that is run by the North Carolina extension service, Master Gardener volunteer Joy Smith said. Volunteers have to have training.

The garden project at the market started out as“a big excavation project,” Smith said. “The people that were there then tell me that it was just a mudhole and that nobody could imagine what it had turned into now.”

Beverly Allen was the one “with the original vision of it” and was “the driving force in its forming years,” said Edna Gaston, who has been a member of this group and has been a Master Gardener for more than 25 years.

People have built them things such as a “nice bridge” and some benches.

“... some people enjoy coming out there and sitting to eat their lunch or taking pictures of their kids at graduation because it has lots of really nice blooming flowers,” Smith said. “And it’s right there beside the Farmers Market so I think … that’s why it’s noticed. People come to the Farmers Market and they see our garden and seem to enjoy our garden.”

Gaston said it’s been “challenging,” “exciting,” and “amazing” working on the garden project. “Seeing a vision and this barren ground there at the Farmers Market and thinking, ‘Oh my golly, what have we gotten ourselves into?’ and then seeing community support, the volunteers, the Master Gardeners, a lot of our spouses became interested and it has been so gratifying to see so many people embrace this idea and go to work,” Gaston said. “Some could actually do physical labor. Some were wonderful in providing supplies. Some were wonderful with moral support and encouragement which is always very needed. It has really been so heartwarming.”

There have been what Gaston referred to as “so, so many volunteers.”

“Some have done a little bit, but every bit of it has been so, so important,” Gaston said. “And, again, the fact it, local citizens, businesses, the government, the community, has joined into our efforts and turned it into definitely a team, a community project, is just absolutely fabulous.”

HENDERSON — Incumbent state Rep. Terry Garrison of Henderson, a Democrat, faces a challenge from Republican nominee David Woodson of Warrenton for the District 32 seat in the N.C. House.

Garrison, 71 and a former Vance County commissioner, is seeking his third term in the House. District 32 covers Vance and Warren counties, plus the northeast portion of Granville County including Oxford.

He first won the seat in 2016, running unopposed. In 2018, he defeated Republican challenger Robert Shingler, taking a bit over 64% of the vote and comfortably running first in all three counties.

Woodson, 60, is a retired federal government employee who managed printing for among other organizations the White House.

He criticizes Garrison for failing to support a 2019 state budget proposal that among other things would’ve forced the N.C. Department of Health of Human Services to move its headquarters to Granville County.

A site between Oxford and Henderson was among those on the table, and Woodson said Garrison’s decision to sustain Gov. Roy Cooper’s veto of the budget bill that included the proposal led to District 32 “losing out on $254 million and 1,800 jobs for” the facility.

Cooper vetoed the 2019 budget bill for reasons that most prominently included the Republican-majority N.C. General Assembly’s refusal to use it to expand Medicaid eligibility.

“The need for jobs paying livable wages, strengthening public schools, and Medicaid expansion are the three most important issues affecting District 32 and the state of North Carolina in my view,” Garrison said. “These needs greatly impact the economy, help reduce poverty and help keep all people healthy, especially during this pandemic.”

The proposal to move DHHS subsequently stalled out, and it’s received vocal opposition from department Secretary Mandy Cohen. The Cooper administration’s point person on dealing with the COVID-19 crisis, Cohen has said moving the department out of the capital would harm its ability to collaborate with other state agencies.

Garrison and Woodson both claim they can work effectively on the district’s behalf.

Woodson said his career in the federal government shows he can manage “cohesive, productive and diverse teams of people to accomplish goals. He also said he’s also “able to reach across the aisle to solve complex issues and find solutions.”

Garrison said he would continue working with the governor, legislative colleagues and local leaders, across the spectrum of public, private and nonprofit organizations. “ Good work relations are key to overcoming partisanship and rural-urban divide which impede progress,” he said.

HENDERSON — The actions of Gang Free Inc. and executive director Melissa Elliott to empower and educate others has contributed to the organization becoming a finalist in the Small Business, Big Impact Contest hosted by Inc. Magazine.

Elliott is thrilled that Inc. has recognized its commitment to helping at-risk youth and ex-offenders who are trying to transition back into society.

“It’s an honor to know that all of our efforts here are being noticed,” Elliott said. “We do a lot for the community with very little, so the title of a small business with a big impact really fits us.”

Before the arrival of the COVID-19 pandemic in the United States, Elliott and her staff helped people with an after-school program that specialized in literacy and STEM education, along with monthly food distributions and overseeing two homeless shelters.

Once COVID-19 cases began to surge in North Carolina, Elliott knew that she could not stand by with so many people in Vance County being in danger of catching the virus and quickly went to work to ensure that many local residents had easy access to COVID-19 testing.

N.C. Central University “needed a community facilitator for COVID-19 and they wanted some boots on the ground,” Elliott said. “The health department actually recommended me, and N.C. Central reached out, so I’ve been going around giving out COVID-19 information cards and helping people get tested. We actually had some testing here on Monday.”

Elliott said she wants Vance County residents to take the pandemic seriously so that they or loved ones do not have to deal with the long-term consequences of COVID-19.

Gang Free Inc. has helped test more than 150 people in Vance County as of Friday afternoon, and Elliott said she has no intention of slowing those efforts down anytime soon because she believes COVID-19 case counts will continue to rise in the state as restrictions are lifted during the winter months.

With Gang Free Inc. being one of four finalists in the Small Business, Big Impact Contest, it’s eligible to receive a grand prize of $10,000 and a Mercedes-Benz Sprinter cargo van with an average retail value of up to $40,000. Each runner-up will receive a $5,000 check.

Elliott said that winning the new van would help Gang Free transport people around Vance County to help them obtain a driver’s license or to receive mental health care, but she also wants to use it to deliver more supplies to shelters and senior complexes.

“As we progress through the pandemic, I would like to continue focusing on the education of our students,” Elliott said. “A lot of students are falling behind because of the current climate we are in with them not being at school. I also want to get the second shelter up and running and focus on more COVID-19 tests, but if I win this van, then I can use that to help get more people to the polls.”

Voting for the Small Business, Big Impact Contest runs through Oct. 23 and can be accessed at https://www.inc.com/mbvans/contest.html.