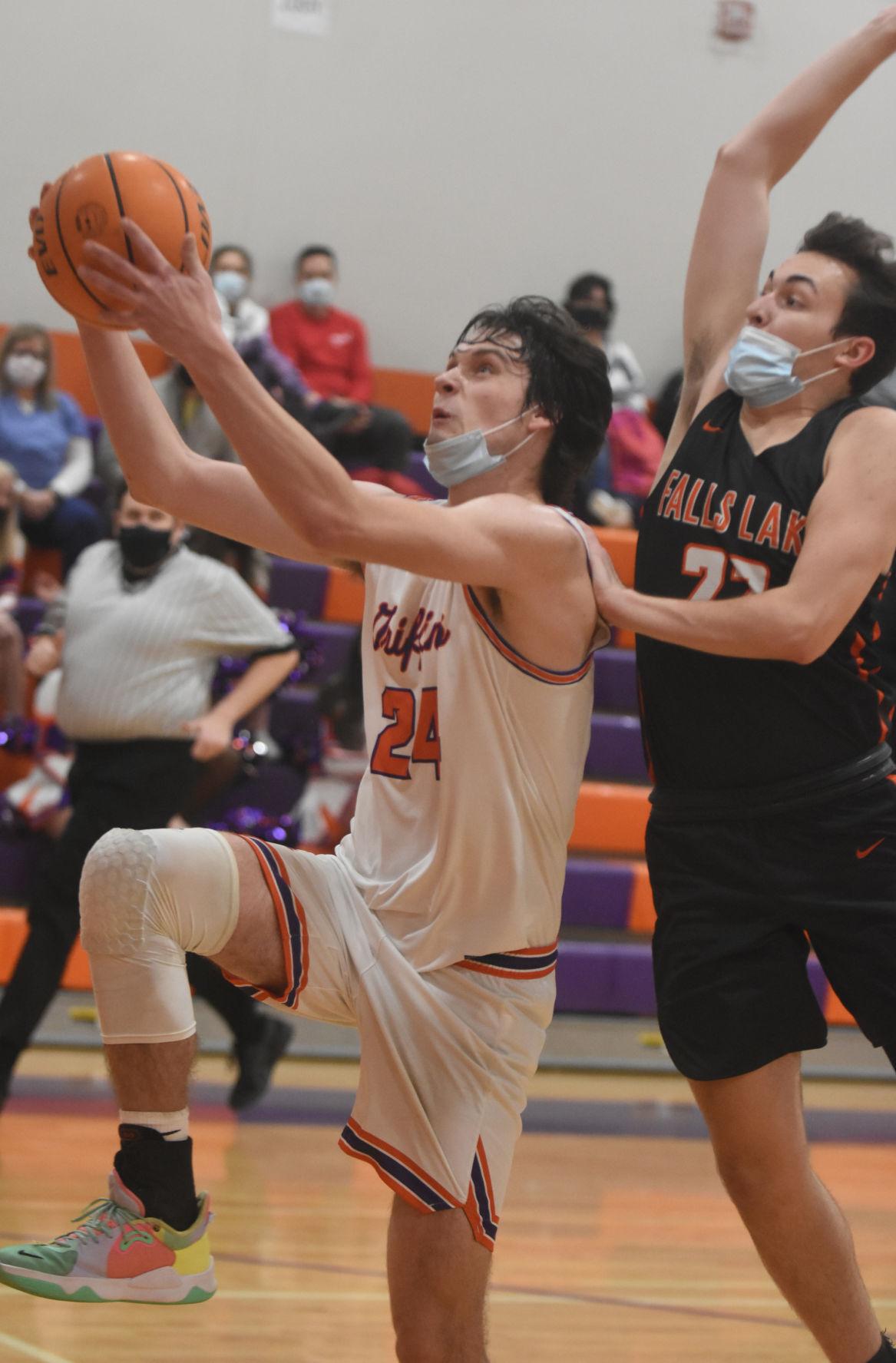 Oxford Prep men’s basketball player Lucas Juntunen (24) driver to the rim with a Falls Lake defender in hot pursuit during his team’s 59-41 victory on Tuesday evening. Juntunen ended the evening with a season-high 30 points.

Amarion Lewis was due on Jan. 6. But his internal calendar must have told him to “hurry up.”

That’s what he did, and as a result he was the first baby born at Maria Parham Health in 2022.

He arrived on Jan. 1 at 8:26 a.m., weighing in at 5 pounds, 9 ounces, “a little fellow,” said Donna Young, coordinator of marketing and communications at Maria Parham.

Amarion’s mother is Tyesha Lewis. She said he was not premature, just “a little early.”

He joins a 4-year-old brother and 1-year-old sister in the Lewis household.

Lewis said she is getting help from her mother and father, and from her grandparents.

The older brother and sister play with Amarion. All he does is eat and sleep, according to his mother.

But Amarion wasn’t the only holiday baby. Exactly one week before — on Christmas Day — Deajah and Anthony McMillan were gifted with a new child.

Deajah McMillan told The Dispatch she went into labor as she was driving to her mother’s house in Durham for Christmas dinner. When she got there, her mother immediately drove her back up I-85 to Maria Parham Health. They got there at 2:30 p.m. and baby girl Ameerah arrived three hours later, weighing 7 pounds, 6 ounces.

“If I’d stayed for dinner, I wouldn’t have made it,” McMillan said.

“She was the only baby born at Maria Parham on Christmas Day,” McMillan added.

“They put her in a Christmas stocking.”

She and Anthony have one other child, a son who will be 2 in February.

The seasonal activity was not unusual for Maria Parham Health. The hospital is staffed with board-certified physicians, certified nurse midwives and women’s health nurse practitioners to assist a woman through pregnancy and the birth of her child. They deliver more than 500 babies each year.

But only one can claim the distinction of being the first baby of the year.

And being the only baby born on Christmas Day is pretty special, too.

The crossing of the CSX train tracks at Andrews Avenue will be temporarily closed for maintenance work from 6:30 a.m. on Friday, Jan. 14, to noon on Saturday, Jan. 15, city officials say. The project is one of four like it the railroad plans in and near Henderson this month.

HENDERSON — There will be four temporary road closures in Henderson later this month as CSX works on some of its railroad crossings.

The first group includes what is the highest-profile of the crossings by far, the one that carries Andrews Avenue across the tracks at the north end of downtown.

Andrews Avenue will be closed between North Garnett Street and Rowland Street from 6:30 a.m. on Friday, Jan. 14, to noon on Saturday, Jan. 15, city officials say.

Workers on those same days and times also will close St. Matthews Street between Miriam Street and Nicholas Street.

That crossing is one of three CSX plans to work on in the Raleigh Road corridor.

City officials have been told only that the crossings will be “closed for repair,” and that traffic will have to be rerouted during the closures. “Signage will be in place marking detour routes,” City Clerk Esther McCrackin said.

She directed further inquiries to CSX, whose media-relations offices hadn’t answered them as of press time on Wednesday.

Crossing maintenance can take many forms, be it upkeep of the signals, bells and gates to work on the tracks and the roadbed they cross over.

CSX as of 2020 was serving 23 states and had single-track lines like the one in Henderson that covered 19,605 miles. Its net earnings on the year were $2.7 billion, according to its 2020 annual report.

But the company does have its challenges. Average train speeds on its lines have been dropping of late, and as of the third quarter of 2021 were down to 17.7 mph, 10% less than the 19.6 mph from the year before, according to its most recent quarterly report to investors.

Train accident rates are up, with 3.09 occurring in the third quarter of 2021 for every million miles of running. That was improved on the third-quarter rate of 2020, but the full-year rate in 2019 was 2.35 accidents per million miles.

Continued spending on the upkeep of “track, bridges, signals, equipment and [hazard] detection technology” helps safety, the company said in its 2020 annual report, which also noted that it spent $1.4 billion on infrastructure that year and $1.6 million on capital projects overall.

Police have arrested two men in connection with a theft from a cash machine at the Dabney Exchange Car Wash, 200 Exchange St., Henderson.

Police are seeking information about these men in connection with a theft from a cash machine at the Dabney Exchange Car Wash, 200 Exchange St., Henderson.

Police are seeking information about this man in connection with a theft from a cash machine at the Dabney Exchange Car Wash, 200 Exchange St., Henderson.

HENDERSON — City police say they need some help identifying and finding the person or persons who bamboozled a car washing’s cash machine into giving them money.

Authorities later received a report “of a subject using a device to manipulate” the machine and get money from it.

Police released a surveillance photo that shows one man, dressed in gray sweats, standing at the driver’s side of a red four-door sedan, holding a light-colored box of some sort, about the size of a pack of cigarettes, at hip level in front of the cash machine.

A second photo, shot from a different angle, shows him reaching into the machine as another man stands at the car’s passenger-side front door.

A third shows a man dressed in a dark tracksuit standing at the machine as one would when extracting money from it.

If anyone has any information about this incident, police are urging them to contact Henderson-Vance Crime Stoppers at 252- 492-1925 or the P3 app, call the Henderson Police Department directly at 252-438-4141, or contact the department through Facebook or Instagram.

News
What ’22 holds for the future of local rail
NCDOT

Last month, Henderson was among a group of seven cities targeted for a series of community pop-up meetings involving NCDOT as well as transportation and engineering consulting firms regarding the proposed S-Line rail corridor.

HENDERSON — This year should prove to be an important one in determining the fate of the proposed S-Line rail corridor, which would link Raleigh to Richmond, Virginia and bring passenger rail service through Henderson again.

Henderson and Norlina were among a group of seven cities including the state capital that were targeted toward the end of 2021 for a series of community pop-up meetings, involving the N.C. Department of Transportation as well as transportation and engineering consulting firms, about the proposed S-Line rail corridor.

Next will come a transit-oriented development study of Henderson to gauge the economic impact of the S-Line, which would also expand freight service.

“There is no definitive timeline as when this project could happen,” said Henderson City Manager Terrell Blackmon. “However, the transit-oriented development study should be completed by the end of 2022. We expect to know more about specific project funding for the S-line later in 2022, as well.”

Spruill said the new legislation “includes $12 billion for state-led national intercity rail development outside of the Northeast with an additional $8.75 billion subject to annual appropriations.”

DOT touted S-Line project progress in a video last month on its website recapping the year in rail for North Carolina.

“Efforts to establish high-performance rail service between Raleigh and Richmond on the S-Line are ongoing,” the DOT video proclaimed. “The department is working with Virginia and communities along the line in planning and engineering future rail services and development opportunities.”

A summary of the community pop-up meetings was made available on Dec. 15, 2021. The meeting in Henderson was held downtown on Dec. 4 during the Christmas parade, part of the DOT Integrated Mobility Division’s planning initiative for Henderson and Norlina, along with Raleigh, Sanford, Apex, Wake Forest and Franklinton.

One of the key takeaways for planning agents seeking information about the future of rail service in Henderson, according to DOT’s summary, was that residents here want to “preserve nearby residential communities and keep them affordable.”

For Norlina, the snapshot was “a rail station and new development would help revitalize the area and get back to the historical roots of the community.”

The S-Line is considered by DOT to be a “key missing link within the larger vision for passenger rail service in the Southeast Corridor.”

Recreating a vibrant downtown Henderson, while creating more jobs as well as shopping, dining and entertainment options, is also considered to be a community priority as it relates to the S-Line project.

Blackmon believes the S-Line would provide Henderson an improved transportation option in addition to employment and economic development opportunities.

“The S-Line will provide a combination of freight and passenger rail,” Blackmon said. “However, the possibility of commuter rail service to Henderson could make our city a destination stop for things like shows at McGregor Hall and other cultural events that occur throughout the year, such as the car show.”

Henderson-Vance County Chamber of Commerce President Michele Burgess was on hand for the Dec. 4 event held downtown and said she is excited about the possibilities of future business growth and the awareness of the community the S-Line could bring. She noted that the Chamber Governmental and Public Affairs Division identified the project as a top priority several years ago.

“I have been following this effort with great interest,” Burgess said, “and agree with my chamber colleagues at the Sanford and Wake Forest chambers of commerce, who are also located on this corridor, that this railway needs to be preserved to maintain our existing rail service and to also bring back passenger rail service.

“I want our Chamber to be a key player with an active presence at upcoming city and county planning meetings to advance this project.”