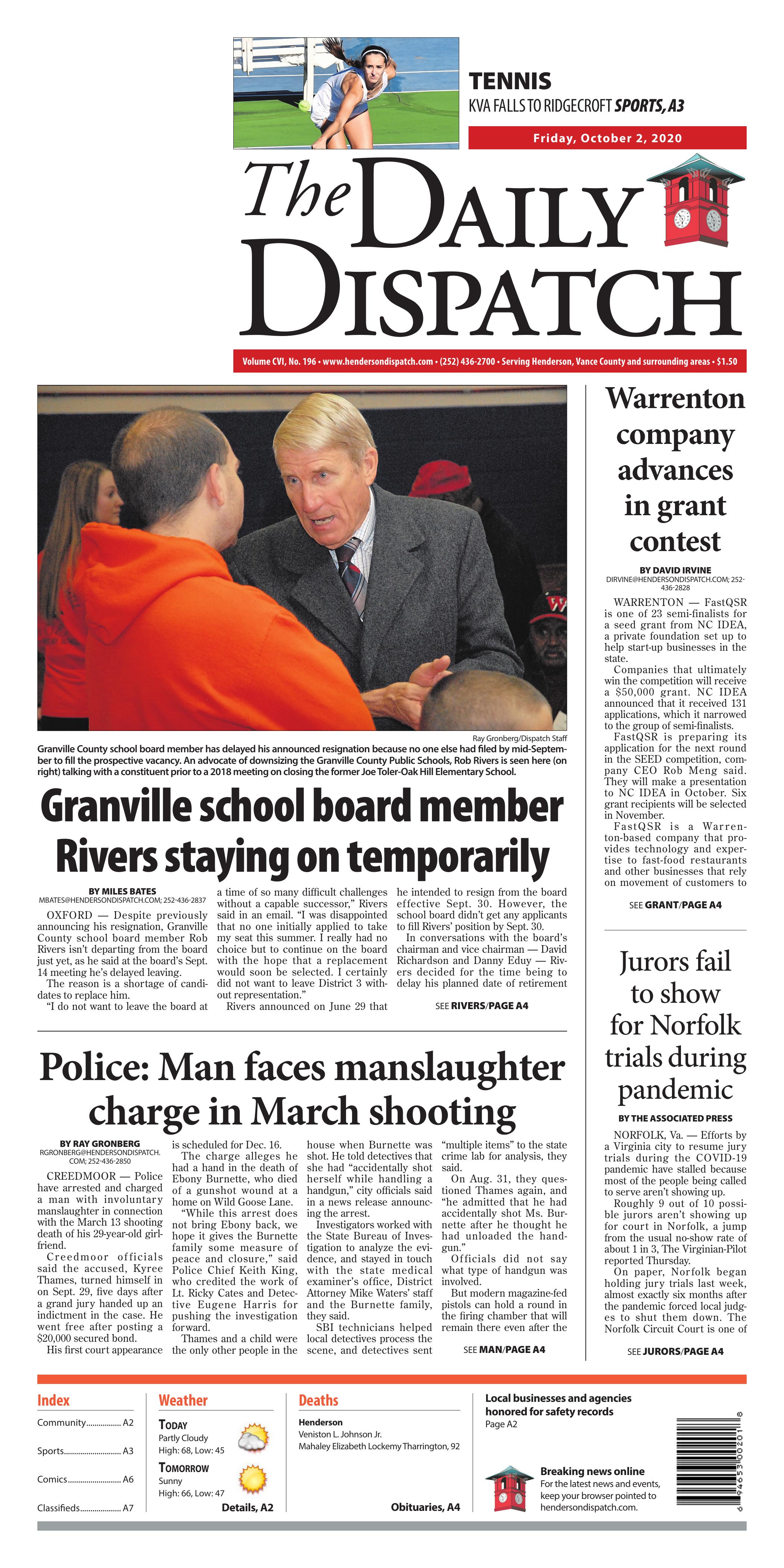 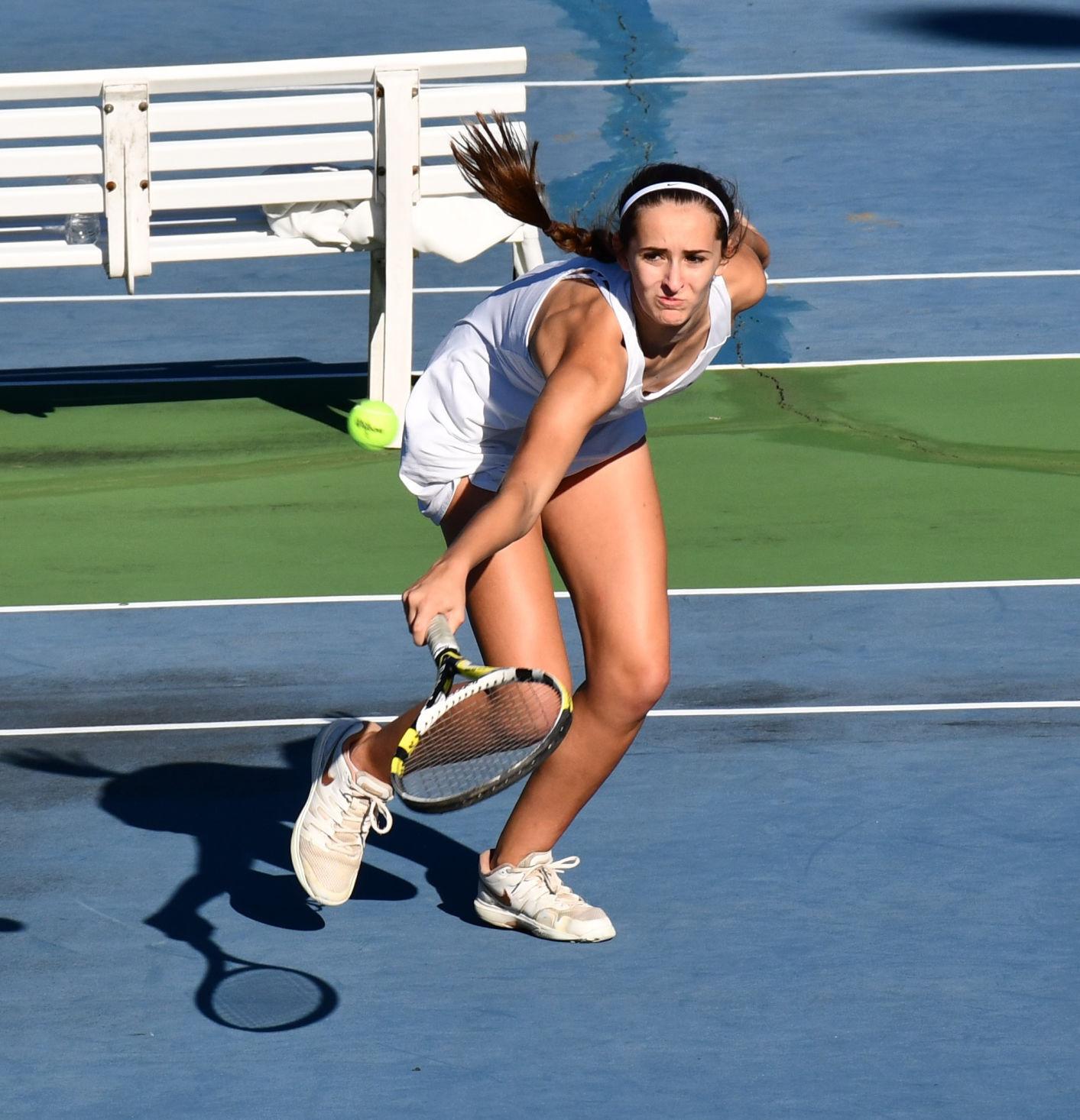 Kerr-Vance Academy tennis player Leah Moseley returns a serve during a match against Ridgecroft on Wednesday. KVA ended up falling by a score of 7-2.

Granville County school board member Rob Rivers has delayed his announced resignation because no one else had filed by mid-September to fill the prospective vacancy. An advocate of downsizing the Granville County Public Schools, Rivers is seen here, right, talking with a constituent prior to a 2018 meeting on closing the former Joe Toler-Oak Hill Elementary School.

OXFORD — Despite previously announcing his resignation, Granville County school board member Rob Rivers isn’t departing from the board just yet, as he said at the board’s Sept. 14 meeting he’s delayed leaving.

The reason is a shortage of candidates to replace him.

“I do not want to leave the board at a time of so many difficult challenges without a capable successor,” Rivers said in an email. “I was disappointed that no one initially applied to take my seat this summer. I really had no choice but to continue on the board with the hope that a replacement would soon be selected. I certainly did not want to leave District 3 without representation.”

Rivers announced on June 29 that he intended to resign from the board effective Sept. 30. However, the school board didn’t get any applicants to fill Rivers’ position by Sept. 30.

In conversations with the board’s chairman and vice chairman — David Richardson and Danny Eduy — Rivers decided for the time being to delay his planned date of retirement on a monthly basis to either Dec. 31 or whenever the board selects a replacement, whichever occurs first.

“As soon as we select a replacement, then the chair and I will figure out the best day for me to go ahead and make my final day effec[tive],” Rivers said during the board’s Sept. 14 meeting. “I do want to let you all know that so you will be seeing me after Sept. 30 and hopefully that will be a good motivation for other people to volunteer and step up.”

By law, Rivers has to vacate the season before the board can vote to fill it, Richardson said in an email. The application period was extended to Sept. 30 by Richardson’s request and communicated to board members at their September meeting.

During its October meeting, the board will review whatever applications have arrived and potentially issue interview requests with candidates, Richardson said in the email.

“So if we were to have a potential candidate at the end of October, Mr. Rivers would have to vacate the seat prior to the meeting to vote for his replacement,” Richardson added.

Rivers said it’s important for the board to have a full slate of members because it faces “some very difficult decisions” in the coming weeks and months.

“We are dealing with trying to reopen safely, and that alone is one of the most challenging tasks this board has ever faced,” he said. “Additionally, there are serious financial considerations to be addressed. As our total number of students has decreased over the past eight years, we have lost about $18 million in annual state and local revenues, but our fixed costs have not decreased at that level.”

While spending on teachers and teaching assistants varies with the number of students enrolled, there are costs for other things that stay more or less the same regardless of how many students the Granville County Public Schools serves.

Rivers contends the system can lower fixed costs only by “closing facilities — school buildings, in most cases,” or by reducing staff, salaries and programs.

“The biggest savings will come from closing schools, but that is an extremely difficult and complex process with many ramifications,” he said. ‘This is not the time for a board vacancy. Hopefully, a very capable candidate will step forward to represent District 3 shortly.”

CREEDMOOR — Police have arrested and charged a man with involuntary manslaughter in connection with the March 13 shooting death of his 29-year-old girlfriend.

Creedmoor officials said the accused, Kyree Thames, turned himself in on Sept. 29, five days after a grand jury handed up an indictment in the case. He went free after posting a $20,000 secured bond.

His first court appearance is scheduled for Dec. 16.

The charge alleges he had a hand in the death of Ebony Burnette, who died of a gunshot wound at a home on Wild Goose Lane.

“While this arrest does not bring Ebony back, we hope it gives the Burnette family some measure of peace and closure,” said Police Chief Keith King, who credited the work of Lt. Ricky Cates and Detective Eugene Harris for pushing the investigation forward.

Thames and a child were the only other people in the house when Burnette was shot. He told detectives that she had “accidentally shot herself while handling a handgun,” city officials said in a news release announcing the arrest.

Investigators worked with the State Bureau of Investigation to analyze the evidence, and stayed in touch with the state medical examiner’s office, District Attorney Mike Waters’ staff and the Burnette family, they said.

On Aug. 31, they questioned Thames again, and “he admitted that he had accidentally shot Ms. Burnette after he thought he had unloaded the handgun.”

Officials did not say what type of handgun was involved.

But modern magazine-fed pistols can hold a round in the firing chamber that will remain there even after the magazine is removed, until and unless the bearer racks the slide a second time to eject the cartridge. Regardless, standard safety practice is to always assume a gun is loaded.

WARRENTON — FastQSR is one of 23 semi-finalists for a seed grant from NC IDEA, a private foundation set up to help start-up businesses in the state.

Companies that ultimately win the competition will receive a $50,000 grant. NC IDEA announced that it received 131 applications, which it narrowed to the group of semi-finalists.

FastQSR is preparing its application for the next round in the SEED competition, company CEO Rob Meng said. They will make a presentation to NC IDEA in October. Six grant recipients will be selected in November.

FastQSR is a Warrenton-based company that provides technology and expertise to fast-food restaurants and other businesses that rely on movement of customers to maintain profitability. FastQSR helps its clients keep track of the movement of cars at the drive-thru window, and lines of customers dining inside.

Several technologies assist the process. An “AutoMotion Data Collection Unit” measures the movement of cars in the drive-thru lane and determines whether they are moving at an optimum rate.

A “LineMotion Data Collection Unit” measures customers in line before the cashier and helps the business identify bottlenecks and create solutions to undo the snags.

The “GuestMotion Data Collection Unit” uses a wi-fi device to determine the exact location, path and wait time of customers at a business site.

The company uses its data-analysis techniques to give clients a picture of how well each aspect of their service is functioning. The analysis is supposed to help helps businesses identify bottlenecks and streamline systems to eliminate costly delays.

FastQSR is based in Frontier Warren, a collaborative that provides space and connections for aspiring entrepreneurs. Located at 136 S. Main St. in Warrenton, Frontier Warren provides office space for 10 companies, plus shared meeting rooms and coworking space.

Frontier Warren is a collaboration between the Research Triangle Foundation, the town of Warrenton and Warren County.

Meng said that if FastQSR receives a grant, it will use the funds for marketing, in-person events and a pilot program involving several other companies.

The marketing initiative would involve collaboration with other companies including Tabletop Media Group, a marketing agency that specializes in the food, beverage, agriculture and lifestyle industries.

One projected in-person event will be a Restaurant Leadership Conference held in collaboration with Winsite Media Group, which focuses on convenience retailing, grocery businesses, restaurants and noncommercial foodservice.

The pilot program will involve several companies that Meng said he’s “not comfortable naming” at this time.

Since 2006, NC IDEA has awarded over $6.8 million in seed funding to 154 companies throughout the state. It says that collectively, the grant recipients have generated more than $295 million in funding and created over 1,860 jobs.