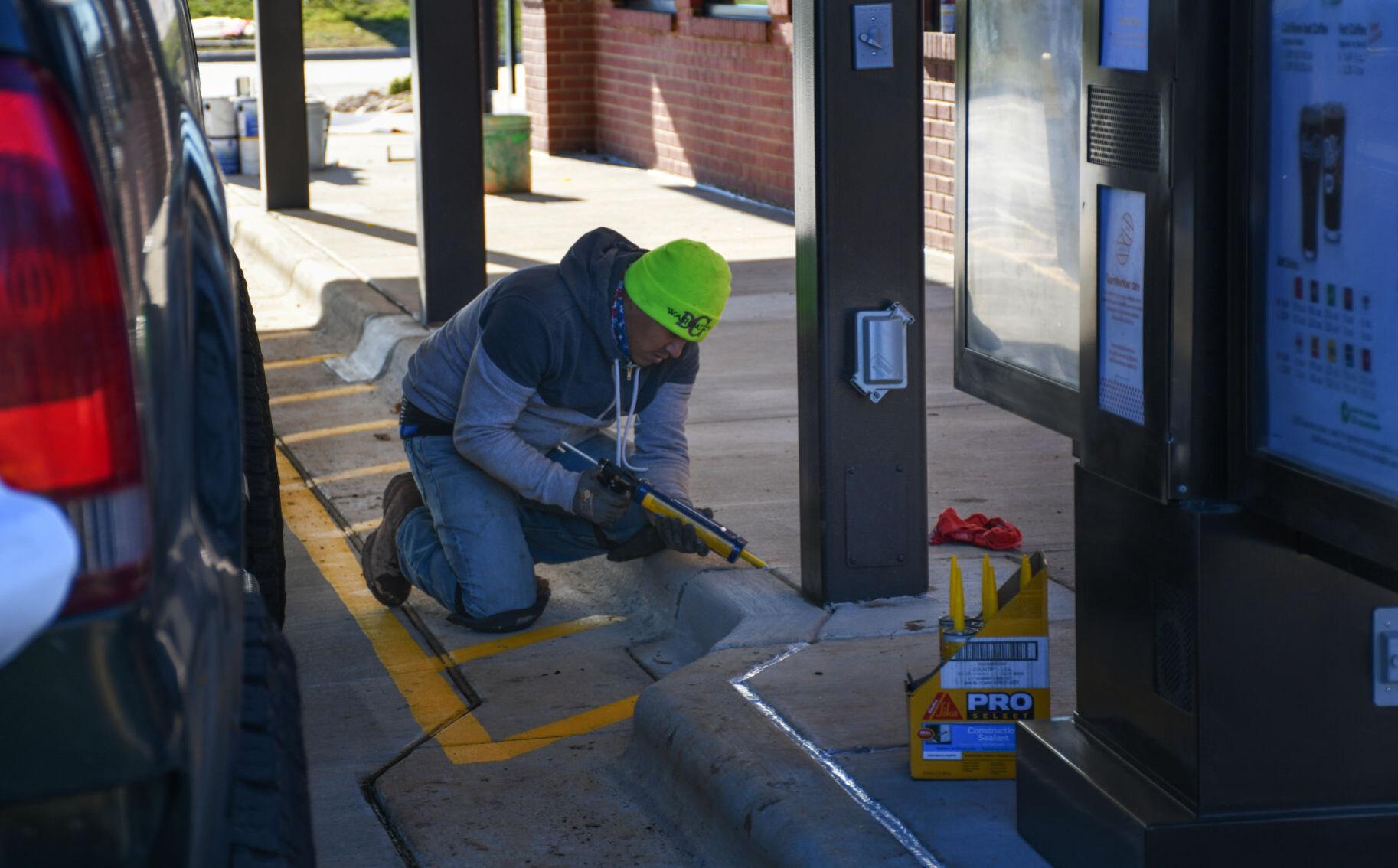 Construction workers were putting the finishing touches on the renovation of Henderson’s Chick-fil-A on Wednesday. The restaurant has been closed since fall, but its operators announced that they’ll open the drive-thru for lunch for the first time this year on Thursday.

Crossroads Christian basketball player Trent Willingham (34) goes in for a layup during his team’s 90-85 loss against Raleigh Christian Academy on Tuesday evening.

HENDERSON — A valiant effort by the Crossroads Christian men’s basketball team to pick up their first win of the 2020-21 season on Tuesday fell short, as Raleigh Christian Academy withstood a late charge to win 90-85.

Head coach Scottie Richardson said there have been some issues in developing cohesion on the floor, given how COVID-19 has impacted CCS during the year, but he believes his team’s performance on Tuesday showcased how talented it can be at full strength.

“This was a tough one, but I loved our fight,” Richardson said. “This is the first game I’ve been able to coach with the guys since November, so I was curious to see how we would play. [Raleigh Christian] is a very good team, so I think the fight we showed tonight is something we could play off of going forward.”

CCS and Raleigh Christian began the evening on even footing, with both teams playing solid offense and defense before the gained a slight edge as they each regrouped for the second quarter.

Several mistakes by the Crossroads offense, ranging from missed opportunities around the basket to traveling calls, allowed Raleigh Christian to open up their lead. But they went to the locker room up only 35-31 following a 7-0 run from CCS.

The struggles for the Colts on both sides of the ball initially carried over into the second half, as Raleigh Christian capitalized on more missed baskets and poor defensive possessions by CCS to pull ahead by as many as 15 points.

With junior Andres Prince on the bench with four fouls, senior Asher Fulk and junior Drew Rogers took responsibility in leading an intense scoring attack for CCS that would see them take the lead away from Raleigh Christian on the first play of the fourth quarter.

The Colts did everything possible to wrestle control of the game away from Raleigh Christian, but they found themselves shorthanded late with Prince, Fulk and junior Ryan Adcock all fouling out. That allowed Raleigh Christian to pull away and hold on for the victory.

Rogers led CCS in scoring with 20 points, while Fulk added 18 before exiting the contest. Prince and sophomore Sam Boyd were the other double-digit scorers for CCS, with 13 and 10 points respectively.

Richardson praised his players for the way they have handled themselves through what has been a difficult season, but he believes wins for CCS will start coming as soon as the program finds its rhythm through more practices and games.

“There are two things that I can’t teach, which are work ethic and playing hard,” Richardson said. “You just have to bring those things to the table, and I like where we are right now. We had to get deeper in the bench than we wanted to, but the guys on the second team played very well. We lost some of our composure in the first half, but everyone fought until the end.”

The next opportunity for CCS to pick up its first win of the 2020-21 season will come Thursday when they host Kerr-Vance Academy at 7 p.m.

During the Jan. 4 meeting of the Granville County Commissioners, the item of existing DSS’s temporary facility lease that the county has with the Central Children’s Home came up.

Approval was obtained to extend the lease agreement for a temporary DSS facility for three to six months. At the meeting, Vice Chair Tony W. Cozart moved that “the recommendation as requested authorizing the county manager to execute an amendment to the existing lease with the Central Children’s Home for the use of temporary space for an additional three to six months at the current lease rate of $5,000 per month be approved.” Commissioner Zelodis Jay seconded and it was approved.

The address to the leased facility is 1307 Raleigh Street in Oxford.

“As you know with the pandemic and our current COVID restrictions, we’re just not able to consolidate staff back into the Spring Street location because of space needs in order to maintain not only social distance for our staff but also to help provide the community the distancing that’s needed as they interact with our staff,” County Manager Mike Felts said during the meeting before the motion was made and ultimately approved.

On March 16 in response to the COVID-19 pandemic response measures, the social services director and county manager actually met to “discuss the need for temporary facility space in order to implement sufficient social distancing within the DSS office area,” it’s noted on the full agenda for the meeting.

“After an exhaustive search and review of available space, a facility on the campus of the Central Children’s Home was identified which met the criteria outlined by the Social Services Director,” the full agenda goes on to say. “The Executive Director and Board of the Central Children’s Home did not hesitate to partner with the county to meet our emergency need. We were able to secure a six-month lease with the option to extend the lease through Jan. 15, 2021.”

The existing lease was originally set to expire in October of 2020 and had one three-month extension, which the board authorized the county to extend.

“Assuming” the board permits the county to work with the county attorney to do an amendment to the lease, to extend it from three to six more months “forward”, it would be subject to county board approval and the Central Children’s Home board, he said during the meeting before action was taken. “We believe that everybody is in favor of allowing the extension but it would need to be approved by both boards,” Felts said.

The lease extension will be subject to final approval by the Central Children’s Home of North Carolina board, Felts said. “To my knowledge they have not met to approve it as of today,” he said in an email Wednesday.