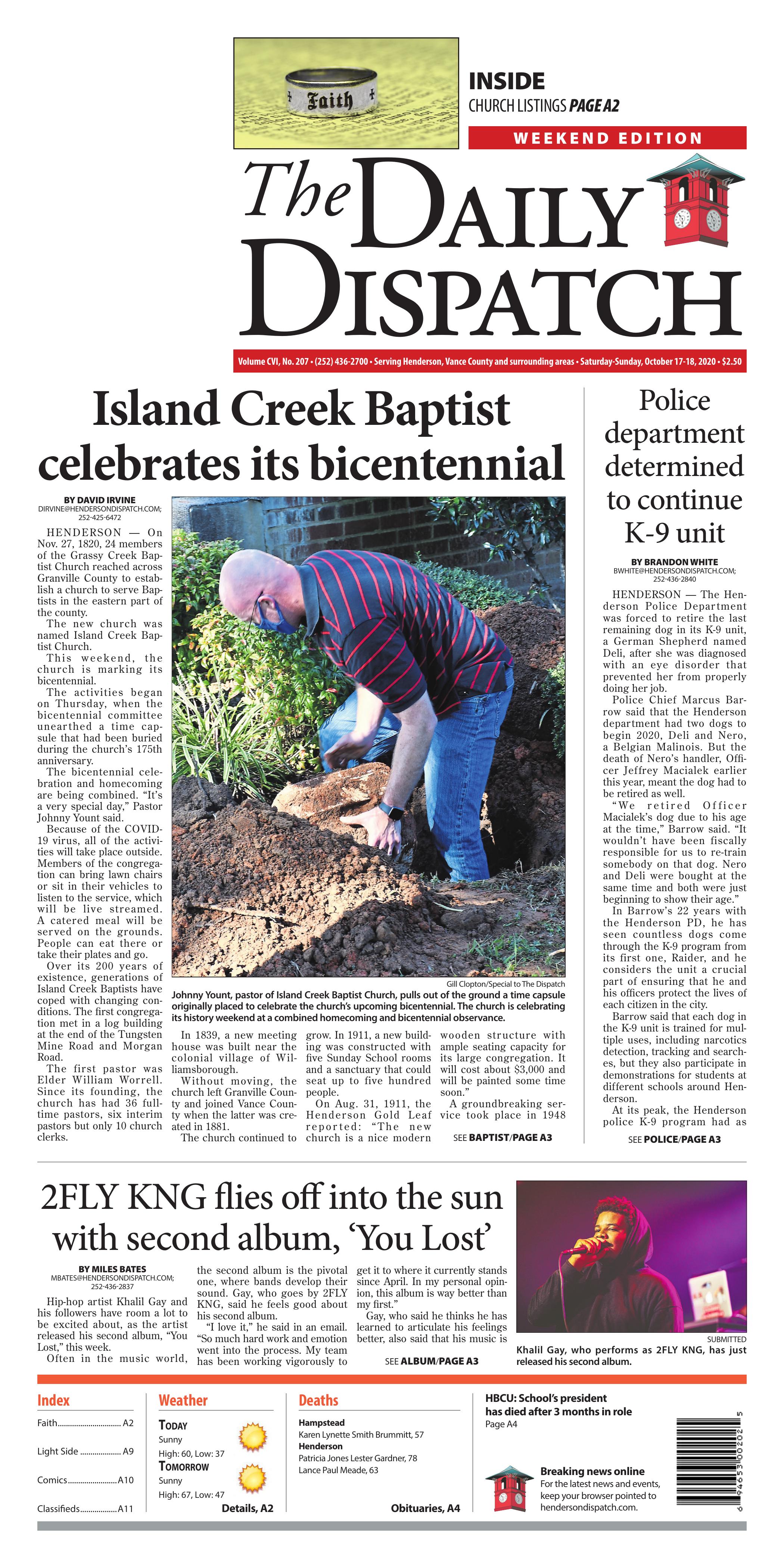 HENDERSON — On Nov. 27, 1820, 24 members of the Grassy Creek Baptist Church reached across Granville County to establish a church to serve Baptists in the eastern part of the county.

This weekend, the church is marking its bicentennial.

The activities began on Thursday, when the bicentennial committee unearthed a time capsule that had been buried during the church’s 175th anniversary.

Because of the COVID-19 virus, all of the activities will take place outside. Members of the congregation can bring lawn chairs or sit in their vehicles to listen to the service, which will be live streamed. A catered meal will be served on the grounds. People can eat there or take their plates and go.

Over its 200 years of existence, generations of Island Creek Baptists have coped with changing conditions. The first congregation met in a log building at the end of the Tungsten Mine Road and Morgan Road.

The first pastor was Elder William Worrell. Since its founding, the church has had 36 full-time pastors, six interim pastors but only 10 church clerks.

In 1839, a new meeting house was built near the colonial village of Williamsborough.

Without moving, the church left Granville County and joined Vance County when the latter was created in 1881.

The church continued to grow. In 1911, a new building was constructed with five Sunday School rooms and a sanctuary that could seat up to five hundred people.

On Aug. 31, 1911, the Henderson Gold Leaf reported: “The new church is a nice modern wooden structure with ample seating capacity for its large congregation. It will cost about $3,000 and will be painted some time soon.”

A groundbreaking service took place in 1948 and the first service was held in the current building on Oct. 22, 1952.

The church has continued to expand, building a parsonage in 1954 and a fellowship hall in 1968.

Mindful of its founding by a sister church, Island Creek has helped the faith expand into the surrounding community.

In 1958, members of the Baptist Men started a lake ministry at Nutbush Bridge State Park on Kerr Lake. Named after one of its early teachers, it is now called C.H. Guerrant Memorial Chapel.

Three other churches have branched off from Island Creek, including Stovall Baptist, Rock Spring Baptist, and Flat Creek Baptist.

In summarizing the history of the church, Yount wrote: “As the oldest Baptist family of faith in Vance County, and with all of its rich history, it is in my opinion, that the greatest legacy and accomplishment that God has allowed us to have at Island Creek Baptist Church has been the souls that have been brought to the saving knowledge of Jesus Christ, and the fellowship within this family of faith that puts God first.”

Archives
2FLY KNG flies off into the sun with second album, ‘You Lost’
SUBMITTED

Khalil Gay, who performs as 2FLY KNG, has just released his second album.

Hip-hop artist Khalil Gay and his followers have room a lot to be excited about, as the artist released his second album, “You Lost,” this week.

Often in the music world, the second album is the pivotal one, where bands develop their sound. Gay, who goes by 2FLY KNG, said he feels good about his second album.

“I love it,” he said in an email. “So much hard work and emotion went into the process. My team has been working vigorously to get it to where it currently stands since April. In my personal opinion, this album is way better than my first.”

Gay, who said he thinks he has learned to articulate his feelings better, also said that his music is “much more ‘listenable’ now.”

His desire was to paint a more holistic picture of himself.

He said that he wanted to give individuals a look into the first 19 years of his life — “the good, the bad, and the ugly,” he said. Plus, he wanted folks to take the message “You Lost” for what “it truly is.”

“Often, we see losses as something to resent and avoid,” he said. “However, this album gives a new perspective on loss and glorifies the process rather than denies the struggle. Perception is key.”

With a new album out and all, there’s still much upcoming, including performances.

His most recent performance was at GMMC Digital in Durham and he has another performance at Arcade of Thrones on Oct. 17, as well as a performance Oct. 19 at Skewers in Durham.

He also has “a lot of new music on the way.”

“You Lost” is available on all streaming platforms, including Spotify (https://spoti.fi/3o8eePM), under 2FLY KNG.

“I would just like to add that I’m overjoyed with the consumer response,” he said. “Knowing that people genuinely have connected with my content so far is very encouraging. I can’t wait for the world to see what else I have in store.”

HENDERSON — The Henderson Police Department was forced to retire the last remaining dog in its K-9 unit, a German Shepherd named Deli, after she was diagnosed with an eye disorder that prevented her from properly doing her job.

Police Chief Marcus Barrow said that the Henderson department had two dogs to begin 2020, Deli and Nero, a Belgian Malinois. But the death of Nero’s handler, Officer Jeffrey Macialek earlier this year, meant the dog had to be retired as well.

“We retired Officer Macialek’s dog due to his age at the time,” Barrow said. “It wouldn’t have been fiscally responsible for us to re-train somebody on that dog. Nero and Deli were bought at the same time and both were just beginning to show their age.”

In Barrow’s 22 years with the Henderson PD, he has seen countless dogs come through the K-9 program from its first one, Raider, and he considers the unit a crucial part of ensuring that he and his officers protect the lives of each citizen in the city.

Barrow said that each dog in the K-9 unit is trained for multiple uses, including narcotics detection, tracking and searches, but they also participate in demonstrations for students at different schools around Henderson.

At its peak, the Henderson police K-9 program had as many as six dogs, but Barrow believes the unit functions most effectively with only a small number of animals that officers can train and bond with over an extended period of time.

“I’m satisfied with having two or three dogs,” Barrow said. “A lot of dedication goes into this program, and in the law enforcement world right now, we’re seeing a lot of officers come and go from various departments. You need about five or seven years to be a great K-9 handler because you form a special bond with that K-9 and you want to stick with that dog.”

Although the Henderson PD K-9 program is depleted, Barrow does not see that lasting, as the department is interviewing potential K-9 handlers, which will determine whether or not an officer can keep up with and bond with an animal at its disposal.

The process, in which candidates will be asked to provide a summary on their work with law enforcement agencies and any other special attributes that could be beneficial to the K-9 program, is expected to last one month.

But Barrow said the main challenge will be trying to obtain the proper funding to afford more dogs.

A dog alone costs $6,500 to $9,000 to acquire, and the department handles its basic training in-house to save money, Barrow said. Food donations from Mars Inc., the pet-food maker that has a factory near Henderson, have also helped lower the program’s cost over the years.

Barrow is optimistic the Henderson PD will be able to obtain enough money to keep the K-9 unit going for several more years. But regardless of what ends up happening over the next few months, he credited everyone who has worked to maintain the program’s efficiency.

“The K-9 program has always been a part of the Henderson PD,” Barrow said. “Hopefully we can continue that tradition because I think we’ve done very well with it. We’re lucky to have a retired officer in Lt. Greg Williams, who’s been a K-9 officer for us over the last 15 [to] 18 years, and he has done such a great job with us.”

Barrow said that the Henderson PD will continue to partner with the Vance County Sheriff’s Office on any request pertaining to K-9’s while he tries to find the right officers and dogs for the department’s own unit going forward.