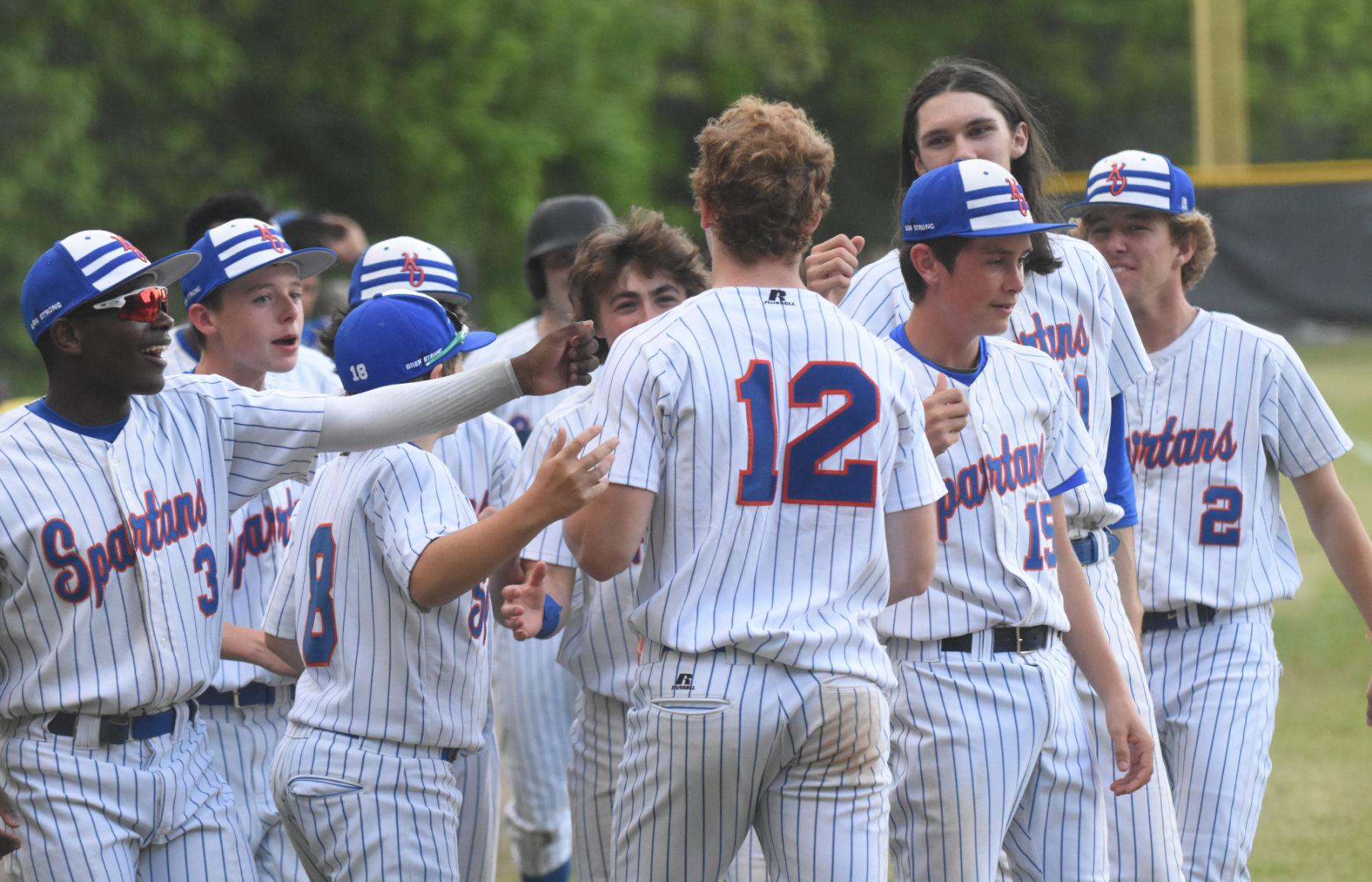 Wimbush started off her senior campaign unsure if she would even be able to play softball but was thrilled to end her final regular-season contest in a Vance County uniform by committing to Winston-Salem State in front of her friends, family and coaches.

“This is very exciting and emotional,” Wimbush said. “I originally wasn’t going to do sports but everyone was in my head telling me that would have been a waste of talent. My coaches helped push me to get me where I am today.”

Wimbush’s love for softball began when she started playing tee ball at the age of 4. She gradually began to harness her talent and athleticism on the field, which helped her carve out a significant role on the varsity softball program for Southern Vance and later Vance County.

Despite going through changes that included a school merger and the COVID-19 pandemic, Wimbush was determined to do what was necessary to get better every day and ensure that her career could continue at the collegiate level.

“There’s nothing better than hustling and running side-to-side in the outfield,” Wimbush said. “Being around my teammates also makes everything better but taking advice from my coaches has really helped me out. My batting is so much better than what it was.”

During her high school career, Wimbush was also a valuable contributor for the Vance County women’s basketball team and took on an expanded role with the program during her abbreviated senior season.

Women’s basketball head coach Sheila Gill-Hargrove, who is also an assistant coach on Vance County’s softball team, has watched Wimbush get stronger with every passing year and knows that she will proudly represent Vance County at her alma mater of Winston-Salem State.

“I’m so proud of this girl,” Gill-Hargrove said. “I coached [Tymiah] in basketball and softball for all four years she was here. She’s a great athlete but she’s also athletic, smart and just a lovable person. She’s one of my favorites and even though I’m sad to see her go, [Winston-Salem State] is getting an awesome player and person.”

Jordan Wilder has been Wimbush’ softball coach since Northern and Southern Vance were consolidated into one facility in 2018 and credited her for helping make Vance County competitive in the sport from the beginning.

Having known Wimbush since she played softball under the guidance of her father, Wilder considers her a close friend and is looking forward to seeing her passion and determination carry her to success long after she graduates from Vance County.

“I’ve seen [Tymiah] grow into a very smart and talented young lady,” Wilder said. “She always gives 100% not only in softball but with anything she does. Tymiah is an overall great person to be around.”

Wimbush is joining a Winston-Salem State program that only played seven games this year because of the COVID-19 pandemic but won four of them. While Wimbush knows that she will have to work hard to find a role in her freshman year, she is looking forward to the challenge and bonding with her new teammates.

Although Wimbush is excited about her future, she said that she thoroughly enjoyed playing for Southern Vance and Vance County and intends to cherish all of the positive memories she has created during the past four years.

“Every day was something different that you could look forward to,” Wimbush said. “I’m going to miss being around the staff more than anything else.”

Wimbush will enroll at Winston-Salem State in the fall and begin training for the upcoming softball season, which is expected to begin in early February.

Anchor tenants like Harbor Freight and Food Lion made the Dabney Drive corridor’s Henderson Mall attractive to a buyer, a Maryland real-estate investment firm that this month spent $7.25 million to acquire the property.

A key vacancy at the Henderson Mall is the space once used by Vance Charter School, which now has its own campus off Ross Mill Road.

Broad Reach Retail Partners, the new owner of the Henderson Mall, hasn’t wasted any time in advertising its presence and already wants to take calls from prospective tenants.

HENDERSON — The Henderson Mall on Dabney Drive has a new owner, a Maryland-based real-estate investment company that of late has been buying retail properties that have Food Lions as their anchor tenants.

The company by that time had already announced the acquisition on its website, as officials for the former owners signed the necessary paperwork April 9.

With capital to deploy, “Broad Reach remains an active buyer of grocery-anchored shopping centers,” said Nate Tower, the Maryland company’s CEO. “We know these types of centers are essential to their surrounding communities, and we know the value Broad Reach can bring by restoring them and filling retail voids to support the needs of their local residents.”

Broad Reach said the mall was 72% occupied and has 188,647 square feet of floor space. Along with the Food Lion, its major tenants are Harbor Freight, Roses and Badcock Home Furniture.

Local business leaders hadn’t known a deal was in the works, but welcomed Broad Reach’s purchase of the property from its former Florida-based owners.

“I think it’s positive news,” said Christian Lockamy, director of the Henderson-Vance Economic Development Corp. “It looks like they’ve been acquiring retail properties over a wide variety of states since 2006. Their goal is to transform the shopping centers by improving them, renovating them and seeking out new tenants. We’ve had newer retail spring up in that Dabney Drive area, so it would likely be a continuation of modern retail offerings for the community.”

Broad Reach’s announcement noted that the Henderson purchase was the third in recent months of a shopping center anchored by a Food Lion in the last six months. It bought the Warsaw Village complex in Warsaw, Virginia, in September and the Avent Ferry center in Raleigh in January.

Food Lions “have outstanding tenant credit and are an excellent draw to the centers they anchor,” said Nate McKay, Broad Reach’s acquisitions officer.

The deal for the Henderson Mall was the first Broad Reach closed using capital from a new investment fund set up to buy East Coast retail properties anchored by a grocery, Walmart or Target store.

Along with that, it’s been looking for acquisition possibilities where there are strong grocery sales, a vacancy rate on the property of 15% or more, a prospective rate of return of 7% or more and a purchase value of between $5 million and $50 million.

The preferred vacancy rate indicates that the company wants room to recruit a good number of its own tenants. Its announcement of the Henderson Mall deal stressed the company’s goal is to “leverage its talented leasing and management teams to revitalize these shopping centers.”

The major vacant space in the mall once housed Vance Charter School, which now occupies its own campus off Ross Mill Road.

“That’s going to be interesting if they can open it back up and we can walk inside again,” said Michele Burgess, president of the Henderson-Vance Chamber of Commerce. “There’s a good amount [of space] where the charter school used to be.”

McKay also noted that investors are interested in being part of deals like this because “convenience-oriented retail, particularly strong grocery-anchored retail, has weathered the pandemic well.”

Lockamy said that while the pandemic “was tough on retail,” local sales tax revenues have actually increase and it “feels like retail is coming storming back.” It thus “doesn’t surprise me” there’s investor interest in properties like the mall,” he said.

Broad Reach is headquartered in Millerville, Maryland, a community about halfway between Baltimore and Annapolis.

HENDERSON — Police say a 29-year-old man was shot Wednesday night at the crossing of Garnett Street and Andrews Avenue after having “an encounter with occupants of another vehicle while at the intersection.”

The victim as of Thursday was in stable condition, Police Chief Marcus Barrow said.

Henderson Police Department officers first learned of the incident at 9:08 p.m. on Wednesday, when a 911 call summoned them to the county magistrate’s office on Rose Avenue. There they found the victim, who’d arrived there on foot, and placed him in care of EMS medics who took him to “a local medical facility.”

Officers quickly located the actual crime scene. The victim had been in a black 2018 Infiniti, traveling west on Andrews Avenue. After gunfire erupted, his vehicle collided with a 2005 Toyota passenger car at the intersection of Andrews and Chestnut Street.

The Toyota’s driver, a Domino’s Pizza delivery driver, suffered “non-life-threatening injuries” in the collision and was taken to a medical facility for treatment, police said.

Police didn’t identify the type of the other vehicle involved, but said the investigation is ongoing.

They asked that anyone has more information about this incident, they get in touch through Henderson-Vance Crime Stoppers at 252-492-1925 or the P3 app, call the Police Department directly at 252-438-4141, or contact investigators through Facebook or Instagram.

OXFORD — Granville County Animal Management has received a $6,000 grant from the Petco Love organization to support the county’s efforts to manage the feral cat population.

The grant will enable animal control officers to trap, neuter and release 90 to 100 feral cats.

“The growing feral cat population is one that we have been addressing over a period of time,” said Animal Management Director Matt Katz. “The [trap/neuter/release] is steadily making an impact, and in a humane way. This funding will allow us to continue our work to safely keep our numbers in check while keeping our euthanasia rate low.”

In 2020, the program helped save the lives of 411 cats and reduce the number that were euthanized.

“There’s a lot of research behind what we’re doing,” Katz told The Daily Dispatch. “It’s the most requested call for service — feral cats.”

In addition to the trap/neuter/release sequence, Animal Management vaccinates the cats before releasing them.

Rabies is a significant problem with cats, particularly because they are more likely to be picked up and played with, Katz said.

Petco Love offers the grants organizations like Granville County Animal Management “as part of our commitment to create a future in which no pet is unnecessarily euthanized,” Petco Love President Susanne Kogut said, as quoted in a news release.

Petco Love is a nonprofit organization promoting the welfare of pets and pet families. Founded in 1999 as the Petco Foundation, Petco Love has invested $300 million in adoption and other lifesaving efforts. In addition, it has helped find homes for more than 6.5 million pets in partnership with more than 4,000 organizations nationwide.