HENDERSON — Vance County Sheriff Curtis Brame says the three deputies facing criminal charges that accuse them of conspiring to mount an end run around North Carolina’s asset-forfeiture laws are suspended pending the resolution of their charges.

But the sheriff also said that while an internal investigation found “violation of office policy and [a] lack of training,” he also believes that “protocol was followed” and “at this time, I do not have any evidence that would warrant the charges brought against them.”

Brame’s comments, issued via an emailed written statement, responded to the booking the day before of his second-in-command, Maj. Steve Staton, and narcotics deputies Mitch Pittman and Purav Patel.

Each faces eight charges in connection with efforts, eventually successful, by the sheriff’s office in the spring of 2020 to acquire a 2007 Cadillac STS that Brame had chased after seeing someone in it conduct what he took as a hand-to-hand drug transaction.

Pittman also faces three additional charges that date from the initial indictment in the case last fall. The N.C. State Bureau of Investigation and a unit in the N.C. Division of Motor Vehicles have been probing the matter at the behest of local prosecutors.

Various court filings have indicated that the sheriff’s office impounded the car and within a day of the brief chase began its efforts to subject the car to forfeiture.

Initially, it tried to work through U.S. Homeland Security Investigations, which for operating under federal law has more latitude than state and local law enforcement to launch forfeiture proceedings.

Staton, a former SBI agent, spearheaded that inquiry and eventually heard back that for federal officials, a forfeiture bid was a “no-go” because of Homeland Security Investigations’ in-house guidelines.

The sheriff’s office then tried going it alone. Pittman and Patel visited a Virginia car dealer who held a lien on the Cadillac, and allegedly there was pressure on the dealer to surrender his interest in the vehicle.

Staton and the deputies also talked to the car’s buyer, a local woman. Once again, there are allegations that she was pressured to surrender title to it.

In theory, asset forfeiture exists to strip criminals of their ill-gotten gains. North Carolina law forfeiture law generally demands court supervision of the process, and restricts when it can occur.

One statute, for example, specifically authorizes the forfeiture of vehicles involved in cases where a driver committed a felony by speeding to elude arrest. But it says it’s up to a judge to allow that, either during the driver’s post-conviction sentencing hearing, at a separate post-conviction hearing, or, if the driver was a no-show in court, at a hearing held at least 60 days after the no-show.

And by law in North Carolina, forfeiture proceeds have to go to the local school system. 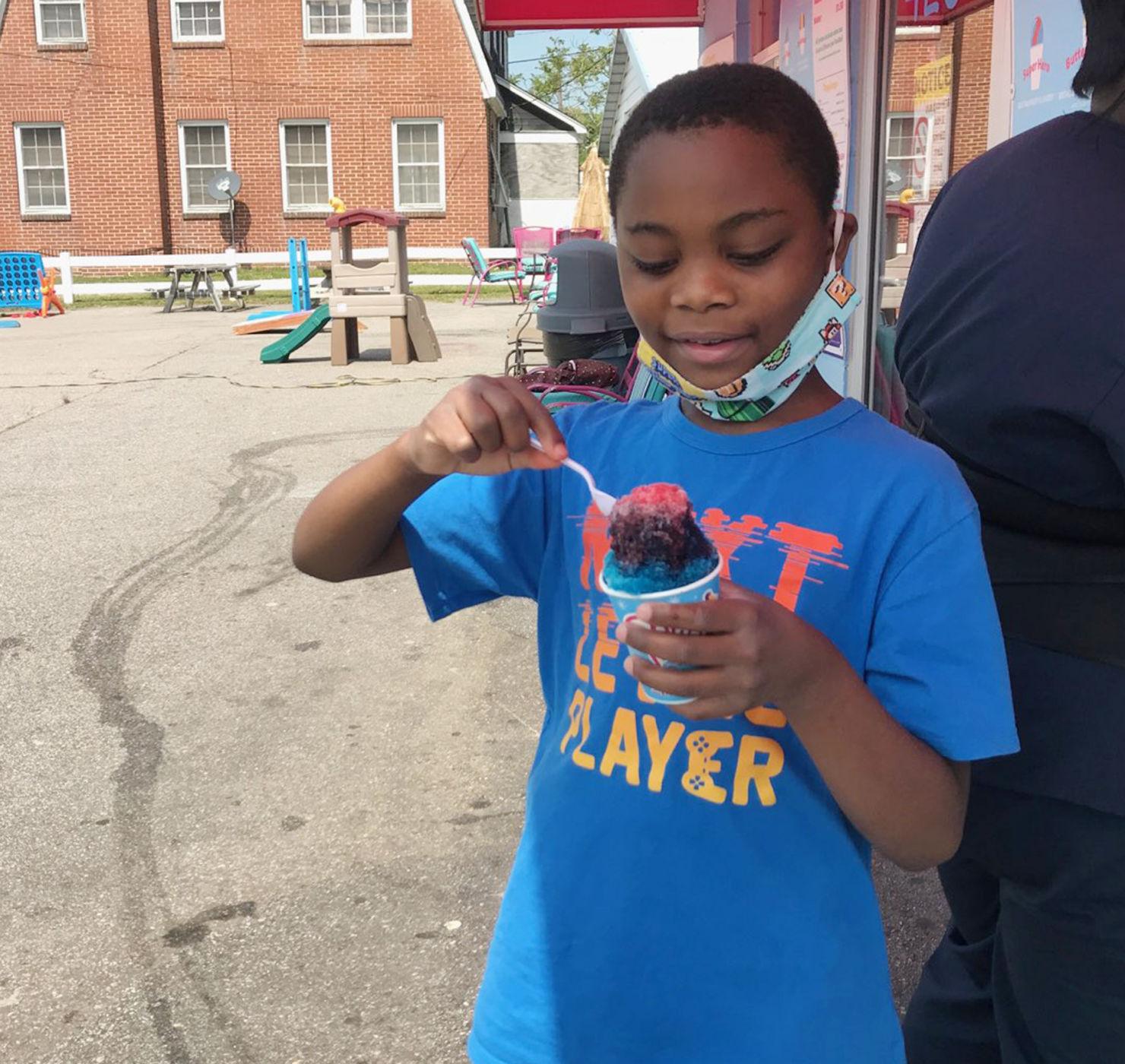 Xavier Williams,10, enjoys a Shark Attack SnoBall at Pelican’s in Henderson on Wednesday.

A cool treat on a warm day

HENDERSON -- The Vance County softball team did not get the outcome they were looking for on senior night Tuesday, as they fell to Cedar Ridge by a score of 8-3.

Head coach Jordan Wilder believed Vance County did everything they needed to do to keep pace with Cedar Ridge but attributed the loss to a handful of lackluster sequences on the plate and on the mound.

“Everybody played real good,” Wilder said. “Blake [Vick] did a great job on the mound but I think we could have been a little better batting and been more selective with the pitches.”

Vance County had previously defeated Cedar Ridge 7-4 on the road back on April 8 but Wilder knew that the rematch would be anything but easy with the two programs holding on to identical records.

The game remained scoreless until the top of the third inning when Cedar Ridge junior Takia Nichols knocked a solo home run out towards centerfield. Three more Cedar Ridge runners reached home plate to give their team a 4-0 lead.

Nichols continued to cause problems for Vance County at the top of the fourth with another home run that increased Cedar Ridge’s lead to seven. Sophomore Kynnedy Keel tried to give Vance County some momentum with a home run of her own but this only trimmed the deficit down to five.

The gap between the two programs stayed at five runs all the way until the seventh inning as Cedar Ridge successfully prevented Vance County from rounding the bases and denied them a victory on senior night.

While Vance County was not able to get the win Tuesday, senior Tymiah Wimbush considers the 2021 season a success knowing that she had one more opportunity to play alongside her teammates and develop as a player despite the ongoing COVID-19 pandemic.

“I thought we weren’t even going to have a season this year,” Wimbush said. “It felt great being able to play this whole season without interruptions. I’ve played a big leadership role in trying to encourage everybody and I’ve continued to work hard and get better each day.”

Wilder said that the senior class of Wimbush, Malia Simmons, Victoria Dominguez and Zarmiya Watson has been instrumental in the development of softball at Vance County since its inception back in 2018, adding that their presence on and off the field will be missed next season.

“Tymiah, Malia and Victoria have been starters all three years,” Wilder said. “Zarmiya has come in and emerged as a starter this year. Malia plays such a big role behind the plate and Tymiah can really run the balls down in centerfield. Victoria has been out most of the year but she is solid everywhere on the field. All of them have had such a tremendous impact on this team.”

The Continuum Global Solutions facility in Henderson has just recently started letting employees back into their facility but the company also plans to take part in numerous outreach programs that include partnerships with the Men’s Shelter and Community Partners of Hope Inc.

HENDERSON — After having employees work remotely during the past year due to the COVID-19 pandemic, the Continuum Global Solutions facility in Henderson has started the process of bringing people back into the building.

Lindsy Dethmers, director of service delivery operations for Continuum’s Henderson location, believes that COVID-19 case counts have gone down enough to warrant the facility’s reopening and is hoping to have more work take place there during the next few months.

“We’ve been here a long time and we’ve employed anywhere between 200 [and] 600 people given the time of year,” Dethmers said. “We’ve been a long-standing employer in Henderson and we’re just excited to be back on the site.”

Continuum specializes in call-center services that handle pharmacy benefit calls for health insurance providers, which include questions about refilling and ordering medications, co-pays and pre-certifications.

Along with having more than 8,000 employees in the United States alone, Continuum’s mission to deliver a better customer care experience has expanded to serve people in countries like Germany, India, Argentina, the Netherlands and others.

Since arriving in Henderson in 2003 under the name ACS, Continuum has strived to build a positive relationship with the community, which Dethmers believes remains strong to this day.

Dethmers said she is always looking for different ways in which Continuum could become more involved with daily life in Henderson, but she affirmed that the company intends to spend the rest of 2021 giving back to residents in need.

“Our goal is to do an outreach with the community every other month,” Dethmers said. “For April, we partnered with the Men’s Shelter and we took a lot of food items, toiletries and socks over there after asking them what they needed. We had so much stuff that they didn’t have anywhere to put it.”

While Continuum has been involved with events like adopting children through a partnership with Vance County Social Services, Burris said the company wants to increase its positive influence in the community, especially since many local residents are dealing with financial issues brought on by the pandemic.

Dethmers plans to have Continuum join together with the Men’s Shelter again in October, as it will need more supplies and assistance during the fall. She has also talked with Community Partners of Hope Inc. about a potential partnership with Continuum.

Dethmers is pleased that Continuum’s charity work now has some organization going forward, but she is also relieved simply to get the building back open again in a manner that is safe for all employees.

Dethmers envisions more Continuum facilities following the same path as COVID-19 case counts continue to trend down, as employees that are allowed to enter the building are smoothly transitioning back into their old work environment.

“We’re one of the first [Continuum] sites to reopen, so everyone is excited to be back,” Dethmers said. “We can see the smiles behind the masks and it feels good to have some normalcy and some structure.”

Now that more Continuum employees are returning to the facility, Dethmers said that there will soon be a need for more staff and that on-site hiring would be taking place at the building later this year.