OXFORD — Granville County’s school board has asked the County Commissioners to raise local spending in K-12 education by $758,591 in fiscal 2021-22.

Because charter schools that serve Granville County students get a cut of the local allocation, the increase would actually translate into an additional $584,115 for the Granville County Public Schools, district officials said.

System officials say the additional money would cover their estimate of the increased costs that come with state-mandated salary and benefit changes for teachers and other employees.

Board members approved the request on April 19. Member Tom Houlihan said that county leaders have “heard clearly the money that we need for personnel” cost increases. They have made “no promises” about fully funding the system’s request, but have yet to signal that it “ain’t going to happen.”

The 37 charter schools that serve Granville County students would collectively receive about $4.2 million in fiscal 2021-22, about 11% more than the $3.7 million in local money they’re receiving now.

Either way, that’s more than the $3.3 million in local money — largely revenue from property taxes — that Granville County Public Schools officials expect to spend in the upcoming fiscal year on pay supplements for teachers over and above the state’s pay scale.

Like all traditional K-12 school systems in the state, Granville’s gets the majority of its money from the N.C. General Assembly and the N.C. Department of Public Instruction. But each year’s allocation varies with a system’s enrollment, and GCPS has been losing students to charter schools.

Officials expect that trend to continue in fiscal 2021-22.

The budgett’s built around local and state assumptions that while there will be a slight increase in the number of K-12 students from Granville County, charter schools will absorb that and continue to siphon students away from GCPS campuses.

They also suggest charter schools — not all of them in Granville County or even the Tri-County region — will enroll 2,066 students from Granville County in the upcoming school year. That’s nearly a 24% increase on the current 1,671.

The loss of enrollment will trigger the loss of nearly $2.5 million in annual funding from the state, and a reduction, district officials say, of 25 full-time jobs in the district.

That’s a $35,900 increase to the current allocation, and is in line with an increase county officials are floating for their own government’s capital spending.

Those figures don’t include money from the $15 million the county pledged to the school system in 2017 to clean up and prevent mold and ventilation problems in the district’s schools.

Houlihan asked whether officials have considered asking the county for more than $1.5 million, given that the school district’s facilities have a lot of problems that go beyond mold and decrepit HVAC systems.

“They came up with the $15 million, but what’s the next thing coming down the line?” he said. “Our job by law is to tell them what we need, and their job is to figure out how to fund it.”

But Beth Day, the system’s assistant superintendent for finance, said the system’s prior requests for major increases in capital aid haven’t gotten anywhere. 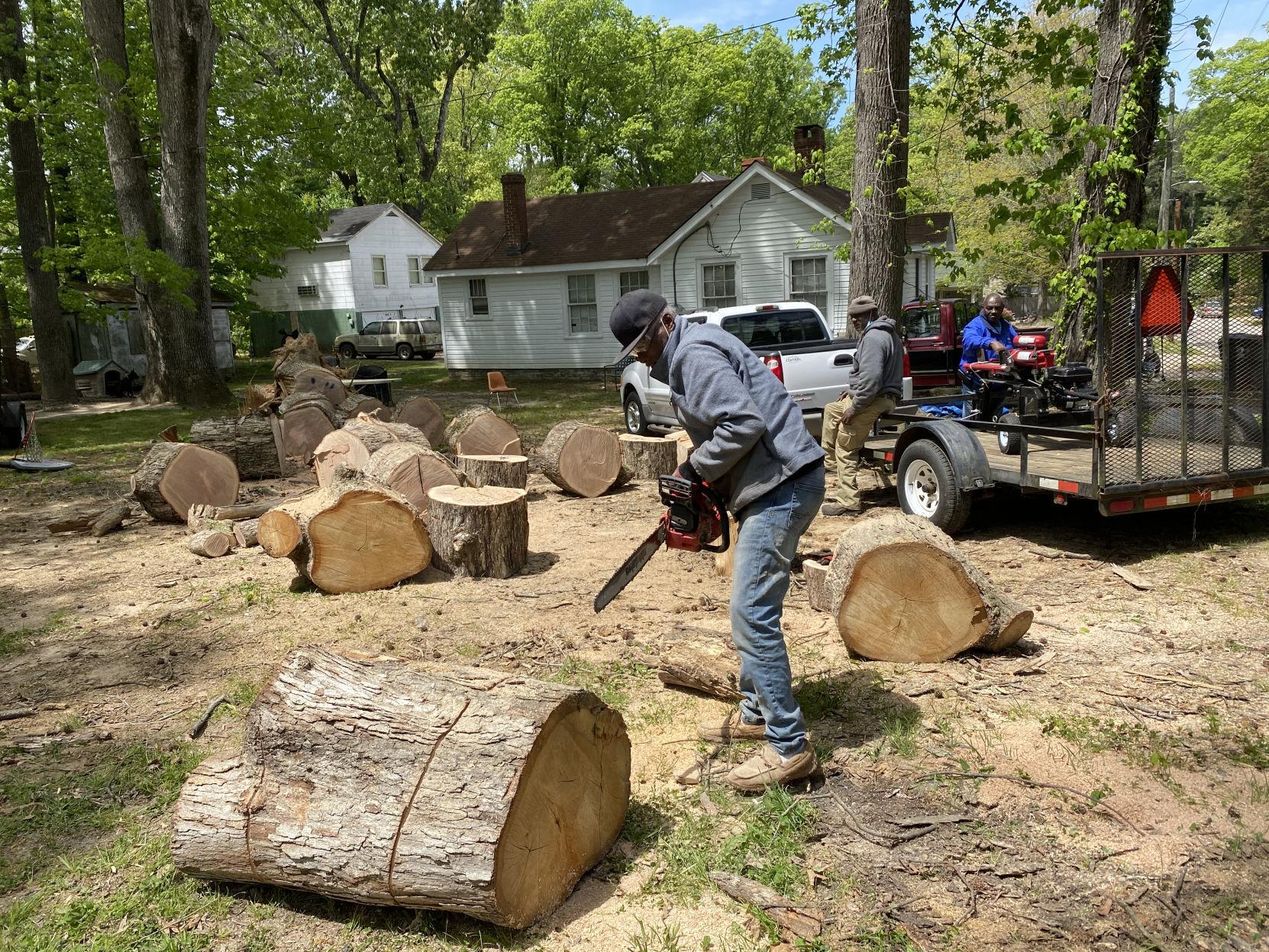 Robert Bullock sizes up the progress he’s made trying to reduce a chunk of white oak into something more manageable, as fellow cutters Norman Bullock (center) and Clint McKoy (right) look on. They were working on Zollicoffer Avenue on Friday and were taking the remains of the tree away for use as firewood.

Paul Martino is the new general manager of the Henderson Country Club.

HENDERSON — The Henderson Country Club has a new general manager.

In July, 2020, the club engaged the Bobby Jones Links Group to manage the club, ending the services of Robert Mueller, who had served as general manager for about two years.

Martino assumed his duties on Monday.

“On day four, I don’t know any changes we’ll make,” he told The Daily Dispatch. “I’m trying to take it all in.”

Martino, 54, brings 31 years of experience to the job. For the past 17 years, he was director of golf and general manager for the Robert Trent Jones Golf Trail at Magnolia Grove, a 54-hole club in Mobile, Alabama.

Prior to that, he served the same functions for five years at RTJ Golf Trail at Highland Oak in Dothan, Alabama.

He began his career at Shipyard Golf Club in Hilton Head, South Carolina, where he spent nine years as “events/membership/golf pro.”

Martino grew up in West Virginia, but he has established ties to the South. His sister is a nurse in Durham. And he has spent his career in South Carolina and Alabama.

His wife, Melissa, is a preschool teacher in Mobile. She is staying there until school is out, Martino said, and “selling the house.” He added that they will wait until she joins him here before deciding where they will live.

He and Melissa have two children, a 22-year-old son and a 19-year-old daughter who is a freshman at Auburn University, majoring in journalism.

Martino emphasized his role as supporting the club’s Board of Directors. “I’m here to serve them and advise them the best I can,” he said.

He was quick to point out that, although the Bobby Jones Links Group is providing management services, the members own the club. The measure of success he achieves as general manager will be defined by what the members see as success, he said.

One test of success he has already set down. “I want every member who walks through the door to be proud of the club,” he said.

Crossroads Christian women’s soccer player Tori Renna drills one of her five goals into the back of the net during her team’s 6-2 victory over Lee Christian on senior night Thursday.

HENDERSON — The Crossroads Christian women’s soccer team had plenty of reasons to celebrate on senior night Thursday, as it defeated Lee Christian 6-2 due to a five-goal performance from junior Tori Renna.

Thursday’s triumph gave Crossroads their seventh victory on the 2021 season, the most wins recorded in the history of the program. But head coach Holden Coghill believes that many more winning seasons are on the horizon for Crossroads.

“I’m so proud of these girls,” Coghill said. “The momentum that we’ve made this year is going to create a ripple effect. This is going to be a program-changing season and it’s so cool that it ends up culminating on senior day.”

Although the Colts got the start they were looking for by relentlessly attacking Lee Christian’s end of the field, Lee Christian got on the board first after converting a penalty kick just before the mask timeout.

Renna helped Crossroads take control after the brief intermission, as she sprinted down the field and scored two quick goals with almost no resistance from Lee Christian. Freshman Hailey Grissom added Crossroads’ third goal before Renna closed out the half by registering a hat trick.

Neither team would score again until 16:57 remaining when Lee Christian snuck a shot past Crossroads goalkeeper Justice Simmons. But the visitors' hopes for a win evaporated shortly afterwards as Renna drilled two more shots into the back of the net to seal the victory for her team.

“I’ve challenged Tori to be a little more assertive,” Coghill said. “I want her to be aware of more situations in which she is the best option on her own and I’m proud of her for having that presence and awareness to take the game by the scruff of the neck at times.”

Coghill affirmed that Crossroads currently stands at 7-5 on the season in large part because of the leadership and guidance of his senior class that consists of Simmons, Hope Hollingsworth and Anna Parker, the latter of which could not play in Thursday’s game due to COVID-19 protocols.

Hollingsworth said that she is proud of everything that the soccer team has accomplished in a year hampered by the COVID-19 pandemic, and she is confident  her younger teammates will continue to build on the foundation from this season long after she graduates from Crossroads.

“This is really exciting for the program as a whole,” Hollingsworth said. “I know this feels great for the younger girls and I hope they can keep this up.”

Hollingsworth, Simmons and Parker all played multiple sports during their time at Crossroads, with Simmons admitting that she will miss the friendships that she has created with her teammates after she plays her final soccer match.

“It’s been really great to play sports here at Crossroads,” Simmons said. “We’ve had some rough times but it’s been very fun overall and I’ve had a great time myself.”

Simmons, Hollingsworth, Parker and the rest of the Crossroads women’s soccer team will now be moving on in the NCISAA 1A playoffs, where Coghill is optimistic that the program’s record-setting season will keep going for a few more games.

“We’ve got a good niche right now but we have to keep the system going,” Coghill said. “Everyone is playing like the best version of themselves and as long as we control the controllables and do the things we know how to do, we’ll be fine. We’re in uncharted waters and right now we’re just enjoying the ride.”

Crossroads will play on the road in the Mid-Carolina Conference Tournament on Thursday against Southside Christian.