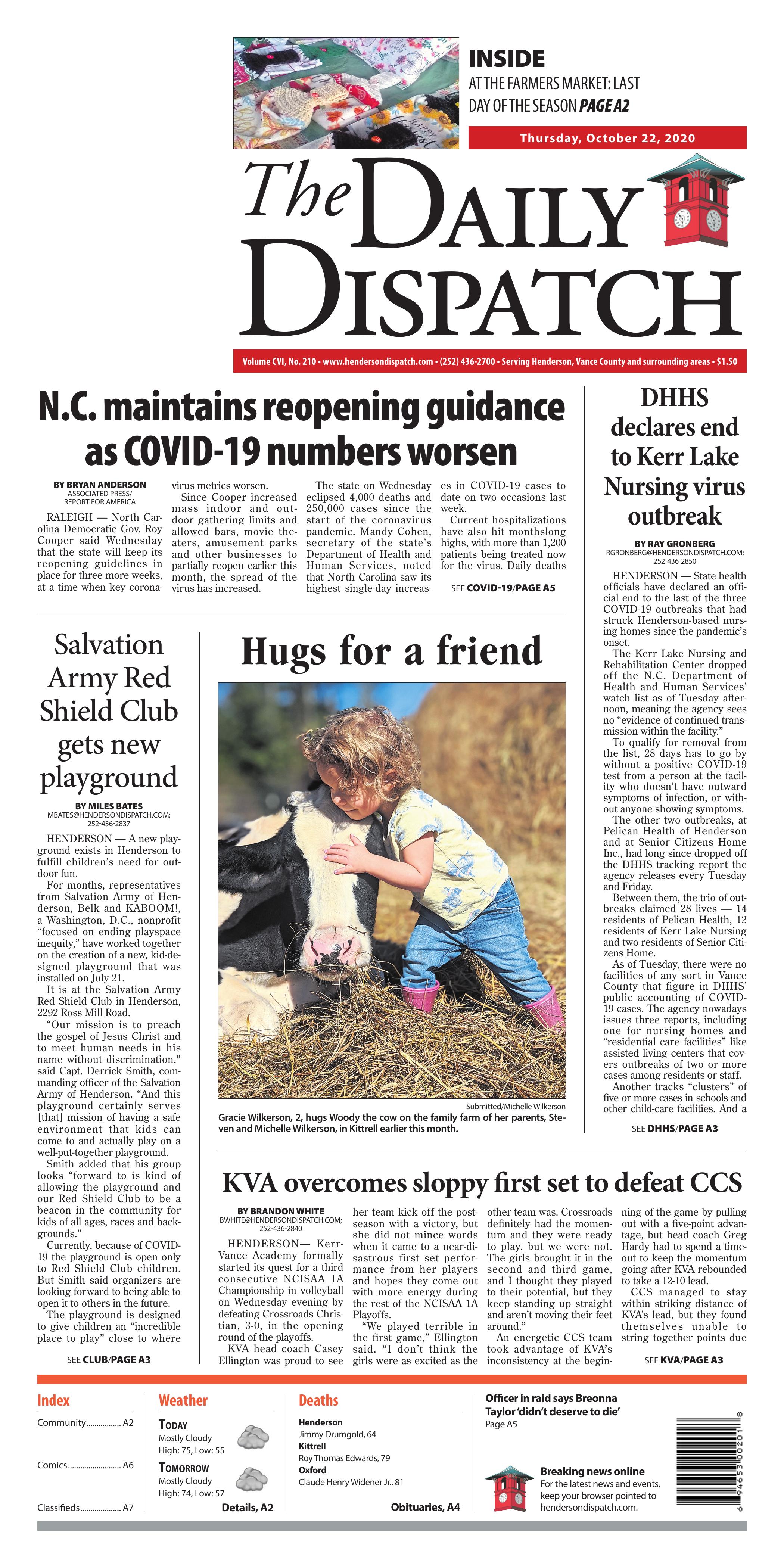 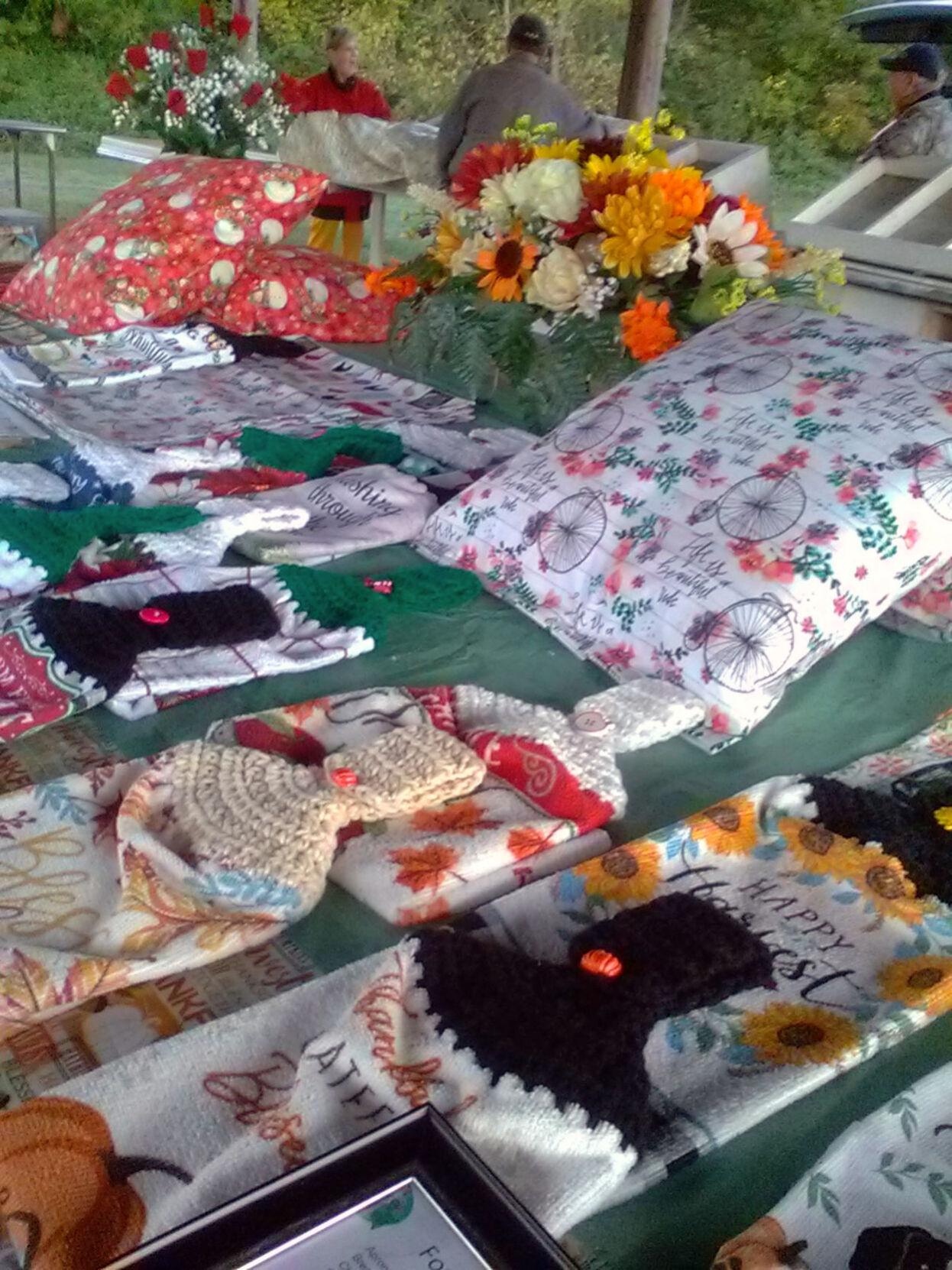 Start your Christmas shopping this week at the Oxford Farmers Market. 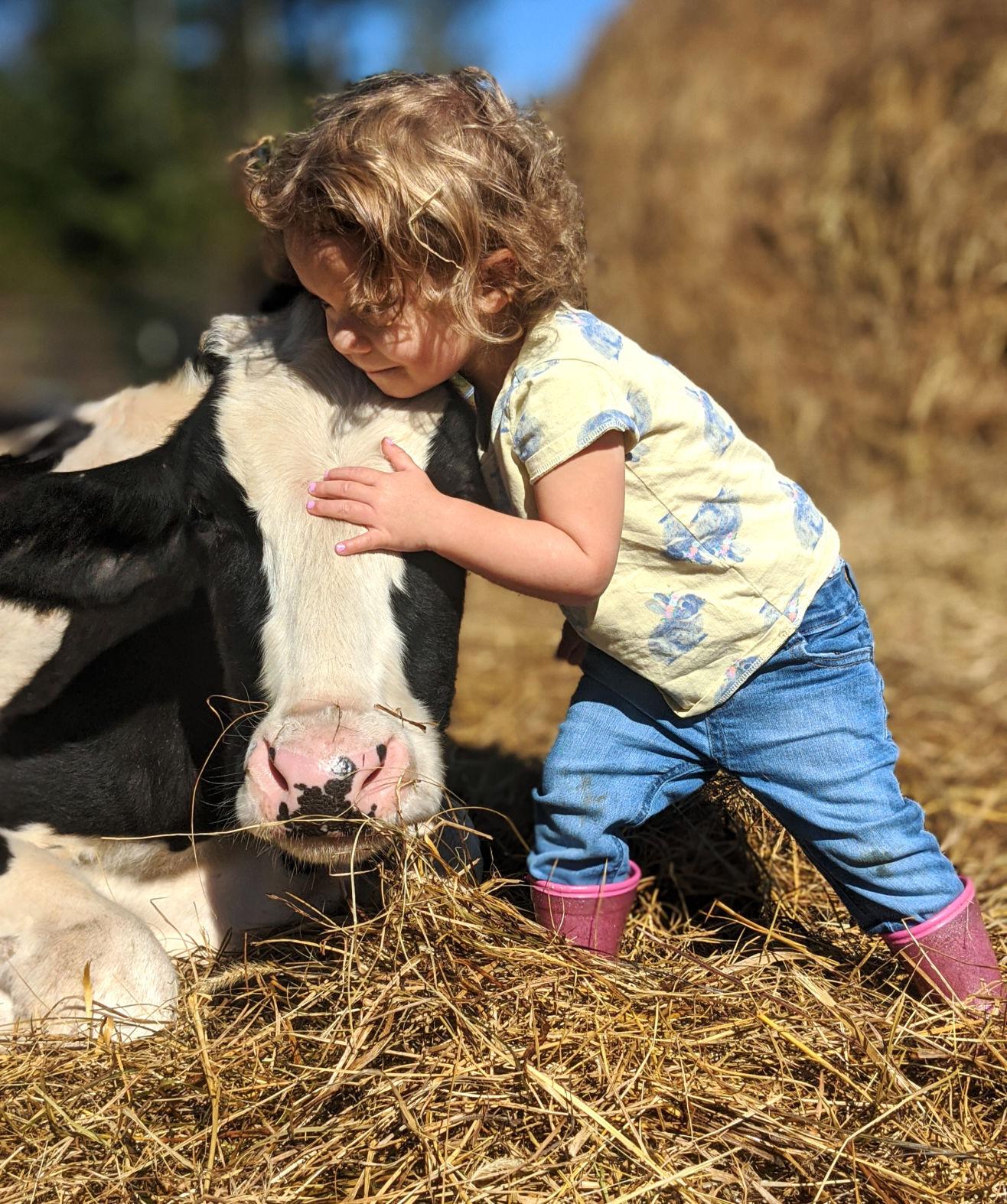 Gracie Wilkerson, 2, hugs Woody the cow on the family farm of her parents, Steven and Michelle Wilkerson, in Kittrell earlier this month.

Kerr-Vance Academy volleyball player Juliana Negron (21) knocks the ball back over the net while her teammate Blaire Boyd (1) watches during their team’s 3-0 victory over Crossroads Christian on Wednesday night, which advanced KVA into the quarterfinals of the NCISAA 1A Playoffs.

HENDERSON— Kerr-Vance Academy formally started its quest for a third consecutive NCISAA 1A Championship in volleyball on Wednesday evening by defeating Crossroads Christian, 3-0, in the opening round of the playoffs.

KVA head coach Casey Ellington was proud to see her team kick off the postseason with a victory, but she did not mince words when it came to a near-disastrous first set performance from her players and hopes they come out with more energy during the rest of the NCISAA 1A Playoffs.

“We played terrible in the first game,” Ellington said. “I don’t think the girls were as excited as the other team was. Crossroads definitely had the momentum and they were ready to play, but we were not. The girls brought it in the second and third game, and I thought they played to their potential, but they keep standing up straight and aren’t moving their feet around.”

An energetic CCS team took advantage of KVA’s inconsistency at the beginning of the game by pulling out with a five-point advantage, but head coach Greg Hardy had to spend a timeout to keep the momentum going after KVA rebounded to take a 12-10 lead.

CCS managed to stay within striking distance of KVA’s lead, but they found themselves unable to string together points due to multiple self-inflicted errors, which allowed KVA to survive with a 25-17 win in the first set.

After KVA and CCS exchanged points to begin the second set, KVA gradually began to establish control by taking an 8-4 lead. Another timeout by Hardy proved to be ineffective in getting his players composed, as they were forced to regroup for the final set after falling 25-8.

KVA promptly ended CCS’ season by scoring the first seven points in the third set before claiming a 25-10 victory. The loss dropped CCS’ overall record to 0-12 on the year, with the program only registering a point in both games against Community Christian in September.

Although Hardy was disappointed that his team could not get a victory in the shortened 2020 season, he extended his praise towards his players for their hard work towards building team chemistry and knows that everyone, particularly his senior class of Anna Parker, Justice Simmons and Hope Hollingsworth, are departing the season as better individuals.

“I can’t imagine that there is a nicer team out there,” Hardy said. “They love each other and play well with one another. I’m extremely proud to coach these girls. It’s hard to lose, but the losses didn’t break their hearts. They are not losers, but they just didn’t win games. They are champions in my book and champions in God’s eyes.”

While Hardy turns his attention towards early preparations for 2021, Ellington intends to have her players thoroughly focus on maintaining proper footwork and ball handling, as she knows other programs will take advantage of those openings with a state championship on the line.

“We are going to work on a couple of drills that will help keep the girls down and ready for when the ball comes back over the net,” Ellington said. “I think we can improve on serve receiving and passing could be a little bit better as well.”

KVA will stay at home for the quarterfinals of the NCISAA 1A Playoffs on Friday, where they will host Greenfield, who KVA previously defeated on Sept. 25 by a score of 3-0.

HENDERSON — State health officials have declared an official end to the last of the three COVID-19 outbreaks that had struck Henderson-based nursing homes since the pandemic’s onset.

The Kerr Lake Nursing and Rehabilitation Center dropped off the N.C. Department of Health and Human Services’ watch list as of Tuesday afternoon, meaning the agency sees no “evidence of continued transmission within the facility.”

To qualify for removal from the list, 28 days has to go by without a positive COVID-19 test from a person at the facility who doesn’t have outward symptoms of infection, or without anyone showing symptoms.

The other two outbreaks, at Pelican Health of Henderson and at Senior Citizens Home Inc., had long since dropped off the DHHS tracking report the agency releases every Tuesday and Friday.

Between them, the trio of outbreaks claimed 28 lives — 14 residents of Pelican Health, 12 residents of Kerr Lake Nursing and two residents of Senior Citizens Home.

As of Tuesday, there were no facilities of any sort in Vance County that figure in DHHS’ public accounting of COVID-19 cases. The agency nowadays issues three reports, including one for nursing homes and “residential care facilities” like assisted living centers that covers outbreaks of two or more cases among residents or staff.

Another tracks “clusters” of five or more cases in schools and other child-care facilities. And a third, relatively new, tracks coronavirus clusters in other types of work, social and health-care settings without breaking down its numbers by county or identifying specific locations.

DHHS relies on the N.C. Department of Public Safety and the Federal Bureau of Prisons to report outbreaks in state and federal prisons.

The N.C. Department of Public Safety’s reporting indicates that there’s been a COVID-19 outbreak at the Warren Correctional Institution. There, 15 inmates have tested positive for the virus, with 12 of those having “active cases” of COVID-19. One inmate is presumed to have recovered from the virus.

The positive-test numbers can include former inmates, while those for active cases and recoveries only include people who are still behind bars, the department says.

An outbreak at the Butner federal prison in Granville County remains the region’s largest, and has claimed the lives of 26 inmates and a prison guard. As of Tuesday the Federal Bureau of Prisons was reporting that seven Butner inmates and five staff members had “active cases” of COVID-19.

Also in Butner, at the state’s Polk Correctional Institution, six inmates have tested positive for COVID-19. One has an active case, and two are presumed to have recovered.

Elsewhere in Granville County, DHHS is still tracking an outbreak at the Universal Health Care nursing home in Oxford that’s claimed the lives of 21 of the home’s residents. All told, there have been 140 cases there, with 96 of those being residents and the other 44 Universal Health staffers.

Also remaining on the list is an outbreak at the state’s Murdoch Developmental Center in Butner. There, 44 cases among residents and 57 among facility staff include one that cost a resident his or her life.

One other outbreak in the region, at the Franklin Oaks Nursing and Rehabilitation Center in Louisburg, has produced two positive COVID-19 tests, both affecting staff members of the Franklin County facility.

Granville-Vance Public Health reported on Tuesday that four people from Vance County and four from Granville County are hospitalized for treatment of the virus.

Statewide hospitalization numbers are up, but in the Duke Health-led region that includes Vance and Granville counties they’ve been trending down for the past week or so, according to DHHS reporting.

For months, representatives from Salvation Army of Henderson, Belk and KABOOM!, a Washington, D.C., nonprofit “focused on ending playspace inequity,” have worked together on the creation of a new, kid-designed playground that was installed on July 21.

It is at the Salvation Army Red Shield Club in Henderson, 2292 Ross Mill Road.

“Our mission is to preach the gospel of Jesus Christ and to meet human needs in his name without discrimination,” said Capt. Derrick Smith, commanding officer of the Salvation Army of Henderson. “And this playground certainly serves [that] mission of having a safe environment that kids can come to and actually play on a well-put-together playground.

Smith added that his group looks “forward to is kind of allowing the playground and our Red Shield Club to be a beacon in the community for kids of all ages, races and backgrounds.”

Currently, because of COVID-19 the playground is open only to Red Shield Club children. But Smith said organizers are looking forward to being able to open it to others in the future.

The playground is designed to give children an “incredible place to play” close to where they live and learn, an opportunity that’s often difficult to achieve, organizers said in announcing the project.

In May, children from the community participated in a virtual Design Day where they “creatively thought of ideas” to make their “dream playground,” organizers said.

The new playground was then designed with “inspiration” from their drawings. It includes features like slides, a jumping platform and a rock-climbing wall.

Organizers hope “in the next few years to have ballfields, so that would include ... soccer and baseball fields,” Smith said. “The playground would actually be between the building and the ballfields. So, it’s going to complement it very well. I think at that point we will certainly be able to have community kids come and play on that playground.”