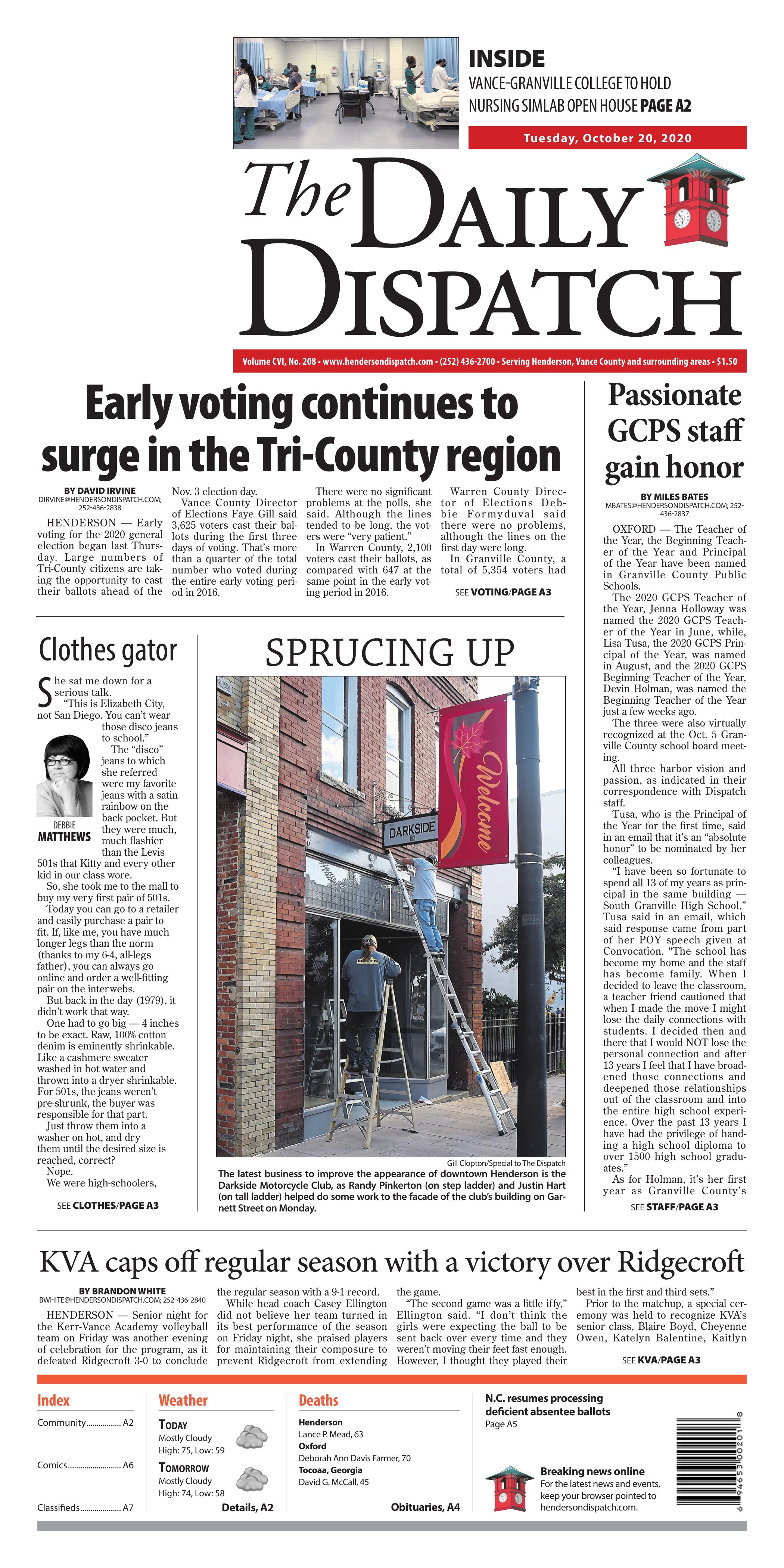 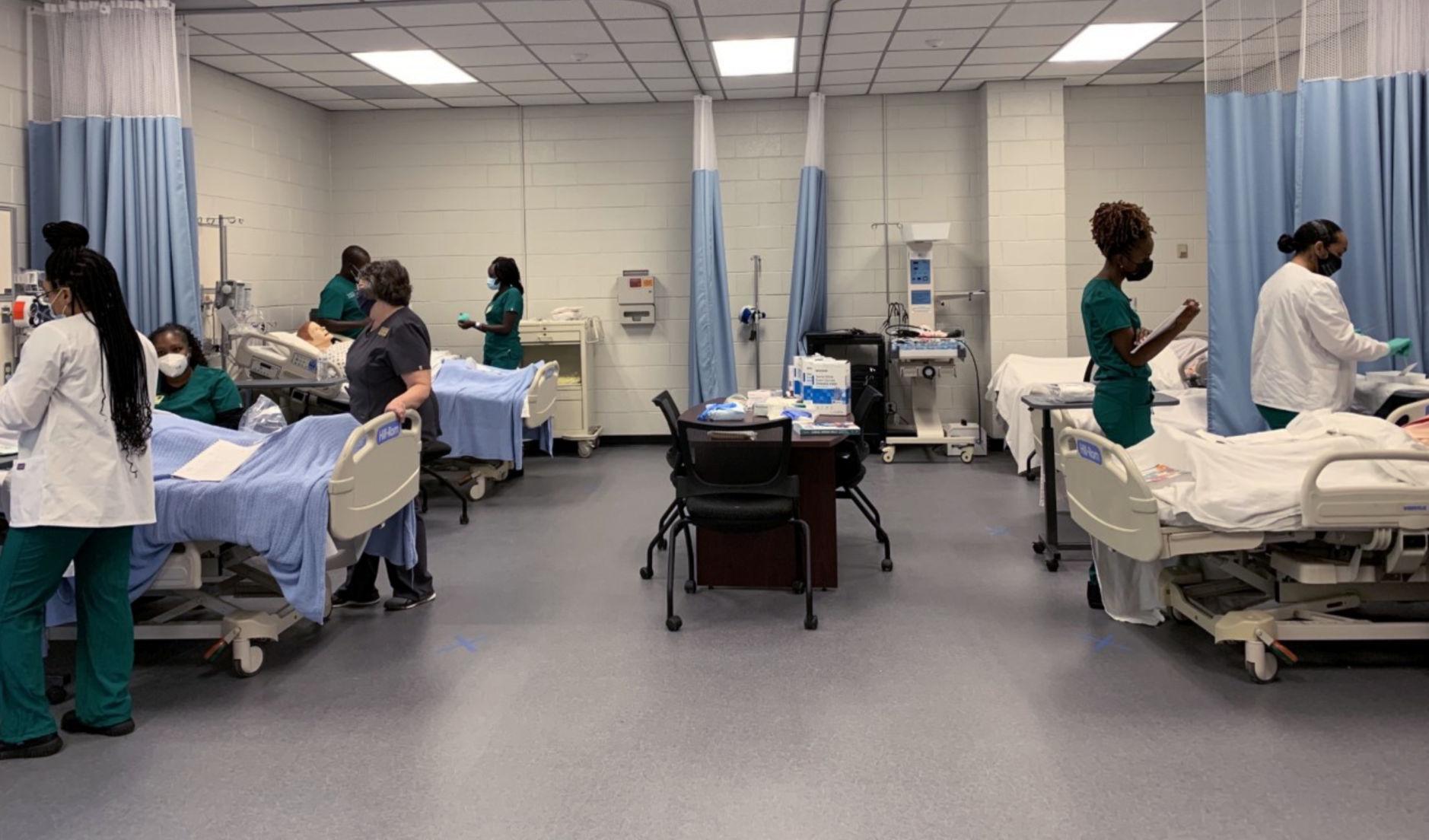 Vance-Granville Community College is holding a open house for its new Nursing SimLab on Friday, Oct. 23, from noon to 3 p.m. in the Main Campus Building 3, Room 3209. This is a floating event and we ask that you sign up to attend in a 30-minute time slot (limited to 15 people per time slot) so that we can ensure social-distancing measures. Face coverings are also required. Sign up at https://www.signupgenius.com/go/10C084EA5A62EA5FD0-nursing1.

HENDERSON — Early voting for the 2020 general election began last Thursday. Large numbers of Tri-County citizens are taking the opportunity to cast their ballots ahead of the Nov. 3 election day.

Vance County Director of Elections Faye Gill said 3,625 voters cast their ballots during the first three days of voting. That’s more than a quarter of the total number who voted during the entire early voting period in 2016.

There were no significant problems at the polls, she said. Although the lines tended to be long, the voters were “very patient.”

In Warren County, 2,100 voters cast their ballots, as compared with 647 at the same point in the early voting period in 2016.

Warren County Director of Elections Debbie Formyduval said there were no problems, although the lines on the first day were long.

In Granville County, a total of 5,354 voters had cast their ballots by mid-morning on Monday. Board of Elections Director Tonya Burnette said that total was “way more” than in the 2016 general election.

The lines at the polling sites have been long and moving slowly, she said. Because of precautions related to the COVID-19 outbreak, voters had to socially distance and poll workers had to disinfect voting stations after each voter.

Each county in the Tri-County area has designated a number of sites for early voting. 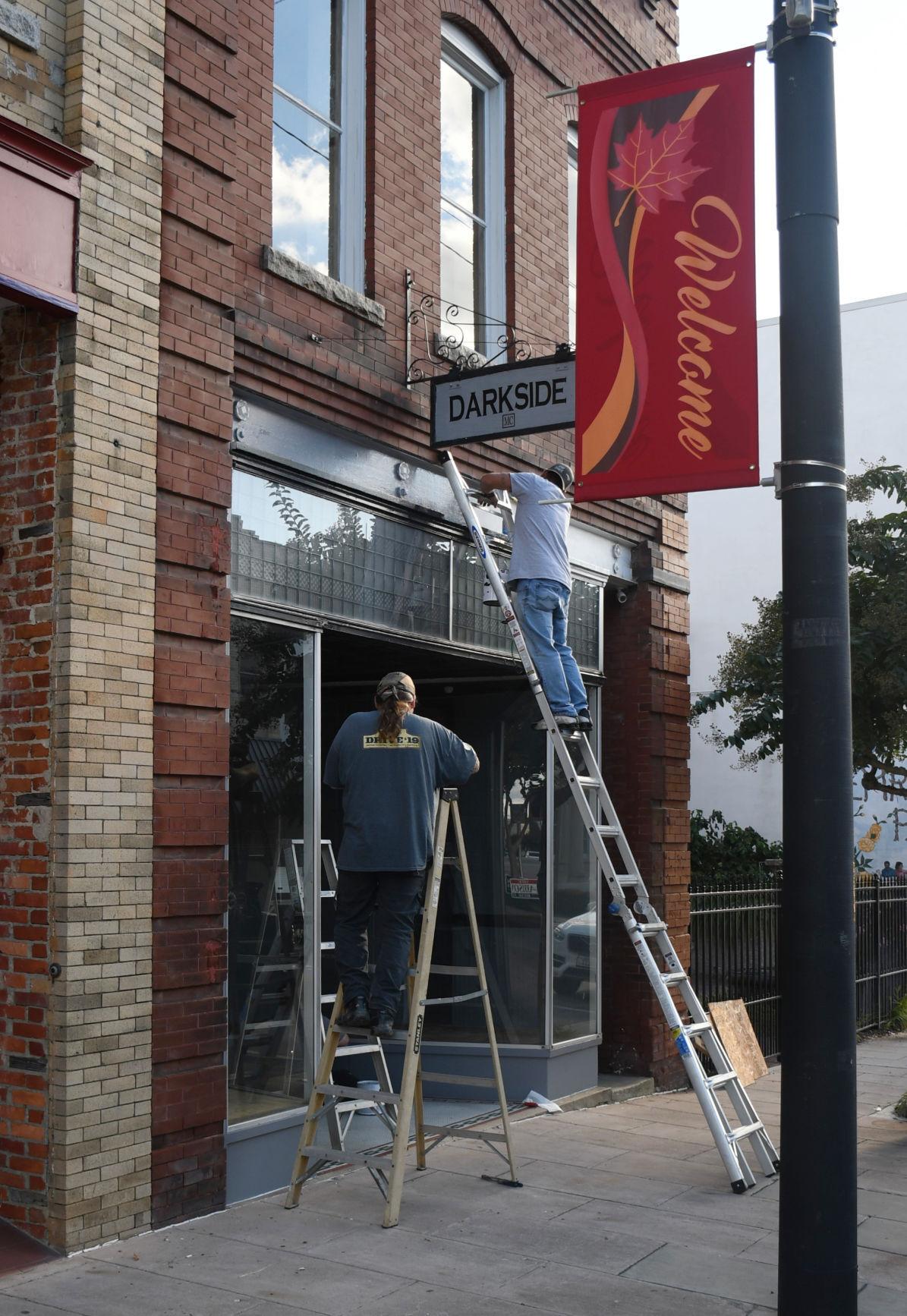 The latest business to improve the appearance of downtown Henderson is the Darkside Motorcycle Club, as Randy Pinkerton (on step ladder) and Justin Hart (on tall ladder) helped do some work to the facade of the club’s building on Garnett Street on Monday.

Kerr-Vance Academy volleyball player Cheyenne Owen (6) knocks the ball back over the net during her team’s 3-0 victory against Ridgecroft on Friday. Owen was one of six seniors to be honored in a special senior night ceremony prior to the matchup.

HENDERSON — Senior night for the Kerr-Vance Academy volleyball team on Friday was another evening of celebration for the program, as it defeated Ridgecroft 3-0 to conclude the regular season with a 9-1 record.

While head coach Casey Ellington did not believe her team turned in its best performance of the season on Friday night, she praised players for maintaining their composure to prevent Ridgecroft from extending the game.

“The second game was a little iffy,” Ellington said. “I don’t think the girls were expecting the ball to be sent back over every time and they weren’t moving their feet fast enough. However, I thought they played their best in the first and third sets.”

Prior to the matchup, a special ceremony was held to recognize KVA’s senior class, Blaire Boyd, Cheyenne Owen, Katelyn Balentine, Kaitlyn Jones, Anna Overby and Juliana Negron, all of whom had close family members in attendance for the evening’s festivities.

Once the ceremony concluded, the Spartans began their matchup with Ridgecroft by dominating them in the first set 25-8. But Ridgecroft provided a proper answer in the second set by taking advantage of several KVA mistakes to pull ahead 13-9.

The visitors’ momentum would be short-lived as KVA scored 14 unanswered points to win the second set 25-14. Ridgecroft kept the game close in the final set, but KVA’s consistency was too much for it to overcome, as the Spartans pulled away with a 25-11 win.

The victory over Ridgecroft puts KVA in a great position to claim its third consecutive NCISAA 1A championship, but Ellington said that her team still needs to make minor adjustments in a few areas as they prepare to face tough, postseason competition.

“I would definitely like to see some improvements on defense,” Ellington said. “That’s where I think we struggle the most. Not being ready for the ball to come back over is another thing we struggle with too, so we have to work on that as well, but other than that, we’re playing very good right now.”

KVA’s first matchup in the NCISAA 1A playoffs will take place at home Tuesday against Crossroads Christian.

The three were also virtually recognized at the Oct. 5 Granville County school board meeting.

All three harbor vision and passion, as indicated in their correspondence with Dispatch staff.

Tusa, who is the Principal of the Year for the first time, said in an email that it’s an “absolute honor” to be nominated by her colleagues.

“I have been so fortunate to spend all 13 of my years as principal in the same building — South Granville High School,” Tusa said in an email, which said response came from part of her POY speech given at Convocation. “The school has become my home and the staff has become family. When I decided to leave the classroom, a teacher friend cautioned that when I made the move I might lose the daily connections with students. I decided then and there that I would NOT lose the personal connection and after 13 years I feel that I have broadened those connections and deepened those relationships out of the classroom and into the entire high school experience. Over the past 13 years I have had the privilege of handing a high school diploma to over 1500 high school graduates.”

As for Holman, it’s her first year as Granville County’s Beginning Teacher of the Year. Holman said in an email that “it feels really nice to be recognized, especially at this time.”

Holman teaches at Granville Early College High School, which she referred to as an “amazing program” that helps students take community college courses while finishing their high school degrees.

“I am so lucky that I have been able to grow as a beginning teacher in this environment surrounded by other amazing teachers who lead by example,” Holman said in the email.

At Granville Early College High School, Holman teaches world history, English, and civics and economics. Holman said in all her classes she tries to inspire a love of history and literature while supplying “rigorous education” via “project based learning.”

In Holman’s classes students shall do “everything from” forging a virtual museum, to “simulating” passing a bill through congress, to acting out scenes from the famous Romeo and Juliet story. “My hope is that by allowing students to be the leaders in the classroom, they will learn more content, develop strong relationships and fall in love with history,” Holman said in the email.

She isn’t the only one providing opportunities for students.

In fact, what Holloway is proud of about being a teacher is being able to unlock what she described as the “God-given potential” as well as “breathing hope, dreams, and aspirations” into the lives of her students by “equipping them with the tools they need to have success in whatever they choose to do and being able to stand back and watch them do just that.” Holloway said in an email that it’s “simply the best.”

“While I am receiving the Principal of The Year recognition, really the acknowledgement should go to my Viking family — the teachers who give it their all every day...the support staff who embrace our children … the students and the parents who trust us to provide them with the best education possible,” Tusa said in the email, which this response also came from part of her POY speech given at Convocation. “They help me each day to grow and develop as a leader.”

She sat me down for a serious talk.

“This is Elizabeth City, not San Diego. You can’t wear those disco jeans to school.”

The “disco” jeans to which she referred were my favorite jeans with a satin rainbow on the back pocket. But they were much, much flashier than the Levis 501s that Kitty and every other kid in our class wore.

Today you can go to a retailer and easily purchase a pair to fit. If, like me, you have much longer legs than the norm (thanks to my 6-4, all-legs father), you can always go online and order a well-fitting pair on the interwebs.

One had to go big — 4 inches to be exact. Raw, 100% cotton denim is eminently shrinkable. Like a cashmere sweater washed in hot water and thrown into a dryer shrinkable. For 501s, the jeans weren’t pre-shrunk, the buyer was responsible for that part.

Just throw them into a washer on hot, and dry them until the desired size is reached, correct?

We were high-schoolers, with a love of ritual and all things complex and convoluted. Arcane procedure is a bonding mechanism.

And the procedure to shrink these Levi’s?

You had to fill the bathtub with the hottest tolerable water, don the duds, and get in. Then sit in the tub, wearing heavy, saturated pants. For an hour or so, long enough to dye both legs and tub indigo.

The purpose for this lunacy was for the jeans to draw up to perfectly fit one’s own body.

Of course, just like today’s so-called “miracle” hacks on Facebook and the like, the hype is different from reality. The jeans shrunk to size, but were no better fitting than the 501s purchased in one’s own size today.

As for shoes, Kitty informed me there was only one very specific type that was acceptable among our classmates.

They had to be white Nikes, with a blue swoosh. And canvas — not leather. Evidently, the leather version automatically declared the wearer was a parvenue. Upperclassmen were allowed to own an additional type of shoe: Sperry (Lord help the child who wore no-name knock-offs) Topsiders, or as we called them, “boat shoes”.

For shirts, there were a plethora of options — as long as it was a 100% cotton, button-down, Oxford cloth shirt or a polo.

And the variety didn’t end there. The button-downs could be in a rainbow of white, blue, pink (both boys and girls), and yellow. Either solid or striped — the mind boggles.

As for the polos, a Lacoste pique cotton was the ideal. But that little alligator came at a steep price — usually more than $30. And most parents balked at paying the price, which was enough for a family to eat out, see a movie and buy some Milk Duds and popcorn. Most kids only had a few, highly treasured Lacostes.

So, there was a concession to the realities of the economy.

If there wasn’t enough bank for a reptile to decorate your chest, a tiny little tiger was acceptable. The Le Tigre shirt, which sold for about $12 was, in every other respect, identical.

But regardless of the animal on your shirt; collars popped, please. It didn’t become the move of the obnoxious rich kid until Tom Cruise did it in “Risky Business.” Add that pop to a pair of Ray-Ban Wayfarers and you had the rich, entitled villain of every single teen movie until 1990.

Thanks for your time.