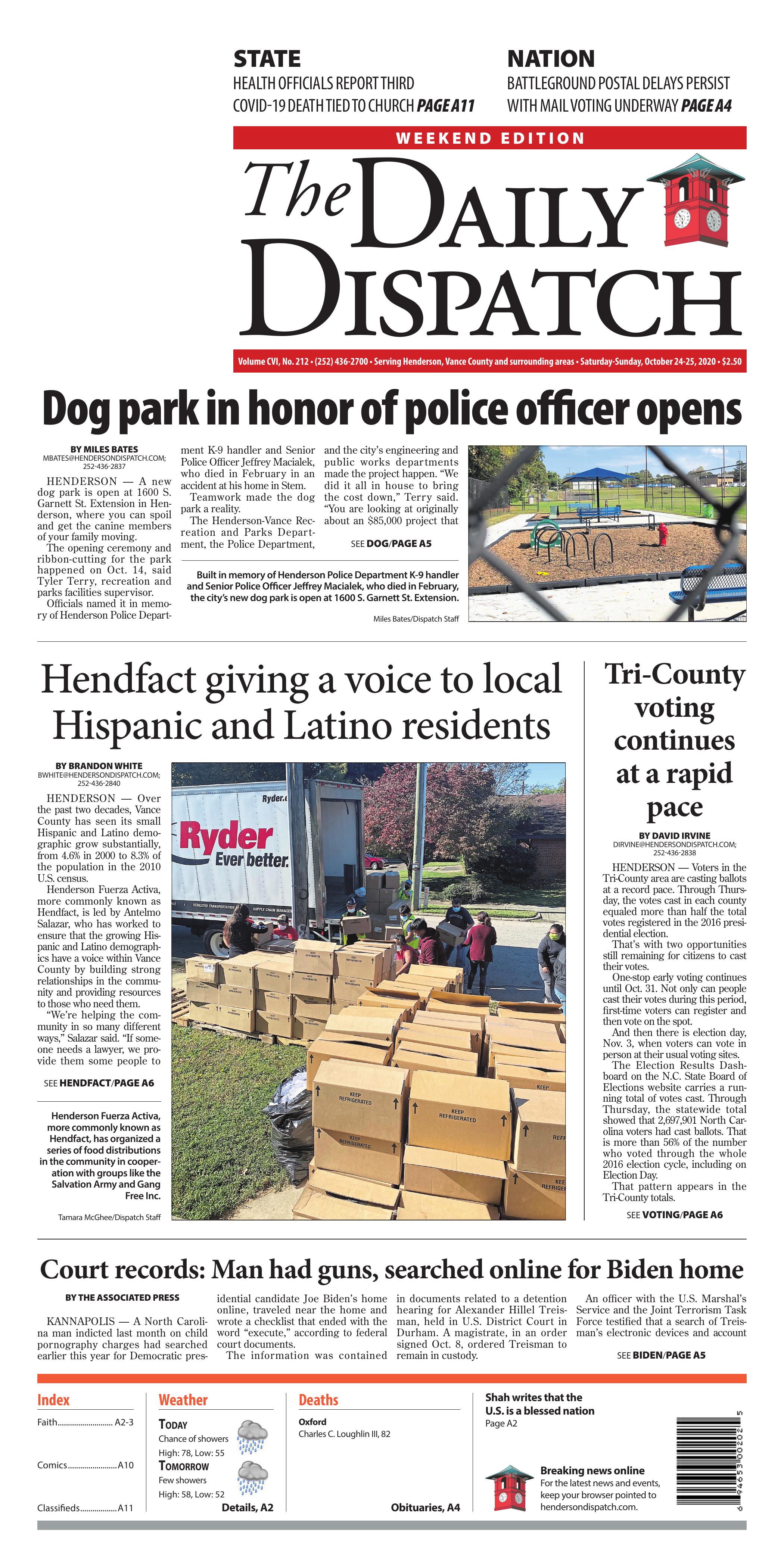 HENDERSON — A new dog park is open at 1600 S. Garnett St. Extension in Henderson, where you can spoil and get the canine members of your family moving.

The opening ceremony and ribbon-cutting for the park happened on Oct. 14, said Tyler Terry, recreation and parks facilities supervisor.

Officials named it in memory of Henderson Police Department K-9 handler and Senior Police Officer Jeffrey Macialek, who died in February in an accident at his home in Stem.

Teamwork made the dog park a reality.

The Henderson-Vance Recreation and Parks Department, the Police Department, and the city’s engineering and public works departments made the project happen. “We did it all in house to bring the cost down,” Terry said. “You are looking at originally about an $85,000 project that we turned into about a $25,000 project.”

The city already had a similar facility, Pawesome Park at Fox Pond Park.

But “we felt the community needed another dog park in a different location, maybe more centralized and that was accessible to all,” Terry said.

Tara Goolsby, recreation and parks program superintendent, added that accessible also means accessible for folks with disabilities, in compliance with the federal Americans with Disabilities Act.

Additionally, your fur babies can have quite the time at the dog park considering its features.

Henderson Fuerza Activa, more commonly known as Hendfact, has organized a series of food distributions in the community in cooperation with groups like the Salvation Army and Gang Free Inc.

HENDERSON — Over the past two decades, Vance County has seen its small Hispanic and Latino demographic grow substantially, from 4.6% in 2000 to 8.3% of the population in the 2010 U.S. census.

Henderson Fuerza Activa, more commonly known as Hendfact, is led by Antelmo Salazar, who has worked to ensure that the growing Hispanic and Latino demographics have a voice within Vance County by building strong relationships in the community and providing resources to those who need them.

“We’re helping the community in so many different ways,” Salazar said. “If someone needs a lawyer, we provide them some people to contact. We also want to combat racism against the Latino community by speaking up for others and encouraging people to not be scared.”

Founded in 2009, Salazar witnessed the struggles that the Hispanic and Latinos in Henderson faced on a daily basis and how they were unable to turn to many people for help. That motivated him to start Hendfact to help address those needs and problems.

Although Hispanics and Lations are two of the fastest-growing populations in the United States, they are more likely to hold low-paying jobs and are more likely to live in neighborhoods with lower homeownership rates and higher poverty rates than Caucasians, according to a 2009 report by the Pew Research Center.

That same report also said that Hispanics and Latinos face multiple barriers when it comes to accessing quality health care and are disproportionately impacted in the United States criminal justice system, with incarceration rates doubling those of Caucasians.

Although poverty for Hispanics and Latinos hit an all-time low of 15.7%, according to a U.S. Census Bureau report in September, other challenges have surfaced, including an increase in the number of victims in anti-Hispanic/Latino hate crimes.

While Salazar has been disappointed by some of the challenges and recent hostility that Hispanics and Latinos have faced all around the United States, he believes Hendfact has helped his community take gradual steps towards local representation by engaging in talks with many prominent figures around the city and county.

“Things are a little bit easier now because we’ve had conversations and built relationships [in Vance County],” Salazar said. “We’ve done this with the court, with the mayor, the police department and the sheriff’s department. We need inclusion in this community and having those relationships really help[s] us out.”

In recent months, Hendfact has worked to ensure that Hispanics and Latinos are taken care of during the COVID-19 pandemic. Salazar and his staff have distributed masks to local residents and joined with organizations like the Salvation Army and Gang Free Inc. to hand out food.

Hendfact also took part in protests against systemic racism during the summer following the deaths of George Floyd and Breonna Taylor, but Salazar said that the decision was also made to remember Vanessa Guillen and Enrique Roman-Martinez, who both died under suspicious circumstances while serving in the military.

As for representation, Hendfact has organized several events that encouraged Hispanic and Latino residents to take part in the 2020 U.S. Census and register to vote for the upcoming elections, all of which Salazar believes were successful with their mission to get those demographics more influence in Henderson and Vance County.

He would like to see Hendfact obtain formal nonprofit status in the near future and take on a more expanded role in Henderson. But Salazar said he’s proud of what he and his staff have been able to accomplish during the last decade and hopes Hendfact will continue to have a positive effect on the lives of local Hispanic and Latino residents.

“Hendfact is a very important place for the [Hispanic] community,” Salazar said. “Many people have come through this door telling us that they have a problem and have asked us to help. Sometimes I have the answer, sometimes I don’t, but so many people know about what we do now and we are here to help in any way that we can.”

HENDERSON — Voters in the Tri-County area are casting ballots at a record pace. Through Thursday, the votes cast in each county equaled more than half the total votes registered in the 2016 presidential election.

That’s with two opportunities still remaining for citizens to cast their votes.

One-stop early voting continues until Oct. 31. Not only can people cast their votes during this period, first-time voters can register and then vote on the spot.

And then there is election day, Nov. 3, when voters can vote in person at their usual voting sites.

The Election Results Dashboard on the N.C. State Board of Elections website carries a running total of votes cast. Through Thursday, the statewide total showed that 2,697,901 North Carolina voters had cast ballots. That is more than 56% of the number who voted through the whole 2016 election cycle, including on Election Day.

That pattern appears in the Tri-County totals.

In Vance County, 10,043 voters had cast ballots through Thursday, almost exactly half the total voter turnout in 2016. Absentee ballots accounted for 1,839 of those votes and one-stop early voting for 8,204.

Board of Elections Director Faye Gill said the stream of voters has been “steady.” She is not aware of any issues affecting voters access to the ballot.

In Granville County, Board of Elections Director Tonya Burnette said, “We’re having a really, really good turnout.” A total of 14,969 voters had voted through Thursday, with 3,384 casting mail-in ballots and 11,582 voting in person at early voting sites.

The total vote count in Granville so far is about 55% of the total 2016 vote.

In Warren County, the Board of Elections through Thursday had received 1,083 mail-in absentee ballots and had recorded 4,218 votes at one-stop early voting sites for a total of 5,301. That total equals 53.6% of the total vote in 2016.

Election Technician Tom Vandiford said the volume of voters has been heavier than in the past, but because it is spread over three sites, lines have moved quickly. The one exception was on the first day of one-stop voting, when there were some short delays.

In Granville County, early voting is taking place at: