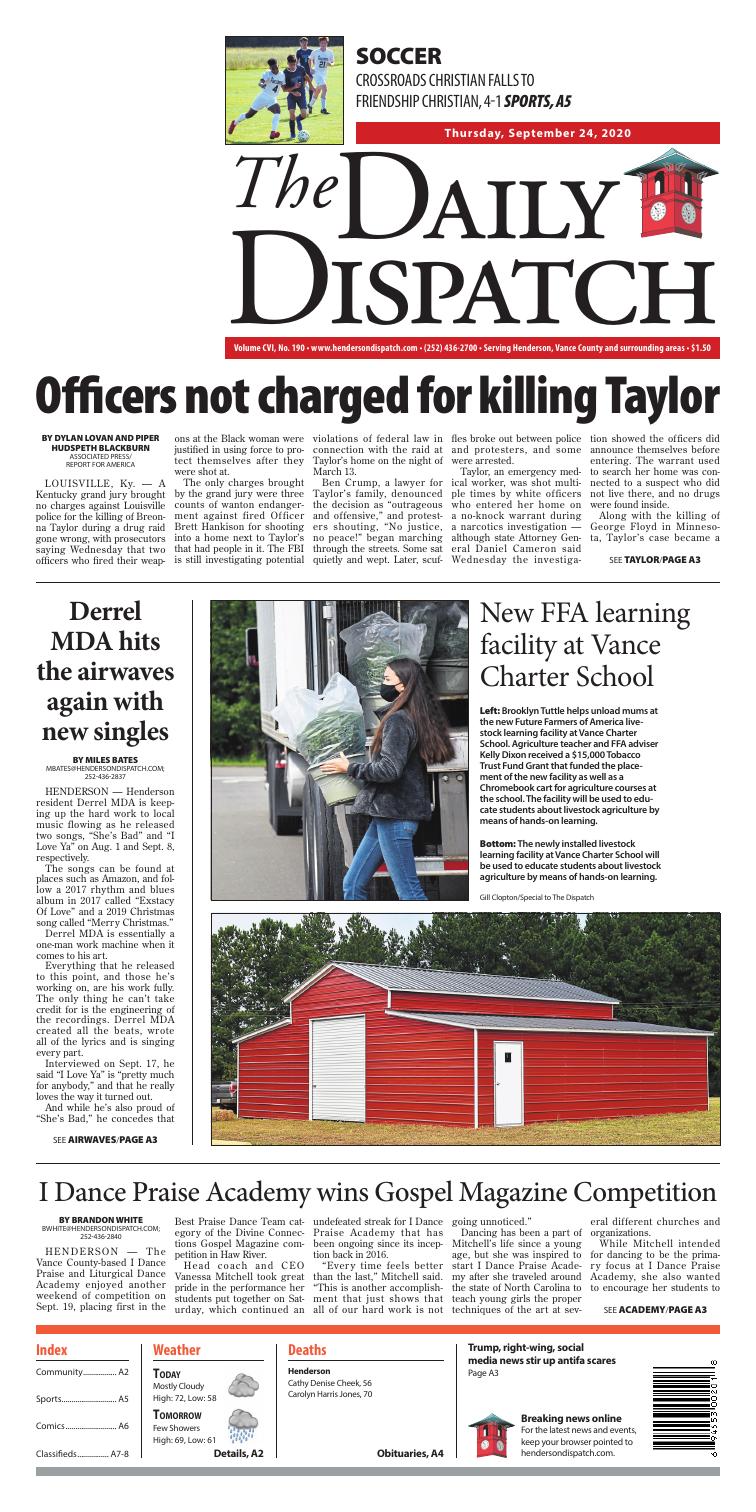 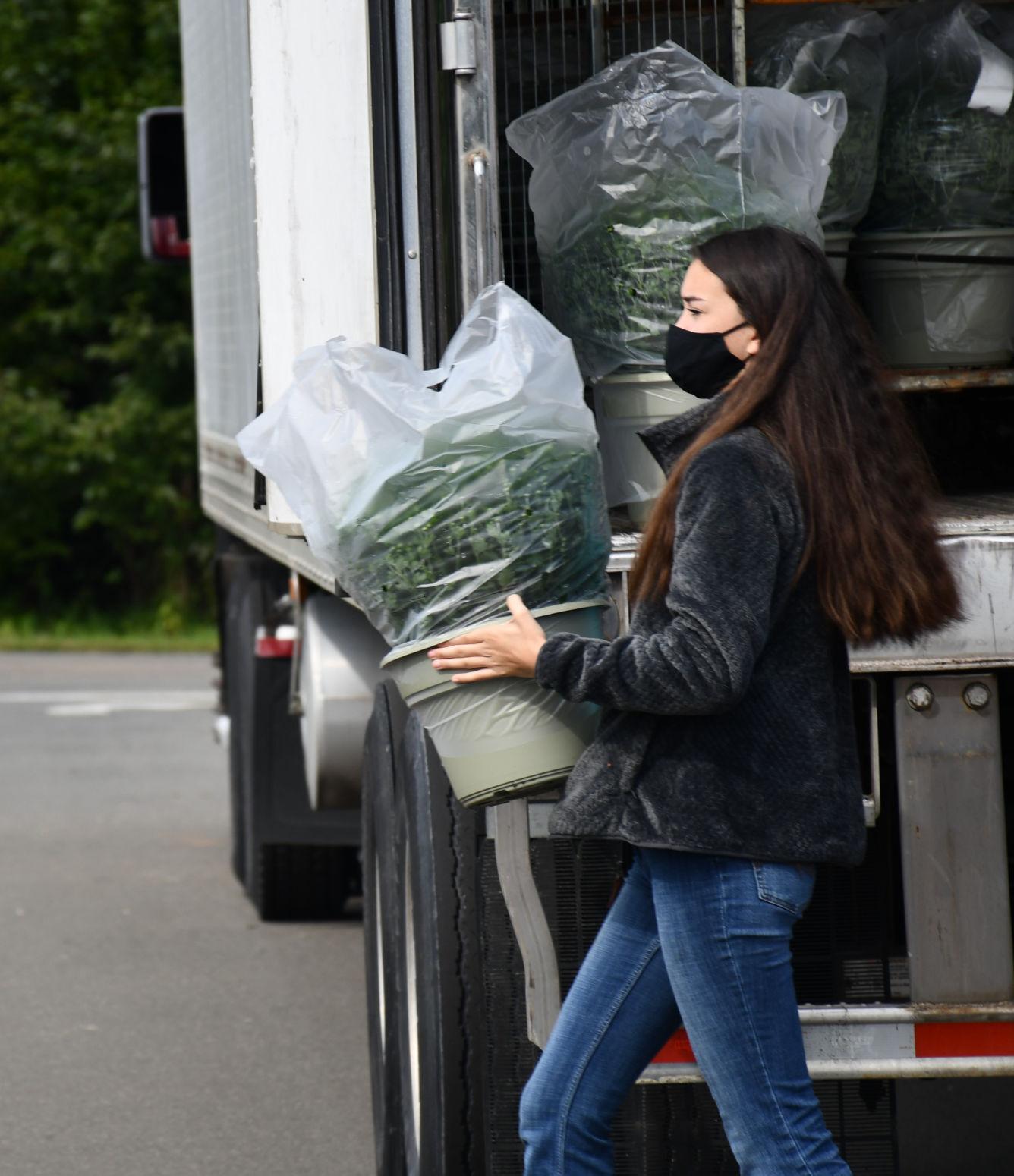 Brooklyn Tuttle helps unload mums at the new Future Farmers of America livestock learning facility at Vance Charter School. Agriculture teacher and FFA adviser Kelly Dixon received a $15,000 Tobacco Trust Fund Grant that funded the placement of the new facility as well as a Chromebook cart for agriculture courses at the school. The facility will be used to educate students about livestock agriculture by means of hands-on learning.

The newly installed livestock learning facility at Vance Charter School will be used to educate students about livestock agriculture by means of hands-on learning.

Head coach and CEO Vanessa Mitchell took great pride in the performance her students put together on Saturday, which continued an undefeated streak for I Dance Praise Academy that has been ongoing since its inception back in 2016.

“Every time feels better than the last,” Mitchell said. “This is another accomplishment that just shows that all of our hard work is not going unnoticed.”

Dancing has been a part of Mitchell’s life since a young age, but she was inspired to start I Dance Praise Academy after she traveled around the state of North Carolina to teach young girls the proper techniques of the art at several different churches and organizations.

While Mitchell intended for dancing to be the primary focus at I Dance Praise Academy, she also wanted to encourage her students to get involved within the community by setting up events that included food donations for the hungry and toy drives during the Christmas season.

In its first four years of existence, Mitchell has seen enrollment grow from the 15 students who signed up during the first year, as the academy now has about 100 girls taking part in classes and competitions with plenty of room for more participants.

Mitchell said that the large class size at I Dance Praise Academy gives her plenty of options when the girls participate in competitions, but she said students’ great work ethic and close bonds have been crucial parts of the team’s overall success.

“Prayer, faith and dedication are the keys,” Mitchell said. “These girls are so dedicated and they love what they do. All of them are great listeners and they never give me a hard time during rehearsal. We might have a couple of laughs, but they know to take everything seriously and to pray for and help one another. We call ourselves a sisterhood and we uplift one another.”

I Dance Praise Academy’s consistency has earned them opportunities to gain more national recognition, which has involved dancing behind gospel singer Kelontae Gavin and participating as feature dancers of The Love Tour on CW22.

Mitchell is focused on welcoming more students and organizing events coming up in the next few weeks now that COVID-19 restrictions are being loosened across the state.

“We have open enrollment right now, but we’re also preparing for our benefit concert,” Mitchell said. “We can’t have it inside because of COVID-19, so we’re going to be at the [Raleigh Road] Outdoor Theatre on Oct. 3 at noon. The girls are going to present all of their dances and they’ll level up, kind of like martial arts. Everyone starts as a white belt dancer with the ultimate goal being to become a black belt praise dancer.”

I Dance Praise Academy’s next competition will be the Essence of Praise competition in Durham during October, which they enter as the defending champions.

HENDERSON — Henderson resident Derrel MDA is keeping up the hard work to local music flowing as he released two songs, “She’s Bad” and “I Love Ya” on Aug. 1 and Sept. 8, respectively.

The songs can be found at places such as Amazon, and follow a 2017 rhythm and blues album in 2017 called “Exstacy Of Love” and a 2019 Christmas song called “Merry Christmas.”

Derrel MDA is essentially a one-man work machine when it comes to his art.

Everything that he released to this point, and those he’s working on, are his work fully. The only thing he can’t take credit for is the engineering of the recordings. Derrel MDA created all the beats, wrote all of the lyrics and is singing every part.

Interviewed on Sept. 17, he said “I Love Ya” is “pretty much for anybody,” and that he really loves the way it turned out.

And while he’s also proud of “She’s Bad,” he concedes that “some of the people kind of wasn’t really feeling the song” because of “some of the words that I put in the song.”

“When I talked about the Africans, the Dominican Republic and Jamaica, some of them said that ‘that’s not our culture’ so they didn’t feel like the song related to them, but other than that, they said that the beat and the other lyrics and just the way that I just composed the song, they loved it,” Derrel MDA said. “So I still love it all the way around because it is my work so I love both of the songs. That’s my outcome of making both of them. I love them.”

He also said he’s working on new material. One song is finished, though not yet released.

It deals with timely subjects, and is dedicated to George Floyd.

“It has a really, really positive meaning to it,” he said. “I talk about white people and black people getting along in there. I talk about Martin Luther King, some of the speeches that he made. Then I talk about George Floyd, some of his last moments of what happened before he actually died, and just talk about racism.”

Derrel MDA is working on a gospel song, too. He finished it mid-month and it’s in the process of being mixed and mastered right now.

Another song is a work in progress, needing a trip back to the studio to complete, and yet another has also just been finished. In all, Derrel MDA has probably five to six songs that he intends to release probably within the next three months. 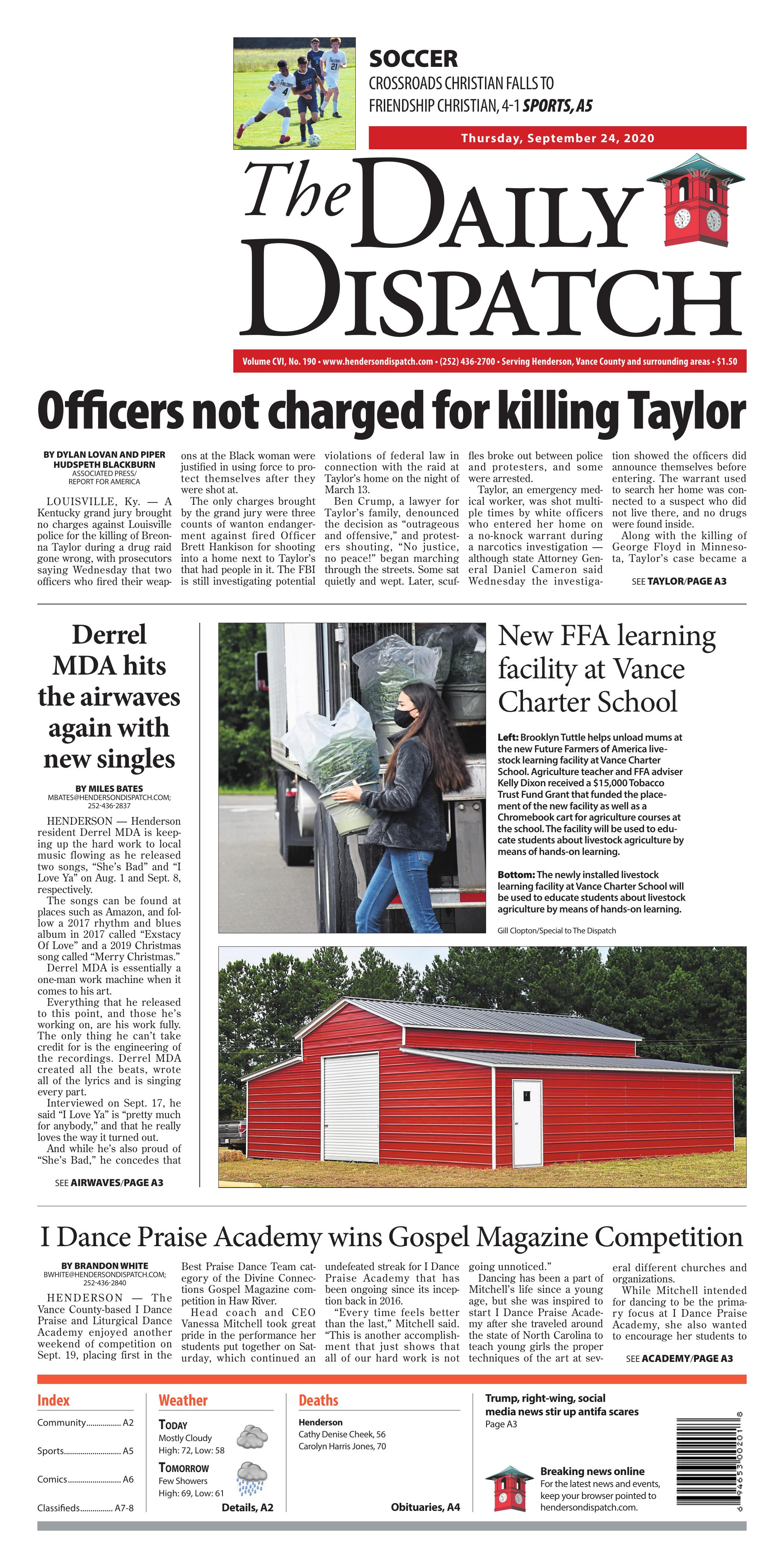