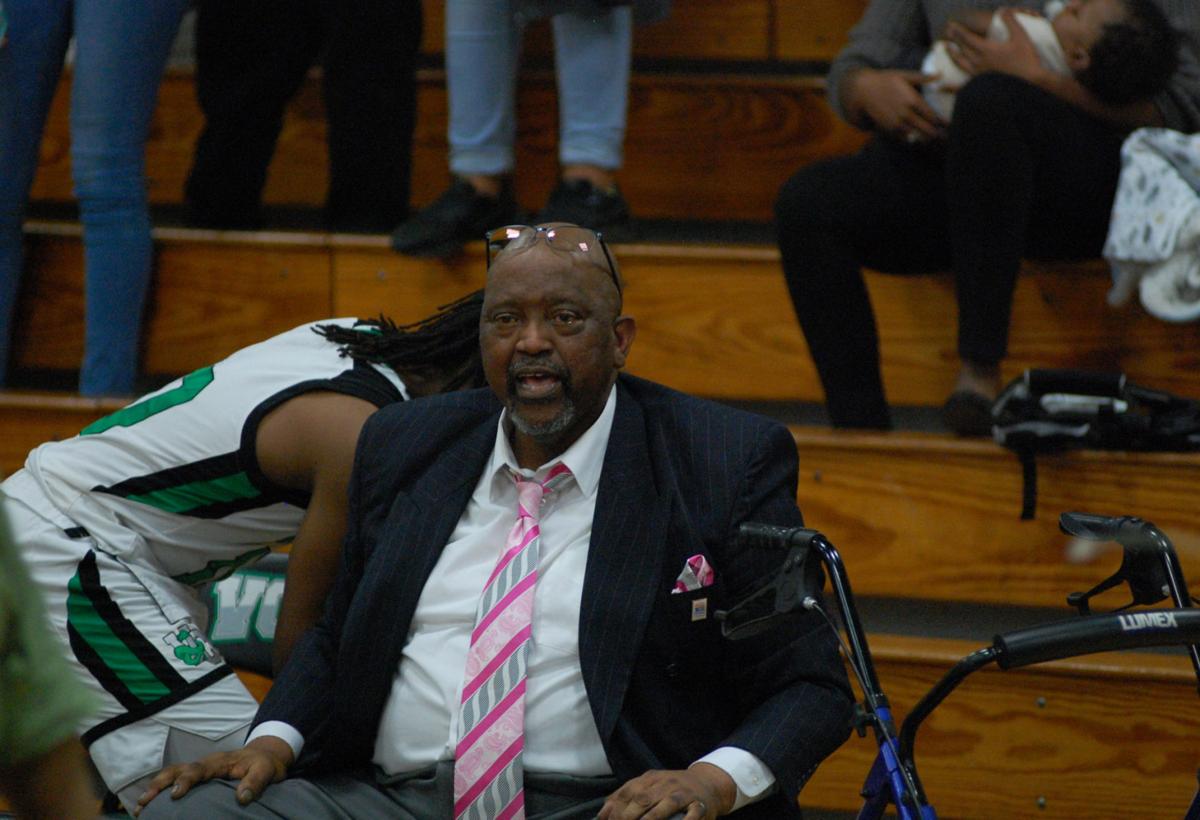 Former Vance County men’s basketball coach Wilton Baskett looks on as his team puts the finishing touches on a 53-51 victory over East Chapel Hill on Feb. 4, 2020, which was the 400th of his career. Baskett passed away on Saturday at the age of 62.

Wilton Baskett got his start in basketball during the 1970s as a member of the Vance Senior High basketball program, where he learned about the sport from coach Joe Stepusin, who passed away in September. Baskett ended his head coaching career with 402 victories, one short of Stepusin’s total.

Former Vance County men’s basketball coach Wilton Baskett looks on as his team puts the finishing touches on a 53-51 victory over East Chapel Hill on Feb. 4, 2020, which was the 400th of his career. Baskett passed away on Saturday at the age of 62.

Wilton Baskett got his start in basketball during the 1970s as a member of the Vance Senior High basketball program, where he learned about the sport from coach Joe Stepusin, who passed away in September. Baskett ended his head coaching career with 402 victories, one short of Stepusin’s total.

Vance County men’s basketball coach Chad Wilson was stunned to hear about the sudden passing of his mentor and said that he would not be in his current position without the guidance and encouragement Baskett offered when he worked with him as a player and an assistant coach.

“Coach Baskett really shaped a lot of who I am not just as a coach, but as a man,” Wilson said. “He taught me how to carry myself and how to just be a good person in society.”

Wilson first met Baskett in 2001 when he attended a summer camp at Catawba College to prepare for his freshman year at Northern Vance. Wilson knew immediately that Baskett expected the most out of his students, but he was ready to commit himself to basketball by carefully listening to his advice.

The next four years for Wilson would see him get tested both physically and mentally by Baskett in practice and in games, but he quickly developed a deep respect for Baskett’s leadership style and established a close friendship with his coach that extended long after his playing career had ended.

“It was all about preparation,” Wilson said. “[Baskett] prepared me to play at the college level, but he also prepared me for what life was like. He showed us tough love and discipline, but that was to make sure we were all ready for something bigger, and I was fortunate to come back years later and coach alongside him to get more of that wisdom.”

Wilson said that Baskett’s tutelage taught him all of the key characteristics needed for a person to achieve success, which had already become a common theme with Baskett’s programs after he took over head coaching duties at Northern Vance in the 1990s.

David Hicks, who was the athletic director at Northern Vance from 1995 until 2013, had known Baskett since his time as a student and basketball player at Vance Senior High and believed that the dedication he displayed during the 1970s would make him a great coach and leader at the school.

While the two did not always agree on every single issue, Hicks put his full trust in Baskett when it came to basketball, who proceeded to turn Northern Vance’s team into a program that valued efficiency on and off the court and motivated players to pursue better lives in college, whether that involved basketball or a different field.

“I knew that with all of the coaches I was responsible for, I never worried about the basketball program,” Hicks said. “Wilton was very detail-oriented and always prepared. If something came up pertaining to a parent complaint or a player not getting enough playing time, Wilton would handle it. I was always very comfortable with what Wilton was doing with basketball.”

Hicks said that it was difficult to catch Baskett at a time when basketball was not on his mind, but he affirmed that Baskett used his passion for the game to put his players into a proper developmental environment that ensured they would be taken care of after they graduated from Northern Vance.

“He ran a tight ship in practice and his games were very structured,” Hicks said. “When he wasn’t teaching, he was studying film. We would often both be in the gym at the time teaching a PE class, and over on the side, he would run a couple of tapes and mail them off to coaches. He got some kids into school to play ball, which is something I don’t think the average coach would have been able to do.”

Baskett maintained this style of coaching at Northern Vance all the way through the 2010s even as high school basketball began to change around North Carolina, with many programs opting to have their players embrace a positionless, up-tempo system as opposed to a traditional gameplan.

During the final years of Northern Vance, Jeff Tate accepted a role as the school’s athletic director and was impressed to see that Baskett still possessed the same energy and passion about basketball after he previously worked alongside him in the 1990s and early 2000s while leading Northern Vance’s baseball team and assisting the varsity football program.

Tate praised Baskett’s ability to keep Northern Vance competitive in basketball despite all of the changes that were occurring during the decade, adding that the amount of knowledge Baskett possessed about the sport is a quality that will be missed by current and future generations of athletes in Vance County.

“Wilton was a great disciplinarian,” Tate said. “He did things his way and did such a great job building that program. He loved the kids and he loved Vance County. We used to talk all the time about the history of sports in Vance County, and he told me one time that he wished he could go back to the mid-90s to around 2005 when sports were still strong at Northern Vance.”

Tate considers himself honored to watch Baskett coach numerous great games during his tenure at Northern Vance from 2014-2017, which were often closely-contested matchups with local rivals like Warren County, J.F. Webb and a Southern Vance program that was led by current Wake Forest High School basketball coach Greg Ackles.

When Ackles first took the head coaching position at Southern Vance, he knew that the rivalry matchups with Northern Vance would be intense, but he initially found himself stunned at how efficient Northern Vance was despite never straying from a flex offense and 1-3-1 defense.

“Coaching against [Baskett] was fun, but it was frustrating because you knew exactly what was about to happen, but his players ran it so well and so much that you could be over prepared and they would still find a way to run it and get baskets,” Ackles said. “My first impression was wondering why he only ran one play on offense and defense, but you could tell that he drilled those plays into his players.”

Southern Vance ended up finishing with a 4-6 record against Northern Vance while Ackles was the head coach, but he said that the most heartbreaking of those defeats came on Feb. 9, 2018, which proved to be the final meeting between the two schools before they were consolidated into Vance County High School.

After battling hard all evening, Baskett and Northern Vance took advantage of foul trouble that Southern Vance had accumulated during the game by having senior Malik Glasco navigate his way through his opponent’s defense to score the game-winning shot that gave Northern Vance an 88-86 victory.

“I was heated in the moment because of the way we lost, but I told my guys that was probably the best game I had been a part of,” Ackles said. “It was a good game to watch and it was fun coaching in it even though we lost, but sometimes you just have to sit back and appreciate good basketball.”

Tate said that great games like the final matchup between Northern and Southern Vance will always be a small part of Baskett’s story, as he believes that Baskett will be remembered for his love towards his players and for being a great representative of Vance County up until the end of his life.

“Wilton had a chance to leave several times,” Tate said. “He had offers from different schools throughout the years, but at the end of the day, he always came back and said that he wanted to keep improving things [at Northern Vance] because this was his home. If you do a great job, people will want you, but Wilton always decided to stay here.”

Having been named as Baskett’s replacement at Vance County in August, Wilson believes he is ready to lead the team into the postseason for their third consecutive year, but he said that game days will feel unusual for a while knowing that Baskett is no longer around.

“It’s a great honor,” Wilson said. “I hate that he’s gone because I was waiting somewhere down the line for him to be there and watch a game at some point even though people have to be away from the games right now. I just wish I could have seen him one more time.”

As with Hicks and Tate, Wilson will always remember Baskett’s love for others and intends to honor his legacy by encouraging his players to achieve their maximum potential through hard work and care.