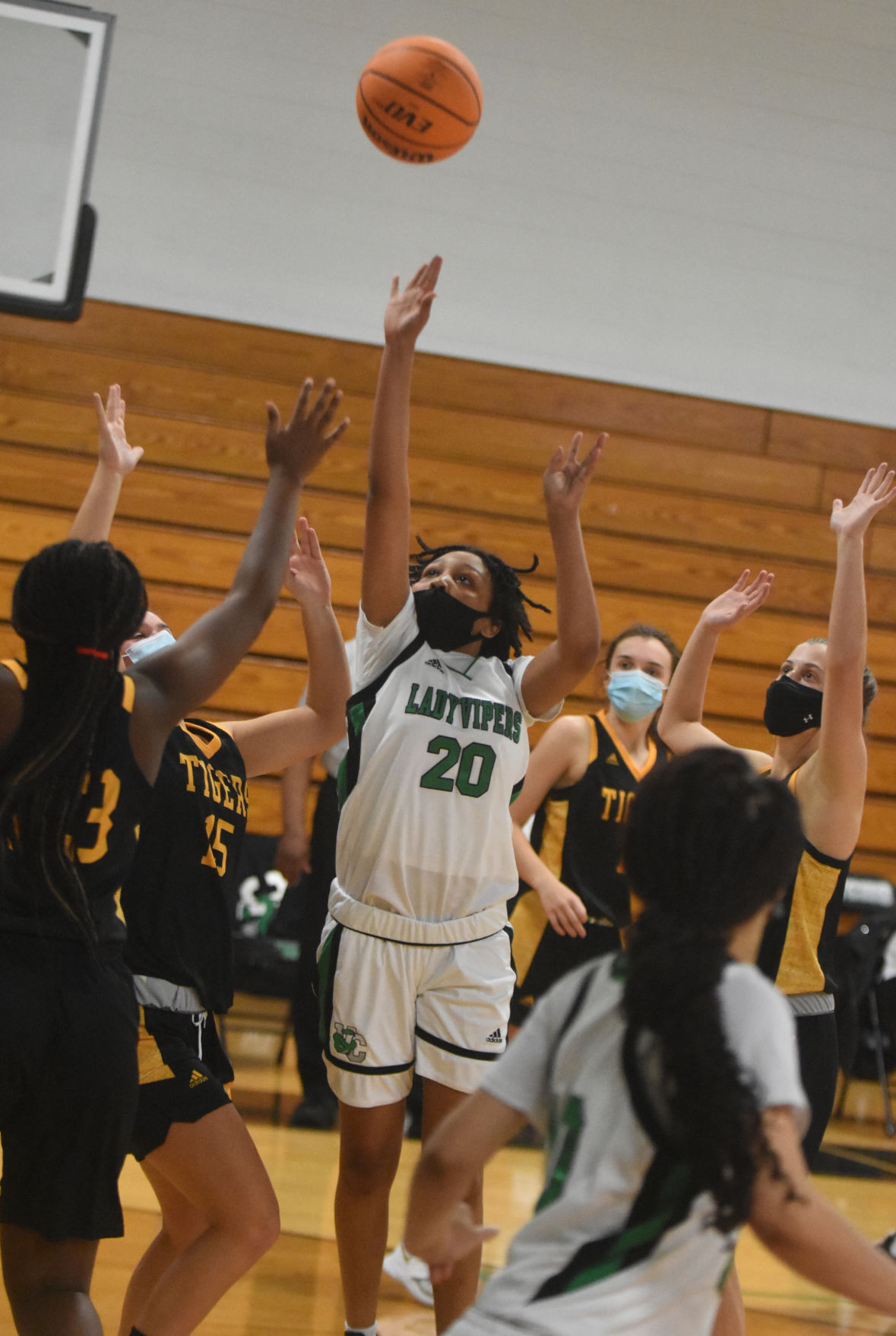 Vance County women’s basketball player Sarah Baldwin (20) puts up a shot against several Chapel Hill defenders during her team’s 54-22 loss to open the year on Jan. 5. COVID-19 issues sidelined the team directly afterwards and they would not play again until Feb. 5. 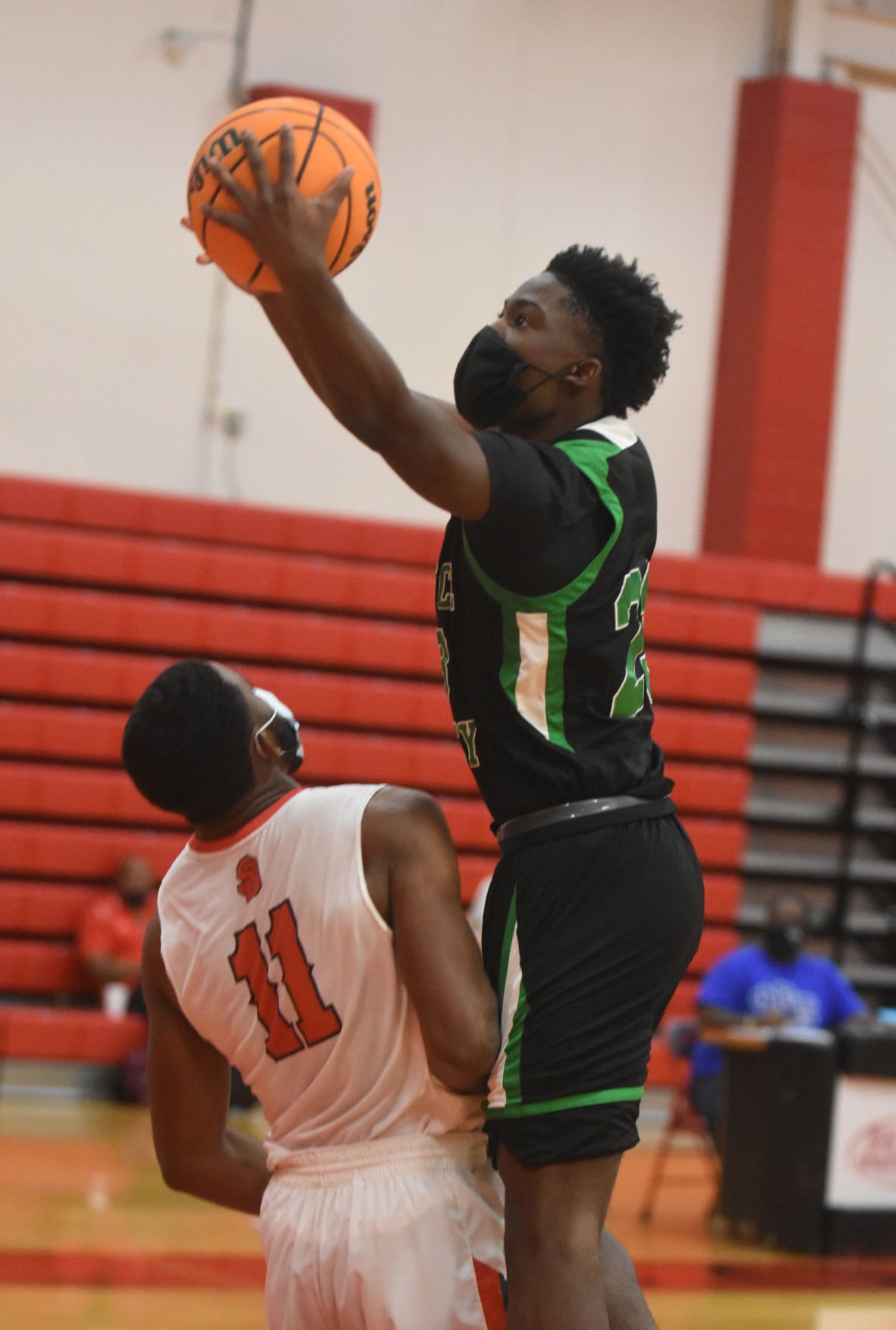 Vance County men's basketball player Adrian Durham-Thomas (center) drives to the rim against a Southern Durham defender during his team's 73-66 loss on Feb. 12. The Vance County men only played five games this year because of COVID-19 issues and finished with a 1-4 record.

Vance County women’s basketball player Sarah Baldwin (20) puts up a shot against several Chapel Hill defenders during her team’s 54-22 loss to open the year on Jan. 5. COVID-19 issues sidelined the team directly afterwards and they would not play again until Feb. 5.

Vance County men's basketball player Adrian Durham-Thomas (center) drives to the rim against a Southern Durham defender during his team's 73-66 loss on Feb. 12. The Vance County men only played five games this year because of COVID-19 issues and finished with a 1-4 record.

HENDERSON — The 2020-21 season proved to be a struggle for both Vance County varsity basketball programs, as COVID-19 issues limited the teams to just 11 games between them.

Athletic director Joe Sharrow did everything possible to get as many games in as possible while simultaneously keeping his players and staff safe from COVID-19, and praised everyone on both teams for staying resilient and composed despite the issues.

“I’m proud of both teams,” Sharrow said. “I’m proud that we were able to provide them an opportunity despite the issues that we dealt with. They battle through adversity well and I can’t be more proud of what they accomplished.”

An abbreviated basketball season for Vance County was set to begin Jan. 5 with both teams hosting Chapel Hill, but only the women ended up playing after COVID-19 issues forced the men’s team to postpone their home opener.

In front of a near-silent gymnasium due to COVID-19 restrictions, the Vance County women opened the year with a disappointing 54-22 loss to Chapel Hill, but head coach Sheila Gill-Hargrove, who had taken over for Sheila Kearney during the offseason, was optimistic that the mistakes that plagued her team that evening would get fixed after a few more games.

Unfortunately for Gill-Hargrove and neither the women’s or men’s team would set foot on the court for another game until Feb. 5, as Vance County ended up pausing all basketball activities at the school following a persistent number of COVID-19 cases.

The Vance County women were able to come out of the pandemic with momentum by winning three of their last five games, but their senior night matchup against Northwood set for Feb. 19 ended up being called off due to poor weather conditions and eliminated any chance of Vance County reaching the NCHSAA 3A Playoffs.

“This was really disappointing for my seniors,” Gill-Hargrove said. “They’ve been dedicated for four years and played their hearts out, but they didn’t even get to play their senior night game and weren’t able to celebrate all of their accomplishments. It was really heartbreaking because they were all looking forward to that game.”

Gill-Hargrove added that the 30 days away from basketball created long-term effects that she knew would be difficult to overcome because of the shorter schedule. Six of the 15 members on the roster to start the year ended up leaving the basketball team due to job commitments they acquired over the break or COVID-19 concerns.

Other issues that Gill-Hargrove encountered during her first year included complaints about wearing masks during practices and games, along with organizing rides to get her players to the school. Normal team bonding events such as the Christmas parade and post-game meals were also canceled or altered to prevent the spread of the virus.

Gill-Hargrove hopes to never experience anything similar to the 2020-21 season through her remaining years as a head coach, but she was thankful for Sharrow and everyone else at Vance County who worked to ensure that the varsity basketball players would be able to play in a manner that emphasized safety over everything else.

“They got the chance to do something,” Gill-Hargrove said. “If you love the sport, you’ll take every little thing you can get out of it. I had several discussions with my seniors and I just told them to be grateful for the years they ended up having because at one point there was a chance we wouldn’t even have a season.”

For Sharrow, the season provided challenges from not only a logistical standpoint due to the COVID-19 issues, but also financially, as capacity limits implemented by the N.C. High School Athletic Association and N.C. governor Roy Cooper meant that Vance County and other schools were unable to bring in money that typically comes from attendance and concessions.

Despite this, Sharrow said that he was unwilling to take part in any action that directly jeopardized the safety of Vance County students and staff, and believes that the protocols that were put in place helped prevent the COVID-19 issues at the school from festering into something worse.

“Everything is different right now,” Sharrow said. “We’re trying to play contact sports during a global pandemic, and when things are abnormal, we have to have abnormal solutions, and I believe Vance County Schools has done as well as anybody with that. I’m very proud of the guidelines and protocols we have to keep athletes safe, which we’ve been doing to the best of our ability.”

Sharrow does not know what to expect out of the school’s varsity programs with the two teams graduating a combined total of 13 seniors, but he is optimistic that the underclassmen will step up to fill leadership roles on both offense and defense in front of the normal exuberant home crowds.

“It’s hard to say where the basketball teams stand since we didn’t get much of a season in this year,” Sharrow said. “We saw some good things out of our younger kids and we’re excited to have them back. Vance County is always going to be a contender in basketball, and I do believe that if things are more normal next year, then our success will be a little more normal as well.”

Sharrow intends to honor the senior class of basketball players during the football team’s senior night against Northwood on April 1. Among them will be Yumyah Hargrove, who broke the 1,000-point barrier in her final game for Vance County against Cedar Ridge on Feb. 16, which helped her team win 67-27.