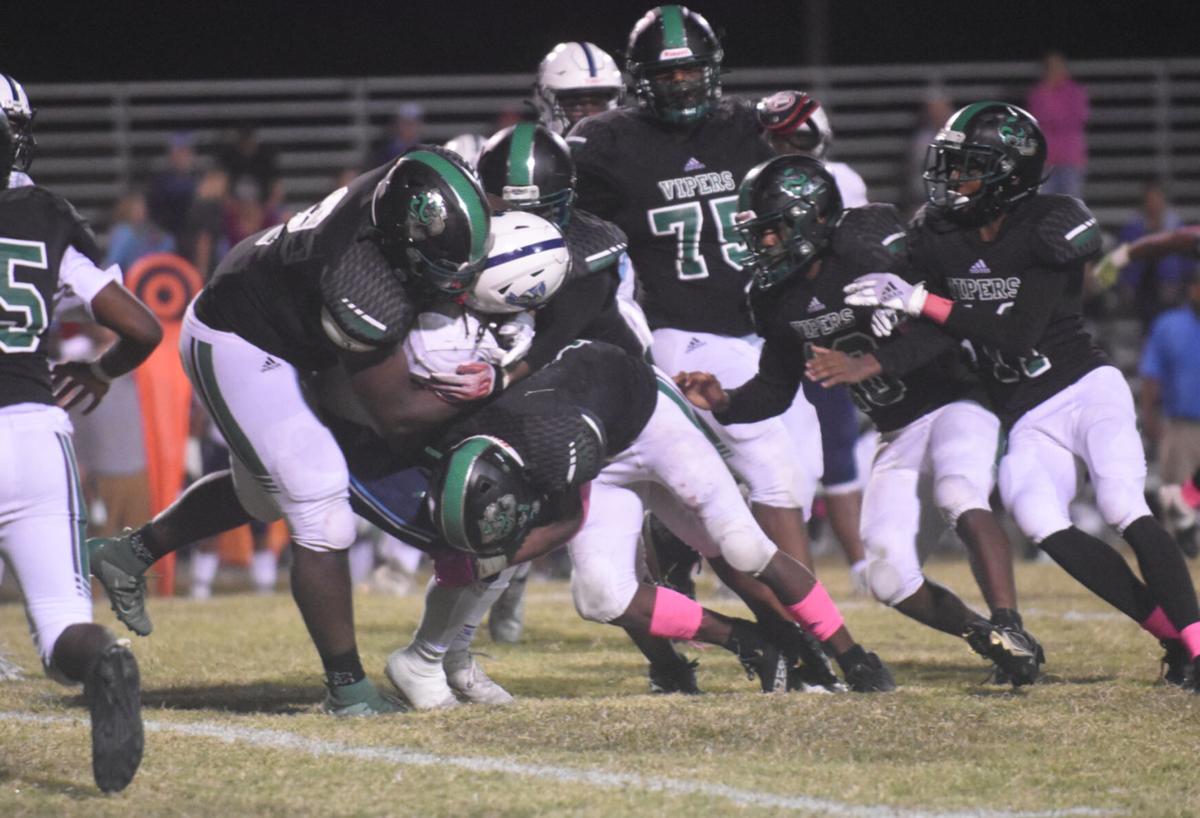 Above: Several Vance County defenders that include Omari Allen (75), Isman Alston (center right) and Jayson Otts (right) wrap up a South Granville running back during their team’s 18-12 victory at home on Friday evening, which improved Vance County’s record to 5-1 on the year. Below: Vance County running back Carl Stephens III (center) evades several South Granville tacklers and breaks into the end zone during his team’s 18-12 victory on Friday night. 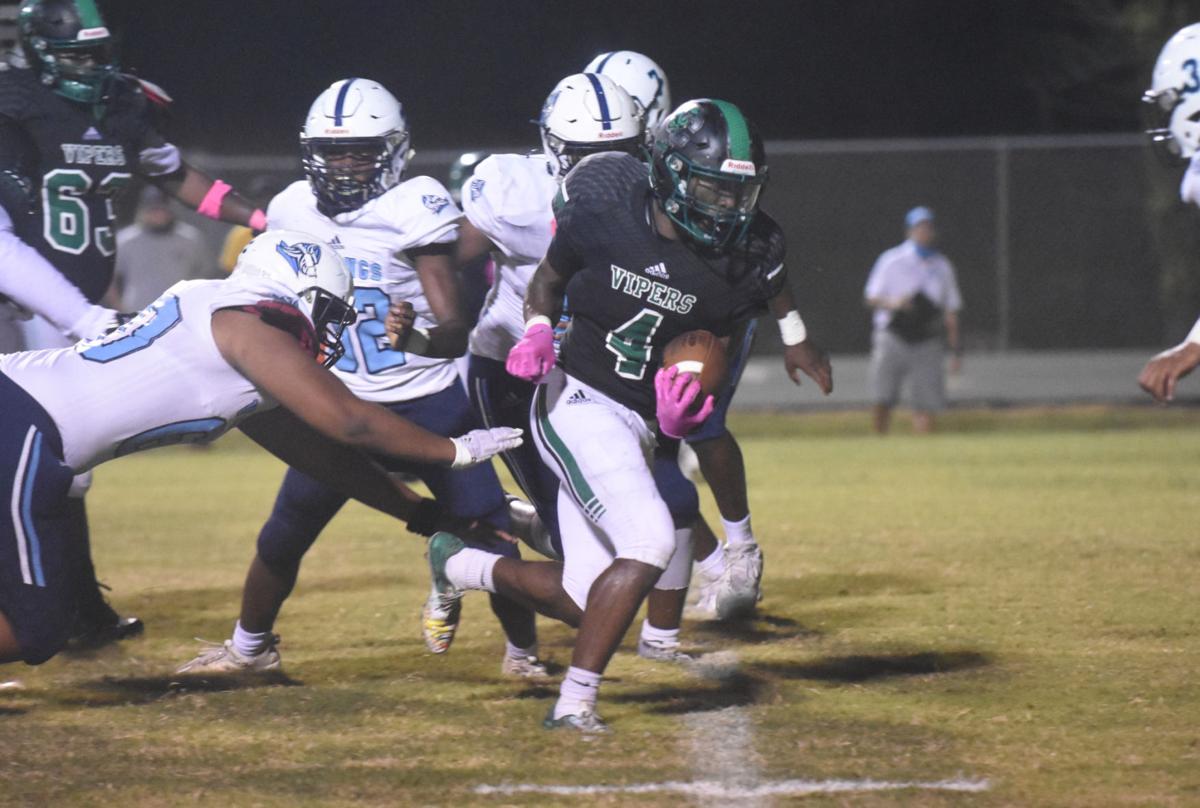 Above: Several Vance County defenders that include Omari Allen (75), Isman Alston (center right) and Jayson Otts (right) wrap up a South Granville running back during their team’s 18-12 victory at home on Friday evening, which improved Vance County’s record to 5-1 on the year. Below: Vance County running back Carl Stephens III (center) evades several South Granville tacklers and breaks into the end zone during his team’s 18-12 victory on Friday night.

HENDERSON — Another home matchup for the Vance County football team came down to the closing seconds on Friday evening.

Having pulled ahead 18-12 in a defensive slugfest with South Granville, Vance County had to successfully withstand one last offensive push from their in-conference rival during the final minute to win their fourth consecutive game and improve to 5-1 on the season.

Head coach Wilbur Pender would have preferred the offense to put up a tremendous amount of points on a one-win South Granville program but he was more than happy to celebrate with his team in the post-game meeting.

“We like to make some things tougher than they should be,” Pender said. “With that being said, I’ll take the ugly wins over the pretty losses any day.”

Defense was a heavy point of emphasis for Pender and his staff in the days leading up to Friday’s game against South Granville.

Although Vance County was fresh off a 36-12 win over Carrboro, Pender was not happy with the effort on the defensive side of the ball and knew that his team would have to improve on their tackling and assignments if they wanted to stop South Granville’s triple option.

A refined and confident Vance County defense caused problems for South Granville through all four quarters. They came up with several big stops in crucial fourth down situations and ended up limiting South Granville to just one offensive touchdown.

“We played really well defensively,” Pender said. “I really liked the plan we came up with and the kids just executed it all night long. To hold [South Granville] to just 12 points is pretty tough to do for anyone but it’s a testament to how tough these kids played [on Friday].”

Even with the defense enjoying a dominant performance, inefficiency on offense was something that Pender knew might be a possibility after observing South Granville’s ability to blitz and stop the run.

With senior running backs Davion Vines-Holder and Carl Stephens III struggling to gain chunk plays on the ground, quarterback Nazir Garrett moved the chains by throwing the ball, with one screen going to Stephens for a 50-yard score.

Stephens also ended up finding the endzone on the ground while Vines-Holder maintained momentum from his stellar outing against Carrboro last weekend with another rushing touchdown.

Despite this, South Granville’s defense came up with several big plays to stay in contention, including a blocked punt that was returned for a touchdown. Vance County countered this efficiency by having freshman defensive end Taeshawn Alston and junior safeties in Isman Alston and Jayson Otts disrupt their opponent’s rushing and passing game.

Defensive dominance from each team culminated in the final drive that saw South Granville make their way to midfield before the offense stalled out in the closing seconds. Tense endings like that one have become a familiar experience for Vance County players and students at home.

The season began with Vance County narrowly holding off Warren County in the County Line Clash. Northern Durham almost left Henderson with a victory in Vance County’s first game back from a two-week COVID-19-induced quarantine until their final drive of the night ended in an interception at the last second.

Pender would like to see Vance County enjoy a dominant victory at home in one of their final two games in Henderson but said that the focus remains on building up the program’s already sturdy chemistry and fixing errors big and small on both sides of the ball.

“If we keep playing together, the games will take care of themselves,” Pender said.

Vance County will hit the road for the final time in the 2021 regular season next weekend when they travel to Stem to face a Granville Central team that has yet to win this year. The kickoff will take place at 7 p.m. on Friday night.