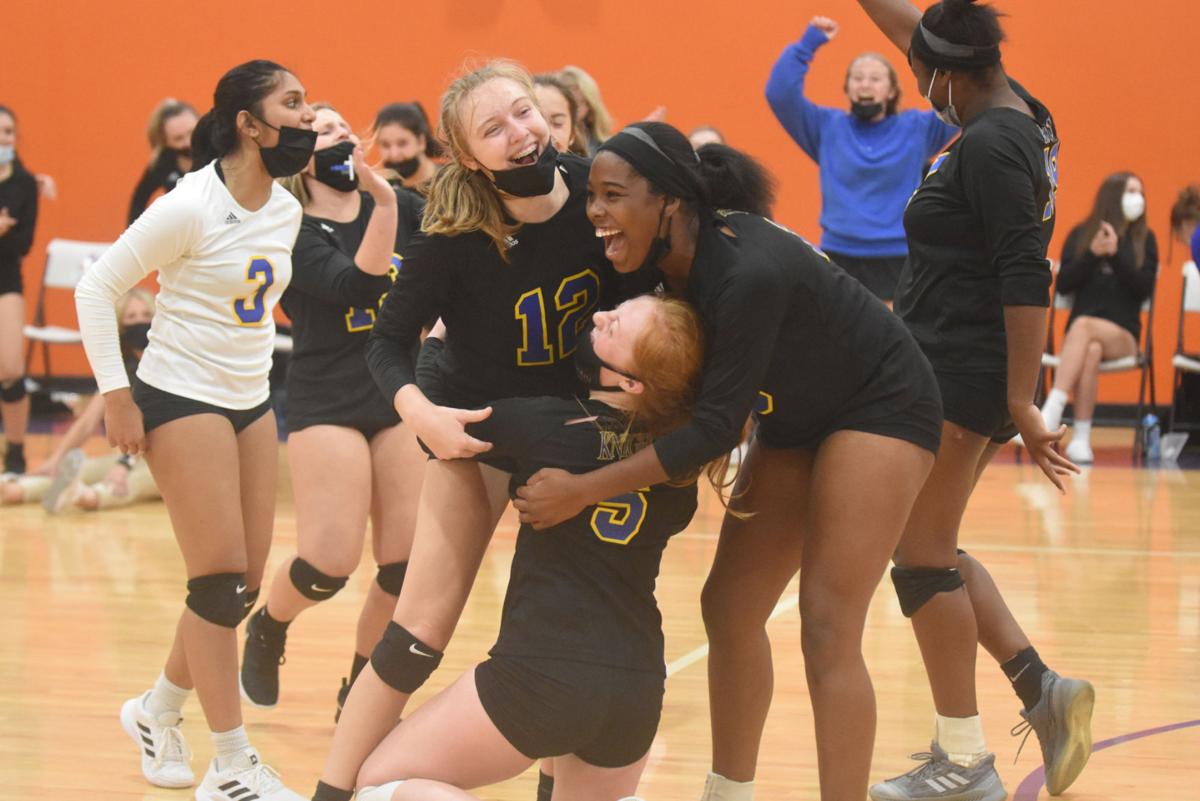 The Vance Charter volleyball team celebrates on the court after narrowly edging out Oxford Prep in a thrilling 3-2 match on Monday evening. Oxford Prep’s loss was their first of the 2021 season, while Vance Charter improved to 9-2 with the win. 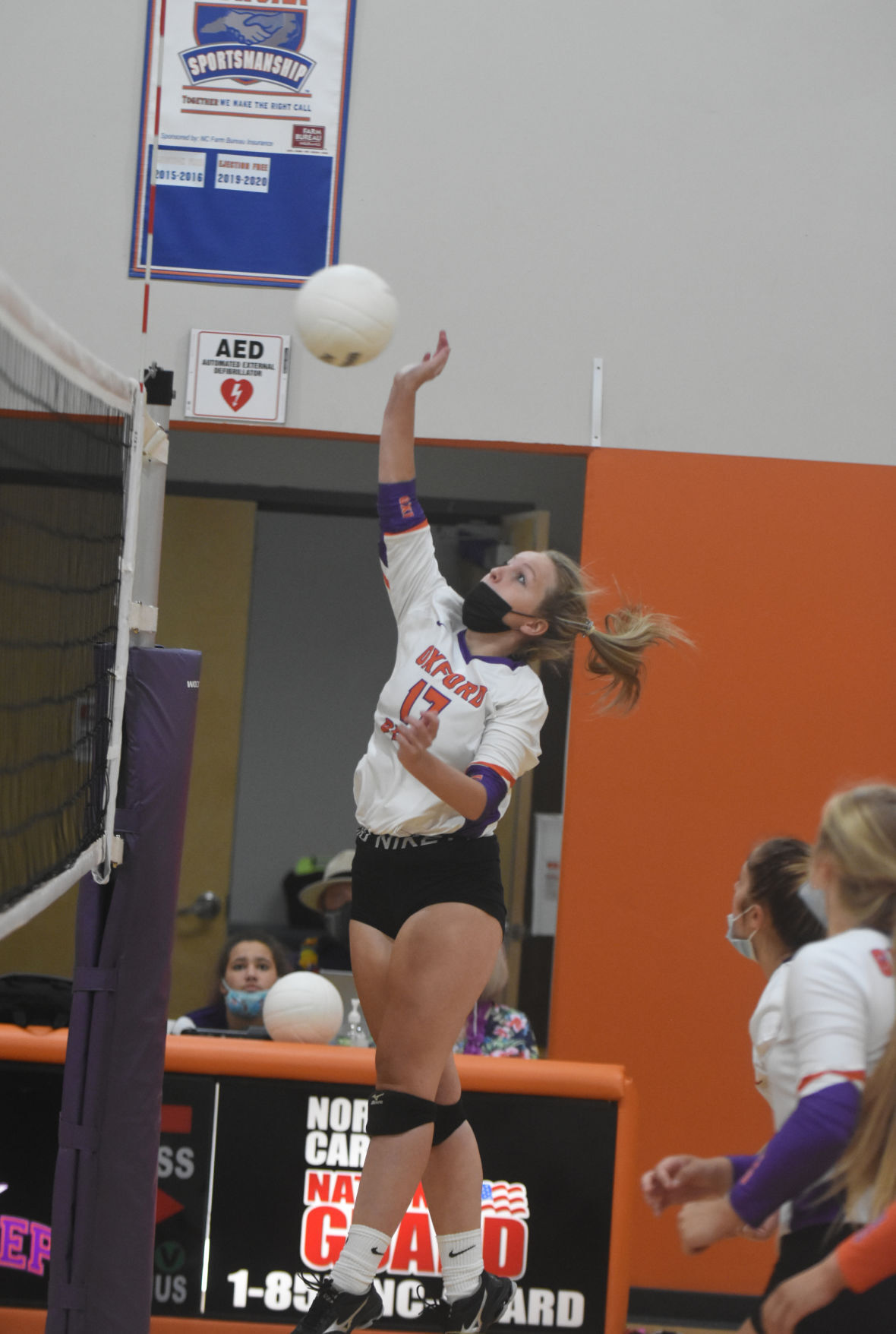 Oxford Prep volleyball player Emily Hobgood, center, sends the ball over the net during her team’s narrow 3-2 loss to Vance Charter on Monday evening, its first of the year.

The Vance Charter volleyball team celebrates on the court after narrowly edging out Oxford Prep in a thrilling 3-2 match on Monday evening. Oxford Prep’s loss was their first of the 2021 season, while Vance Charter improved to 9-2 with the win.

Oxford Prep volleyball player Emily Hobgood, center, sends the ball over the net during her team’s narrow 3-2 loss to Vance Charter on Monday evening, its first of the year.

OXFORD — The Oxford Prep volleyball team is undefeated no more.

A highly-anticipated for Oxford Prep against an 8-2 Vance Charter program on Monday was the slugfest that both sides expected, with Vance Charter prevailing in the fifth set following a late run.

With an electric atmosphere and an improved Oxford Prep program in front of them, Vance Charter head coach Anna Stallings knew the cohesion of her players would have to shine through if they wanted to return to Henderson with a victory.

“My girls have such a good bond and they work so well together,” Stallings said. “They have a lot of fight in them and a desire to play for each other. That always helps us whenever we get into tough situations like [Monday], but they are such a resilient group and I’m so proud of them.”

The intense but friendly rivalry between Vance Charter and Oxford Prep had higher stakes than usual on Monday with Oxford Prep having emerged as a favorite to make a deep playoff run.

Fresh off a brief playoff appearance in her debut season with Vance Charter, Stallings treated Monday like a postseason matchup and spent the weekend devising a game plan that would maximize the strengths of her players and keep Oxford Prep under constant pressure.

But for all the pressure Vance Charter supplied, Oxford Prep matched its opponent on offense and defense. The Knights got the start they were looking for by winning the first set, but a handful of inconsistent sequences enabled Oxford Prep to take a 2-1 overall lead.

Vance Charter took advantage of a slow Oxford Prep start in the fourth set to even up the score at 2-2. With the game on the line, Stallings reminded her players to avoid letting the pressure of the situation weigh on them, and to trust one another.

“I knew my girls could do this and I told them that in the huddle,” Stallings said. “They had to believe in themselves and believe in each other. I also told them to not get upset at their mistakes and to just move to the next ball. It was important for them to take everything one moment at a time.”

Abbott said that her team’s leadership, seniors Jane Faulkner and Zoe Holland, was crucial to keeping Oxford Prep composed all evening. But mistakes in the closing stages of the final set ultimately prevented the team from maintaining its perfect record.

“It was an amazing game on both sides,” Abbott said. “My girls came up with some big blocks and big hits, all while Vance Charter did the exact same thing. This was a back and forth battle, but I guess we gave up one too many unforced errors. We can learn from those and prepare for the next match.”

Abbott said Monday’s outcome does not take anything away from a season that’s seen several years of hard work by her and the players finally start to produce results.

She’s urged her players to enjoy the moment. She does not want them to overthink certain situations, but said that learning from the good and bad moments will be essential towards deciding how far Oxford Prep makes it in the postseason.

“Our goal was to never be undefeated,” Abbott said. “The girls need to take what caused us to lose and move forward in the right direction. We’re still in a great spot to move forward, but we need to get better on defense and not buckle under pressure because we were under a lot of pressure [on Monday].”

For Vance Charter, the victory over on Monday improved its overall record to 9-2 on the 2021 season and allowed them to overtake Oxford Prep in the Triangle North 1A standings. They now stand 4-0 in conference compared to Oxford Prep’s 2-1 record.

With a solid core of sophomore Ria Patel, junior Addison Rowan and senior twins Kyiah and Kayla Simmons, Stallings is confident that many more performances like the one against Oxford Prep are ahead of the Knights in 2021.

“This has been a really exciting season so far,” Stallings said. “We need to keep building and refining on what we are already doing. I want to keep this team close and make sure the girls maintain the fight they’ve been showing.”

Vance Charter and Oxford Prep both wrapped up their weeks on Wednesday. Vance Charter visited Eno River for a 6 p.m. matchup, while Oxford Prep made a short drive north to battle Henderson Collegiate at 5 p.m.