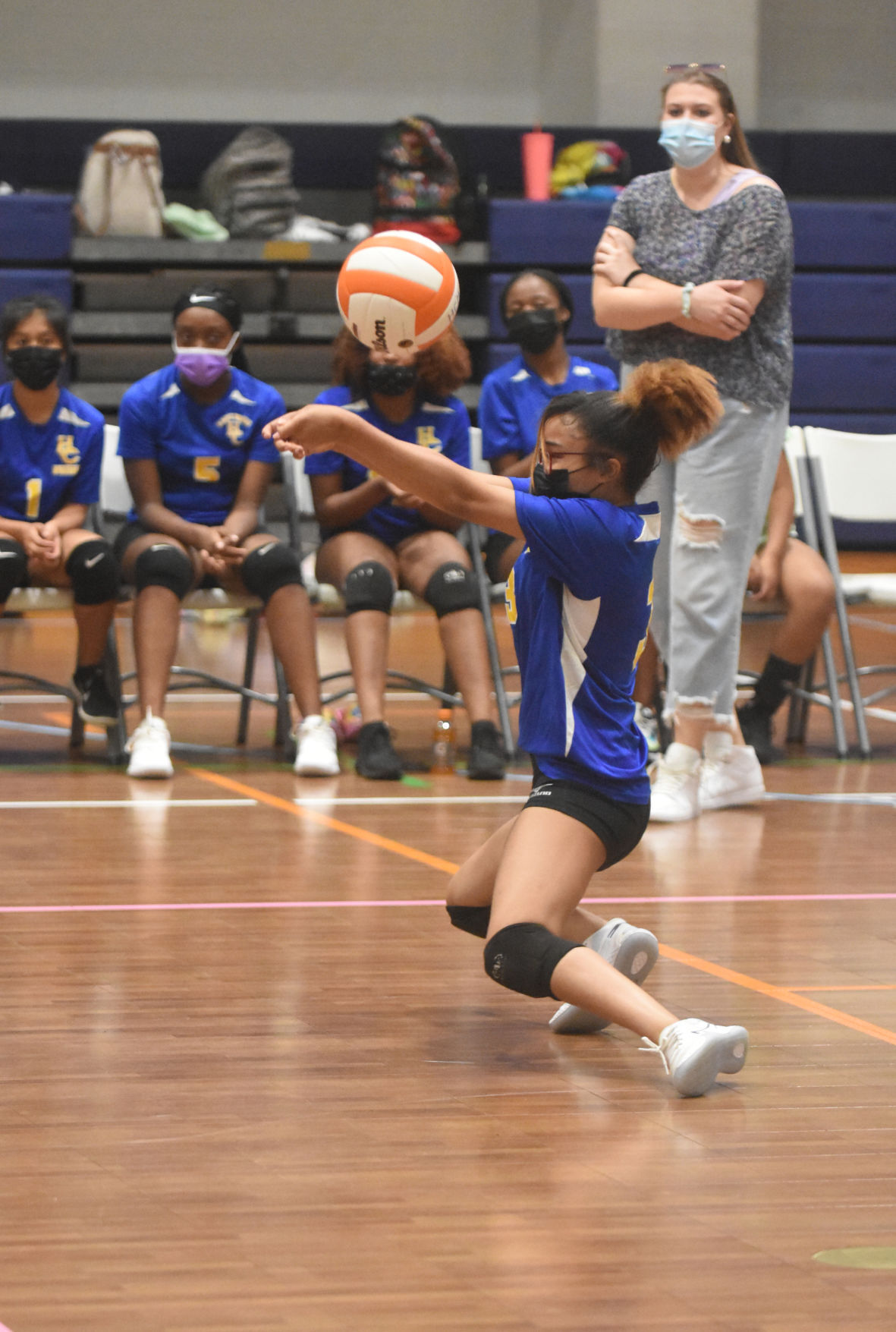 Henderson Collegiate volleyball player Latoya Stephens (center) dives for the ball while head coach Lauren Dennis looks on during her team’s 3-0 loss to Oxford Prep on Monday night. Henderson Collegiate failed to win a single game in 2021 but Dennis is confident that victories will start coming the program’s way next year. 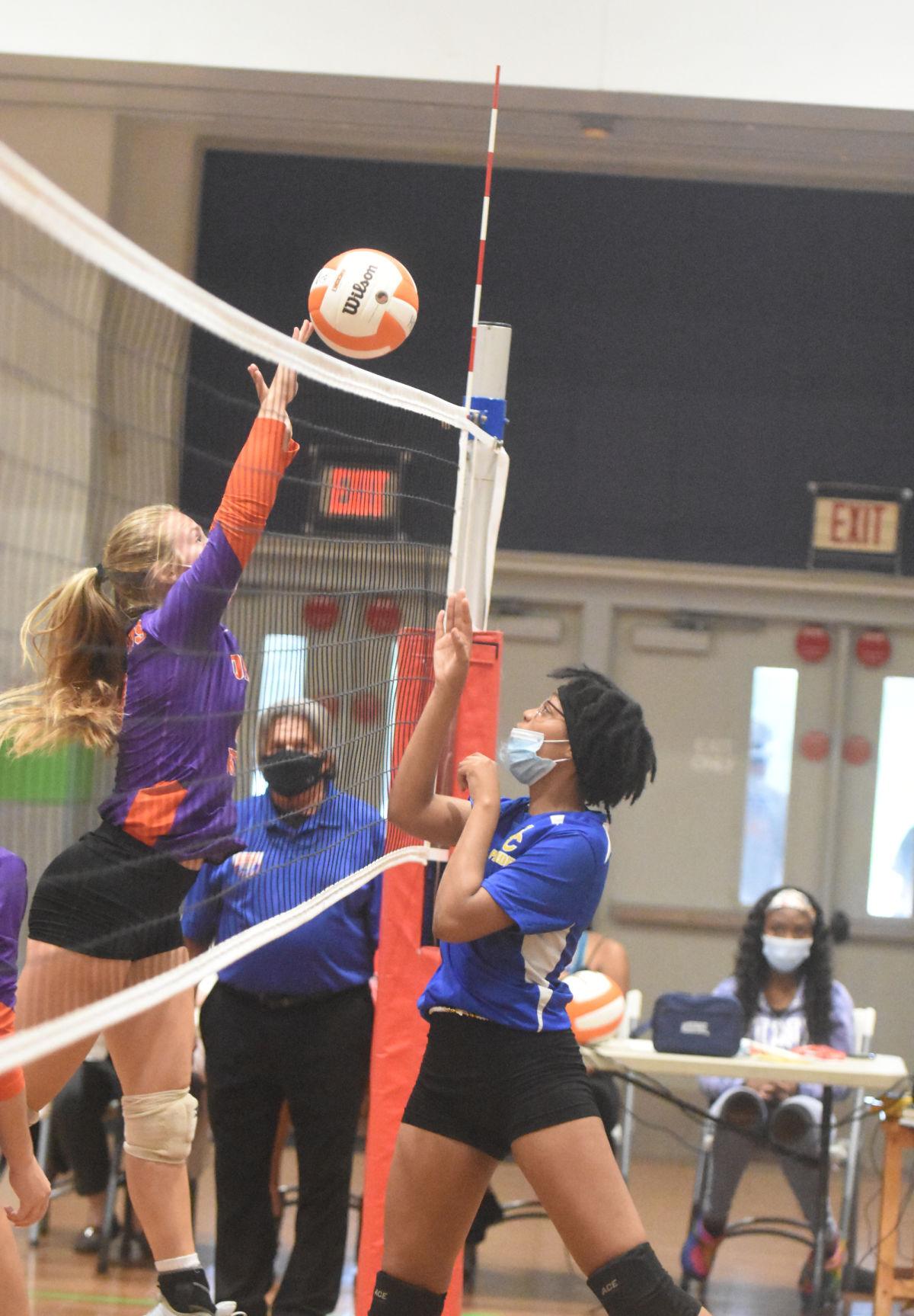 Henderson Collegiate volleyball player Shania Pugh (center) gets into position as Oxford Prep’s Jane Faulkner knocks the ball back over the net during Henderson Collegiate’s 3-0 loss on Monday evening to close out the regular season.

Henderson Collegiate volleyball player Latoya Stephens (center) dives for the ball while head coach Lauren Dennis looks on during her team’s 3-0 loss to Oxford Prep on Monday night. Henderson Collegiate failed to win a single game in 2021 but Dennis is confident that victories will start coming the program’s way next year.

Henderson Collegiate volleyball player Shania Pugh (center) gets into position as Oxford Prep’s Jane Faulkner knocks the ball back over the net during Henderson Collegiate’s 3-0 loss on Monday evening to close out the regular season.

HENDERSON — The 2021 regular season for the Henderson Collegiate volleyball program ended on Monday evening the same way it began: with a loss.

No wins were tallied by Henderson Collegiate through the duration of their 2021 season but head coach Lauren Dennis said the team’s final record was nowhere near indicative of the improvements they made from August to October.

Their performance against Oxford Prep on Monday showcased some of those strides for Dennis.

“We weren’t expecting a victory but it’s always a great compliment when teams come up and say how much you’ve improved from Game 1 to Game 2,” Dennis said. “The third set was the one we were really proud of and it was a good celebration for our lone senior in Latoya Stephens.”

After scoring a combined total of 13 points across the first two sets, Henderson Collegiate opened the final set of the evening determined to challenge Oxford Prep.

Henderson Collegiate took advantage of a handful of errors from their opponent to briefly hold a three-point advantage before Oxford Prep regained their cohesion and pulled away for their 17th victory on the year.

Even though the final score was identical to Henderson Collegiate’s first game with Oxford Prep, they ended up doubling their point total in the third set from that matchup.

Oxford Prep head coach April Abbott took note of that third set score and commended Henderson Collegiate for challenging her players to close out the game.

“[Henderson] Collegiate played so much better than they did the first time we met them,” Abbott said. “I was actually impressed with the difference, which was frankly day and night. They have made some huge improvements.”

Dennis said that having stellar in-conference competition from local teams like Oxford Prep and Vance Charter helped give her young players an idea of what is expected in order to take the next competitive step both physically and mentally.

Leadership from within Henderson Collegiate was also a crucial part of the program’s development for Dennis, which she hopes remains a key focal point for the program as they look to start winning games again next season.

“This was a growth year,” Dennis said. “We pretty much had all freshmen and sophomores on the team, with only a handful of upperclassmen on the team. They were all really good models and they did really well to compete in an elite conference for a team that should have been competing at the JV level.”

Along with Stephens being one of the most vocal leaders of the program, Dennis also singled out Ahniya Cates and Jannesa Brown as players who have emerged as key contributors at Henderson Collegiate through the rebuilding process.

Cates admitted that going winless for a second consecutive season is frustrating but said that 2021 taught plenty of valuable lessons regarding character on and off the court, all of which she intends to use in order to keep making more improvements to her game.

“This season really taught me how to come in and be ready to play,” Cates said. “You had to put all goofiness aside and just be focused. Everyone has to be committed to the game and embrace any challenge on the court if we want to start winning games.”

Cates is carrying high expectations entering her senior year as she looks to guide Henderson Collegiate towards at least securing their first win since defeating Triangle Math & Science 3-0 back on Oct. 7, 2019.

Stephens is the only member of Henderson Collegiate’s roster that will not be returning in 2022 as an outgoing senior. She has cherished the memories created alongside her teammates despite going winless the last two years but she believes that Henderson Collegiate is positioning itself to finally break that drought next fall.

“I’ve really enjoyed being at Henderson Collegiate,” Stephens said. “This team has really grown during my time and I’ve done what I can to help them grow. I’m really excited to see what they do next year.”

Experience is something that Dennis knows will be beneficial for her players as they continue to build a culture at Henderson Collegiate that she believes will gradually turn the volleyball program into one of the most competitive teams inside the North Central 1A Conference.

“To see freshmen and sophomores stepping up and getting their first rotations was really rewarding,” Dennis said. “We’ve pretty much been using a senior-only team every year and developing the younger girls but I’m really excited to see what they do next year and the year after that.”