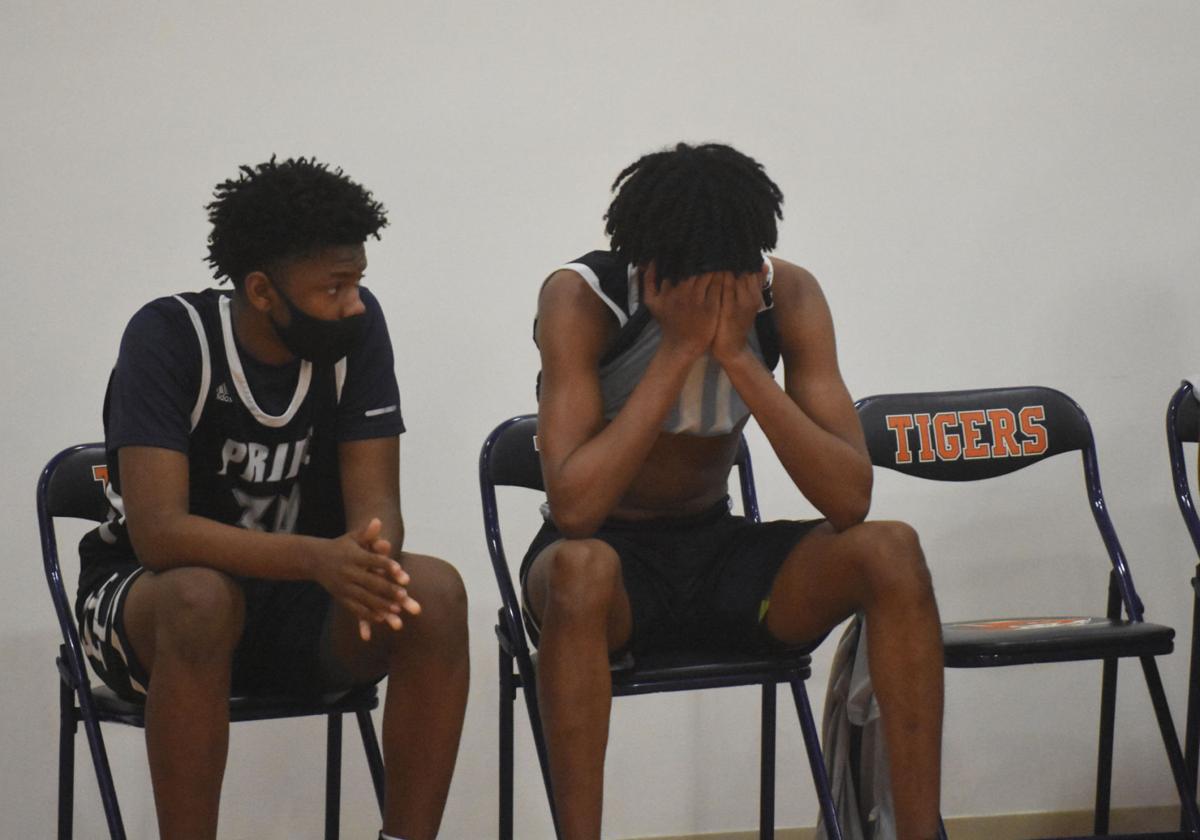 Henderson Collegiate basketball player Akhiris Holden (center) reacts on the sideline while his teammate Presley Hunter (34) looks down the court during the closing seconds of their team’s 68-58 loss to Wilson Prep in the NCHSAA 1A Elite 8 on Saturday night. 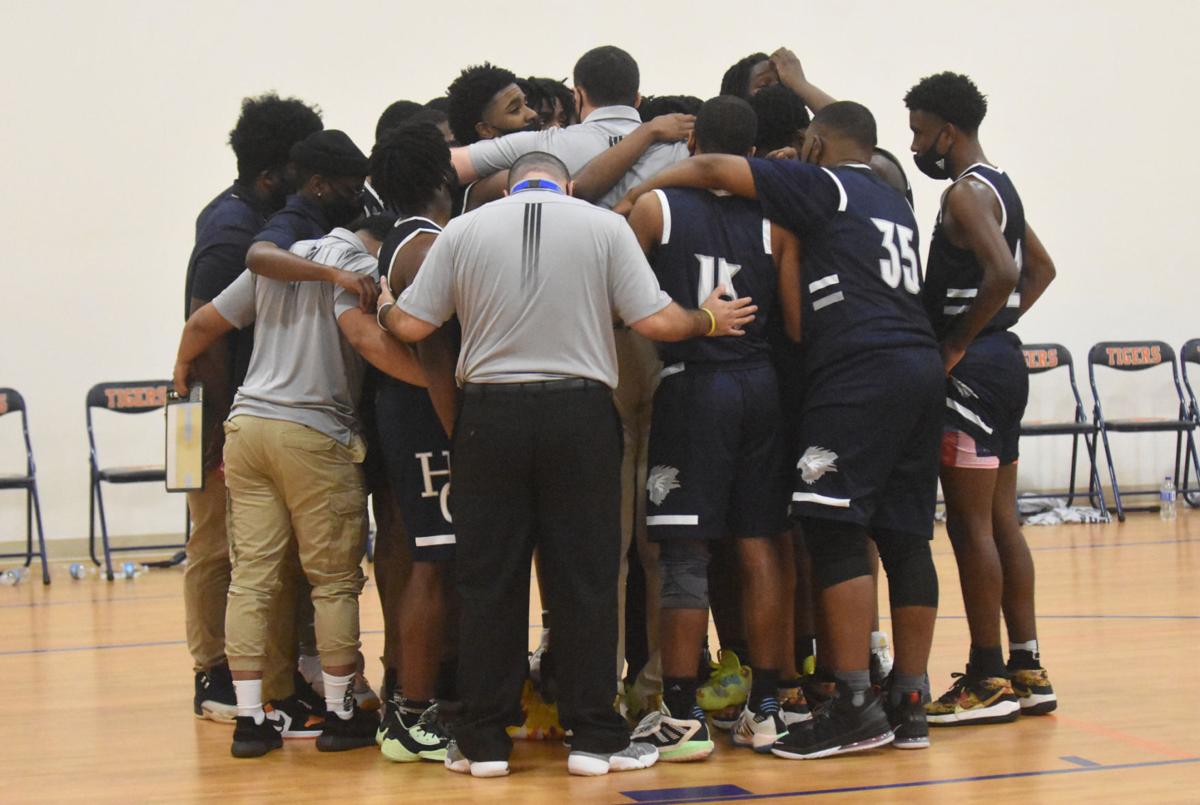 The Henderson Collegiate basketball team consoles one another during the closing seconds of their 68-58 loss to Wilson Prep in the Elite 8 of the NCHSAA 1A Playoffs Saturday evening.

Henderson Collegiate basketball player Akhiris Holden (center) reacts on the sideline while his teammate Presley Hunter (34) looks down the court during the closing seconds of their team’s 68-58 loss to Wilson Prep in the NCHSAA 1A Elite 8 on Saturday night.

The Henderson Collegiate basketball team consoles one another during the closing seconds of their 68-58 loss to Wilson Prep in the Elite 8 of the NCHSAA 1A Playoffs Saturday evening.

WILSON — For three quarters in their Elite 8 matchup with Wilson Preparatory Academy on Saturday evening, it appeared that Henderson Collegiate would withstand an intense assault and punch its ticket into the NCHSAA 1A Final Four for the third consecutive.

Those hopes evaporated in the fourth quarter as Wilson Prep knocked down several crucial baskets that gave it a 68-58 victory and brought a challenging season for Henderson Collegiate to an abrupt end.

Head coach George Marshall commended his players for all of the hard work they put into a year dominated by uncertainty due to the COVID-19 pandemic, and believed that the conclusion of the game simply came down to Wilson Prep using its strengths as a program.

“All of the credit in the world goes to Wilson Prep,” Marshall said. “Their size is really imposing and that’s something they need to keep using over and over again. Our first half was great, but I think I needed to do a better job of running set plays at the end of the game because we took a lot of rushed shots.”

With Henderson Collegiate facing an energized Wilson Prep in front of their exuberant home crowd, Marshall ensured that his players would be aggressive early on by having them drive to the rim early and draw several fouls.

Marshall’s strategy paid off with the Pride getting frequent trips to the free-throw line, but they repeatedly failed to capitalize on the opportunities to pull away, as they only converted one of their first 10 free-throw attempts.

Although the inefficiency at the free-throw line helped Wilson Prep build an advantage, Marshall did not think it significantly impacted the game and that the intensity his players provided helped them overcome those issues as the game progressed.

“That kind of stuff happens,” Marshall said. “You’re nervous and it’s a big game, so that can definitely take place. You would obviously like to see a few more of those go in, but at the end of the day, this was a situation where our guys just played [hard], and I think the juniors can use this as motivation going into next year.”

Henderson Collegiate found its rhythm late in the first quarter and proceeded to trade numerous baskets with Wilson Prep. The Pride gradually started to gain the upper hand and entered the locker room at halftime up 31-28.

The slugfest continued into the third quarter with Wilson Prep erasing the Pride’s five-point, only for the defending champs to respond by draining several more baskets that once again gave them a small, but comfortable lead.

As the third quarter began to wind down, Wilson Prep gradually leaned on its senior class — Nasiar Blackston, Eric Wynn and Devyn Bullock — to navigate around Henderson Collegiate’s defense and put their team in a position to take complete control of the game.

Blackston would be the one to shift momentum into Wilson Prep’s favor, as he knocked down a deep, contested three from mid-court as time expired in the third quarter to give his team a 50-45 lead and ignite the Wilson Prep bench and home crowd.

Wilson Prep’s offense came to life following the shot and began attacking the rim from every angle while Henderson Collegiate failed to provide a proper answer. A manageable five-point deficit quickly grew to 12 in only a few minutes.

Nothing would go right for Henderson Collegiate until Wilson Prep substituted their starters out of the game with a few minutes remaining. Marshall elected to have his underclassmen handle the final possessions while the eight dejected Henderson Collegiate seniors watched as their time with the program came to a close.

Marshall said the leadership of the seniors was crucial in helping keep everyone motivated during the pandemic, and knows that their maturity and efficiency both on and off the court are going to benefit them as they start college.

“Now our biggest priority is making sure that the seniors are taken care of,” Marshall said. “All of them are on track to graduate, so now we have to help set them up with going to a four-year college. For those that want to play at the next level, we need to find them the right fit and make sure they are in a position to grow as young men.”

As one chapter in Henderson Collegiate’s emergence into a championship contender comes to a close, Marshall affirmed that the program’s success would not have been possible without his seniors buying into his system of fast, selfless basketball, and that their accomplishments will always be remembered within Vance County’s high-school sports culture.

“This is the best basketball class in the history of our county by far,” Marshall said. “They went to the state championship two straight years, they are three-time conference champions and they went to three straight Elite 8s. The school’s leading scorer, rebounder and assister are in this class, and in the last three seasons, they have a 67-16 overall record. There’s nothing else that needs to be said.”

Marshall plans to start preparing for next year as soon as he can, and is expecting the next group of seniors to carry on the legacy left behind by this year’s class — Javonte Waverly, Akhiris Holden, Davon Allen, Khris Franklin, Omahj Evans, Kaleb Royster, Caleb Perry and Jashea Hart.