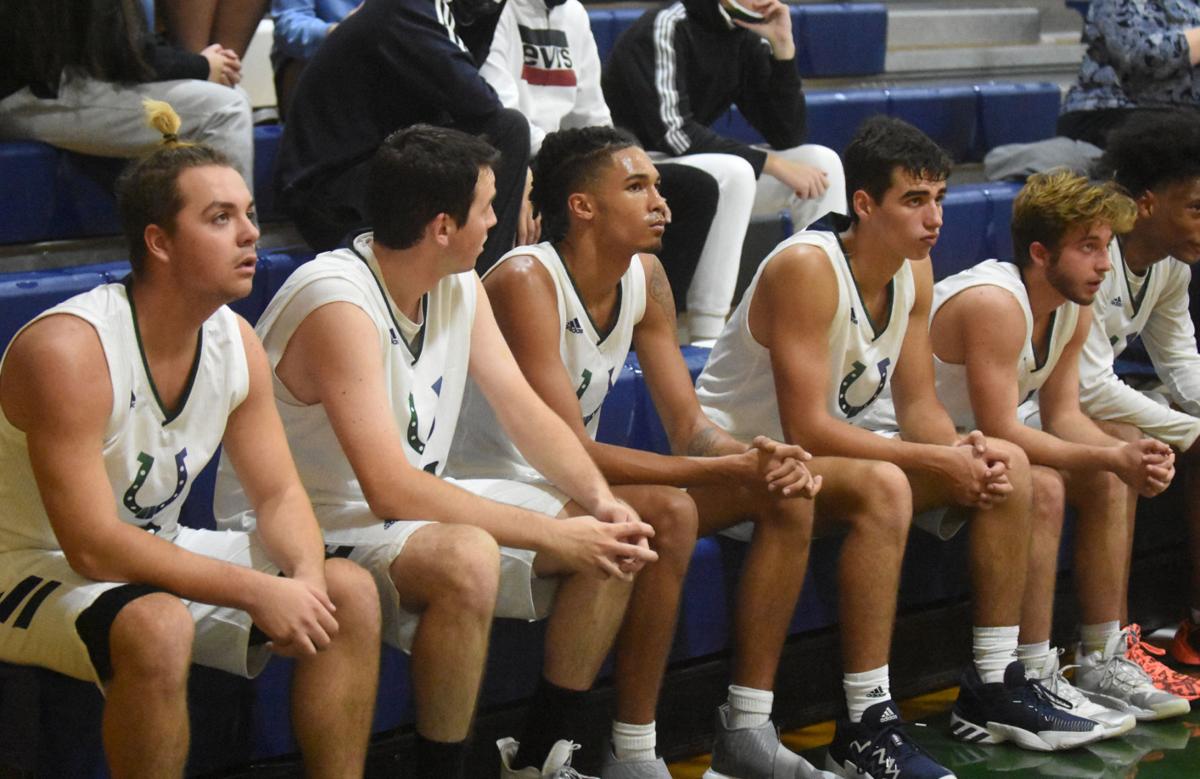 A dejected Crossroads Christian bench can only look on as Alamance HomeSchool eviscerates its team’s offense and defense during the final minutes of their 80-50 loss at home on Tuesday evening. 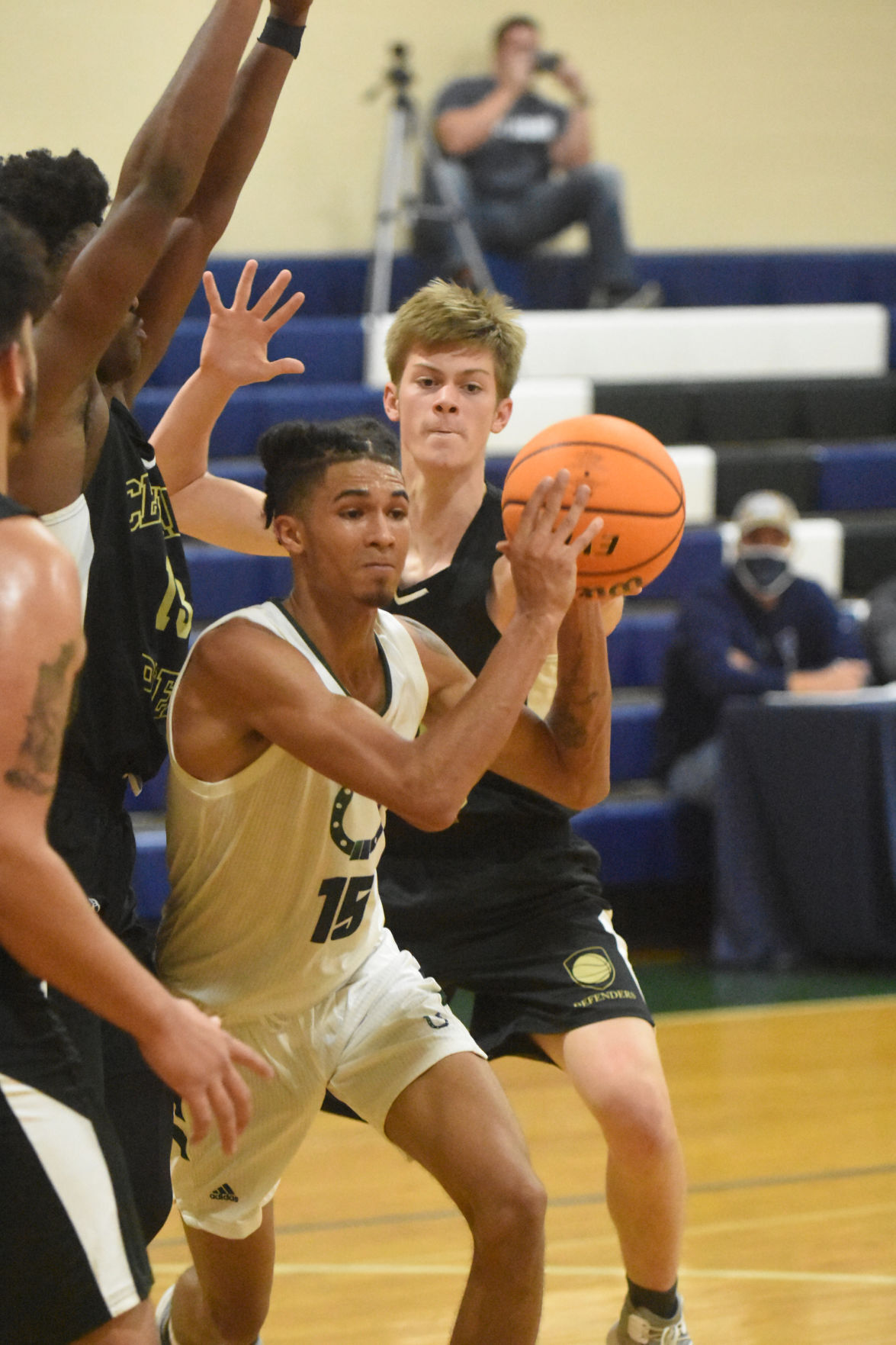 Crossroads Christian basketball player Drew Rogers (center) is surrounded by Alamance HomeSchool defenders as he attempts to generate offense for his team during their 80-50 loss Tuesday evening.

A dejected Crossroads Christian bench can only look on as Alamance HomeSchool eviscerates its team’s offense and defense during the final minutes of their 80-50 loss at home on Tuesday evening.

Crossroads Christian basketball player Drew Rogers (center) is surrounded by Alamance HomeSchool defenders as he attempts to generate offense for his team during their 80-50 loss Tuesday evening.

HENDERSON — Nothing went according to plan Tuesday evening for the Crossroads Christian men’s basketball team, which put together one of their worst performances in head coach Scottie Richardson’s tenure with an 80-50 loss to Alamance HomeSchool.

Richardson was not pleased with the way his players conducted themselves as Alamance dominated them in every portion of the game, and could only sum up Tuesday’s contest with one word.

“Embarrassing,” Richardson said. “We didn’t come out ready to play and we seemed fatigued for whatever reason, so that limited us with what we wanted to defensively. This was just a poor performance and we have a lot of work to do.”

Fresh off two lopsided, but competitive losses to talented programs in Cape Fear Christian Academy and Berean Baptist Academy, Richardson entered the first home matchup of the year confident CCS would bounce back despite not having senior Asher Fulk, who was sidelined by an injury.

Problems began to emerge for CCS in the first quarter when several open looks failed to go through the net. Alamance initially had the same issue, but began to find open lanes and drive to the net, giving them a 16-11 advantage.

Defense remained an issue for CCS in the second quarter until Richardson was able to make some adjustments that allowed them to clamp down on Alamance’s scoring. CCS trimmed their deficit to two points at halftime and entered the third quarter with some momentum.

CCS failed to sustain the energy they accumulated near the end of the first half and immediately surrendered several points with Alamance dominating them under the rim. Not even a technical foul on Alamance head coach Altareit Miller benefitted CCS, who suddenly found themselves down 44-36 with eight minutes remaining.

While Richardson was upset about CCS’ offense and defense, he voiced the most frustration on his team’s inability to grab rebounds and intends to rectify that issue before his players embark on their next game Friday evening.

“I told my staff that we were probably going to spend 45 minutes to an hour in the next practice on just boxing out,” Richardson said. “That was terrible all night, but we were 3-16 from 3-point range in the first half, yet only down two points. If you make a couple of those, it’s a different story.”

Every problem that plagued CCS in the first 24 minutes festered during the final quarter, as Alamance took advantage of an inefficient CCS offense and bulldozed through their opponent’s defense to pull away with a 30-point win.

With the starting lineup struggling throughout most of the evening, Richardson did offer praise to those who were able to generate offense and defense on a catastrophic evening, adding that having an efficient rotation will be crucial as he and his staff try to figure out how to maximize the program’s potential going forward.

“We lost composure and that’s not what we do here,” Richardson said. “We are built to have that next-man-up mentality and rotation perfection is one of our goals. The next guy has to be ready to play, but [Jayden White] and [Will Alston] did step up, so some of the veterans are going to have to work their way back into the lineup.”

Now 0-3 on the year, CCS will try to shake off Tuesday’s lopsided defeat when they host United Faith Christian Academy on Friday at 7 p.m.